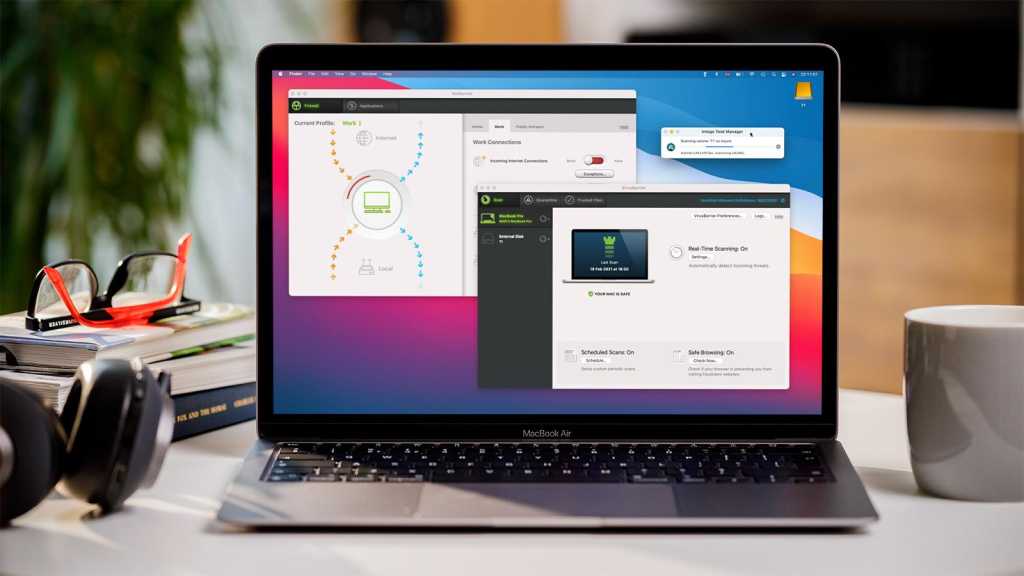 Image: Intego
At a Glance

A useful set of security utilities that help keep your Mac safe and running smoothly.

Intego’s Mac Internet Security X9 is a bundle of two security tools: VirusBarrier X9 and NetBarrier X9. The job of the first is self-explanatory but the second is a two-way firewall, a component you don’t often see included with security software at this sort of price.

Together they promise a high level of protection against direct and indirect unwanted software and malware threats.

You can also purchase Intego Mac Premium Bundle X9 for £39.99/$39.99 for the first year (with a normal retail price of £84.99/$84.99). This includes other tools such as the Mac Washing Machine X9 system cleaning app, ContentBarrier XP for parental control, and Personal Backup 10.9.

Installation is reasonably simple and you can choose one or both of these tools. As they work at a fairly low level in your system you will need to grant full authorization and disk access, but you’re walked through these steps.

Once VirusBarrier is installed you’re asked to pick your level of coverage. The options are Minimum, which looks for Mac-specific threats and malicious scripts; Standard, which monitors emails and looks for threats for any platform; and Maximum, which adds scanning of attached iOS devices. You can pick and choose the details whichever level you select as these three options are essentially shortcuts to different sets of configurations.

Intego Mac Internet Security X9 is our number one pick in our roundup of the best Mac antivirus software. You can also read about other packages we’ve reviewed in that test.

What VirusBarrier X9 does is fairly comprehensive: it can scan every file on any connected disk, including within compressed archives, and it can scan emails and connected iOS devices.

Any suspicious file it spots will be quarantined, and these can then be marked as trusted, left quarantined or a repair attempt can be made. Repairs may leave the original file usable or it may remove all its data if it’s entirely malware, but it did a sterling job of finding threats on our testbed Mac.

Malware definitions are updated frequently. You can have these installed automatically or just be notified when an update is available.

Performing a complete hard disk scan will take a fair while the first time this is run. How long this is exactly depends on the size of your disk and the number of files and compressed archives that need to be examined; from 30 minutes to over an hour proved to be quite normal. Performance wasn’t noticeably affected in our tests, but if that happens to you there’s a ‘low priority’ scanning choice in its preferences to reduce its processor use.

That makes scanning take longer, but it’s there as an option. Further scans are just on new items and generally take a minute or less to run.

For ongoing protection VirusBarrier will monitor for new volumes being mounted and optionally scan them automatically, and you can drag volumes, folders and individual files into the main window for spot checks.

VirusBarrier caught all our malware and ‘uninvited software’ samples including ones for other platforms. We were also warned when we opened a disk image with a malicious installer.

Results from AV-Test, an independent malware testing lab, were similar to ours, and it saw no false positives (the flagging of legitimate software as malicious). The UK’s SE Labs and AV-Comparatives in Germany haven’t yet tested this version of Intego’s software.

Intego NetBarrier is the other part of the Internet Security suite. This proved very effective at monitoring and flagging all attempts to communicate out as well as in; it’s a two-way firewall that monitors for ‘phone home’ attempts as well as intrusions.

You’ll be surprised at how much of this network chatter goes on. Adobe Creative Cloud was expected, but even Apple’s Pages wanted to have remote conversations. The vast majority of this is entirely legitimate, but attempts are flagged and you can choose whether to allow them or not.

We wished there was background information on the connection attempts; sometimes process names can be decidedly alarmingly named despite being kosher. Having said this, the configuration options are really clear, and once you’ve sorted out what you’re happy to give a free pass to it’s a very useful and actually unobtrusive networking safety tool.

If you have multiple Macs, don’t worry: you can select 3 or 5 devices at the checkout, and it doesn’t cost much more, and it also makes Intego better value per Mac. Plus you can also choose to get two years of protection at an even more discounted price.

As well as the core VirusBarrier and NetBarrier utilities this bundle includes three other tools as well: Mac Washing Machine X9 (for removing clutter and optimising your Mac’s performance), ContentBarrier X9 (for tailored user access restrictions to inappropriate content), and Personal Backup 10.9. The backup utility has benefits not offered by Time Machine, including scheduled backup times and file synching between two Macs. You should all have Time Machine set up anyway, but this is worth adding to your safety net.