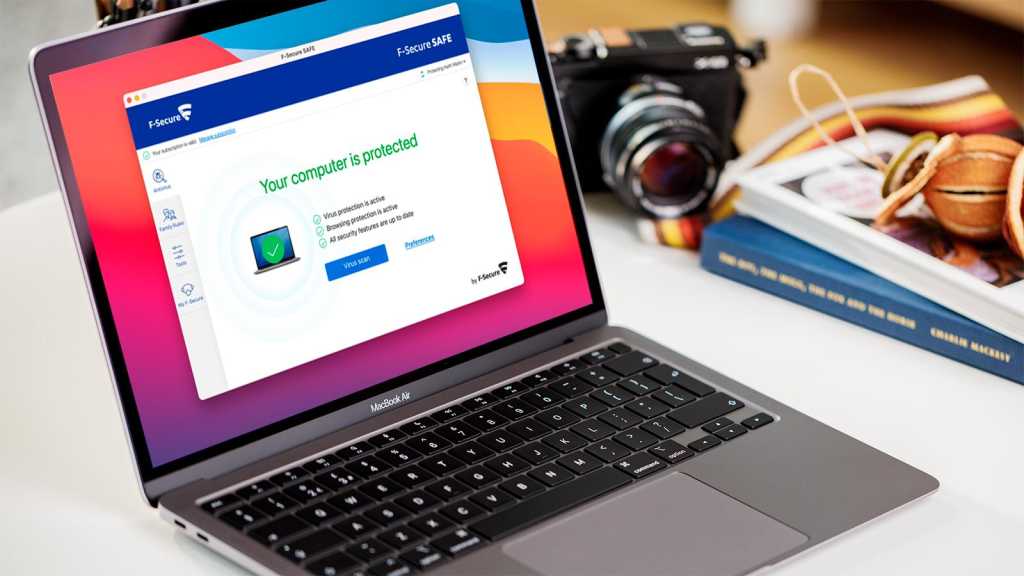 F-Secure Total is a security software suite that works on macOS, iOS, Windows and Android devices and protects your data from a wide range of threats, from search engine hijack attempts through to actual malware. It does this well, although it has weak spots and a relatively high price.

F-Secure Total is a security tool dedicated to keeping your Mac and your data safe from all kinds of digital threats. It’s available for macOS, iOS, Windows and Android devices, and the subscription can cover one or more devices.

F-Secure has no issue with you protecting devices belonging to other people, although of course it’s all managed through your own account.

Strictly speaking, F-Secure Total is three separate software utilities in one bundle. The first of these is F-Secure Safe. This is the key part of the package as it is where you manage, configure and run manual and automatic scans for unwanted software. 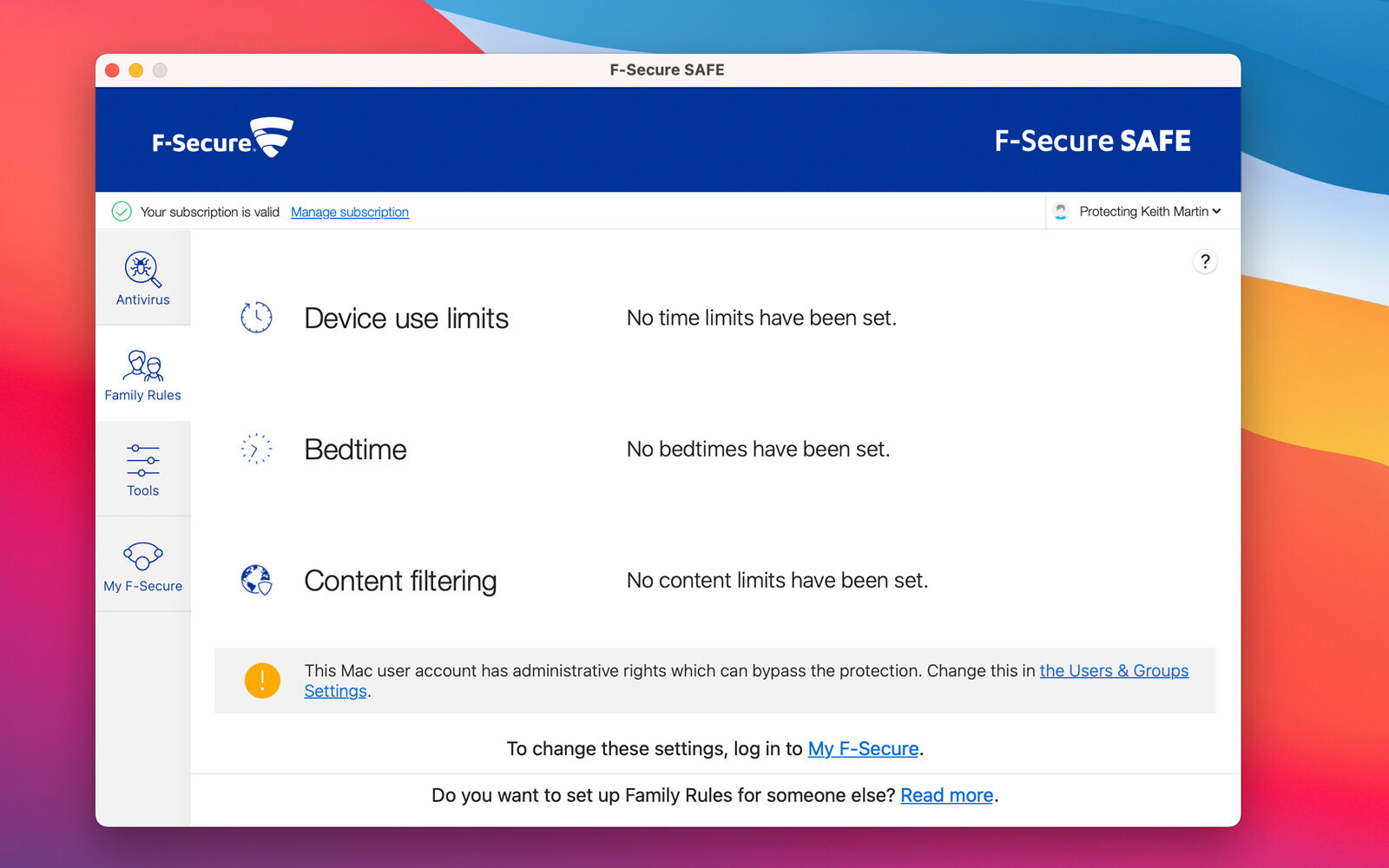 It also contains has a section called Family Rules for managing family use of your Mac, something some may find a useful extra. The content filtering side of this has similarities to Intego’s ContentBarrier X and to Norton 360’s Parental Controls, but it adds time limits and bedtime controls to the mix.

The second product is F-Secure Freedome, a VPN to secure network traffic and keep your communications encrypted. Finally, ID Protection provides a password manager and monitors for data breaches involving your email details.

Virus scanning can be run manually from the Safe utility. This goes through your entire Mac, which in our test system took about two hours. A separate option lets you choose which folder or files to scan and is useful if, for example, you just want to check a USB memory stick.

This is in addition to real-time scanning that monitors file activity. 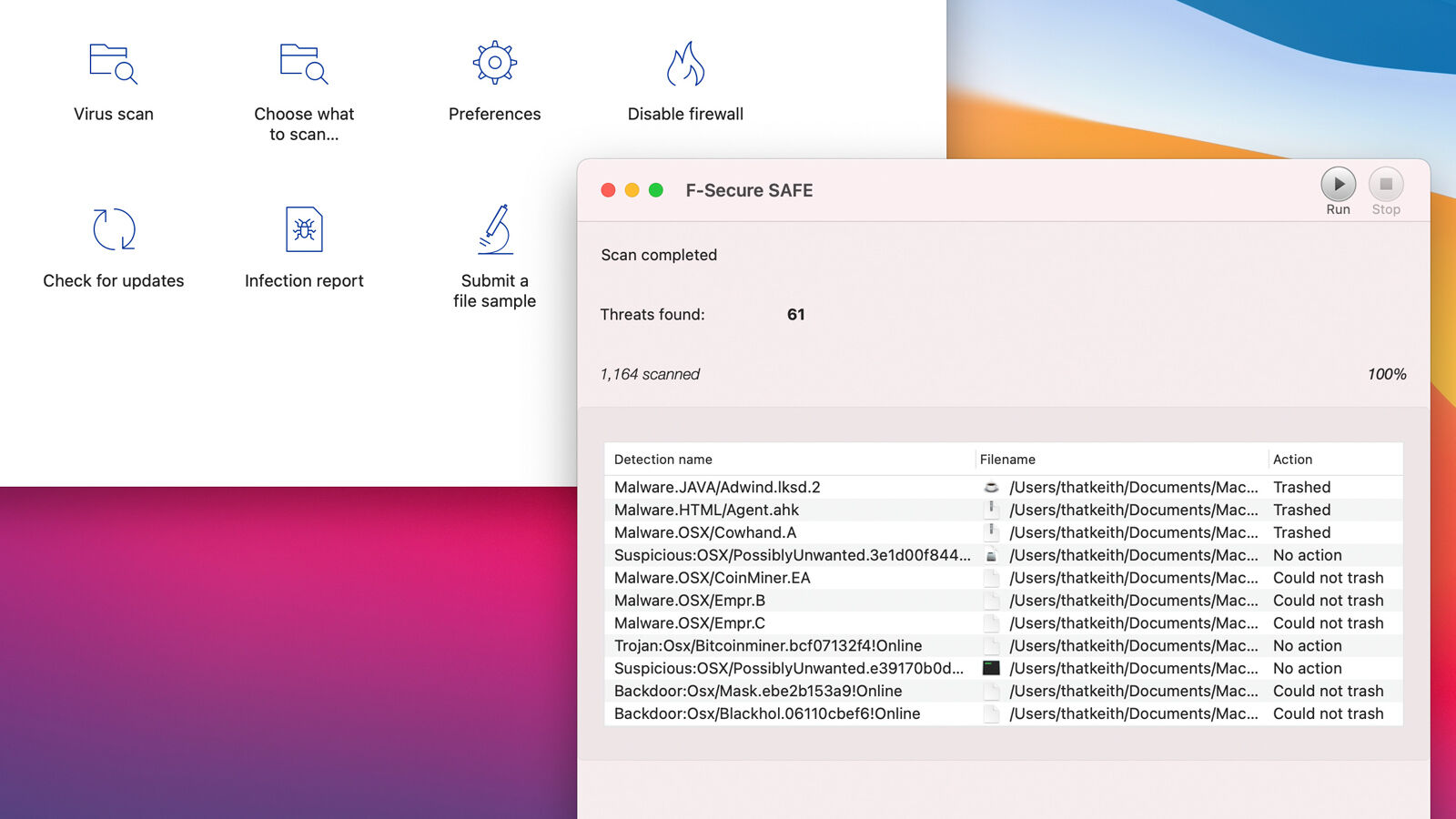 Like many security tools, F-Secure Safe doesn’t look inside zip archives or disk images, but files are checked the moment those are expanded. It found all our potential threats and unwanted software samples without fuss, flagging items and where possible moving them to the trash.

In use there was a moderate level of performance impact on general file reading and writing and software launching. This wasn’t dramatic, but it was certainly enough to be noticeable in day-to-day operations.

If that becomes a problem at any point background file monitoring can be temporarily disabled for five minutes, ten minutes or an hour, which is a better option than turning it off entirely.

Independent lab AV Test came to similar conclusions. In its most recent report, it found that F-Secure Safe caught 99.7% of malware (the industry average being 100%) and that it caused a noticeable slow down: 26% slower copying of files, 11% slower launch of apps and 33% slower installation of apps.

Some of the preferences for the F-Secure Total suite of tools are presented as a new pane in System Preferences, although these are mostly about turning certain features on and off.

Controls to do with features that work across multiple devices or user accounts are managed from dedicated web pages rather than this System Preferences pane.

The Family Rules part of F-Secure Safe won’t be relevant to everyone, but for a shared Mac of any kind it can be useful to have some system-level restrictions. Of course this must be done with separate user accounts on the Mac so those users can’t alter these settings.

Ultimately, though, these parental controls aren’t well thought out and you really only define how long and when a child can use the Mac: not what they can use it for. 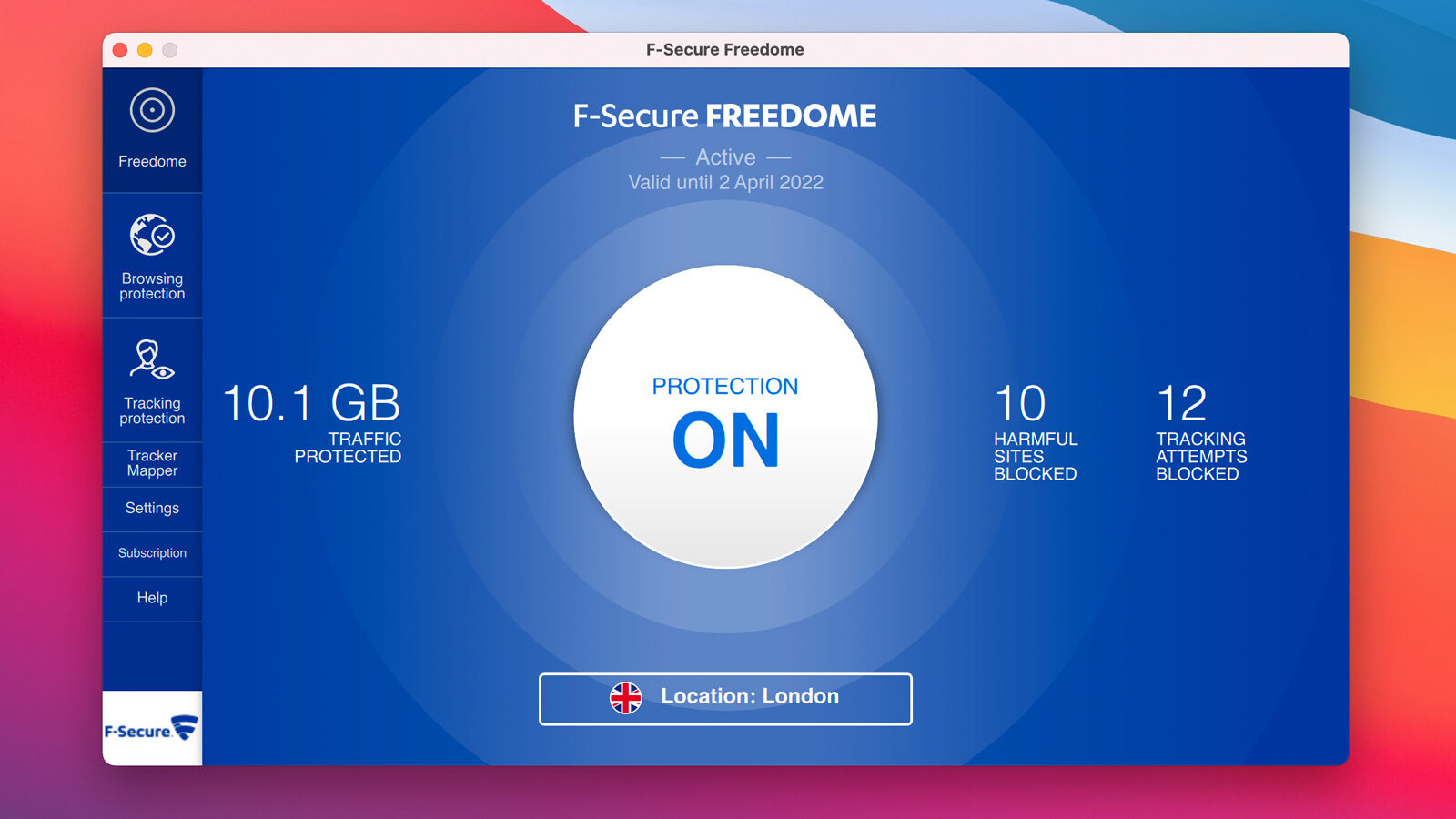 It’s almost a similar story with Freedome VPN. On the plus side, it’s very easy to use: there’s one big on/off button and a selection of server locations to choose from. The main panel also shows a running total of how much data has been pushed through its encrypted servers, plus a count of the number of ‘harmful sites’ and tracking attempts that have been blocked.

It performed well in speed tests, but overall it’s a ‘no-frills’ service and has very few location options outside of Europe and North America. If you’re looking for configuration options and controls it will disappoint, but as a bundled part of F-Secure Total it’s still useful.

ID Protection manages passwords and payment card details in a simple browsable interface. It’s able to autofill usernames and passwords in Chrome and Firefox, but Safari users will have to copy and paste data. 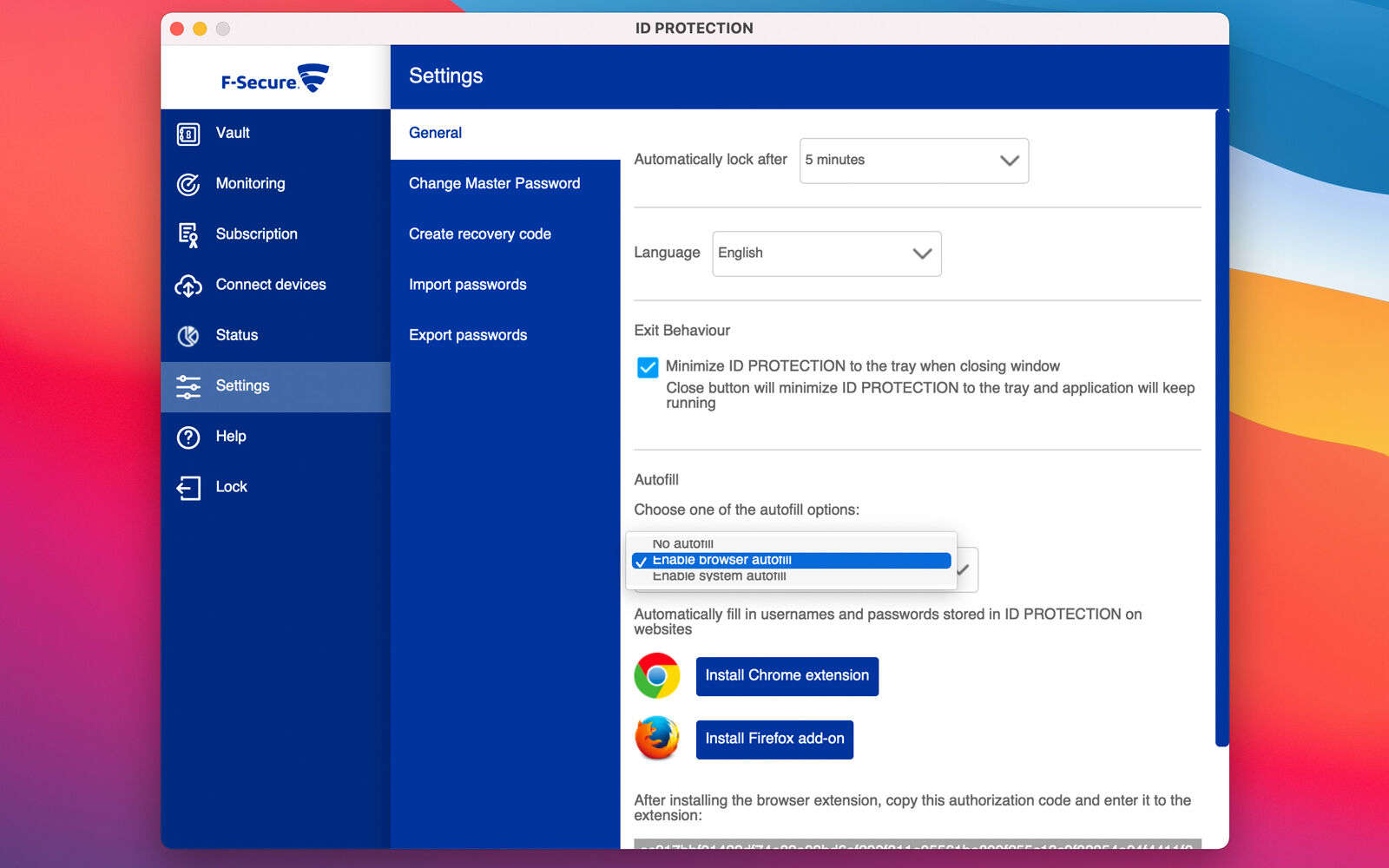 This makes it a lot less user-friendly than Keychain despite its simpler interface. Email monitoring is a useful additional feature. Give it your email and it will be checked against all known data breaches and monitored for any breaches in the future as well.

This gives full access to iOS apps as well as the Mac ones, and of course Android and Windows ones as well if required, and the cross-device configuration is managed through F-Secure web accounts.

Depending upon how many Macs, or other devices, need protecting, F-Secure Total can be quite expensive. Don’t forget though that F-Secure Safe is available, and cheaper, if you don’t want the VPN or ID Protection.

See alternatives in our roundup of the best antivirus software for Macs.

There are occasional odd notes across the three utilities that make up F-Secure Total that betray a somewhat Windows-centric heritage, such as preferences settings for ‘minimising to the tray’ and oddly sized popup menus. The features work as desired, but it could feel more consistently Mac-like.

It does a good job of protecting your devices and your data from harm, but the occasional off-pitch notes and the relatively high price mean it’s not the most compelling security product we’ve reviewed for Macs.