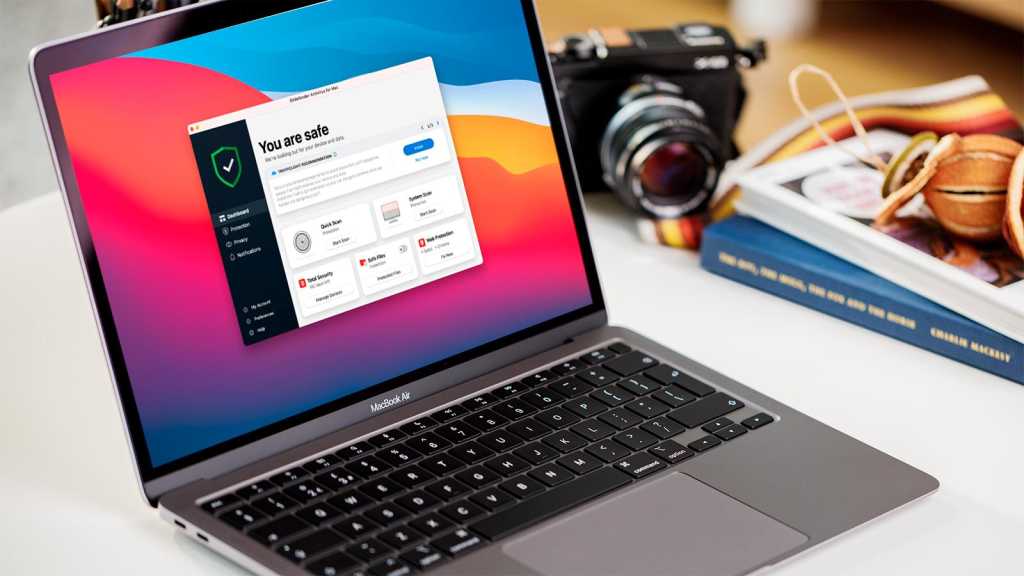 Bitdefender Total Security is a very effective tool for keeping your devices safe, whether you’re using a Mac, Windows PC, an iOS or an Android device. While the bundled VPN was very basic, the rest of the suite of tools is effective and easy to manage.

Bitdefender Total Security is a security software package that protects your Mac (and other devices) from a wide range of problems from browser hack attempts to more rare but worrying actual malware activity and also secures your online activities with a VPN.

This is a step up from the most basic Antivirus product, but sits below Premium Security. You can run Total Security on macOS, Windows, iOS and Android, and a standard subscription can be used on five devices at once (versus three with Antivirus and 10 with Premium).

However, whether ‘Total’ is an accurate description is becoming debatable these days, especially where privacy is concerned, as Bitdefender doesn’t offer as many features as rivals in 2021, and the feature set for macOS is considerably smaller than on Windows 10.

Once installed and the necessary permissions have been granted, Total Security will run its real-time protection in the background, watching your files for any unwanted behaviour.

While the macOS version, which we’re focusing on in this review, doesn’t have a scheduled scan option, its real-time protection makes this unnecessary as long as a full System Scan has been run initially to catch anything that may be already on the hard drive. 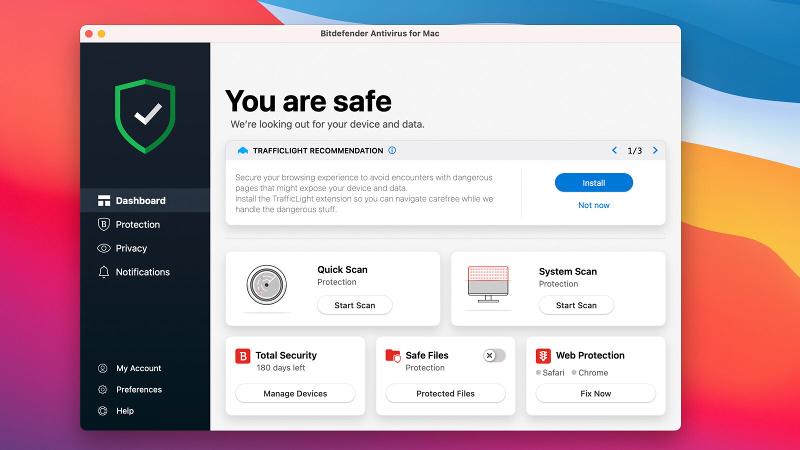 Quick Scan does the same but only in certain locations. You can also scan a specific file, folder or mounted volume on demand but there’s no button offered for this: you need to drop it into the main window for checking.

Bitdefender’s VPN service helps keep your online activity secure, but in Total Security, you only get limited use of it. Very limited, in fact.

Without purchasing Premium Security, or the additional Premium VPN option, VPN usage is capped at 200MB of traffic a day and you’re not allowed to select a specific virtual location. That’s chosen automatically.

This compares poorly with some competitors such as Avira Prime VPN’s unlimited traffic and so isn’t that attractive, but other browsing protections are more substantial.

For fuller VPN features, check out our round-up of the best VPNs for Mac.

The TrafficLight browser plugin, for example, blocks any sites known to be malicious (using a live database). There’s also an anti-tracker browser extension and an adware blocker wich safeguards the browser itself.

Total Security’s Autopilot feature provides recommendations based on your hardware and usage patterns. It’s not real AI of course; the things it suggested were along the lines of reminders to install the various extensions and browser plugins. However, it’s still a useful way to ensure things don’t get forgotten.

Other features include Safe Files which protects files in specific locations from modification by untrusted software, and it’s great to see Time Machine Protection which does the same with your Time Machine backups. 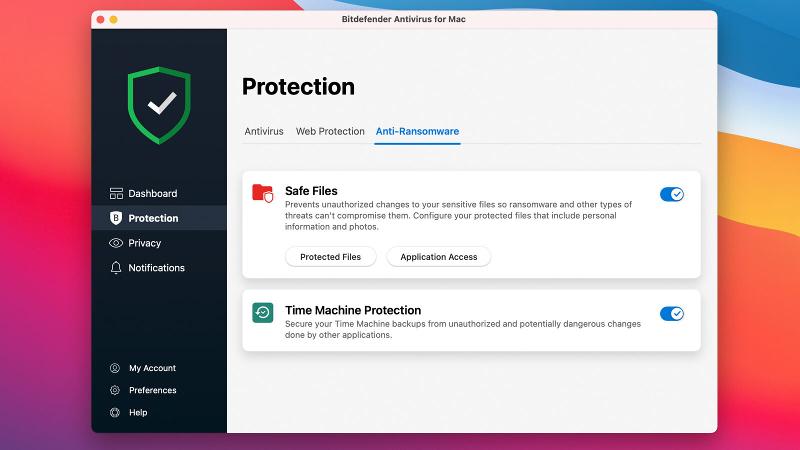 The real-time protection, called Bitdefender Shield in the preferences, proved to be effective and unobtrusive; we didn’t notice any particular impact on general performance while it was active.

Running a full System Scan in the background was similarly light on performance impacts, although it did use more CPU and GPU power. It also took a very long time – a shade over four hours in our system – so you probably wouldn’t run that frequently (but you also shouldn’t need to).

Quick Scan only checks for unwanted software in the most likely areas rather than every possible area, which means it runs more quickly than the full System Scan; under 15 minutes in our tests. 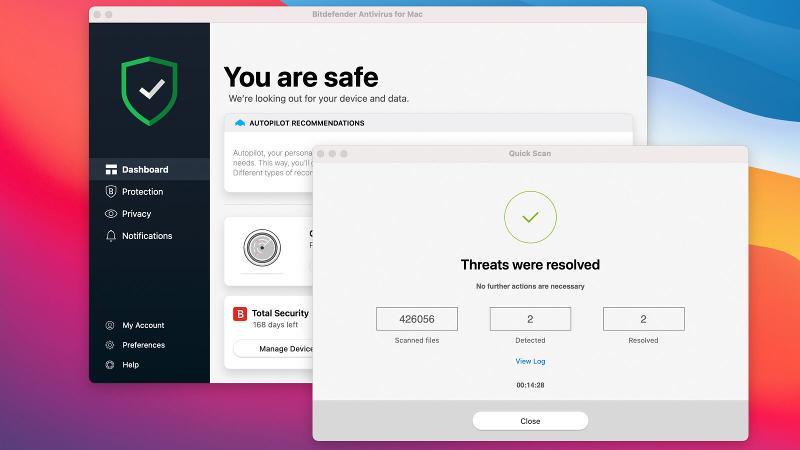 As part of our tests we trawled through some unsavoury sites to see how the TrafficLight browser plugin behaved. Sites listed in Bitdefender’s databases were identified both directly and in DuckDuckGo search results.

We saw a few undetected instances of issues such as ‘your Flash is out of date’ attempts to deliver dodgy installers (which the real-time protection caught when downloaded), but most sites were fielded appropriately. Our results mirror those from AV-Test.org which gave Bitdefender top marks for performance and usability and a high but not perfect score for protection.

The latter is a score that is generally in slight flux as new threats appear and records are updated, so we don’t regard that as significant – particularly as it achieved ‘Advanced+’ in tests run by AV-Comparatives. 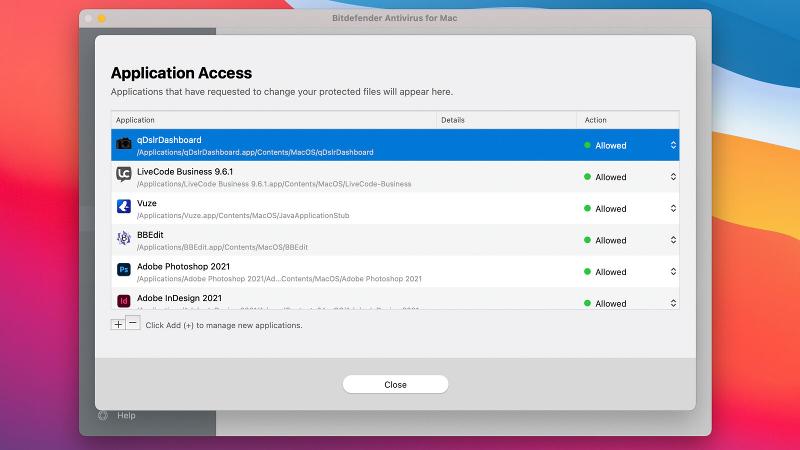 Like all paid-for security software Bitdefender Total Security is offered as a rolling subscription. The standard plan covers a total of five macOS, Windows, iOS and Android devices for a year. The first year is discounted, so remember to factor in subsequent year-by-year costs.

The cost is comparable with other packages, but because Total Security is relatively basic on the Mac it isn’t quite as good value as some of its rivals, including the already-mentioned Avira Prime.

You can see Prime and alterative choices in our roundup of the best antivirus for Mac.

If you have Windows and Android devices to protect, you might also like to read our sister site Tech Advisor’s review of Bitdefender Total Security.

If your goal is to keep your Mac protected from malware, then Bitdefender does a great job. But when you compare what the Mac version offers compared to the Windows version, you’ll feel quite hard done by. There’s no password manager, no social network protection, no webcam or microphone protection, no Wi-Fi security advisor and plenty of other features that Windows users get for the same price.

Bitdefender is also lagging behind its rivals with no identity protection, so you may well prefer to spend your money elsewhere.