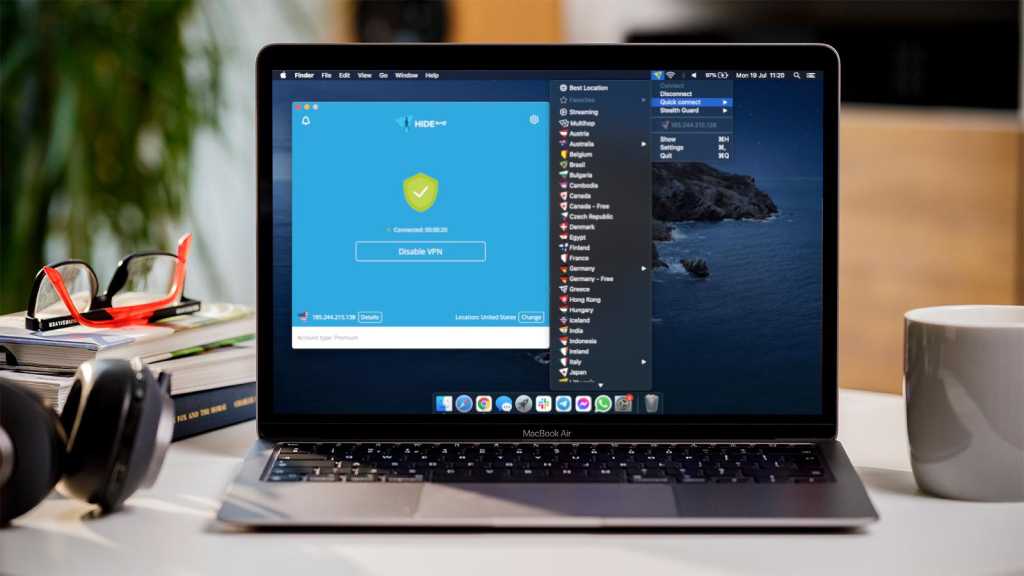 Hide.me is a solid VPN with a great free tier, but the UI isn’t particularly intuitive and premium plans are more expensive than many rivals.

From free (Premium subscription from $5.41 per month)

If you’re serious about your online privacy, an effective VPN is an indispensable tool. Despite the security measures put in place by many browsers and websites, there’s nothing stopping your internet service provider (ISP) or even the government from knowing what you’re up to. It also leaves you vulnerable to cybercriminals intent on stealing personally identifiable information (PII) such as addresses and bank details.

A VPN mitigates this threat by encrypting the connection between your device and a server on the internet. This gives you a new IP address, meaning it’s very difficult to trace your online activity back to you. However, it’s not a foolproof solution – signing in on sites such as Amazon and Google means you can still be tracked and monitored by those companies.

The other main reason to use a VPN is for unblocking geo-restricted content that’s not officially available where you’re physically located. You might want to accessing local versions of Netflix to see the latest movies or episodes not available in your country or so you can watch BBC iPlayer from outside the UK.

Hide.me VPN has been around for almost a decade and offers a compelling service for Mac users – on paper, at least. It has a respectable free tier for occasional use, but like many free VPNs you’re very limited in terms of which servers you can use. The focus of this review will therefore be on the premium subscription – how favourably does it compare to the best VPNs you can get for your Mac (and beyond)?

As of July 2021, Hide.me VPN has a total of more than 1900 servers across 75 locations. These are based within 47 countries around the world, including the UK, US and Australia. They’re also all physical – Hide.me doesn’t operate virtual servers. In some cases virtual servers can actually be beneficial as they can lead to faster connection speeds, so don’t dismiss other VPNs because of these.

Like most VPNs, Hide.me makes full use of the Menu bar at the top of the display in macOS. The icon appears there once you open the app, offering a quick and easy way to access your favourite servers without interrupting what you’re doing. 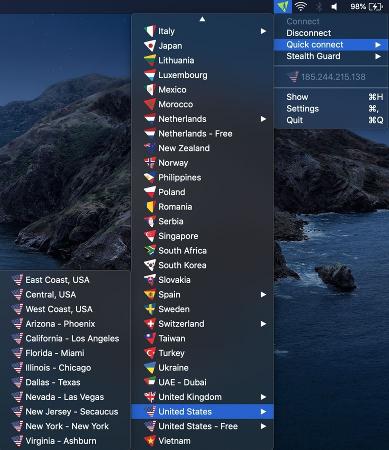 That was my go-to method while testing it, as the app itself is clunky by comparison. Clicking a small button of a small floating window that can’t be resized feels like a poor use of space. Once you get there, a long scrolling list doesn’t feel like the best way to present the information. A search bar does simplify things, though, and you can star ‘favorite’ servers for easy access. 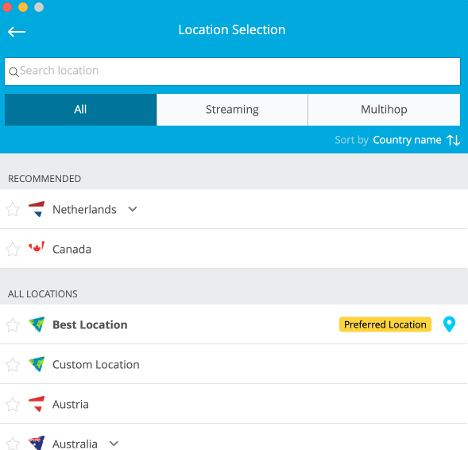 There’s also a separate streaming section here and it’s great to see dedicated servers for individual services, and there’s even a link to a Google Form if you want to request one that’s not listed. 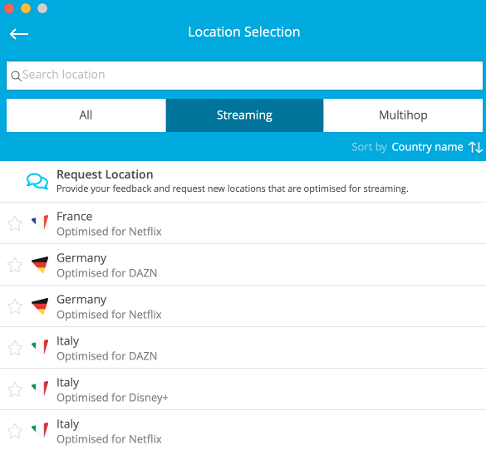 You’ll also find the MultiHop feature on this screen, which routes your traffic through two servers for extra protection. However, it’s still in beta at the time of writing, so don’t expect it to work flawlessly.

What’s great about it is that you’re not limited to the pre-set ‘hops’ – you can tap Add Multihop and pick the countries you want the hops to go via. 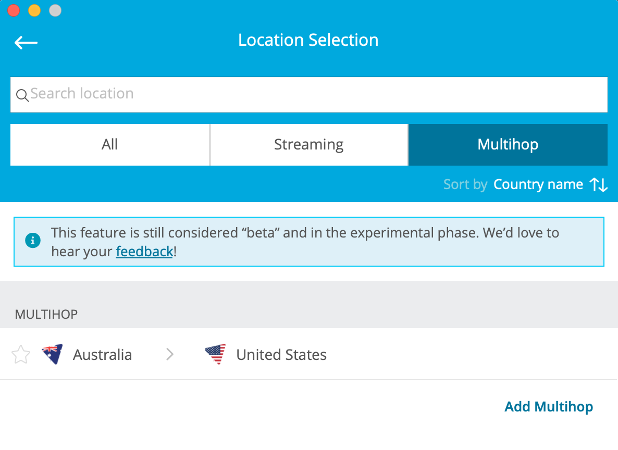 A quick look through the Hide.me Settings menu reveals many of its other key features. There’s a built-in kill switch, which automatically stops apps from sending data over your internet connection should the VPN tunnel ever collapse, a crucial feature for maintaining your privacy.

Split tunneling is here too, a feature you won’t find on many VPN services for the Mac. You can create a list of apps which use the VPN or a list of exceptions, meaning an active connection doesn’t have to apply to your whole device. 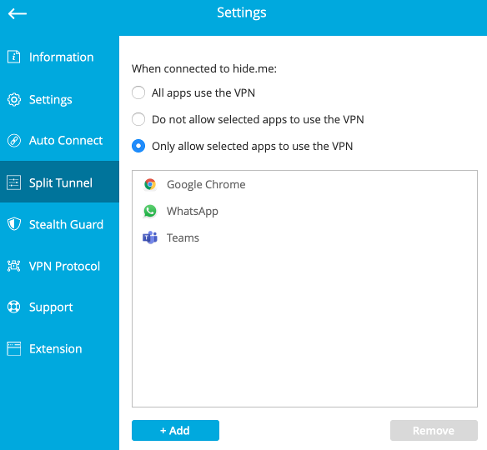 Hide.me also has what it calls a ‘Stealth Guard’, which can prevent certain apps from running at all without an active VPN connection. Like split tunneling, this can be set up to either prevent all connections from running without a VPN, or only the apps you choose. You might want to use this for any apps where you definitely wouldn’t want anyone to see your activity.

In keeping with many other premium VPNs, Hide.me benefits from a variety of ways to get support. This includes many how-to guides and FAQs, alongside email support tickets and direct access to the community forums. However, it’s headlined by 24/7 live chat. When I tried it out, I found the support team were polite and responsive, addressing my queries very promptly. 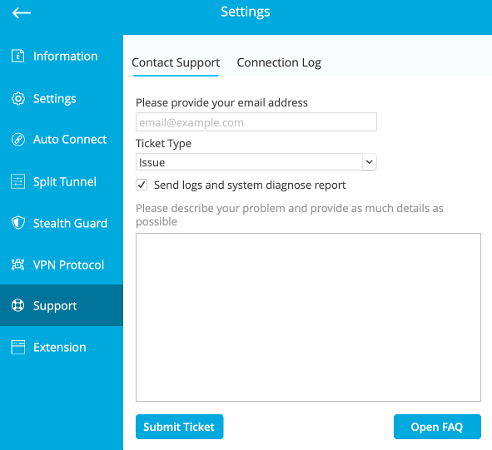 This is supplemented by free browser extensions for Chrome and Firefox, which provide access to servers in Canada, Germany, Netherlands and an ‘Automatic’ server subscription-free. However, while it will still hide your IP address, the connection is not encrypted – Hide-me doesn’t recommend using this instead of the full VPN.

The paid version doesn’t limit the number of devices its app can be installed on, but you are capped at five active connections at any one time.

Hide.me is one of a growing number of VPNs that supports the WireGuard protocol. This first launched in 2020 and is a fast, lightweight alternative to existing protocols. It’s offered in addition to OpenVPN and IKEv2 in the Hide.me app, although the latter is oddly still marked as the company’s recommendation and that it’s the fastest protocol available. Looks like someone forgot to update the descriptions when WireGuard was added. 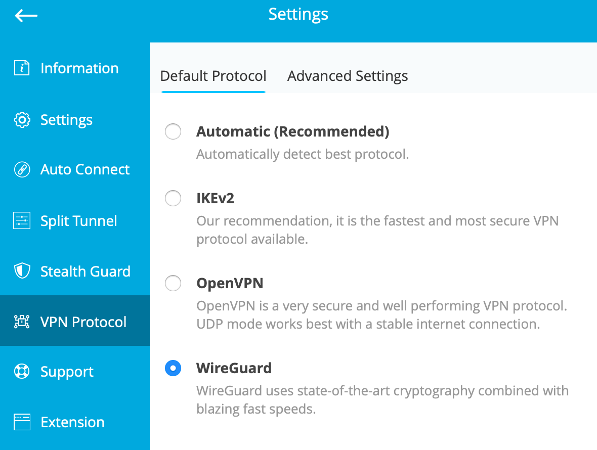 VPN Pro’s comparative analysis could help explain why it’s the recommended choice, even if the site acknowledges that results can be deceptive. The top five positions are all filled by WireGuard-based services, yet Hide.me’s own version languishes in 13th place. However, the 16.06Mbps max speed quoted is clearly inaccurate.

How do I know? Despite being limited by my home Wi-Fi connection (around 32Mbps), I recorded higher figures than VPN Pro quotes in every speed test I carried out using the WireGuard option.

The ‘Best location’ preset defaulted to a location near me in the UK. It dropped speeds only slightly to 31Mbps, but I didn’t notice any effect on my browsing experience.

Hide.me has dedicated streaming servers, perfect if you’re looking to unblock a specific service. The app doesn’t mention where the Netflix and Disney+ US servers are based, but they work as advertised while maintaining download speeds around 30Mbps. 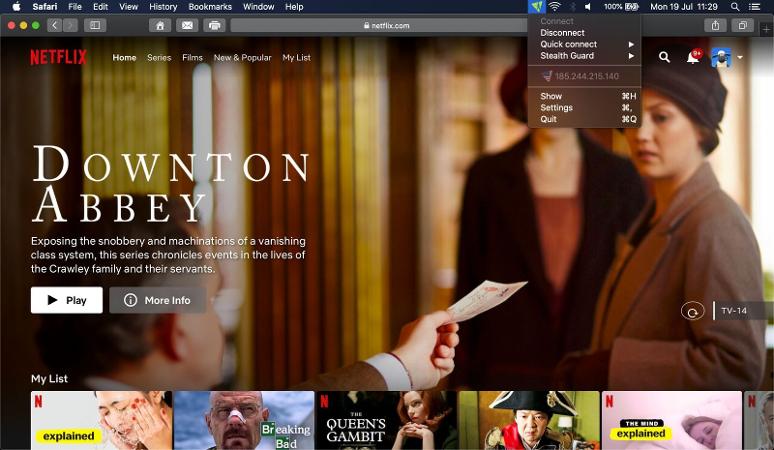 There’s also a UK server optimised for BBC iPlayer, and I confirmed with a colleague based in France that this unblocks the service. Unfortunately, none of the UK servers could provide access to the ITV Hub from abroad, but this is a common sticking point among VPNs at the moment, it seems.

Connecting to a server as far away as Sydney (12-1am local time) can cause big speed drop-offs, but that wasn’t the case here. Downloads stayed steady at around 26Mbps, while a server in Taiwan (10-11pm local time) fared slightly better at 27Mbps. The latter is the closest you’ll be able to get to a server in China.

Throughout all these tests, upload speeds remained stable at 6Mbps (limited by my broadband connection). One thing you will notice with increased distance from your physical location is higher ping, but this primarily affects online gaming.

Hide.me is based in Malaysia. That might seem like an unusual choice of location, but it satisfies one of the key criteria for a modern VPN service – being outside the 14-eyes. This is an agreement between of 14 countries around the world (including the UK, US and Australia) to freely share security information with each other.

A VPN prides itself on protecting user privacy, so being based in one of these countries would be a concern. However, from Malaysia there are no such issues – it’s highly unlikely Hide.me would ever to be forced to hand over user data.

Even if it was, the company operates a strict no-logs policy, meaning your online activity and payment details are never stored. This has been certified via an independent audit from Defence Code Ltd. The last record of this is from May 2015, but Hide.me’s has confirmed that an update is in the works for later in 2021.

Nonetheless, the VPN’s Privacy Policy makes for encouraging reading. As well as reiterating the no-logs policy, it also says the company doesn’t request or store the ‘name, IP address or physical addresses or any other personal information’ on any of its users. Any personal data entered online is apparently protected using encryption. The Privacy Policy was published in July 2019, so it’s easier to trust its validity.

If you’re looking for more recent evidence of Hide.me’s privacy credentials, the service was added to the VPN Trust Initiative (VTI) in February 2020. It joins 13 other services in ‘promoting privacy and security through VPNs’, and the VTI maintains strict eligibility requirements.

Hide.me is one of the few paid-for VPN services with a genuine free tier. It limits you to just five servers and you miss out on most of the features above, but it’s a great option for occasional use. You only need an email address to sign up, and it works within the same app as the premium plans. The extension for Chrome and Firefox is of course free for everyone, but remember it’s only a proxy, not a VPN – that means your connection isn’t encrypted.

Most people will want a lot more than Hide.me’s free tier offers, though. Unfortunately, premium plans are significantly more expensive than most rivals.

Hide.me is a solid VPN for the Mac, offering everything most people are looking for. It’s headlined by fast WireGuard speeds, with almost no slowdown in connection speeds. There are thousands of servers available, including those which unblock US Netflix or BBC iPlayer from outside the UK.

Elsewhere, Hide.me has a great range of features – a kill switch, split tunneling and Stealth Guard (which can stop apps from working unless they’re connected to the VPN) – are all here. There’s also an extensive range of customer support and great device compatibility, especially with the option for up to 10 simultaneous connections.

However, it’s far from perfect. The user interface on Mac is a bit clunky and the last independent audit was in 2015, although an update to the latter is planned.

Premium plans are also relatively expensive, and Hide.me doesn’t do quite enough to justify the extra expenditure. It’s a good service, but rivals offer better value for money.

Anyron’s main focus is PCs and laptops. Much of the rest of his time is split between smartphones, tablets and audio, with a particular focus on Android devices.