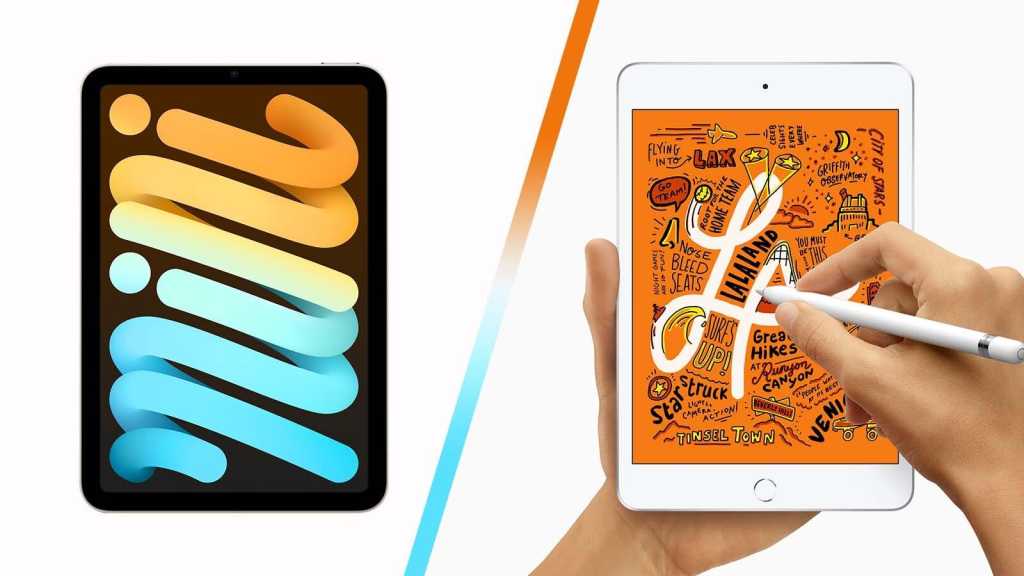 The iPad Mini (2021) is a complete rethinking of the tired format offered by the iPad Mini (2019). A faster processor, bigger screen, better cameras, upgraded connectivity and a lovely design make it the one you should be spending your money on if you want a companion device for a good few years to come.

Apple has released a new version of its smallest tablet in the form of the iPad mini 6. We take a look at how this redesigned model compares to the iPad mini 5 that it replaces.

The new iPad mini (2021) marks the first time since the introduction of the line that Apple has treated its tiny tablet to a full redesign. Sitting the two devices side by side now makes it easy to differentiate between them.

On the older model you’ll see the familiar 203.2mm x 134.8mm x 6.1mm chassis with its Touch ID loaded Home button at the bottom and single FaceTime camera at the top. Surrounding these are the large bezels that frame the 7.9in display. Flipping it over reveals gently curved edges, the Apple logo at the centre and a single camera lens in the upper left corner. If you’ve ever seen an iPad mini in the past, then it will have looked exactly like this. 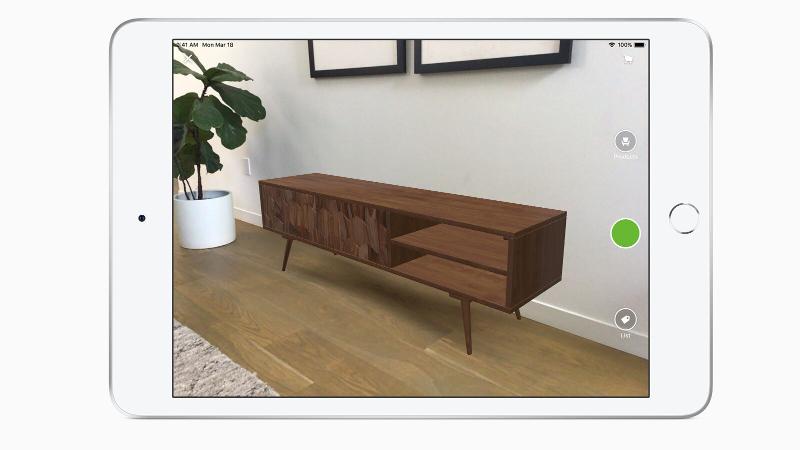 For 2021, Apple has given the device a significant face-lift. Gone is the Home button from the front panel, Touch ID has moved instead to the power button on the top edge. This is joined by the volume controls, all to make room for the magnetic charging area on the right flank that can house the Apple Pencil (2nd Gen). This is a step up from the 1st Gen Apple Pencil support offered by the iPad mini (2019).

Gentle curves on the chassis have given way to the squarer edges that are also employed on the iPhone 13, iPad Pro and iPad Air devices. It’s all reminiscent of the iPhone 4/5 era, while still managing to look thoroughly modern.

The bezels on the new model have also been slimmed, while still retaining enough space to allow you to actually hold the device without triggering commands on the display. With the Home button gone, the interface is now gesture based, as on the iPad Pro and iPad Air (2020) models. 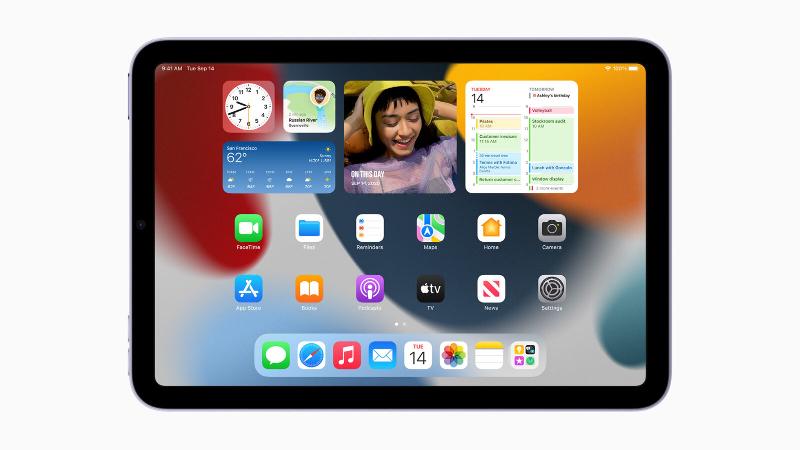 More features that are absent from the iPad mini (2021) include the headphone jack and a lightning port. The former follows Apple’s obsession with killing off wired headphones, while the latter is to make room for a USB-C charging port that brings it into line once more with the iPad Pro and iPad Air.

Twin speakers adorn both models, but the newer iteration has something Apple calls Landscape mode, which is supposed to equate to a kind of stereo effect.

At the centre of the new iPad mini is the larger 8.3in display, marking an increase in size from the 7.9in screen that’s come with all mini devices since the first one appeared back in 2012. Thanks to getting rid of the Home button, Apple has managed to fit this larger panel into a smaller device, with the iPad mini (2021) measuring 195.4mm x 134.8mm x 6.3mm, making it shorter but very marginally thicker than its predecessor. Weight has also been addressed, with the old 300.5g being lessened to 293g (on the Wi-Fi only models).

It’s not just the casing that received an overhaul, as Apple has paid close attention to how the new mini works too. Here’s the main features that you should be looking at.

While both devices feature fully laminated IPS panels that offer 326ppi, True Tone, P3 Wide colour display, 500 nits maximum brightness, and an anti-reflective coating, the obvious difference is that the screen on the new mini is larger.

The 8.3in panel is enough of a step up from the 7.9in version to feel more spacious, without losing any of the practicality and pocketability for which the mini is renowned. Otherwise, there’s not too much to set them apart. Refresh rates remain at 60Hz for both devices, while the larger panel in the new mini gives it a resolution of 2266 x 1488 instead of the 2048 x 1536 found on the old mini. Oh yes, and the iPad mini (2021) has a Liquid Retina display rather than the simply Retina one found on the iPad mini (2019), so…there’s that. Unfortunately the name ‘Liquid’ doesn’t actually signify a difference in terms of screen quality.

One area where the new mini marches ahead is in terms of its processing power. The 2019 iPad mini was already a punchy device thanks to the A12 Bionic chip Apple bestowed upon it, but this is knocked into the proverbial cocked hat by the A15 Bionic that’s installed in the 2021 model. This is the same processor you’ll find in the iPhone 13 range, including the iPhone 13 Pro and Pro Max, and is the first time this new chip appears in an iPad.

We expect the next iPad Air to also get the A15 Bionic eventually, but at the time of writing the smallest iPad in Apple’s range now comes with its most powerful A-series processor. Obviously, the latest iPad Pro 11in and iPad Pro 12.9in have the M1 processor as seen in the 2020 Macs, and it’s expected that the next versions will come with an M1X, M2 or M2X processor, but those really are a different class of device now compared to the consumer-level iPads.

You won’t find any multi-camera arrays on the minis, as those are still reserved for the iPad Pro range, but the new mini does have some upgraded optics. The iPad mini (2019) has an f/2.4 8MP Wide camera with Auto HDR for photos, whereas the iPad mini (2021) benefits from a faster f/1.8 12MP Wide camera with Smart HDR 3. This means you should get better shots on the newer version with brighter and more detailed colours. 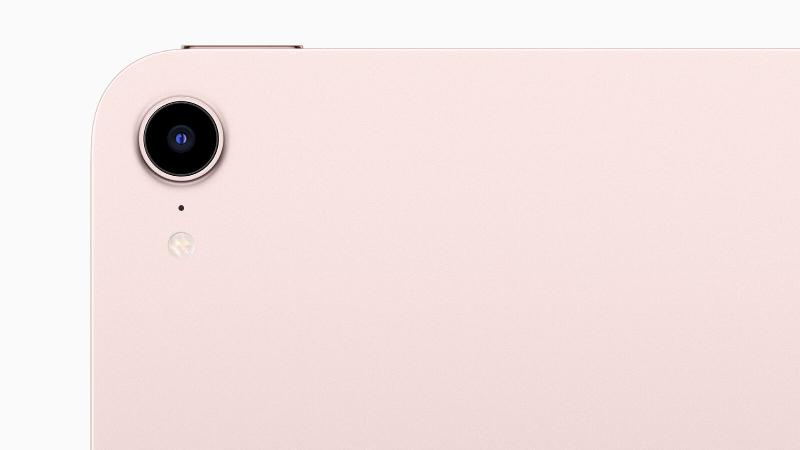 The iPad mini (2019) is fine as a basic camera, but if you want more refined results, especially in video, then the iPad mini (2021) is the easy winner.

Front cameras have also seen some attention, with the FaceTime unit on the 2019 mini replaced by an f/2.4 Ultra Wide 12MP module in the mini 2021 that has a 2x zoom out feature that means it can offer Apple’s new Centre Stage technology that keeps you in the middle of the screen even when you move around on video calls. It’s a subtle but worthy addition, especially in these days of constant video conferencing.

A couple of things worth noting about the iPad mini (2021) is that it boasts not only the latest Wi-Fi 6 speeds, but if you opt for the LTE version then you’ll also be able to use 5G networks, neither of which are available on the iPad mini (2019).

For a full breakdown of the technical specs for both devices, here’s our quick guide:

Both devices run iPadOS 15, with the older device still able to use most of the features on offer, with Centre Stage being a hardware-restricted omission. Apple has proven reliable in the past at keeping its devices updated, so we think it’s safe that the iPad mini (2019) should still get a few more updates.

Of course, if you want the most future-proof product, as well as one that’s optimised for the newer software, then the iPad mini (2021) is the one you should choose. To see what both can do, take a look at our guide to iPadOS 15.

The iPad mini (2021) was released on 24 September 2021, whereas the iPad mini (2019) was discontinued around the same time, so you’ll only be able to pick up the latter from third party retailers or maybe in the Apple Refurbished Store.

Of course, you should also read our where to buy the iPad mini 6 guide to see if you can snap up a great deal.

You may be able to find a great deal on an iPad mini 5 from 2019 – just remember that it’s value will have decreased since the new model’s introduction. Check out the latest deals below:

We always liked the iPad mini (2019) as it offered excellent performance and value for money if you wanted a smaller iPad. It’s still a great product, but the new design and upgraded capabilities of the iPad mini (2021) do signal a step forward for the format. The A15 Bionic is a much faster processor, the improved cameras offer more flexibility and quality, plus the larger screen and lack of Home button just make it a more modern device.

The iPad mini (2019) would still be a bargain if you can get one at a discount, but iPad mini (2021) is the future and we have to say, it looks pretty bright.