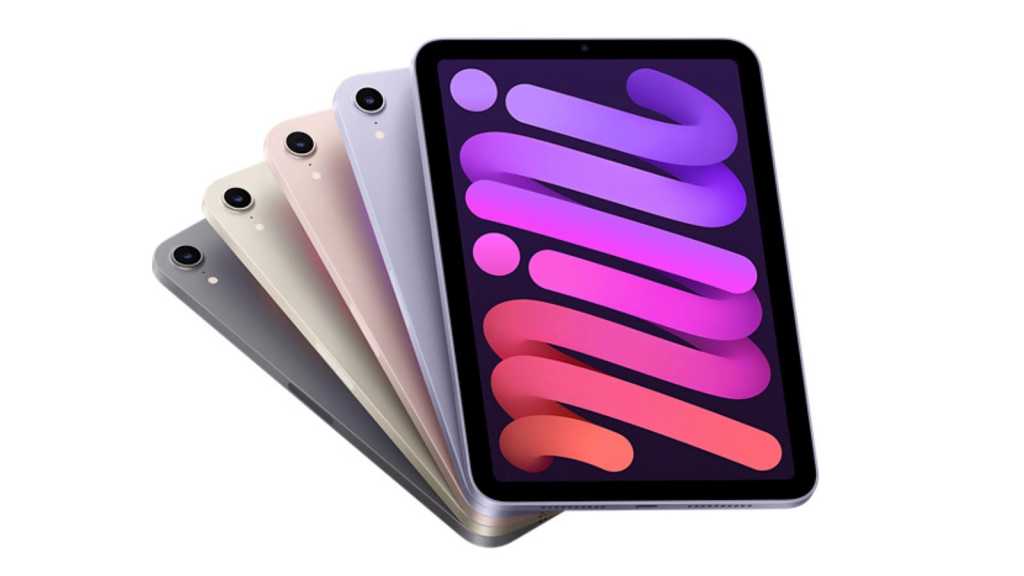 The new iPad mini goes a step further in almost every discipline and it looks fit for the future thanks to its modernized design. Fans of the mini format should definitely adopt this generational change despite the higher prices. It’s worth it!

According to Apple the 2021 iPad mini is the biggest update since the mini format arrived in 2012 and that isn’t even an exaggeration, because even at first glance it is clear. Everything has changed except for the size.

This is evident even from its appearance: The display now fills almost the entire front and the design follows the trend set by the iPad Pro models and adopted by the 2020 iPad Air: the edges no longer curve gently instead it has a trendy angular design like the iPhones.

Despite the fractionally more compact dimensions, the screen size has grown from 7.9in to 8.3in (measured diagonally), partly due to reduced bezels. As a result the total number of pixels increases: now 2,266 x 1,488 up from 2,048 x 1,536. This isn’t all good news though: while there are more pixels overall the short display side actually has fewer pixels (1,488 instead of 1,536). This has an unexpected consequences in some apps: TikTok, for example, no longer rotates its screen into landscape format as it does on the iPad mini 5.

The long side gets significantly more pixels: 2,266 instead of 2,048. In total, the iPad mini 6 has about 226,000 pixels more than its predecessor did. The wider landscape format should bring advantages especially when watching movies, because the black bars at the top and bottom will be narrower. the larger screen size should also provide more space for icons and other elements on the screen. 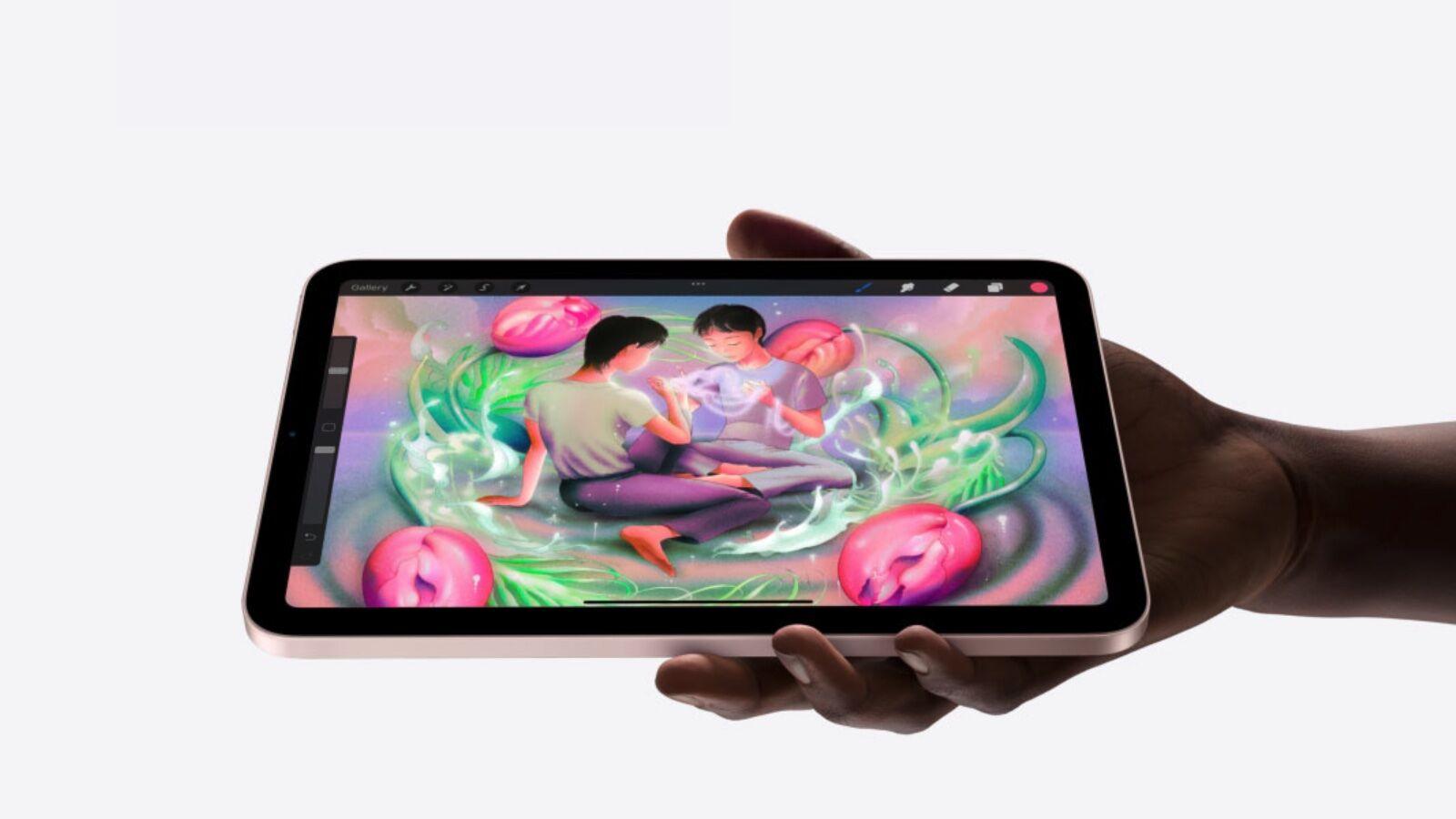 Interestingly the new dimensions of the screen mean that Apple has changed the aspect ratio: for the first time in the history of the iPad mini, the panel gets an aspect ratio of approximately 3:2. All previous models came in the traditional format of 4:3.

The screen itself has changed slightly: This time round we get a Liquid Retina Display, rather than just a Retina display. This is basically marketing speak for a technology introduced with the iPhone XR though, it’s not really any better than Retina and it is not OLED, or even mini LED. The iPad mini still offers True Tone (introduced on the last generation) to adjust colour according to the ambient light and the same anti-reflective coating that should ensure less reflections on the surface.

Brightness and colour space also remain unchanged compared to the previous model (500 cd/sqm and P3 colour space). Our measurements confirm that there is no change to the colour space. Our brightness measurement shows just under 400 cd/sqm so we wonder if the maximum brightness cannot be achieved by manual adjustment, but only via the brightness sensor. The black value is slightly better and the contrast ratio rises to above 1,200:1. Although these are not as good as the values you could expect from OLED displays, the image looks a little crisper and more natural than it did on the iPad mini 5. 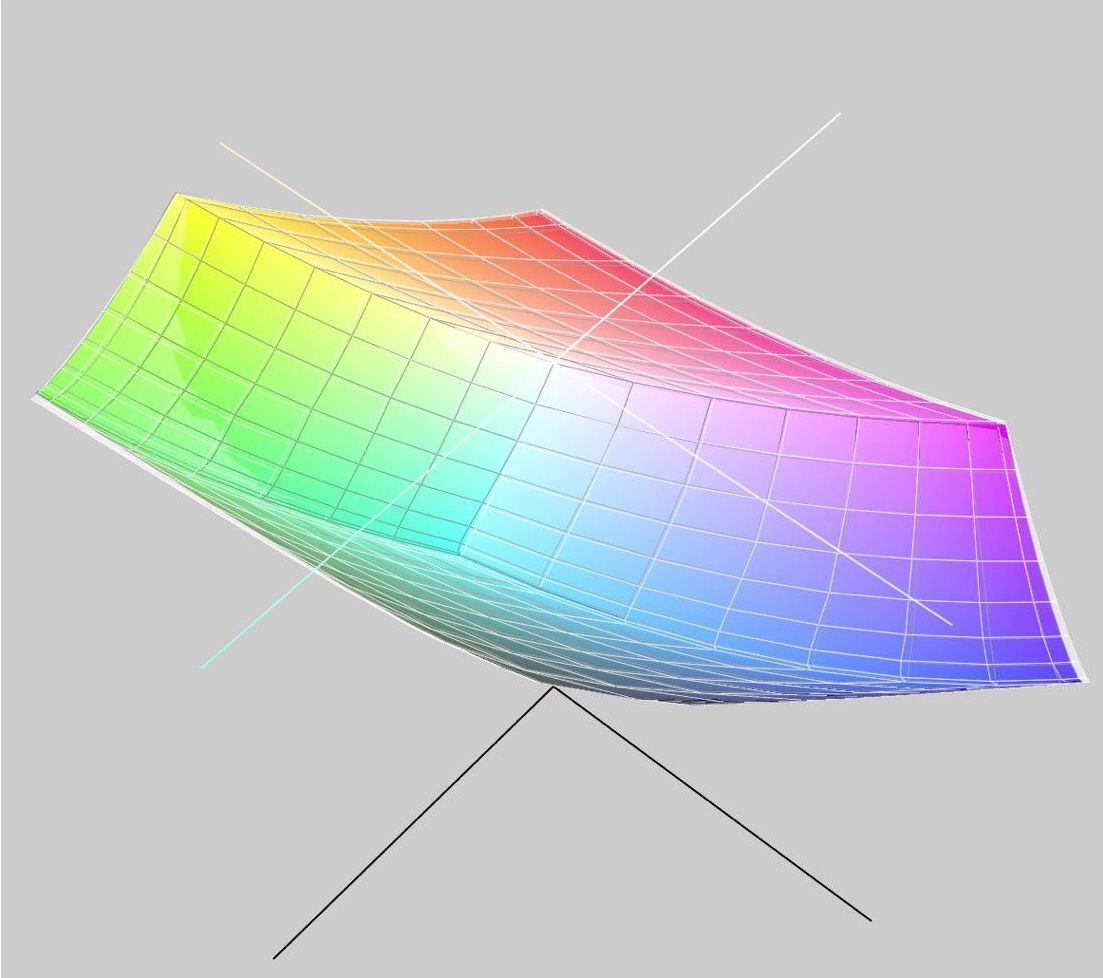 In our tests the colour space of the iPad mini 6 should reach the P3 standard, just like its predecessor. In the test, the differences to iPad mini 5 were marginal.

The larger screen is made possible because the home button has disappeared. The fingerprint scanner has been relocated to the on/off switch at the top edge of the housing, as it was with the iPad Air in 2020. The fingerprint sensor worked just as reliably as it did on the old iPad mini – the sensor size obviously has no significant influence on the detection rate. iPad mini fans will have continue to wait for Face ID to be introduced here. 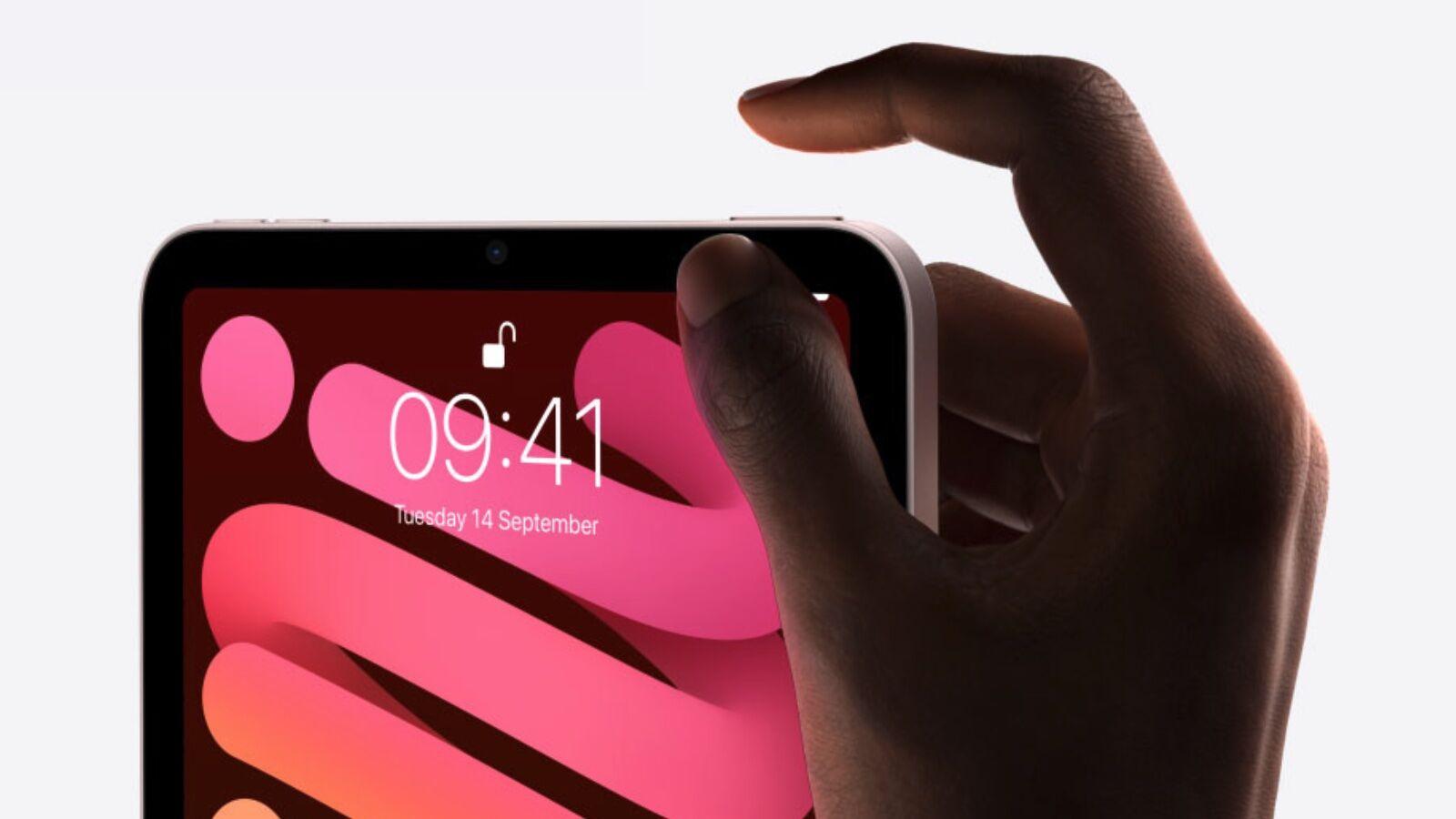 That’s not the only change to the physical buttons. The volume buttons have now moved to the top of the iPad mini – this is probably as a result of the iPad mini’s compatibility with the 2nd generation Apple Pencil that can magnetically adhere to the right side.

There is a consequence to the relocation of the volume button, but Apple has addressed it: The volume button assignment changes depending on how you hold the iPad. In portrait mode (upright), the right button always makes the sound louder, even if you hold the iPad upside down. In landscape mode, it is always the top button that sets the sound up. A nice detail that you intuitively understand immediately.

According to Apple, the housing is made of 100 percent recycled aluminium. You can choose between four case colours: Space Grey, pink, purple and Starlight. For all colours the screen border on the front is now black. There is no longer a variant with a white border. (We think this is a good move: the black boarder is much better for watching movies and other video content – we’ve been staying this for years).

The cameras have also been revised. Where previously there was an 8MP camera on the back, now there is a 12MP camera, which is supported by a true-tone Quad-LED flash. This is the first time the iPad mini has had a flash. Our tests showed that the flash ensures significantly better photos in low-light situations. 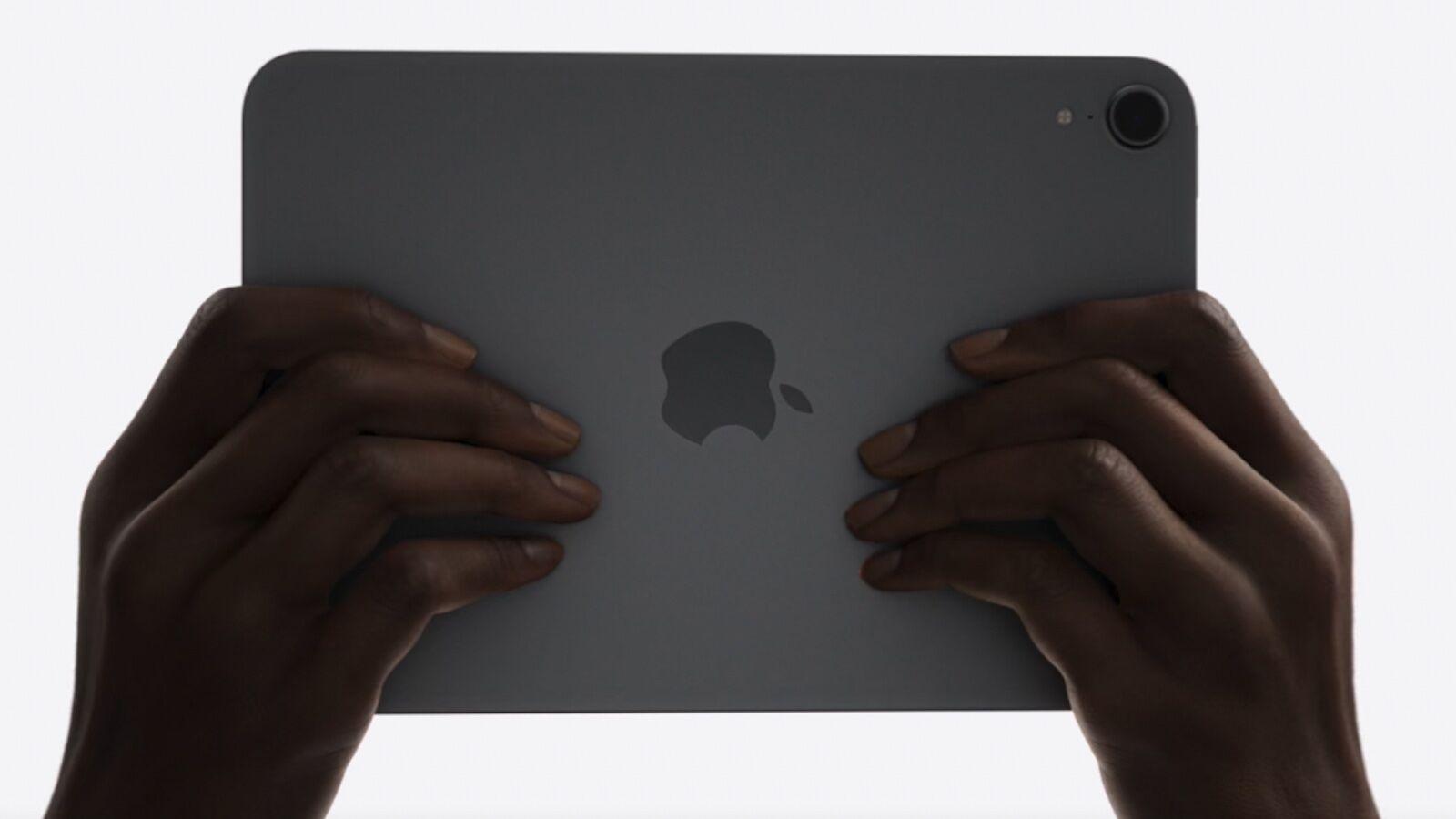 The front camera also sees a huge update moving from 7MP to 12MP and gaining an Ultra Wide lens. This is a real leap forward that also makes Apple’s Center Stage technology, introduced with the iPad Pro, possible. During video conferences the camera appears to automatically follow the faces of the participants and, if necessary, changes the zoom factor to fit in several people if they enter the camera area. This is an enormous advantage for video conferences.

This ultra-wide angle isn’t just limited to FaceTime though: it can also be used when photographing or taking selfies.

The iPad mini now supports the second-generation Apple Pencil (£119/$119), which offers more possibilities than the Apple Pencil 1 that was previously supported (and is still the only option for the standard iPad). https://www.apple.com/uk/shop/product/MU8F2ZM/A/apple-pencil-2nd-generation. There is also a new Smart Folio available in five different colours.

The CPU/GPU is important, even though the previous iPad mini never really appeared slow in practice. Surprisingly, Apple has given the iPad mini its latest and fastest mobile processor: the A15 Bionic. This is the chip that is also used in the iPhone 13 series and it is supposed to bring 80 percent faster graphics performance and 40 percent faster CPU performance. A 16-core neural engine and new ML accelerators in the CPU take care of machine learning, which should be twice as fast as the previous model. Apple isn’t only using its best current A15 CPU – it has selected the version with 5 (instead of 4) graphics cores. Thanks to slightly better heat dissipation, the iPad mini could actually show better CPU/GPU performance than the iPhone 13 Pro.

Our measurements certify that the iPad mini 6 sees a CPU performance increase of between 20 and 64 percent and an improvement in graphics performance of up to 72 percent compared to the previous model. 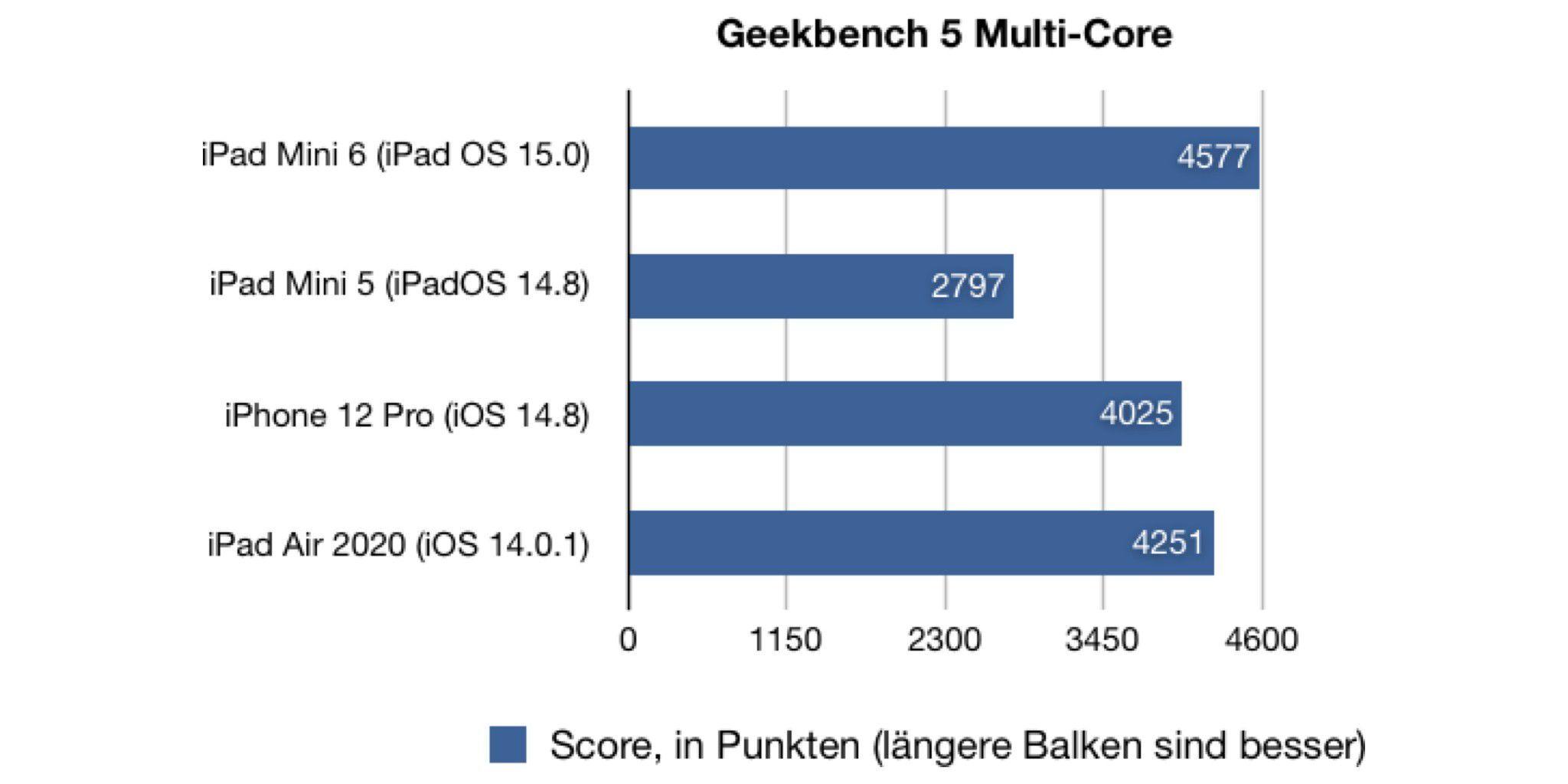 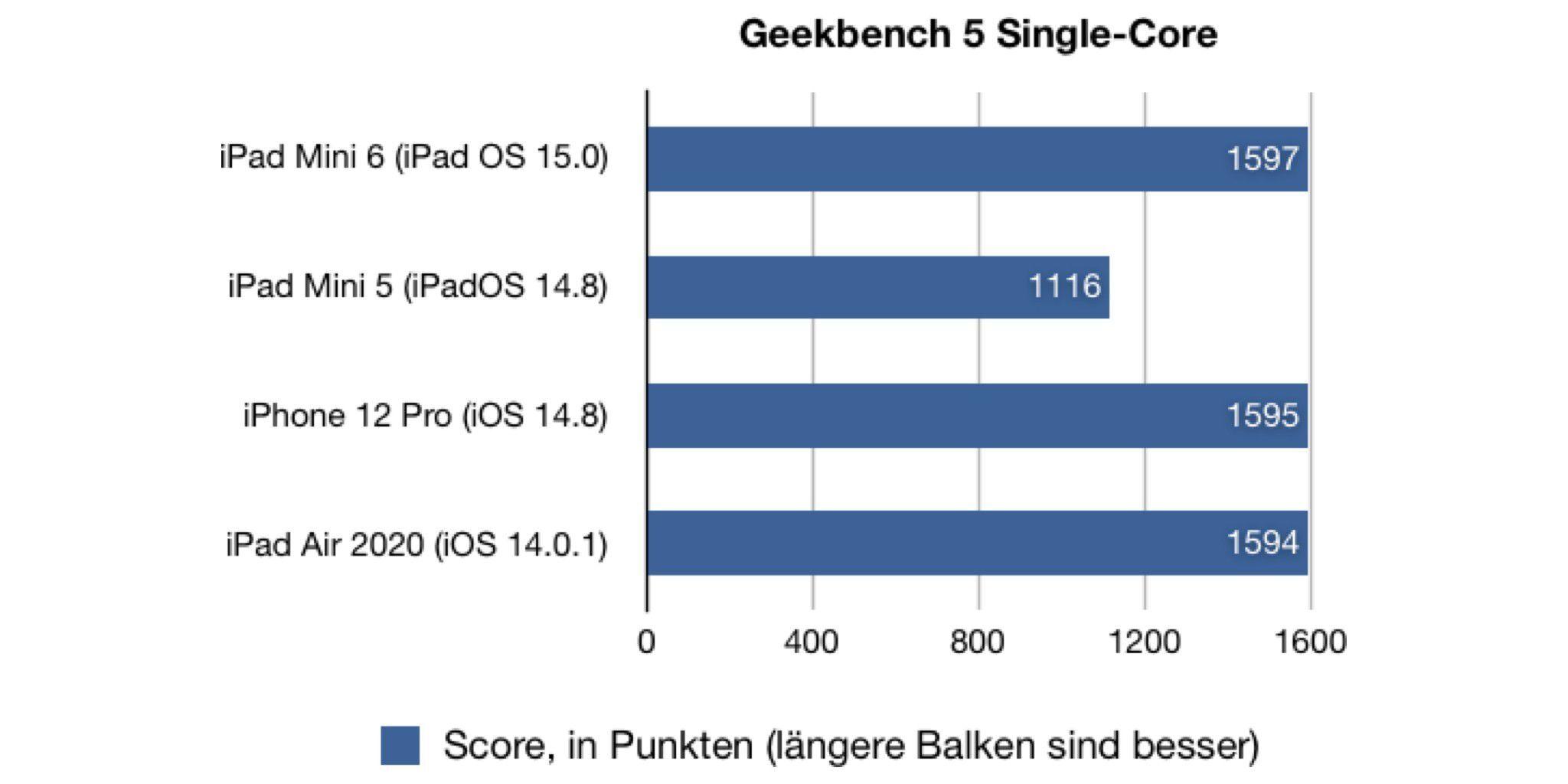 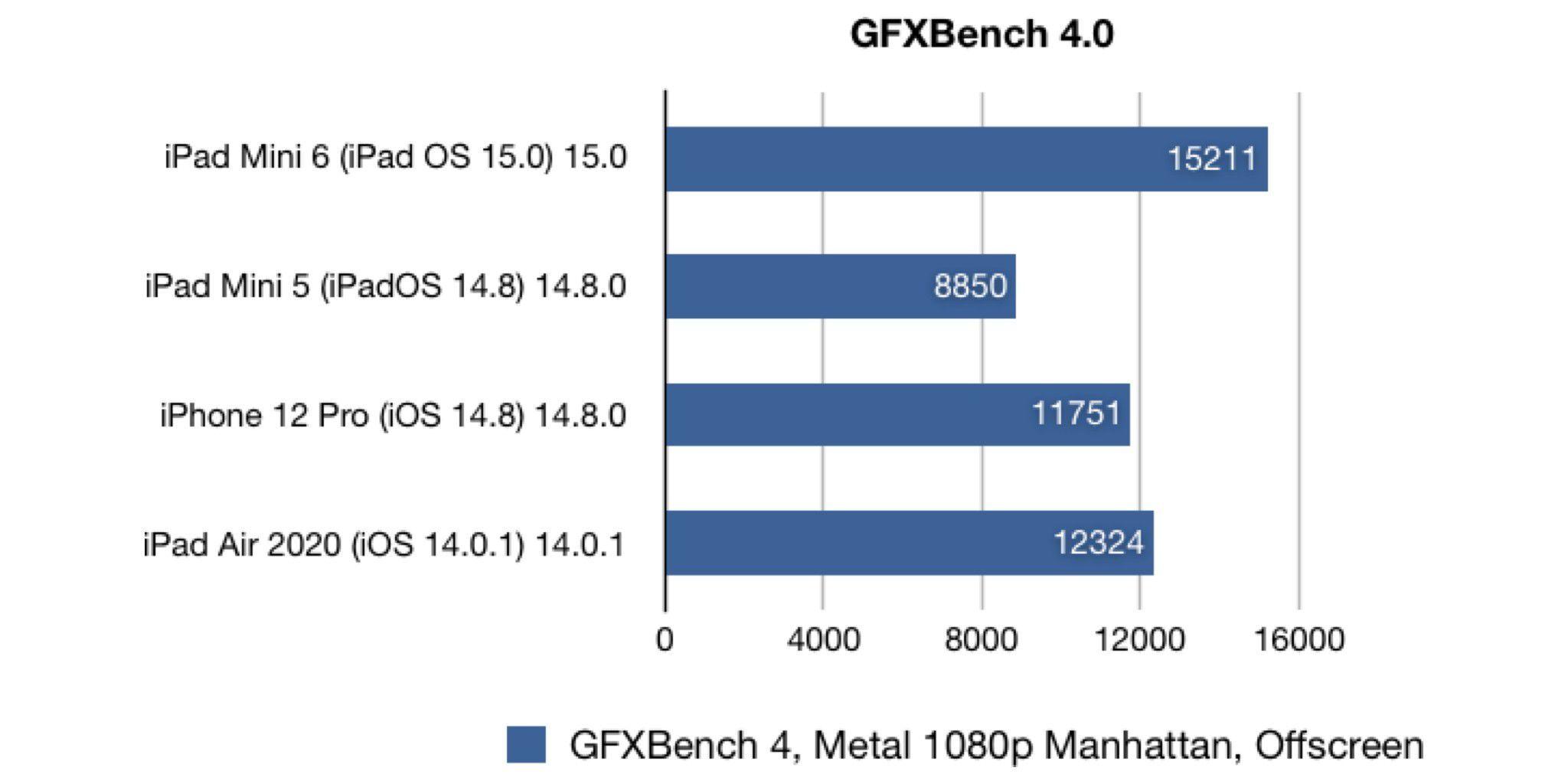 Fast 5G mobile technology also arrives on the 2021 iPad mini – of course, you will only be able to take advantage of that with the more expensive cellular models. Note that the 5G capabilities of the iPad mini don’t match those of the iPad Pro. The so-called millimeter wave frequency band (mmWave: over 24 GHz) is not supported on the iPad mini. In the UK and Europe this is purely academic though because 5G is limited to the frequency bands of less than 6GHz.

The WiFi variants (without 5G) also get more speed thanks to a WLAN chip with WiFi 6 technology.

Just as with the iPad Pro models a USB-C port has now replaced Lightning on the iPad mini. Sure many will lament the absence of Lightning and the need to buy new adapters, but there are many advantages to USB-C, including the fact that the transfer speed of USB C is significantly higher (up to 5Gbps), the cables much cheaper, and the connection options much more flexible. External monitors (up to 4k resolution), cameras, USB sticks, and network components can now be plugged in to the iPad mini. A USB-C charger offering 20 watts of power is included. 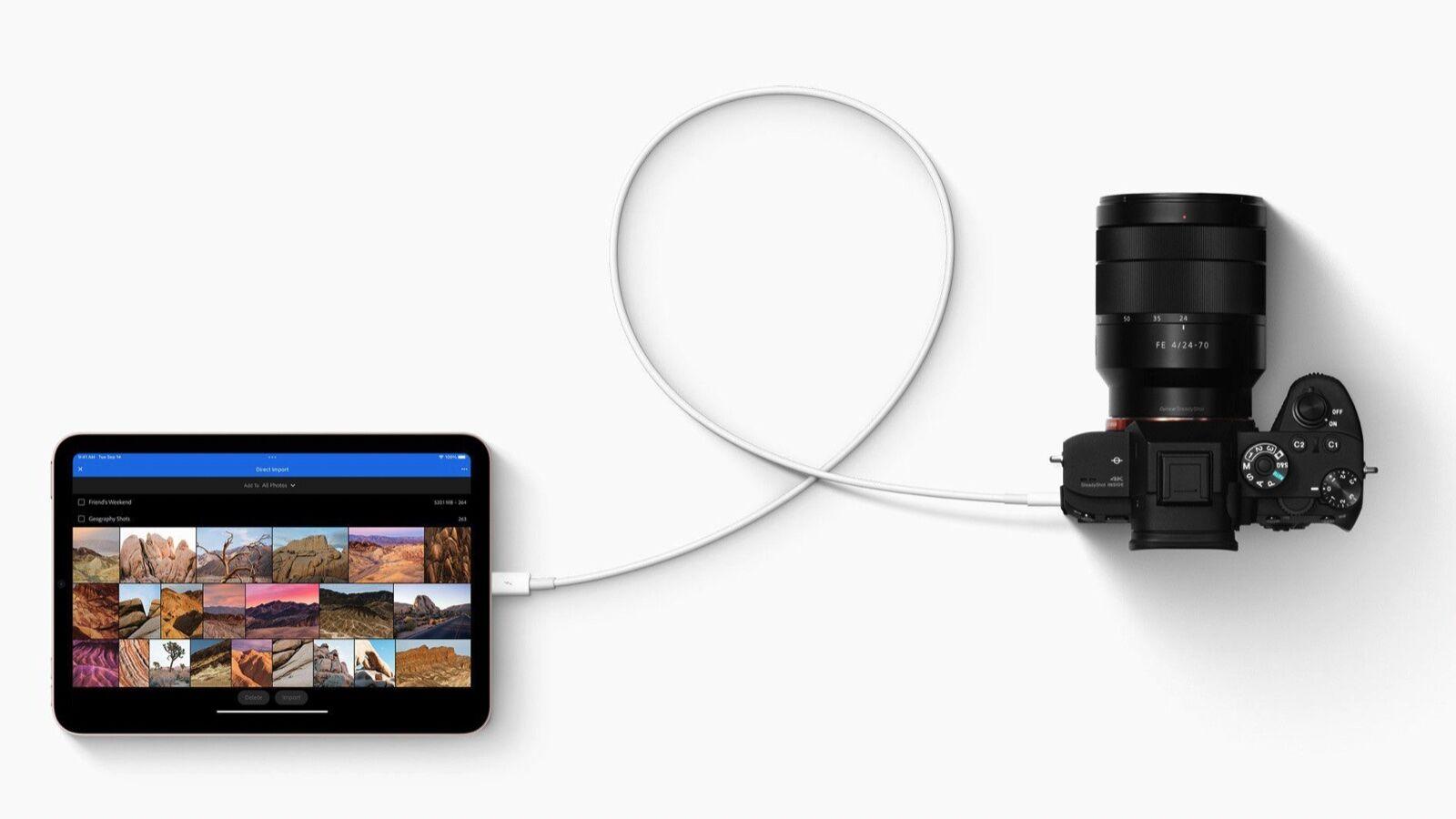 To demonstrate how much faster transmission speeds are with USB-C compared to Lightning we transferred 32GB of video from a USB 3.0 stick. It took about five minutes to import all 125 videos. This is impressive, because on the iPad mini 5 the process took about five times as long!

USB-C also enables a lot of external accessories that would not be so easy with Lightning. We successfully tested a USB-C docking station that provided Gigabit Ethernet, other USB ports (Type A) and an HDMI output. Even this worked perfectly right away and we were able to transfer the image displayed on an iPad mini to a connected 24in monitor. Great!

An external USB D/A converter from Helm also worked perfectly. This allows you to enjoy lossless and hi-res audio files from Apple Music in full quality, for example. This means that Apple can dispense with the 3.5 mm headphone output! Which of course means that without an additional USB adapter, you can no longer operate wired headphones.

Our main disappointment is that in terms of SSD storage you only have the choice between 64GB and 256GB (£140/$150 surcharge). Apple could easily have made 128GB the basic model as it has with the iPhone 13 generation.

Apple has also improved the audio capabilities by installing two speakers in the iPad mini. These are intended to produce a real stereo sound image in landscape format. These integrated stereo speakers are a clear step forward. Finally, the sound no longer comes from just one side, which is a pleasure especially when playing games and watching videos. However, the sound quality itself has not improved significantly. There is still a lack of substance in the lower frequency range (bass). Nevertheless, stereo is an enormous step forward.

Apple claims that battery life is unchanged at ten hours despite the larger display and improved CPU performance. We measured battery life using our usual tests and found that in our worst-case scenario (playing videos with full brightness) the iPad mini 6 ran out of juice after six and a half hours. This is still a good value and about 40 minutes longer than the iPad mini 5.

Our web surfing test retrieves various websites from the internet via WLAN with the brightness set to 50 percent. Here we managed 9:47 hours:min, which is close to Apple’s promised ten hours and a whopping 100 minutes more than its predecessor. Well done, Apple!

All new iPad mini models can now be pre-ordered now and will be delivered from 24 September 2021.

We’re impressed by the 6th generation iPad mini. The new design means it looks modern, the bigger screen is a bonus, and the improved FaceTime camera rectifies one of the biggest embarrassments of the last generation. The adoption of Apple’s leading mobile chip means the iPad mini currently surpasses the iPad Air, so, as long as you think small is perfect then it’s a great choice.