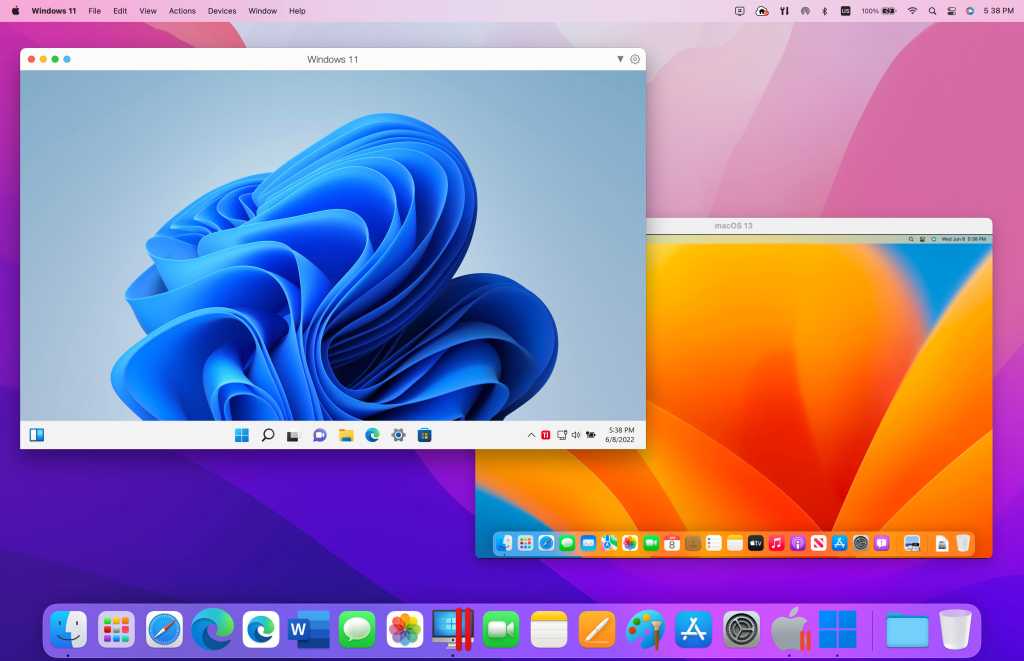 The price has increased, but there is good news for M-series Macs thanks to the simplification of the process for running Windows on ARM. The latest update cements Parallels Desktop status as the best option for Mac users who need to run Windows software on their Mac.

For many Mac users, running Windows applications is a necessity. Perhaps your employer uses software that’s available only for Windows, or requires use of a website that relies on some Windows-only technology. Or perhaps you are wanting to play Windows games on your Mac. Or maybe you need to test applications and services on alternative operating systems – the only way you can install macOS alongside Windows is on a Mac, because Apple won’t allow macOS to be installed on anything else.

When Apple moved to Intel CPUs back in 2006 running Windows on a Mac became easier thanks to the introduction of Apple’s own Boot Camp, which made it easy for users to run both Windows and macOS natively on their Mac. But times have changed and Apple has now transitioned from Intel to its own M-series chips and left Boot Camp in the past as it is not an option for M-series Macs. (Macs that still use Intel processors will still be able to use Apple’s Boot Camp to dual-boot, and switch between Windows and the macOS).

Luckily there are other options for those wanting to run more than one operating system on a Mac and one of the best is Parallels Desktop.

Parallels Desktop for Mac is an excellent solution for running guest operating systems within macOS and thanks to a regular cycle of annual updates – that generally coincide with updates to macOS itself – Parallels Desktop has ruled the roost in the Mac virtualisation market in recent years.

That’s not to say that it’s completely plain sailing. The move to the ARM-based M-series of chips also means that running a a non-ARM version of Windows is problematic. But luckily there is an ARM version of Windows, although getting hold of that has been a challenge (until now).

As always, Parallels Desktop is updated every year to coincide with the launch of the latest versions of the macOS. So, as expected, the new Parallels Desktop 18 is now compatible with macOS Ventura – both as the main ‘host’ operating system, and as a ‘guest’ virtual machine – as well as the latest version of Windows 11. But, of course, there was a problem when Apple began to introduce new Macs based on its own ‘Apple Silicon’ chips, as Parallels running on Macs with M1 or M2 processors was no longer able to run the Intel version of Windows (or to use an existing BootCamp partition to create a Windows virtual machine).

There is a version of Windows – called WoA, or Windows On ARM – that uses the same ARM technology as Apple’s M1 and M2 chips, and which could run on Macs with those chips. However, WoA isn’t normally licensed to individual users, which meant that owners of M1 and M2 Macs faced both technical and licensing problems if they wanted to run Windows on their Macs.

Thankfully, Parallels Desktop 18 finally seems to have solved these problems, and now includes the ability to download and buy the ARM version of Windows 11 directly within Parallels itself. All you need to do is:

Parallels confirmed that Microsoft doesn’t differentiate between Windows On Intel and Windows On Arm, so a Windows 11 license can be used for either version. More information on Parallels website here.

Parallels also states that Windows On ARM now allows you to run most older software and apps that were originally written for the Intel version of Windows, so you shouldn’t have any compatibility problems when running virtual machines that use Windows On ARM.

On high-end Macs, such as the Mac Studio with its M1 Max and Ultra chips, you can now configure your virtual machines to use up to 62GB of memory and 18 CPU cores, in order to provide improved performance. Unfortunately, Parallels informed us that the multiple GPU cores on the M1 and M2 chips are controlled solely by the macOS itself, so Parallels doesn’t allow you to also specify the number of GPU cores used by your virtual machines.

Other new features include support for Stage Manager in macOS Ventura, so that your Windows apps will get tucked to the side of the screen alongside all your Mac apps. There’s also improved support for USB audio and video capture devices, and even game controllers for Windows games too.

Parallels Desktop is virtualisation software that allows you to create a virtual machine – or VM – that runs Windows, and other operating systems, on your Mac as though they were another Mac app. Unlike Apple’s Boot Camp – which meant you had to shut down the Mac side of things completely and then reboot your Mac into Windows – Parallels lets you run Mac and Windows apps side-by-side at the same time.

Over the years Parallels Desktop has gained a wealth of feature that take advantage of the fact that multiple operating systems can run side by side. For example, version 17 improved the ability to copy and paste text and graphics between Windows and Mac apps, and you can drag and drop images into Windows directly from Mac applications like Photos and Safari, too.

Parallels also attempts to make things as simple as possible for the user with its Coherence mode that lets Windows apps seamlessly coexist alongside native macOS apps in, rather than inside a separate VM window.

Incidentally, you can run more than just Windows using Parallels. There are a number of supported operating systems, many of which are free to download and use, such as BSD Unix, Ubuntu, Debian and different versions of Linux. Over the years Parallels have improved support for these operating systems and made behind-the-scenes improvements that can help you to manage multiple virtual machines.

If you’ve ever wondered what Linux is all about, installing and using a version via Parallels is a relatively painless way to try it out. Download a version of Linux, set up a virtual machine, install the OS, and test it out. If you like it, keep it around. If you don’t like it, just throw away that virtual machine’s file from your hard drive, and it’s gone for good.

There is no doubt that most people using Parallels though are doing so to run Windows on their Mac and Parallels has made it super-easy to upgrade older Windows VMs to the latest version in just a few clicks.

However, running Windows has become more problematic since Apple switched from Intel to its own ARM-based M-series of chips. The X86 version of Windows will not run on ARM. Luckily there is a ARM version of Windows, and luckily, as we said above, Parallels Desktop 18 makes it easier for users to get hold of this illusive version of the operating system.

If you have an Intel Mac you’ll still be able to run most versions of Windows going right back to Windows XP. That’s not to say that there aren’t issues running Windows on older Macs. For example, Windows 11 requires a special security chip known as TPM 2.0 to run which Macs lack, but Parallels 17 found a way around this by adding a virtual TPM chip that can work with Windows 11 and its BitLocker data encryption features.

It’s not only Windows, Linux and co that you can run in your VMs. It’s also possible to run a version of macOS as both the host – the primary operating system on your Mac – and as a guest virtual machine (VM). This means that you could run the newest version (or test the latest beta version) of macOS as a VM before deciding whether to fully install it onto your Mac.

There are, again, some limitations with M-series Macs in as much as they can’t run anything older than macOS Big Sur simply because that was the first version of macOS written for an ARM-based system.

Good performance is vital when running Windows or Linux in a VM on your Mac, so over the years Parallels has made improvements to memory allocation and graphics performance.

Running two (or more) operating systems on your Mac at the same time means you need plenty of memory, disk space and – above all – processor power in order to run your virtual machines efficiently. Fortunately, modern multi-core processors can run routine apps such as the Windows versions of Microsoft Word or Excel using virtualisation with no trouble at all. You do need plenty of memory to run the macOS and Windows alongside each other though.

To get the most out of Parallels, you’ll want to give your Mac as much RAM as you can afford—1GB is a good starting point, as you’ll then have enough RAM to run Parallels alongside a few other applications. However, 2GB is much better, particularly if you’re going to run multiple OSes at the same time or run a lot of large applications within your virtual machines.

You can specify how many of your Mac’s processor cores and how much of its memory is allocated to each VM. However, that can be a little confusing for new users who aren’t familiar with virtualization technology, so Parallels 17 introduced an Automatic Resource Manager that can monitor your VMs in order to determine how much memory and processor power is required for the apps that you’re running, and then automatically allocate the required resources for you. Thanks to this feature you are not in the dark about which virtual machines are consuming precious system resources

Another helpful addition, which arrived with Parallels Desktop 14, is a Free Up Disk Space feature. While the software was already able to manually reclaim valuable storage space from individual virtual machines (VMs), this option allowed the consolidation of snapshots (which are saved states of your VMs) so that they take up less space, users can also resume/shut down tasks, and archive lesser-used VMs for even more savings.

There are several options for buying Parallels Desktop, depending on how you’re likely to use it. Fortunately, there’s a 14-day free trial available at www.parallels.com so you can try the program for a while and decide which option is best for you.

The Pro Edition, which includes additional features for developers who want to test and debug their applications, now costs $119.99/£99.99, and the Business edition, which adds a number of admin and maintenance tools for businesses and organisations, is $149.99/£119.99. These are only available on annual subscription, but the subscription does include upgrades.

Buy from Parallels in the UK

Buy from Parallels in the US

We’ll admit we were a bit worried when we heard that Parallels had been taken over by Corel at the end of 2018. After all, Corel hasn’t had a great record of supporting the Mac over the years – although the release of CorelDraw for the Mac after a gap of almost 20 years did at least suggest the company hadn’t forgotten about Mac users altogether.

Rather than simply submerging Parallels Desktop within the labyrinthine depths of Corel’s own website, Parallels continues to maintain its own identity, its own website at parallels.com, and progress has continued unabated.

Whether buying Parallels Desktop for Mac for the first time, or taking the annual upgrade plunge, I wouldn’t hesitate to install the latest version. Parallels Desktop isn’t the only virtualization software available for Macs – its main rival, VMWare Fusion, is also regularly updated – but Parallels’ is the most frequently updated and boasts the more impressive features. Parallals’ status as the leader in this field was emphasized when Apple used Parallels Desktop to demonstrate a number of Windows apps and games running on prototype ARM Macs during its 2020 Worldwide Developer Conference and if Parallels has Apple’s backing then its future should be good.