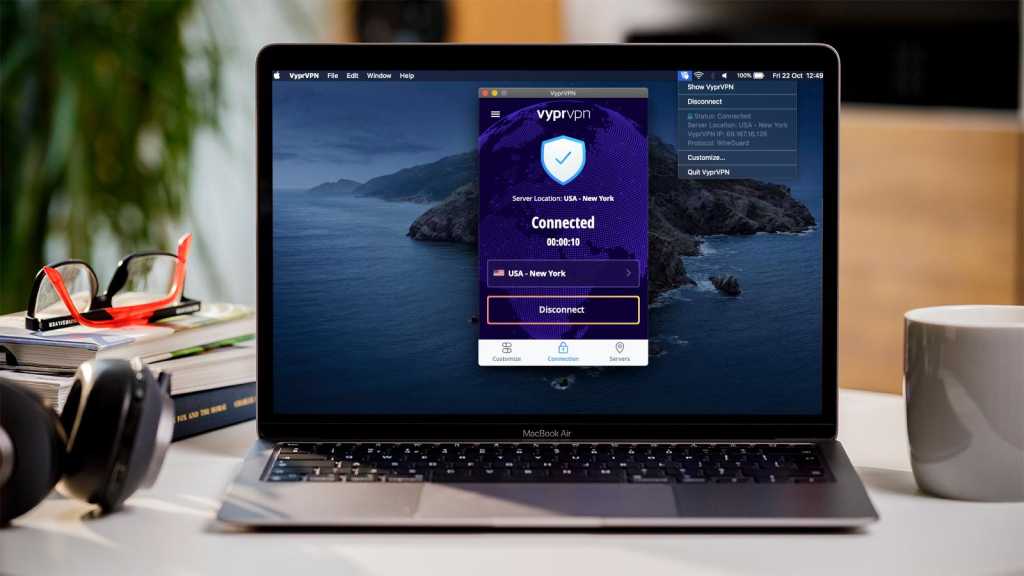 VyprVPN is an impressive affordable alternative to some of the more well-known VPN services, combining fast speeds with solid security infrastructure. More transparency over servers and better support would be appreciated, though.

We’re all using the internet more and more, but privacy online is far from guaranteed. You web browsing data can be exposed to your internet service provider (ISP), the government and a host of companies looking to deliver targeted ads.

There can be a bigger risk when using public Wi-Fi, as open networks that don’t require a password aren’t encrypted, potentially leaving you vulnerable to cybercriminals who want to steal your personal data.

Your best tool for reducing the threat is a VPN, which encrypts the connection between your device and a server on the internet. With a new IP address, the chances of any activity being traced back to you are slim. Some risk remains, though – signing into personal accounts such as social media or online retailers means you can still be tracked.

But almost all VPNs also have servers around the world, and there’s a reason for that. Connecting to one of these allows you to access geo-restricted content, whether that’s local versions of Netflix or BBC iPlayer from abroad.

VyprVPN offers a couple of advantages over rivals, despite being one of the most affordable VPN services around. But should you choose it in 2021? Here’s our full review.

At the time of writing in October 2021, VyprVPN says it has over 700 servers in more than 70 countries around the world. That’s a relatively low number by paid-for VPN standards, but all the usual suspects are here. Eight cities have their own servers in the US, alongside three in Australia. Much of Europe, South America and Asia is also covered, although you often can’t choose a specific city.

There’s also no way of telling which of these are physical and virtual servers. VyprVPN has confirmed it uses both, explaining the rationale in an official blog post. However, there’s no way of telling which are which in the app, something you will find in the Surfshark app. In fact, VyprVPN refuses to disclose how many physical/virtual servers it operates, or the percentage split.

Each location does at least provide an estimated latency figure in miliseconds (ms), giving you an idea how much speeds will be affected. All servers can be marked as ‘Favorites’ by clicking the star, meaning they’ll now appear at the top of the screen – this avoids the need to scroll through the list every time. You’ll also find a ‘Fastest Server’ option, which will usually default to the country where you’re based. 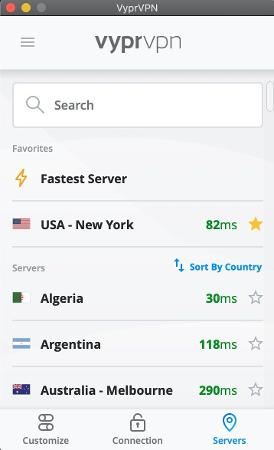 This ‘Servers’ tab is one of three available at the bottom of the VyprVPN. ‘Connection’ is self-explanatory – it just allows you to connect and disconnect from the selected server. ‘Customise’ is where you’ll find most of the other key features. 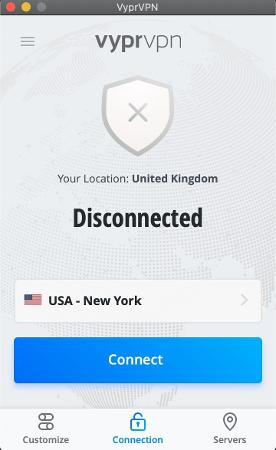 Among them is an effective kill switch, although the only customisation here is whether it stays active after you quit the relevant app. App-by-app controls are available via the split tunneling feature, known here simply as ‘Connection Per App’. This is an easy way to prevent your whole device from being affected by a VPN connection, and it works well. 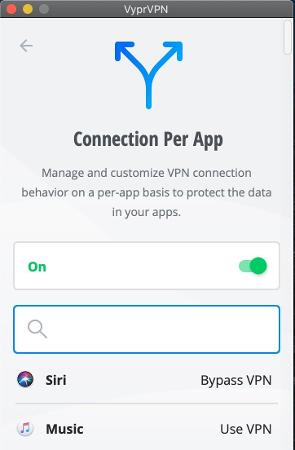 There’s also a useful ‘Public Wi-Fi Protection’ feature, which automatically connects to the VPN when using any untrusted network. You can add as many as you trust to the list as you’d like. Elsewhere, a ‘Block Malicious Sites’ toggle prevents access to webpages that VyprVPN believes could infect your device with malware. 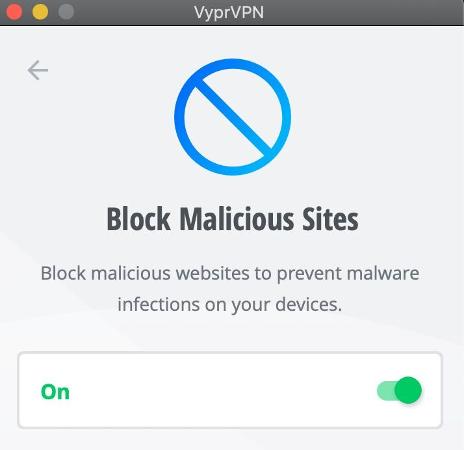 These are the key features you’ll get on macOS, where VyprVPN makes use of the Menu bar to provide quick access while using any app. However, the VPN is also available on Windows, Android, iOS, Linux, Roku, some TVs and directly on your router. A free VPN Proxy browser extension is also available for Chrome, but your connection isn’t encrypted here.

You can install VyprVPN on as many devices as you’d like, and the service offers an impressive 30 simultaneous connections. One subscription could theoretically cover multiple households.

Whichever you opt for, there’s an extensive range of help and support. Alongside various guides and help articles on the VyprVPN website, there are also forums, email support and 24/7 live chat. I tested out the latter across a range of queries, although it was quite hit-and-miss. The people I spoke to were polite and friendly, but often missed the point or avoided answering the question directly. This made for a frustrating experience, especially as they took longer to respond than similar services on other VPNs. 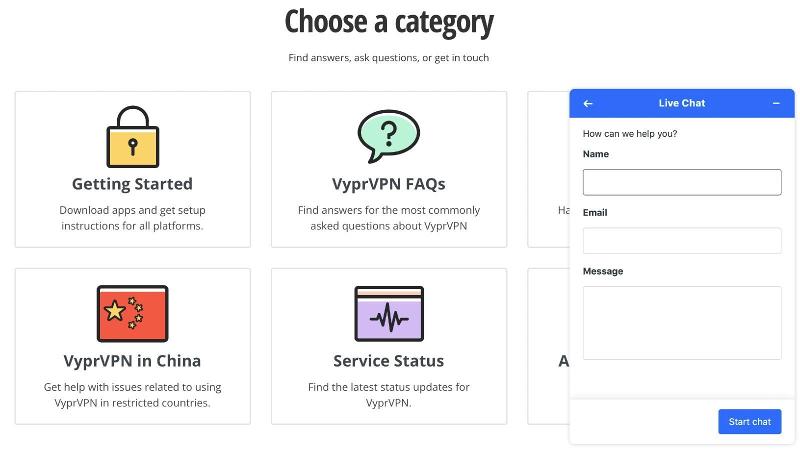 Like so many other modern VPNs, VyprVPN supports the WireGuard protocol. It’s one of three available within the Mac app, and it’s the one I’d recommend people use most of the time – both the IKEv2 and Chameleon protocols proved significantly slower in testing.

WireGuard is known for its fast speeds and impressive reliability, but it’s hard to know what VyprVPN’s implementation is capable of. Comparative analysis from VPNPro is usually an accurate benchmark, but the figures for VyprVPN are based on the slower OpenVPN protocol. WireGuard download speeds on other VPNs range from 15Mbps to over 1Gbps.

However, at-home testing does provide a useful overview of how much your usual connection speeds will be affected. For me, that was around 40Mbps for downloads and 17Mbps for uploads at 5pm UK time on a weekday, according to Ookla.

First up was VyprVPN’s ‘Fastest Server’, which usually defaults to the country where you’re based. There was barely any drop-off here, with speeds remaining consistent at around 38Mbps down and 16Mbps.

There is a noticeable decline when appearing in other locations, though. I recorded 27Mbps for downloads and 14Mbps for uploads on the New York server, where the local time was about 12pm. In Sydney (3am) there was a further decline – 22Mbps/8Mbps – this is still plenty fast enough for most tasks, though. That includes streaming the the US and Australian versions of Netflix, which worked fine. Just make sure you sign in without a VPN connected first, as errors appeared without taking this step. 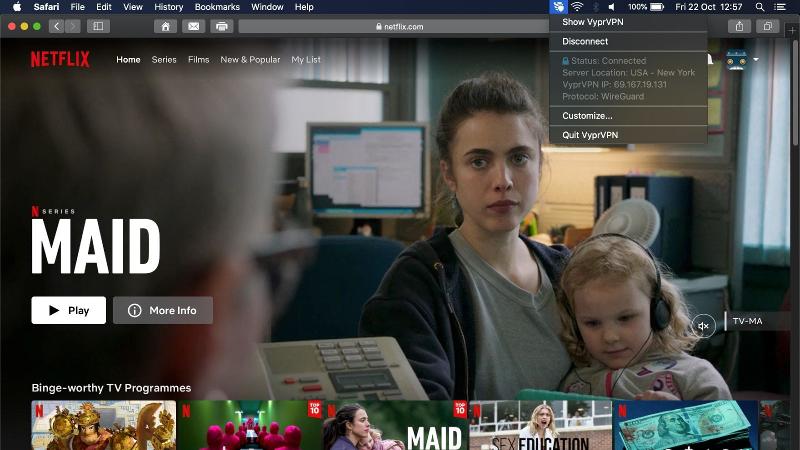 Testing of other locations revealed some interesting results. I recorded identical download and upload speeds in France (6pm) as New York, albeit with much lower ping. Brazil (1pm) was the most affected in terms of downloads at 11Mbps, but uploads remained stable around 11Mbps too. The closest you’ll get to China is a Hong Kong server, where I recorded 14Mbps/5Mbps.

For most tasks, none of speed drop-offs will cause serious problems, unless your connection is significantly slower than mine. You may notice that ping is significantly higher with increased distance from your actual location, but that mainly affects online gaming.

Elsewhere, if you’re looking to access UK content from abroad, VyprVPN is a great option. A colleague based on France confirmed that it unblocks both BBC iPlayer and ITV Hub without issue. The latter is often a sticking point for modern VPNs, so it’s great to see here.

VyprVPN is based in Switzerland, like its parent company Golden Frog. The country’s strong privacy laws make it a good choice, including the fact that it’s outside the so-called ‘14-eyes’. This an alliance between 14 countries around the world (including the UK, US and Australia) to share important security information.

This could be considered counter to the main purpose of a VPN – protecting user privacy. It means there’s almost no chance of the Swiss government requiring VyprVPN to hand over user data.

Even without this extra layer of security, VyprVPN operates a strict no-logs policy. This means sensitive data such as online activity and payment details are never stored. This has been verified via an independent audit from US company Leviathan Security, with the document published in 2018. With no update on the horizon, we’ll have to take VyprVPN’s word for it that these practices continue, although there’s no reason to believe otherwise.

The no-logs policy is one aspect of Golden Frog’s detailed Privacy Policy, which was last updated in March 2021. It also mentions the limited personal data that’s associated with your account, explaining that it will retain it “only for as long as is necessary”. This can include similar products, services and events which may be of interest, but users can opt out of this at any time.

When signing up to VyprVPN, you don’t need to hand over many details. Aside from payment information, this is just your full name, email and a created password.

VyprVPN is also a member of the VPN Trust Initiative (VTI). Alongside parent company Golden Frog and 12 other brands, the VTI aims to promote “privacy and security through VPNs”. It has strict eligibility requirements that all members must adhere to.

VyprVPN subscriptions are impressively affordable. I’d recommend most people avoid the two-month plan unless you only need short-term access, although at £4.66/$6.47 per month it’s far from extortionate. But if you can commit to 18 months (£1.83/$2.50pm) or 36 months (£1.36/$1.81 pm), it represents excellent value for money. Unlike some other services, this isn’t an introductory deal – renewal prices remain the same.

Indeed, very few premium VPNs offer prices this low. VyprVPN undercuts many of the best Mac VPNs on price, including current #1 Surfshark – a service renowned for its affordability.

On all plans, you’ll find what VyprVPN is calling a 30-day free trial. In reality, this just means you’ll get the money back you’ve already paid if you cancel within a month of signing up.

It won’t be a dealbreaker for most people, but there are only two main options when it comes to payment – credit/debit card or PayPal. That means you can’t pay using cryptocurrencies such as Bitcoin or Dogecoin.

If you’re in the market for a new VPN, there aren’t many better options than VyprVPN. It offers everything most people will need, including fast WireGuard speeds and the ability to unblock key streaming services. A simple but effective Mac app includes premium features such as split tunneling and a kill switch, even if the latter isn’t customisable.

It’s not all good news, though. There isn’t quite the same range of servers you’ll find on other services, and there’s no way of finding out which of these are physical or virtual. Extensive support is available, but the 24/7 live chat often proved more frustrating than useful.

Anyron’s main focus is PCs and laptops. Much of the rest of his time is split between smartphones, tablets and audio, with a particular focus on Android devices.