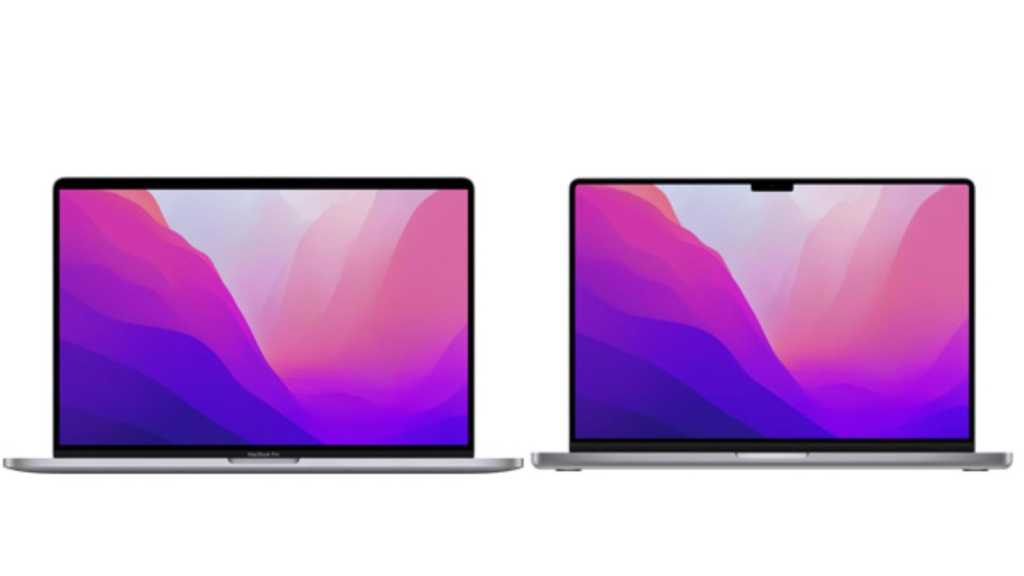 Now that Apple has revealed the 16in MacBook Pro with M1 Pro or M1 Max you might be looking at your old maxed out 16in MacBook Pro and wondering if it’s time to upgrade. Perhaps even the 14in MacBook Pro would be better? Here is the comparison that will help you make the decision.

When the 2021 MacBook Pro was unveiled in October 2021 it was apparent that Apple had listened to the users. Many of the things that were complained about were fixed and we even got back some of our old favourites that had been rationalized away.

But no matter how attractive the new model is, the old model is still fast compared to many competing models. Is it really worth the money to upgrade?

For once, a new model does not mean that everything has become smaller, narrower, thinner and lighter. The new model is actually a couple of millimeters larger on both side and a millimeter thicker, as well as 150 grams heavier! The fact that it does not have beveled edges actually makes it feel even thicker. Not much to argue about as this model is not intended to be ultraportable. 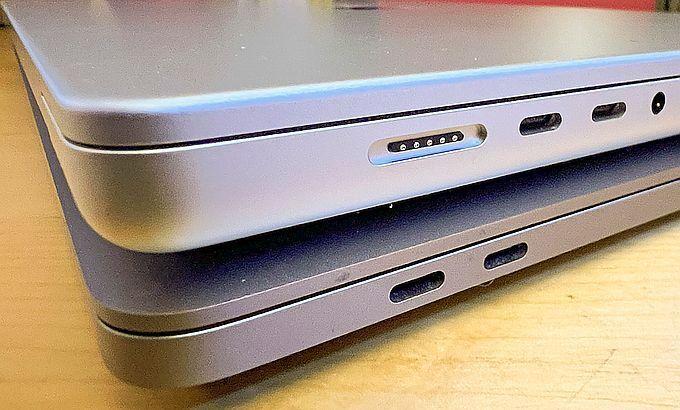 On the other hand, the screen edges have become narrower, which means that the new Mac has been fitted with a slightly larger screen in the same space. However, this has led to one of the bigger controversies because in order to do so Apple has made the camera sit in a notch just like on the iPhone. Terribly ugly, many exclaimed. Destroy the menu bar, shouted others. We predict that in a year, everyone will have got used to it, because in fact it is not that big a deal.

Speaking of the screen, it has become slightly larger, 16.2in compared to the previous 16in inches. More importantly, the resolution has also increased from 3,072 x 1,920 pixels to 3,456 x 2,234 pixels, which has also increased the dot density from 226 ppi to 254 ppi. We have also received ProMotion with adaptable update frequency up to 120 Hz for smoother scrolling. 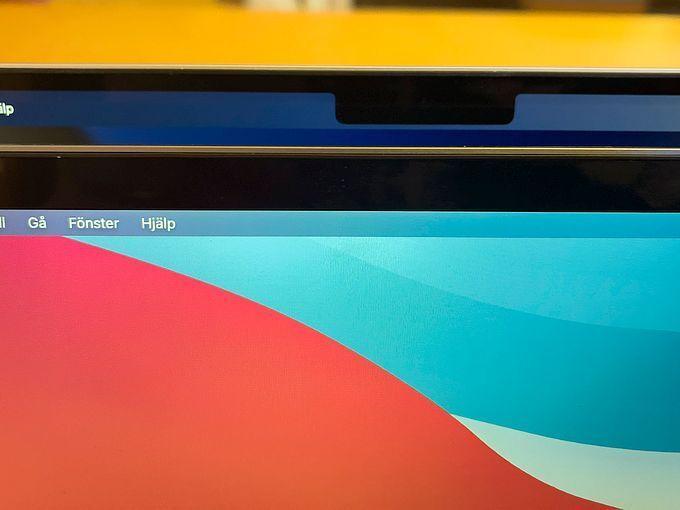 But what really matters is that the screen has been upgraded from old tired LED backlighting to mini-LED. It provides better contrast and local dimming for HDR materials. In addition, the brightness has increased from a moderate 500 cd / m² to 1,000 cd / m² with local peaks of 1,600 cd / m²! It already has a P3 color gamut.

Thanks to all these upgrades it is much nicer to work with high-resolution images and in fact more than acceptable to edit HDR material without having to resort to an external monitor.

After the disaster of the butterfly switches on Apple’s keyboard buttons, the previous model had a reliable scissor mechanism for its keyboard. Thankfully, the new model retains this with a slightly longer stroke and a good typing feel.

The big difference is in the top row, where there is no longer an annoying Touch Bar. There are now quite ordinary, old, honest function keys. Hallelujah! We also got a real Esc button and a larger Touch ID button to be able to log in with fingerprints. 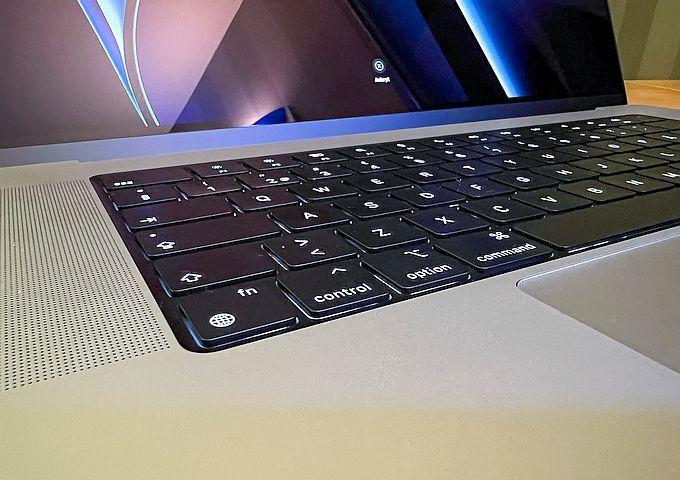 What most people were even more annoyed about with the previous model, however, was that the connections consisted of four usb-c ports with Thunderbolt 3. That was all. Which led to most of us needing to carry lots of adapters in our bags if we were not to be left helpless. In the new model, we have got the HDMI port and a memory card slot back! In addition, MagSafe charging is back so we do not have to pull the laptop on the floor when we trip on the cord.

The most striking difference, however, is the new Apple-designed system on chip, whether you buy the model with M1 Pro or Max.

However, it is the heavily upgraded graphics part of the M1 Max that impresses the most. According to GFX Bench Aztec, it is 323 percent faster! The Cinebench R23 is not as impressive, but still shows a significant improvement of 35 percent. At that time, our older model still had an AMD Radeon Pro 5500M graphics circuit.

The new SSD disk is also no joke. According to the BlackMagic test, reading performance has increased by 220 percent and writing performance by 236 percent. It isn’t as if it was really slow before.

To get a more realistic feeling for how much faster the computer feels, we also ran Basemark Web, which assesses how fast the browser can run code on web pages. There we got a twice as high result! 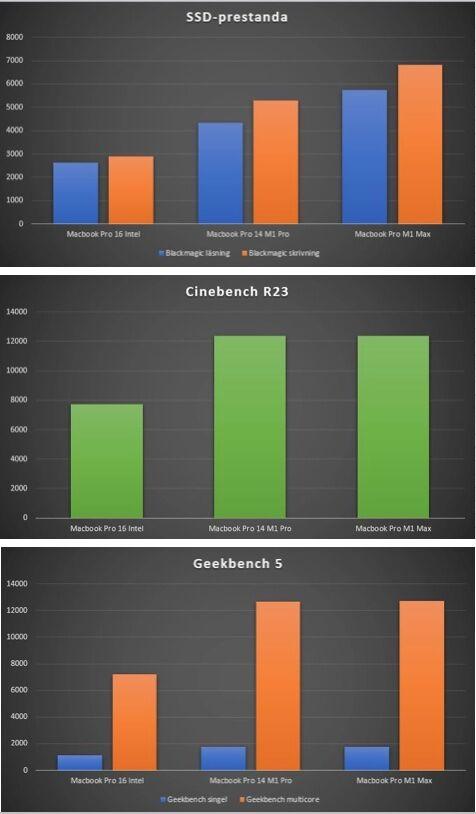 We’d recommend that there is no reason not to buy the 2021 MacBook Pro with M1 Pro or M1 Max chip.

So it follows that we’d recommend that you don’t buy an Intel MacBook Pro if you see on on sale – unless its a really good deal, or you simply have to have an Intel chip.