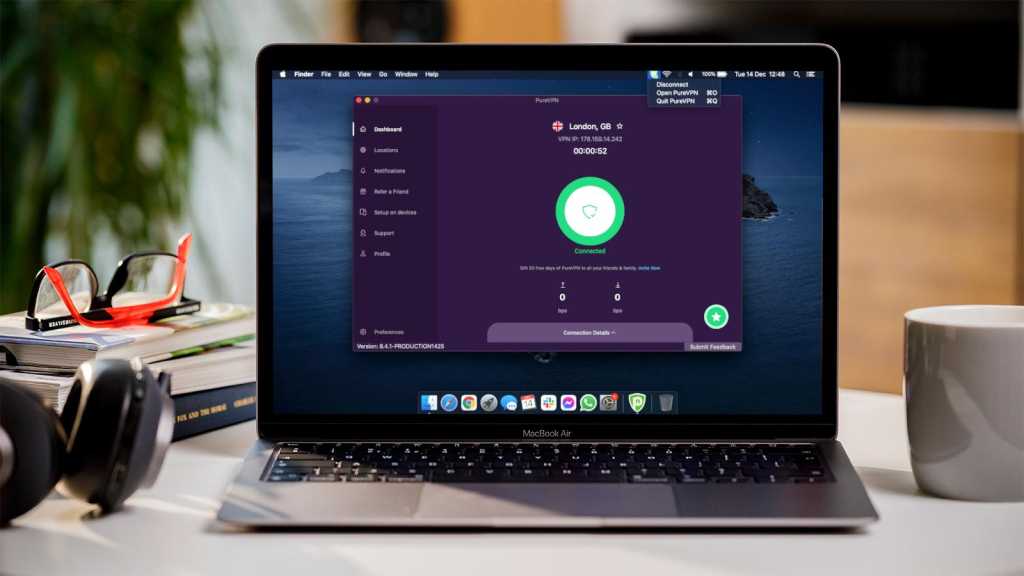 PureVPN is an affordable VPN with a lot of potential, but Mac users miss out on two key features you’ll find on the Windows app – split tunneling and support for the WireGuard protocol. Despite all its strengths, that makes it hard to recommend.

With so much of our lives online these days, a VPN has never been more important. Without one, your internet activity is exposed and potentially visible to your internet service provider (ISP), the government or companies keen to deliver targeted advertising.

This lack of privacy online is a big concern, but your personal data might be at risk too. If you ever use an unsecured connection (such as public Wi-Fi), cybercriminals can breach the weak security and steal your information.

A VPN helps prevent that by encrypting the connection between your device and a server on the internet, giving you a new IP address that can’t be traced back to you. It’s not foolproof, though – signing into sites such as Google or Amazon means you can still be tracked.

VPNs are also commonly used to unblock geo-restricted content, whether that’s local versions of Netflix or BBC iPlayer from outside the UK.

Most premium VPNs can do both with ease, but how does PureVPN stack up to the competition in other areas? As it turns out, the experience varies significantly depending on the device you’re using.

At the time of writing in December 2021, PureVPN allows you to connect to more than 6,500 servers around the world. These servers are based in 96 locations across 78 countries, with options in all six main continents.

In most countries you’re limited to just one location, but this shouldn’t be a problem for most people. The only exceptions are the UK, US, Canada and Australia, where you can choose a specific city. 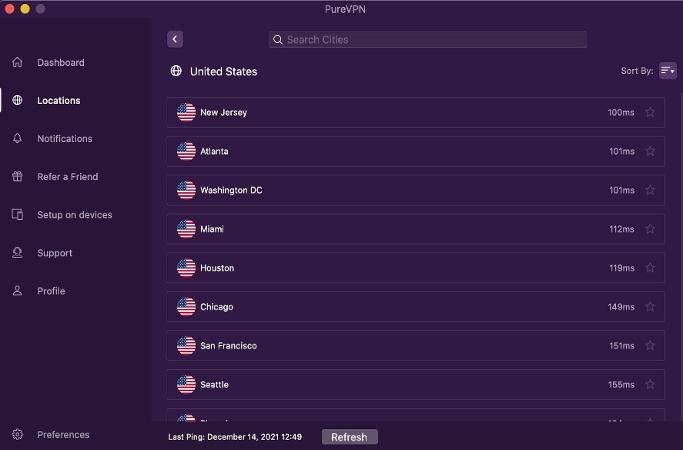 The majority of servers are physical – where PureVPN has an actual presence in the country you’re connecting to. A total of 69 servers are virtual instead, although this accounts for only 1.3% of the total.

The difference between physical and virtual servers is that VPN companies typically have less control over a virtual server as they are usually rented from a datacentre. One point in PureVPN’s favour is the fact that they are transparent about which servers are virtual and which are physical. Except that is not the case for Mac users – virtual servers aren’t indicated within the Mac app, but you can see a small ‘v’ next to each virtual server on the PureVPN website.

What you will see next to some servers in the app is a small ‘P2P’ badge. This means it’s compatible with peer-to-peer, a popular private file sharing method. However, this is often used for illegal torrenting of copyrighted material.

The design of the PureVPN Mac app is quite different to many other VPNs. While the main ‘Dashboard’ section offers a quick and easy way to connect and disconnect from servers, ‘Locations’ provides a wealth of information about servers that are available. 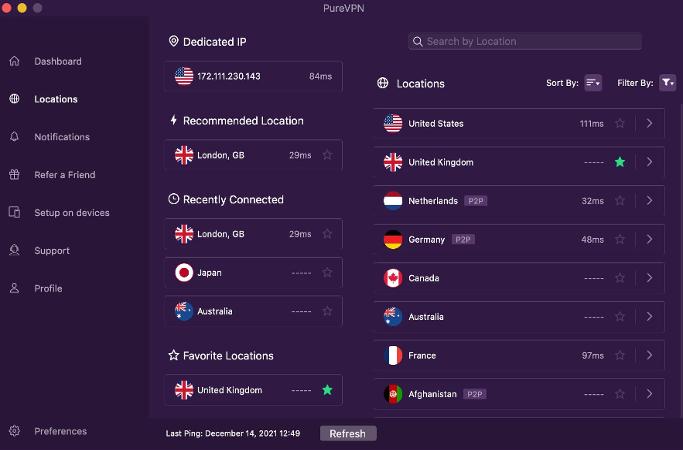 On the left half of the screen, you’ll find the Dedicated IP feature, allowing you to keep the same IP address rather than being allocated a new one each time. However, this costs an extra $1.50 (approx. £1.13) on top of your subscription cost – for most people, it’s not worth it.

Your ‘Recommended Location’ aims to provide the smoothest possible experience – usually a city near where you’re based. ‘Recently Connected’ is self-explanatory, while your list of ‘Favorite Locations’ can be customised by clicking the star icon next to any server.

A vertical list of all available locations on the right side feels overwhelming at first, but it’s helped by powerful search function. You can also sort by name, popularity, ping or only those which support P2P.

Nonetheless, the ‘Locations’ tab still feels too cluttered in my opinion. That’s emphasised by many of the other main sections in the Mac app, which offer no real value during day-to-day use. Notifications, support, basic profile information, links to download on other platforms and the option to refer a friend could all stay on the website or be found in Settings.

As it stands, the Preferences menu is where you’ll find the only other main feature – a kill switch. This works effectively but can’t be customised to only apply to specific apps. It’s either on or off. 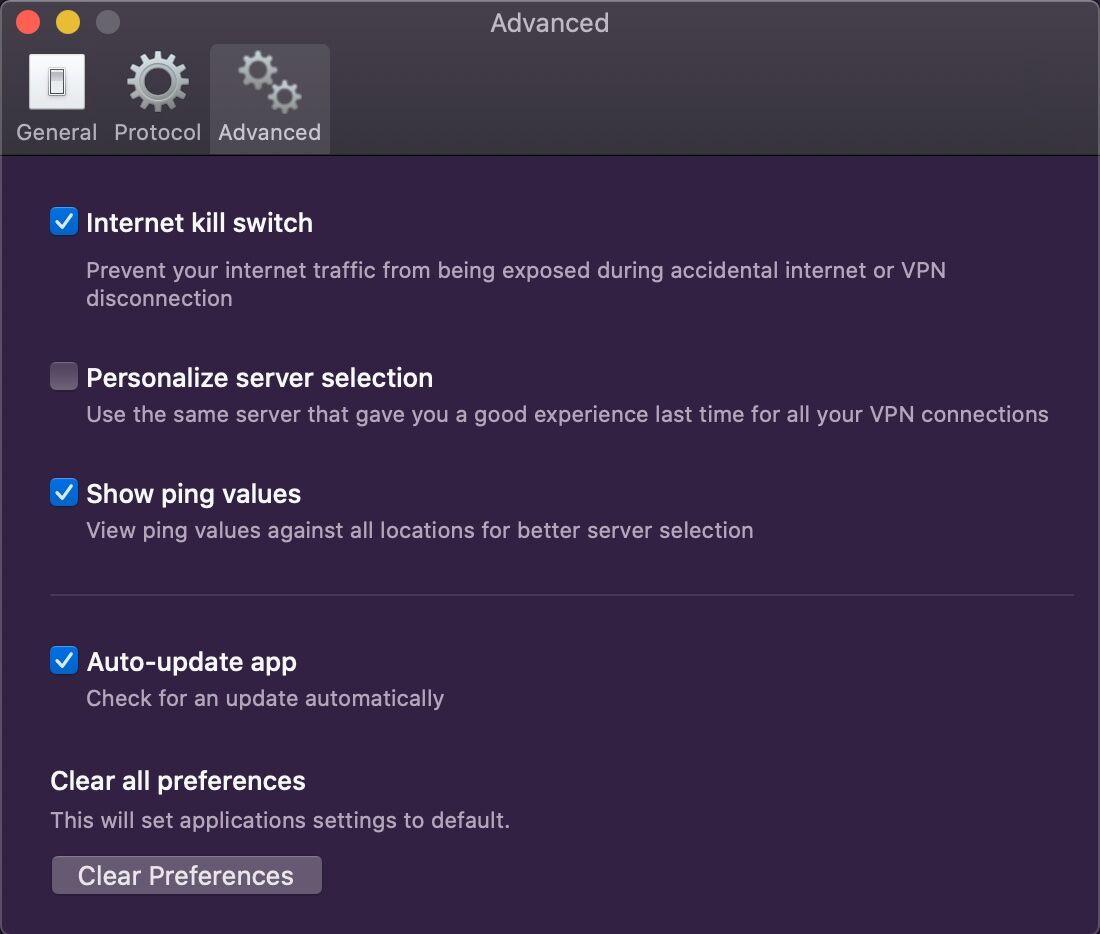 However, just as significant are the features you’re missing out on. The Mac app doesn’t have split tunneling or the new WireGuard protocol, despite both being available on Windows and Android. You’re also missing out on iOS, making it feel like Apple devices have been an afterthought. Many competing services offer these features across all platform, making their omission here more difficult to understand.

It’s a real shame, as PureVPN’s device support is excellent. Alongside dedicated apps for all the platforms mentioned above, it’s also compatible with the likes of Android TV, Fire TV Stick, Linux and many routers. There are browser extensions for Chrome, Firefox and Edge too, although these are just proxies so won’t encrypt your connection.

You can install the app on up to 10 devices per account, with the option to run all 10 simultaneously. The latter is particularly impressive, and more than you’ll find on most VPNs.

PureVPN hints at the support available within the app, but it’s on the website where you’ll find a full ‘Support Center’. This includes a range of help articles broken down by category, as well as an email-based ‘ticket’ service and 24/7 live chat support.

My experience with the latter was fairly positive, despite responses taking slightly longer than on some other services. After a brief back and forth with a bot, the staff member I spoke to was polite and answered all my questions with plenty of detail. He also encouraged me to submit any ideas for changes, which could help shape the future of the app. 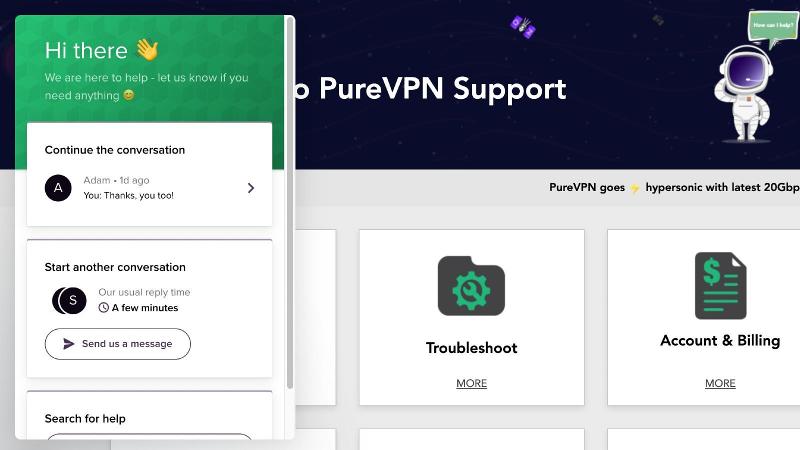 As I mentioned above, PureVPN doesn’t support the new WireGuard protocol on the Mac app – it’s only available on Windows and Android. Instead, you’ll have to rely on either IPSec or IKEv2. These are both OpenVPN protocols, with VPNpro suggesting the service can hit a maximum download speed of 204Mbps.

That falls well short of the fastest WireGuard VPNs on the list, but I couldn’t verify any of this data with my home Wi-Fi connection. Therefore, home testing simply indicates how much usual speeds are affected by connecting to the VPN.

With no VPN connected, I recorded 28Mbps for downloads and 13Mbps for uploads using Ookla’s speed test. For the duration of testing, I set PureVPN to ‘Automatic Protocol Selection’, which supposedly chooses the most appropriate protocol at any given moment. 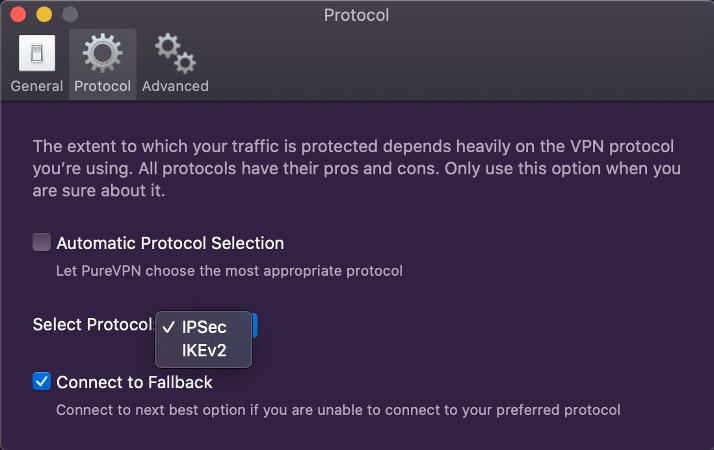 At about 3pm UK time, I then connected to the so-called ‘Recommended’ server based in London – where I’m based. It dropped speeds more than I’d expect, down to 18Mbps/12Mbps.

The US server defaulted to Phoenix (8am local time), where I recorded 18Mbps/9Mbps. It unblocked Netflix, providing access to the local content library. I couldn’t watch The Office (US) anymore, which is only available via NBC’s Peacock streaming service in the US.

The dedicated IP feature shifted me to New York (10am), where speeds were encouraging: 16Mbps/15Mbps.

In Japan, a Tokyo (12am) server performed well considering how far away I am – 15Mbps/8Mbps. However, Netflix didn’t provide access to anime I know to be exclusively available in Japan.

Impressive performance extended to Perth, Australia (11pm), with speeds of 21Mbps/11Mbps. Interestingly, this did allow me to access shows only available on Australian Netflix.

Speeds remained fairly stable with increased physical distance, but ping rises dramatically. However, it’s unlikely you’ll notice unless gaming online, and most locations give an indicator of the ping you can expect.

In general, connecting different servers was a smooth process, although it did take as long as 20 seconds for some servers a long way away. A few times, I got a pop-up saying “the negotiation with the VPN server failed”, although it connected successfully soon after.

It’s a mixed bag when it comes to accessing UK-based content from abroad. Via a colleague based in the US, I confirmed that both BBC iPlayer and ITV Hub work without issue. However, Netflix managed to detect we were using a VPN, displaying the following message: 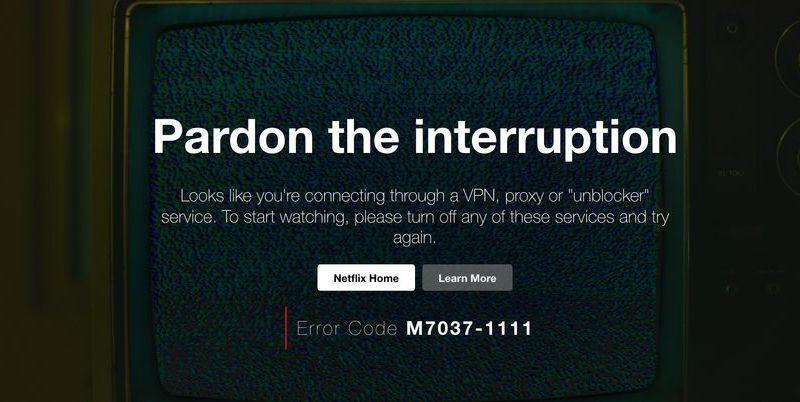 This isn’t something I’ve seen while using a VPN before, but could suggest Netflix’s detection methods are becoming more sophisticated.

In 2021, PureVPN moved its headquarters from Hong Kong to the British Virgin Islands (BVI). The former had become an issue in the wake of China’s National Security Law, which allowed authorities to demand personal data is handed over.

There’s no such issue in the British Virgin Islands, a British Overseas Territory in the Caribbean. Unlike the UK, US, Australia and 11 other countries around the world, it’s based outside the so-called ’14-eyes’. Each member is required to freely share security information between one another – that’s exactly what a VPN is usually trying to avoid.

The British Virgin Islands also have no data retention laws, meaning there’s almost zero chance of PureVPN being required to hand over user information. Even if it did, the company operates a strict no-logs policy, with online activity and payment details never recorded or tracked.

Since committing to no-logs in 2018, PureVPN’s policy has been verified twice via independent audit. The first was in August 2019 by US company Altius IT, before it became KPMG certified in August 2021. What’s more, PureVPN claims to be the first and only VPN with an Always-on audit. This means KMPG can carry out any future audits with no prior warning.

This gives users extra peace of mind, especially when combined with a robust Privacy Policy. Dated September 2021, it says the “minimal data” collected is only used to “operate our VPN and Proxy service and keep it running smoothly”. New customers are only required to provide an email address, password and payment information – that’s it.

PureVPN is also a member of the VPN Trust Initiative (VTI). Alongside 13 other brands, it’s designed to promote “privacy and security through VPNs”. To be eligible for the VTI, each company must also adhere to best practices on advertising, disclosure & transparency and social responsibility.

See the full range of plans on the PureVPN website.

PureVPN is also currently advertising what it calls a ‘ secret deal‘. If you’re willing to commit to a five-year plan, the price drops to an impressive $1.50 (approx. £1.13) per month. That makes it one of the most affordable paid VPNs you can buy.

PayPal and all the usual credit/debit card providers are supported, while you can also pay using cryptocurrency. Bitcoin, Litecoin and Ethereum can all be used, but payments here are non-refundable.

PureVPN is an affordable VPN that offers everything most people are looking for – provided you’re not using an Apple device. The Mac and iOS apps miss out WireGuard protocol and split tunneling, features you will find on Windows and Android.

Using IPSec or IKEv2 protocols means speeds suffer slightly as a result, and it often took over 10 seconds to connect to some servers. Missing out on app-by-app controls is a big blow though, especially when the kill switch can’t be customised either.

It’s a real shame, as PureVPN ticks plenty of boxes in other key areas. The app is easy to use and offers some useful controls, while there’s an excellent range of support available. Its security credentials are among the best I’ve seen, especially with the recently introduced Always-on audit. You can also unblock the likes of BBC iPlayer and ITV Hub just fine, something other services have struggled with.

But for Mac users, it’s hard to recommend an app that’s missing some key functionality. PureVPN has clearly prioritised the Windows platform, with plenty of other VPNs offering a more complete service for the Mac.