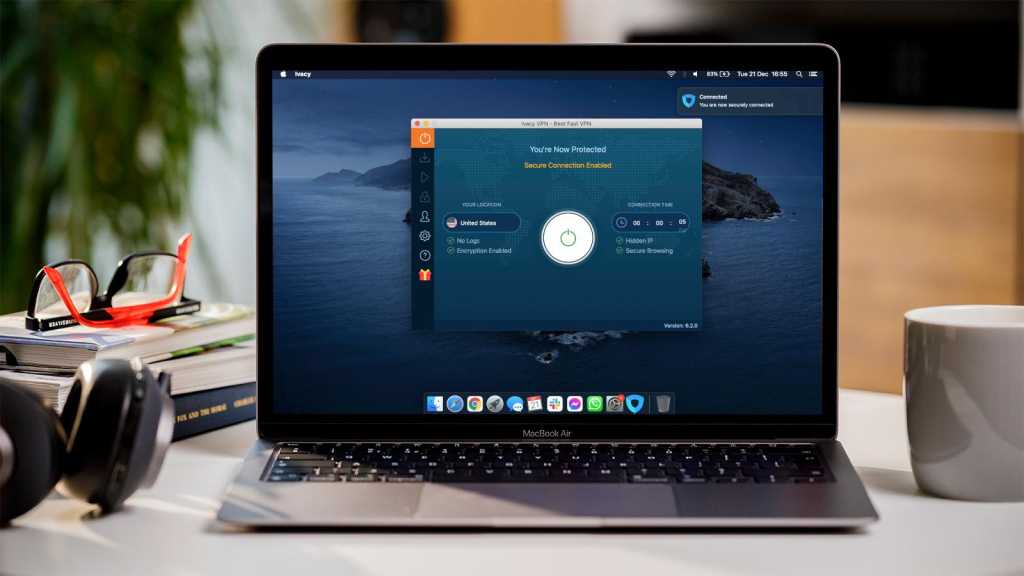 Ivacy shows promise with impressive unblocking performance and a low monthly price, but the Mac app is a pale imitation of the Windows version. It’s worth spending slightly more for a far superior experience.

Many of us spend several hours every day using an internet-connected device. We often rely on them to for work, shopping and staying in touch with family & friends, especially during the pandemic. Online privacy should therefore be a top priority, but that’s not the case by default.

Your internet service provider (ISP), the government and any site where you agree to provide cookies can track you across the web. If that’s not bad enough, using unsecured connections such as public Wi-Fi leaves you vulnerable to sophisticated cybercriminals intent on stealing your personal data.

The most effective protection against this is a VPN, which encrypts the connection between your device and a server on the internet. This gives you a new IP address which can’t be traced back to you, but doesn’t provide complete anonymity – signing into sites such as Google or Amazon means you can still be tracked.

You might have also heard about a VPNs other purpose – unblocking geo-restricted content. Netflix’s library varies by country and BBC iPlayer is only available if you’re based in the UK, but a VPN lets you access it all.

Free VPNs are tempting, but all are limited in some way. Whether it’s slow speeds, sub-par security or a lack of servers in locations you actually want, it’s worth investing in a paid service. Ivacy is one of the most affordable VPNs you can buy, but does it sacrifice too much to reach this low price point?

At the time of writing, Ivacy has more than 3,500 servers in over 100 countries around the world that you can connect via. These stretch across most of the globe, with all six main continents well represented. Crucially, all the most popular locations are here, with a choice of cities in the UK, US, Australia, Canada and more.

Almost all servers are physical, meaning Ivacy has an actual presence in the associated city. A handful are virtual instead, with the company renting it from a datacentre. That gives Ivacy slightly less control, but doesn’t necessarily mean it’s any less secure. Speeds will vary depending on the physical server where the connection is being hosted. 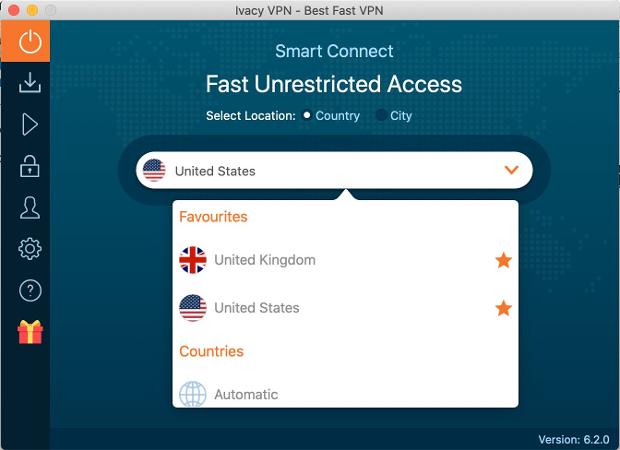 Each virtual server is indicated with a V – it’s one element of the Mac app that’s easy to use. The main screen is known as Smart Connect and is designed to get you connected as quickly as possible. You can filter the drop-down menu by country or city, or hit the star next to any location to add it to your favourites.

Ivacy has a separate Secure Download tab, but it’s only activated when you turn on the toggle. This limits you to just a handful of European countries, but location probably isn’t important if downloads are your top priority. 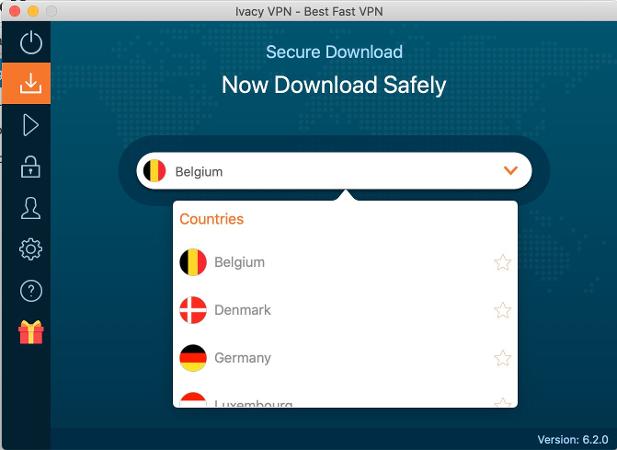 The next section is focused on streaming, something Ivacy excels at. You can connect to countries around the world, or just choose one of the listed services you’re trying to access. The HBO Max and Hulu servers worked well here, but I couldn’t access Netflix US (from the UK) using this method. 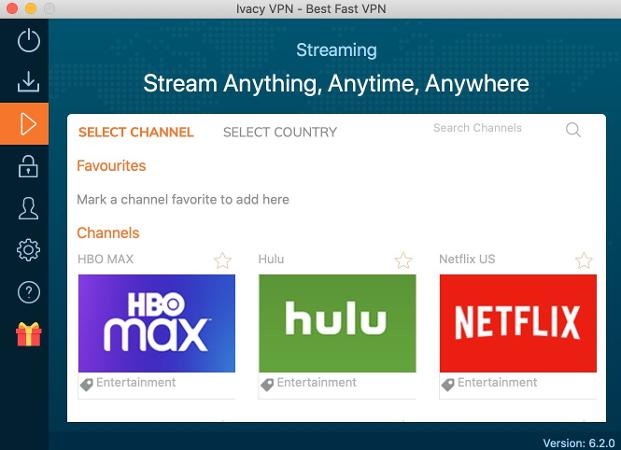 If you want to watch local versions of Netflix, your best bet is the next section: Unblocking. Servers in various countries unblock the streaming service just fine, as well as any other geo-restricted content. 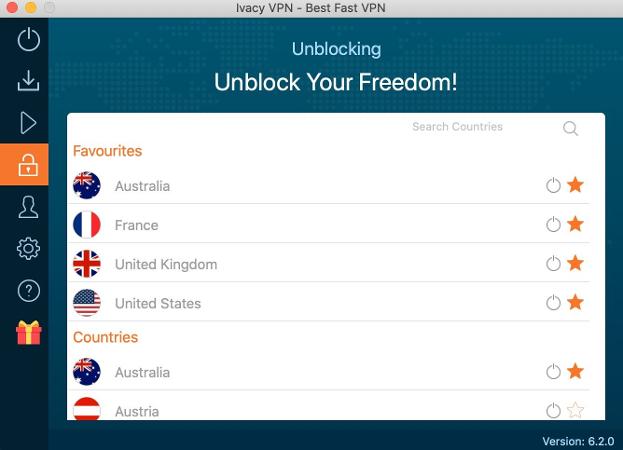 My Account offers a brief overview of your subscription, while you can also access support or refer friends via the app. However, I was very disappointed by the Settings menu. Rather than offer controls for the other features Ivacy offers, there are only a handful of basic options here. 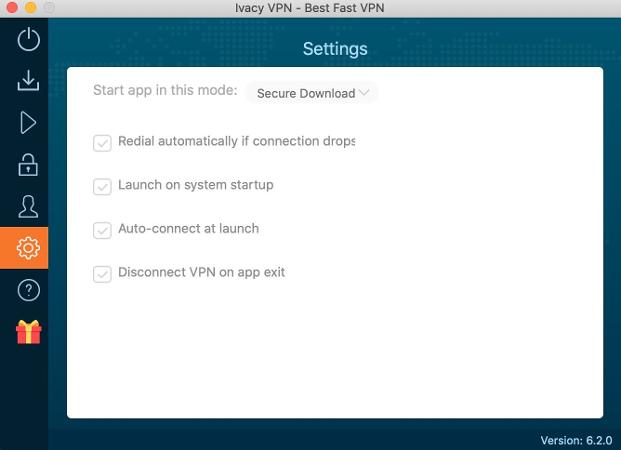 It reflects a Mac app that’s extremely underpowered compared to other platforms. IPSec is your only protocol option, while Windows offers a choice between TCP, UCP and IKEv2. There’s no WireGuard protocol – that’s an Android-exclusive for now.

Both those platforms also benefit from split tunneling and a kill switch. These are VPN staples that Ivacy has inexplicably decided to leave out of the Mac app. I don’t understand why.

Dedicated IP is one feature that’s available across all the main platforms, but you’ll have to pay an extra US$1.99 (same price internationally) per month for it. For most people, using the same IP address each time you connect isn’t important.

The main platforms I mentioned above – Windows, Android, iOS and macOS – are where you’re most likely to use Ivacy, but the device support doesn’t end there. It’s also available on Huawei’s AppGallery, Linux, Android TV, Fire TV Stick, Kodi and your router. There are even browser extensions for Chrome, Firefox and Edge, although these are proxies so won’t encrypt your data.

Each account can be used on up to 10 devices, with support for five simultaneous connections. It makes it easy for everyone in the family to use the same subscription.

Ivacy also impresses when it comes to customer support. On its website, you’ll find a wide range of support articles and platform-specific guides. If that doesn’t solve your problem, you can create an email ticket or access a 24/7 live chat service.

I tried both while testing the service, with replies via email taking a few hours and live chat responses within a couple of minutes. The people I spoke to were polite and didn’t withhold any information from me, despite revealing some of the missing functionality on the Mac app.

Unlike many other paid VPNs, Ivacy doesn’t support WireGuard. Curiously, the protocol is only available on the Android app – it’s not clear when (or indeed if) it will arrive on other platforms.

Unfortunately, you don’t get any choice when it comes to VPN protocol on Mac. IP-Sec is your only option, although I was pleasantly surprised by its performance in testing.

My home Wi-Fi severely limited the speeds possible, so a better indicator is the drop-off you can expect when connected to the VPN. At around 11am UK time with no VPN connected, I recorded 37Mbps for downloads and 9Mbps for uploads using Ookla’s popular speed test tool.

The UK server defaulted to London, around 100 miles away. Speeds stayed steady here at around 35Mbps/8Mbps. Interestingly, the ‘Automatic’ setting defaulted to the US, specifically Ashburn in Virginia (6am local time). That’s where I recorded 34Mbps/8Mbps and was able to watch the US version of Netflix.

Interesting, the US server specifically designed for Netflix didn’t work at all. The dedicated HBO Max and Hulu servers were more successful, allowing me to access screens which are usually blocked. 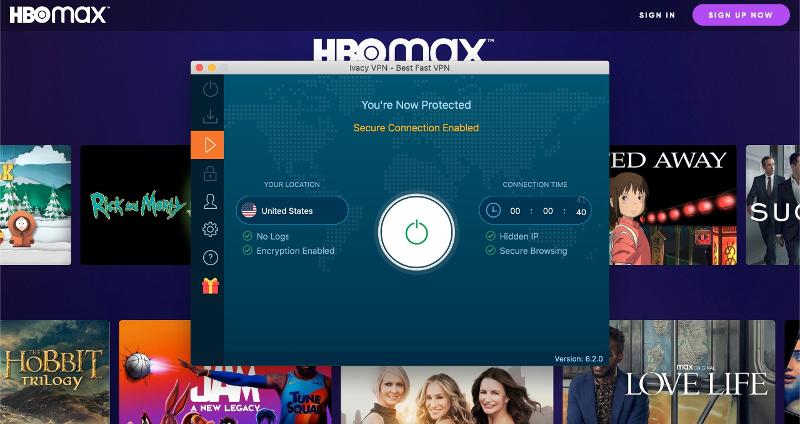 An Australian server in Melbourne (10pm) kept downloads steady at 29Mbps, but uploads took a big hit – down to just 2Mbps. It was a similar story in Tokyo (8pm), with speeds of 34Mbps/2Mbps. Both unblocked the local versions of Netflix, although the Japan server loaded content much slower than you’d expect.

The closest you’ll get to China is Hong Kong, where Ivacy does have a physical presence. 26Mbps for downloads is in keeping with other results, but 6Mbps for uploads is better than expected. It also unblocks the Hong Kong version of Netflix.

Chile is one the locations limited to a virtual server. Speeds took a bit hit when appearing in Santiago, down to 8Mbps/2Mbps. You can still access Chilean Netflix, but that drop-off will make it difficult on slower connections.

However, it’s good news if you’re hoping to watch UK-based streaming services from abroad. Via a colleague based in France, I confirmed that Ivacy unblocked both BBC iPlayer and ITV Hub – this can be a sticking point for some VPNs.

Ivacy is based in Singapore. That satisfies one of the main criteria for a modern VPN – being based outside the so-called ’14-eyes’. This is an alliance between the UK, US, Australia and 11 other countries around the world to freely share security information with each other.

Considering one of the main purposes of a VPN is privacy, it’s no wonder Ivacy has decided to base itself elsewhere. Singapore also has no data retention laws, meaning there’s almost no chance of Ivacy being required to hand over user data.

Even if that ever happened, the company has a strict no-logs policy, meaning your online activity and payment details are never tracked. This works in tandem with the company’s Privacy Policy, which states it strictly conforms to GDPR regulations and never sells user data. It collects a limited amount of data on your activity while connected, but this can never be traced back to you.

However, unlike many other VPNs, Ivacy has never been independently audited by a third-party security company. That means you’ll have to take the company’s word for it that these practices take place, although there’s no reason to suggest the situation is any different.

The closest you’ll get is a review from Security.org, which gave it a Privacy Rating of 7.4/10.

Ivacy is also a member of the VPN Trust Initiative (VTI). Alongside 13 other brands, it aims to promote “privacy and security through VPNs”. The VTI also requires each member to comply with best practices on advertising, disclosure, transparency and social responsibility.

One of the big attractions of Ivacy is its price. Paying US$9.95 for one month’s access doesn’t make much sense, but the two-year ( US$1.99 per month) plan becomes much more affordable. If you’re willing to commit to five years, you’ll pay just US$1.00 per month and get a free password manager.

See the full range of plans on the Ivacy website.

There are a huge variety of different ways you can pay for Ivacy, too. Regular credit card, debit card and PayPal options are joined by cryptocurrencies and many more.

Whichever way you pay, it’s one of the cheapest VPNs for the Mac, but the experience on Apple computers leaves a lot to be desired. For most people, it’s worth spending more to get a more complete experience.

Ivacy is a compelling VPN service – provided you don’t use Apple devices. For some reason, the company has decided to withhold many of the best features from the Mac app. It means there’s no WireGuard or even a choice of protocols, no split tunneling and no kill switch. Ivacy offers all this functionality on other platforms, making it harder to overlook.

That’s not to say Ivacy on the Mac doesn’t have its strengths. The IPSec protocol delivers impressive speeds, while it’s great to have servers specifically designed for unblocking streaming services. Customer and device support are also key strengths.

But ultimately, it feels like you’re giving up a lot on the Mac in exchange for a low price. Unless you only plan on using a VPN for very basic tasks, you’ll find much better value for money paying just slightly more each month.