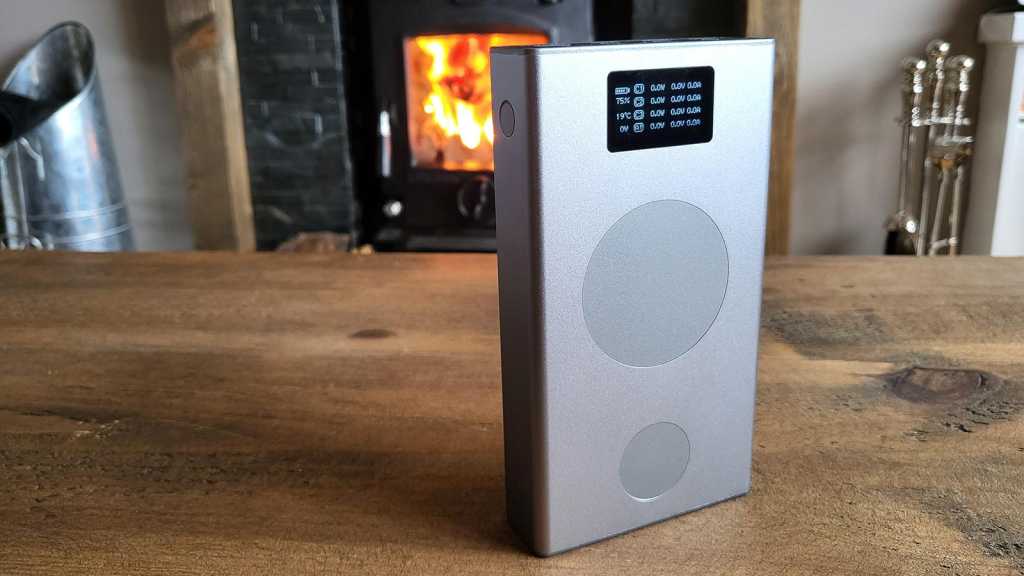 The fastest charging speeds and excellent functionality make this graphene-composite power bank one of the most capable we’ve ever tested – if you can afford it.

You can almost guarantee that any high-capacity power banks will be empty when you need it – they take forever to recharge, and typically you remember to do so too late for them to be of any use. This is a thing of the past with graphene-composite banks such as the Chargeasap Flash Pro Plus: able to charge at much lower temperatures than lithium-polymer, it can also charge significantly faster.

A similarly specced 25,000mAh lithium-polymer power bank could take anywhere between 3-4 hours and a full day to recharge, depending on its inputs and what adapter/cable setup you’re using. And it would likely cost somewhere between £20/$20 to £50/$50.

A drawback of that fancy tech inside is that it’s going to cost you more than the average lithium-polymer bank: Chargeasap Flash Pro Plus costs $319 (approx £235). At least shipping is free! 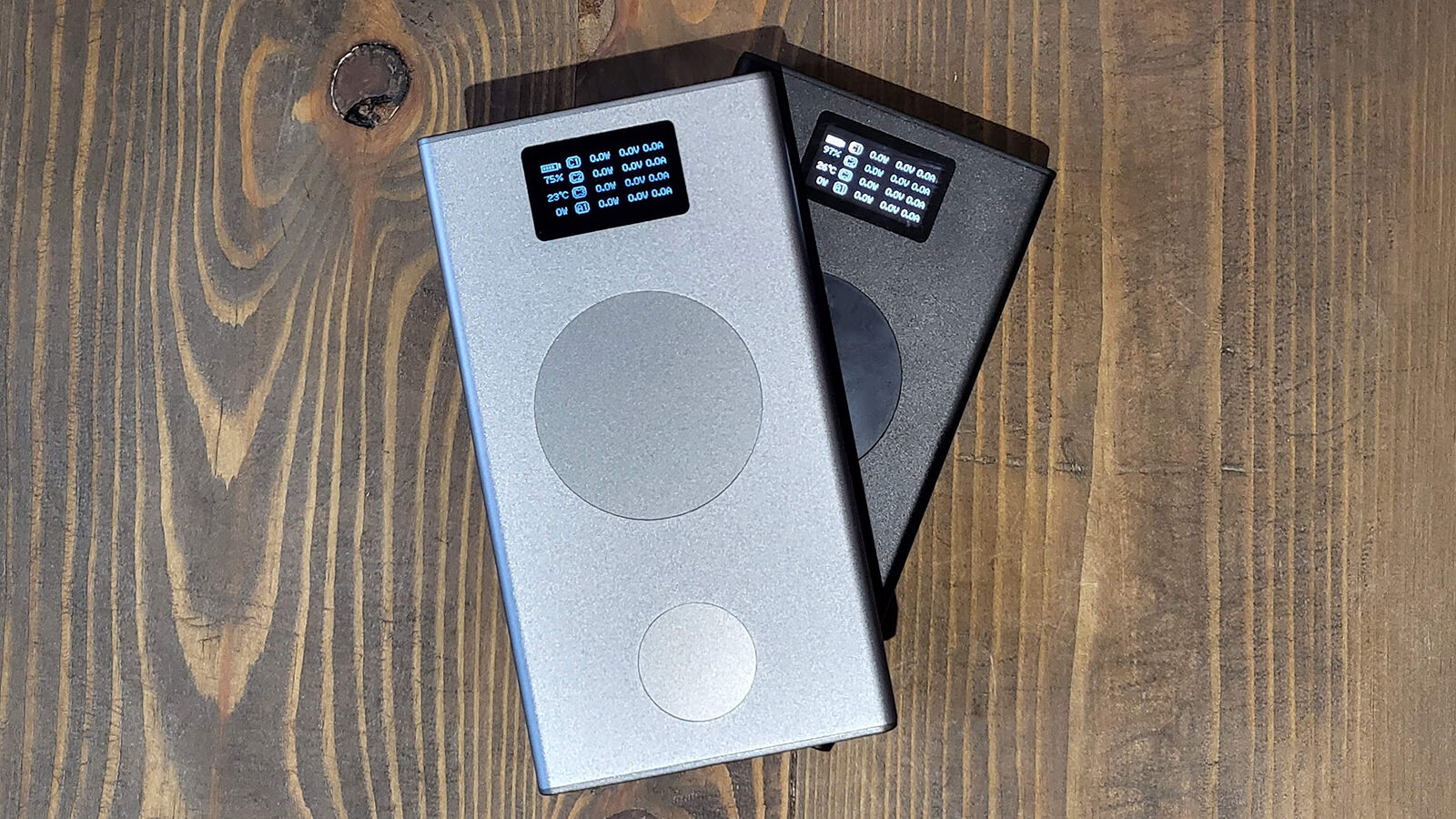 Inside the Flash Pro Plus are five lithium-polymer graphene-composite battery cells, designed by Tesla and Panasonic. These have a lifespan four times longer than standard lithium-polymer – rated for 2,000 cycles, they could still be good as new in five years or more.

When you’re charging at these crazy speeds, safety is a priority. A dual NTC thermistor monitors and controls the temperature in use, and there is full FC, CE, ROHS and MSDS certification and a two-year warranty. At 92.5Wh the Chargeasap Flash Pro Plus is safe to take onboard a flight in your hand luggage.

And there’s more on offer here than faster charging and longevity: Flash Pro Plus can charge six devices at once. It also has a handy 1.3in OLED display that provides real-time data on the remaining battery percentage, operating temperature, and input/output readings in Watts, Volts and Amps. Passthrough charging is also enabled, so the power bank can be charged at the same time as charging your other devices. 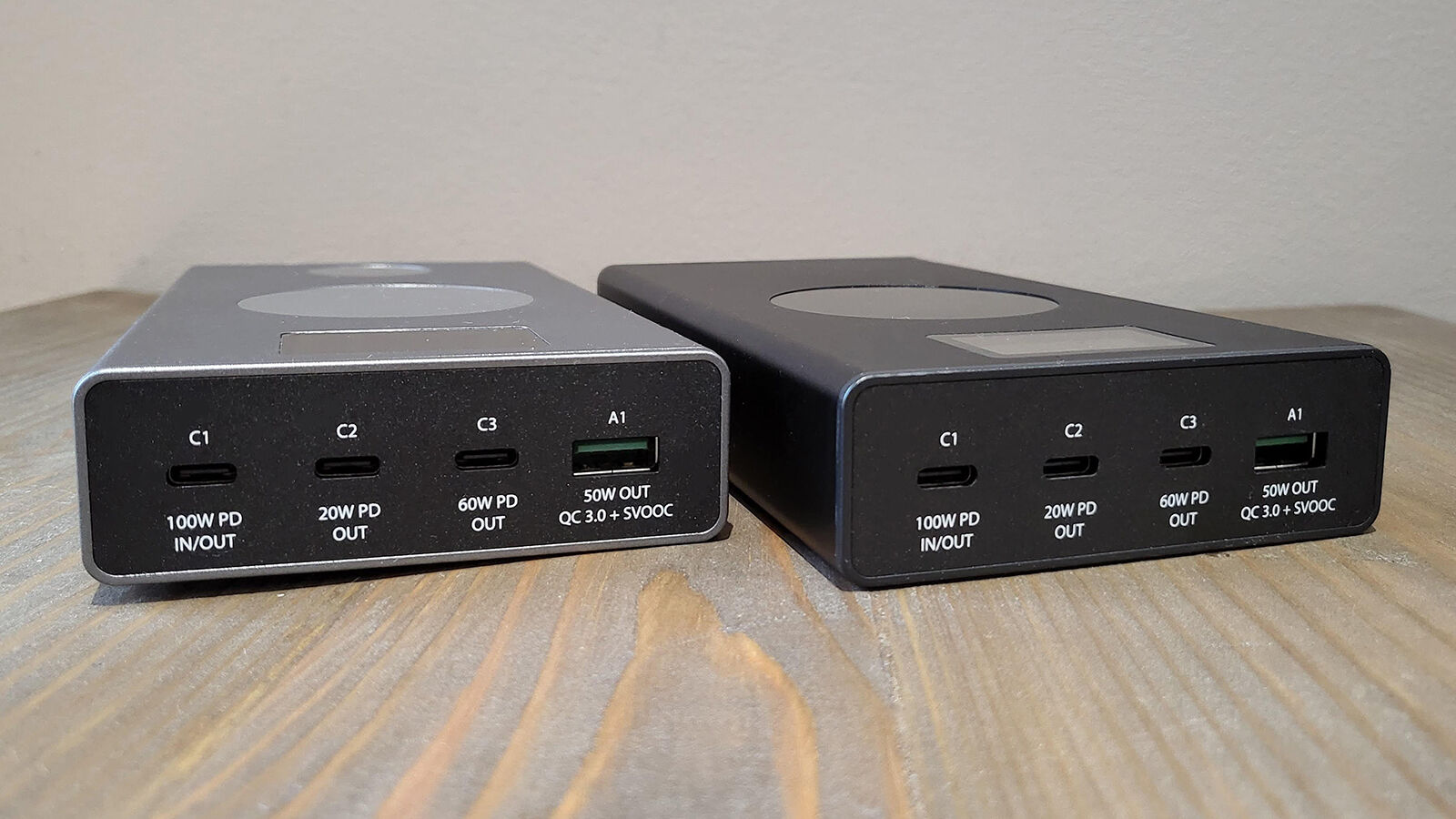 Chargeasap’s Flash Pro Plus (grey) is pictured above alongside its sibling, the Flash Pro (black). Designed for Apple users, it costs $20 more than the Android version.

In more good news, Flash Pro Plus is also able to support low-power devices such as your AirPods. 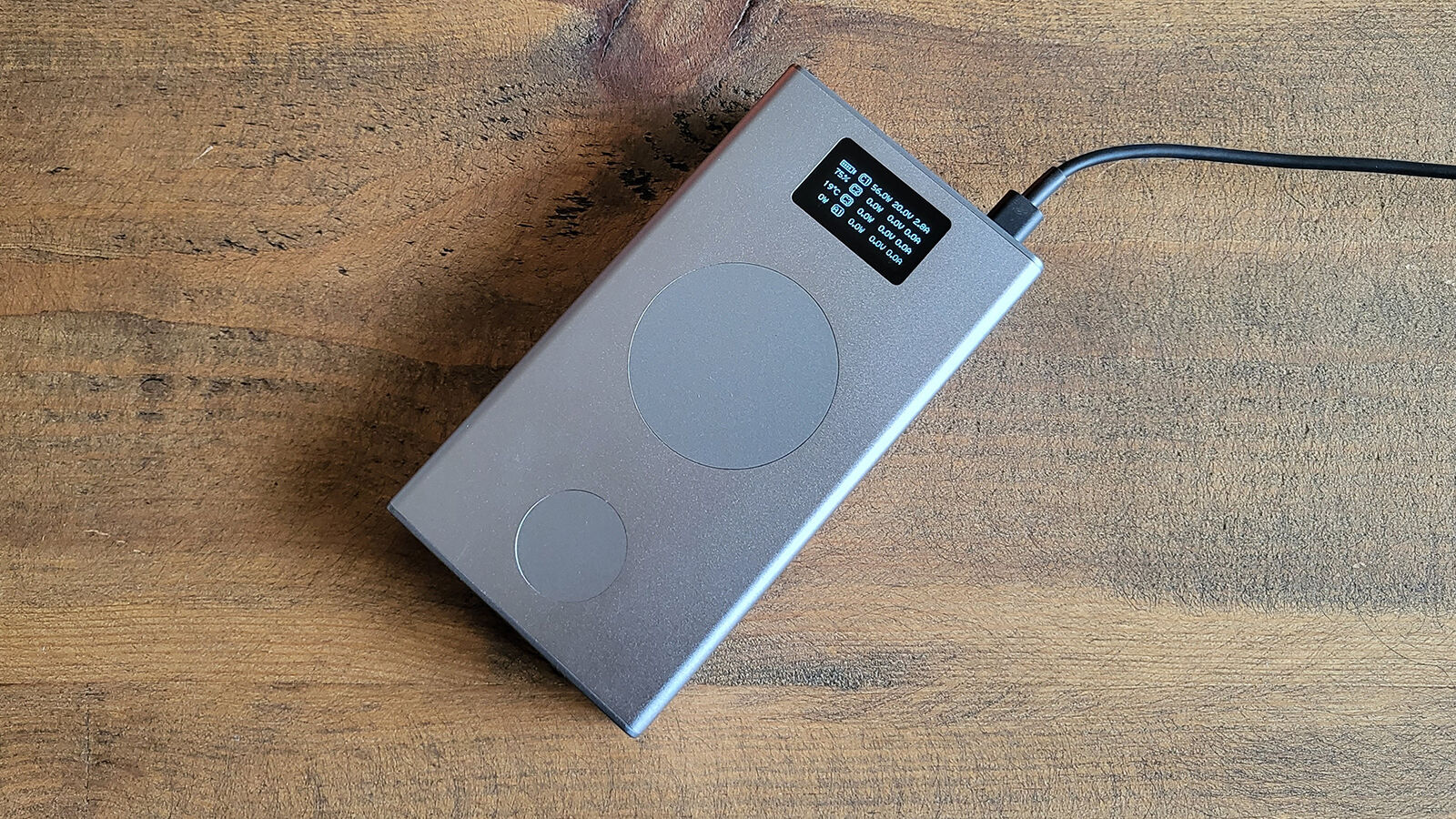 How efficient is Flash Pro Plus?

While graphene-composite banks charge much faster than standard lithium-polymer power banks, they are no more efficient. As is pretty standard, you can expect to get somewhere around 70% efficiency, give or take a few percent. With a 25,000mAh capacity, this means roughly 17,500mAh is available to your devices.

To work out how many times this would charge your device, just divide by the battery capacity of your own device. An iPhone 13 with a 2,438mAh battery would see 7.2 charges from the Flash Pro Plus.

Over time, energy stored within a power bank is lost. Chargeasap claims that over a period of 395 days, the average discharge rate is around 12mAh per day. Our testing period was not long enough to confirm this. 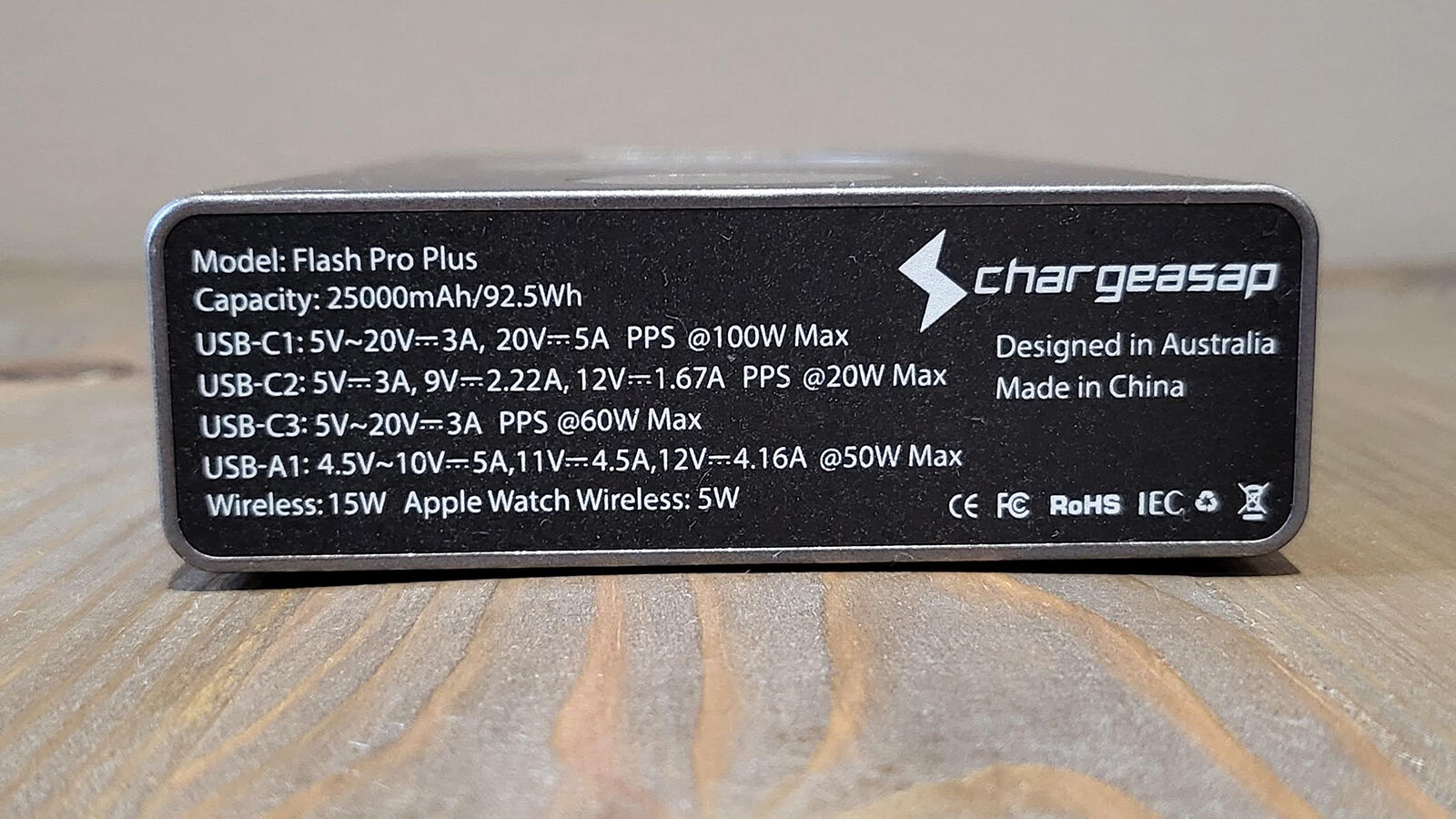 Performance and functionality is impressive, but we were less impressed with the design of the Flash Pro Plus. We noticed during our testing that it was quick to pick up greasy fingerprints and other grime, and we also found it particularly big and bulky.

While most power banks of this size weight between 350- and 400g, the Flash Pro Plus is a hefty 583.5g. And it’s not especially ‘pocket-sized’ at 158.5x87x28.5mm. In fact, it feels rather awkward in the hand, thanks to its blocky, rectangular design.

We like the grey aluminium housing, which is durable, helps to dissipate heat, and is an improvement on the standard matte black plastic of most power banks. We also like the inclusion of the OLED display. We are less keen on the matte black plastic end caps, and the specifications scrawled all over these in clear white type. A legal requirement, but it makes the bank look cheaper than it should, and some power bank makers do a better job of concealing this information.

It’s hard to dwell too long on our gripes with the design when we are presented with a high-capacity power bank that can be fully charged in just over an hour, especially when it also supports all our Apple devices, Apple Fast Charge and MagSafe.

This is truly one of the most capable power banks we’ve tested and, if you can afford it, a great buy for Apple users. While it might be pricey, it will last four times longer than a standard power bank.

Do remember to factor in the cost of a 100W mains adapter and compatible cable if you do not already have one.

Marie is Editor in Chief, managing and leading the consumer editorial team. When she's not devising content strategy and analysing data she is a regular contributor of reviews, tips and tricks.

Marie has been writing about tech for 15 years, our resident Xiaomi and Chinese tech expert and a follower of all upcoming phones. AKA Tech Advisor's Power Ranger, she is the go-to for charging tech.