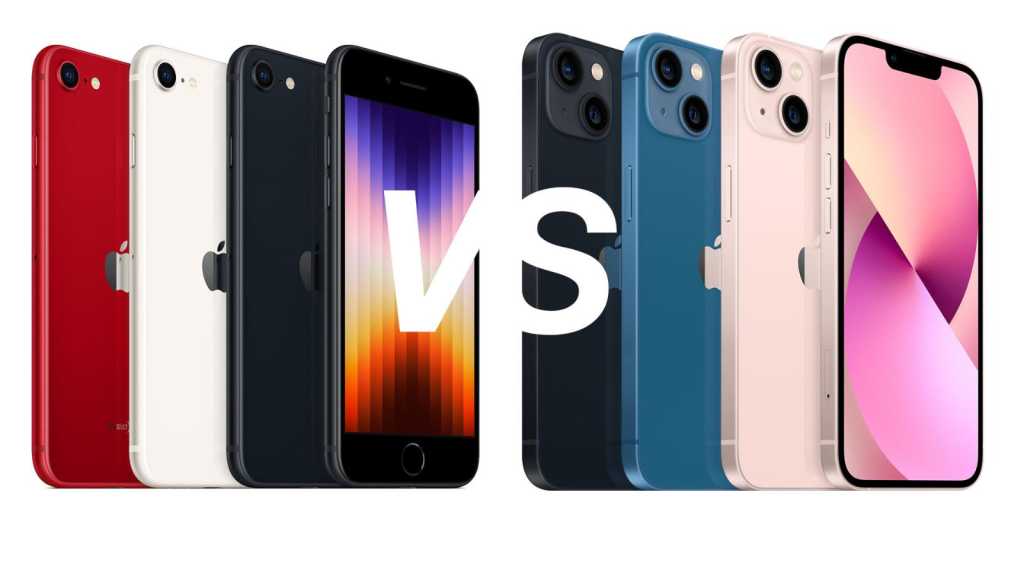 At just under half the price of the iPhone 13, the new SE is still a great bargain, especially with the hugely powerful A15 Bionic processor and 5G connectivity. It does feel like one revision too many though, with the design something of a curiosity these days. For a great deal, buy the SE, for a modern, premium device it’s the iPhone 13.

Apple recently introduced the latest version of its popular iPhone SE series, with a few improvements over the model it replaces. But, with an ageing design and limited feature-set compared to other models in 2022, does it have the old magic that made the 2020 device such a success? We look at how the 2022 iPhone SE compares to the iPhone 13, so you can make the right decision about which one to buy.

There’s little to differentiate the iPhone SE (2022) from the iPhone SE (2022) or the iPhone 8, or even the iPhone 6. Apple has given the form factor one last hurrah (we hope) as it enters the eighth year of service. While the aesthetics are from 2014, there have been some refinements over the years. There’s no headphone jack, as that disappeared with the iPhone 7, and the rear panel is glass rather than metal, but for the most part it’s the same 4.7in display framed by large top and bottom bezels, the latter of which is the location of the Home button with Touch ID.

Apple does claim that the glass on the front and rear is the “toughest glass in a smartphone”, although we’re pretty sure it isn’t quite as premium as the Ceramic Shield employed on the iPhone 13. The SE does feature an IP67 water and dust proof rating, so any spillages or quick dunks won’t destroy the device.

There’s no Face ID on the iPhone SE – it still features Touch ID on the Home button, so there’s no notch on the LCD display, but the top bezel does house the same 7MP FaceTime HD camera that came on the iPhone SE (2020) and iPhone 8. It’s a similar story on the back, with a single 12MP Wide camera that feels a bit limited when compared to even some of the most affordable Android phones in 2022.

The iPhone 13 is a more modern affair. The design is the same as the iPhone 12, so there’s squared off edges reminiscent of the iPhone 4 and 5 era, and the display is a more spacious 6.1in Liquid Retina OLED panel. Considering the difference in screen size, the dimensions of the two devices are more similar than you might expect.

Of course, if you want the smallest and lightest iPhone in the currency catalogue, there’s the iPhone 13 mini which measures a tiny 131.5mm x 64.2mm x 7.65mm,  weighs 140g, and is pretty much identical to the larger iPhone 13 except for its 5.4in Liquid Retina OLED display. 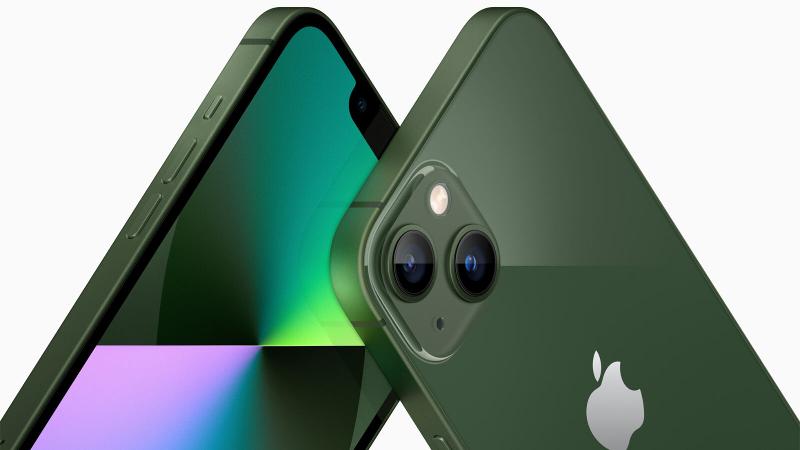 Both the iPhone 13 models feature Face ID, along with the requisite notch in the display to accommodate the cameras, so if you’re not keen on that design, then the iPhone SE might be a better choice. On the rear there are two cameras (12Mp Wide + 12Mp Ultrawide) opening up more features and photographic capabilities than on the less expensive SE.

They are both instantly recognisable as iPhones, but the SE is something of a vintage flavour these days, which we’re not saying is a bad thing, as it’s inexpensive, lightweight and very, very familiar. Plus it has a Home button, which for some people is essential.

Here’s a more detailed look at how these two iPhones compare in terms of the features and capabilities on offer.

Surprisingly, Apple has given its flagship A-series chip to both devices. So, you’ll find an A15 Bionic is the brains, no matter which one you choose. Performance-wise, the A15 Bionic is a bit of a beast. It’s the exact same processor that powers the iPhone 13 Pro Max, so if it’s good enough for the Pros then it’s easily a match for anything regular consumers will require.

As is standard with iPhones, you can select from different storage capacities when making your purchase. There’s no way to expand this further through microSD cards, so be sure to think about how much space you’ll need across the lifetime of your device.

As you can see, the cheapest iPhone SE comes with 64GB while it’s 128GB for the iPhone 13. In our opinion, 64GB is a bit tight these days, especially if you want to record video at 4K or store loads of music or other media on your device. Therefore, you should be careful about the model you choose, as managing storage can be quite a pain. To get more perspective, take a look at our article about why you shouldn’t buy the 64GB iPhone SE.

One of the main differences between these two iPhones is the size and quality of the display. The 4.7in Retina LCD panel in the iPhone SE is fine and has lasted the test of time, but in 2022 it may be a bit cramped for some, especially when the iPhone 13 mini exists for those who want a smaller handset. In an age of Full HD+ AMOLED panels on cheap Android phones, the LCD sub-Full HD display does feel a little tired with its 1334 x 750 resolution, 326ppi and 625 nits maximum brightness.  But, on the eyes it’s still a bright, colourful panel that many people will enjoy. 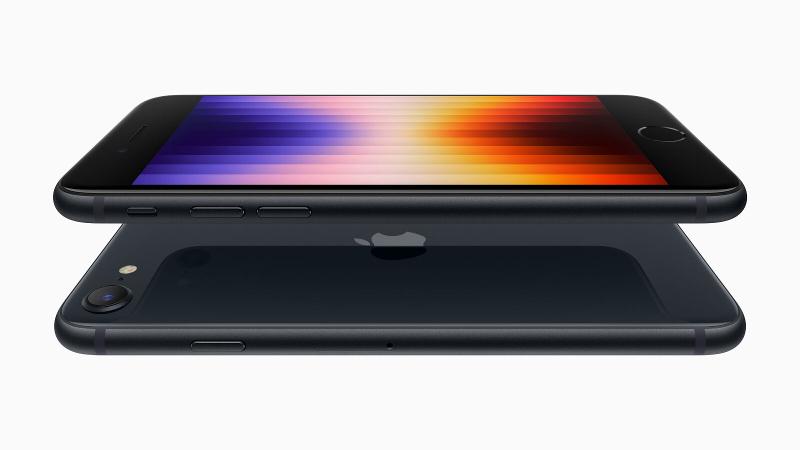 With the iPhone 13, Apple uses a much better 6.1in OLED panel that has greater contrast, colour, brightness and is of course bigger. The resolution of 2532 x 1170 and 460ppi means it produces a sharper image, while the 2,000,000:1 contrast ratio knocks the SE’s 1400:1 into a cocked hat. Add HDR and the 800 nits of typical max brightness and it’s obvious which is the winner. As we said, the SE display is fine, but the iPhone 13 one is definitely the superior surface.

Again, the offering in the iPhone SE (2022) is simple and very usable. The A15 Bionic processor brings some new modes to the 12Mp f/1.8 main camera, including Deep Fusion and Photographic styles, so if you’re thinking of moving from an iPhone SE (2020), then there are some additional toys to play with. Video tops out at 4K/60fps (as does the iPhone 13) which is great, although remember what we said about storage.

With the iPhone 13 boasting twin 12Mp cameras (f/1.6 Wide and f/2.4 Ultra Wide) it obviously has more features available, not least of which is a 2x optical zoom rather than the 5x digital one on the SE. There’s Sensor-shift optical image stabilisation which actually moves the sensor to ensure smooth footage, plus the all-important Night Mode that allows you to capture great images when the light gets dim.

Many thought that the inclusion of the A15 Bionic in the SE would mean it would get Night Mode, as it seems to be mainly software based, but that didn’t happen so the iPhone 13 is the only one with this very useful feature. It’s the same with Cinematic mode, which allows a shallow depth of field, so you can focus on things in the foreground and then pull focus to something in the background (or vice versa), giving you the chance to create genuinely movie-like footage. 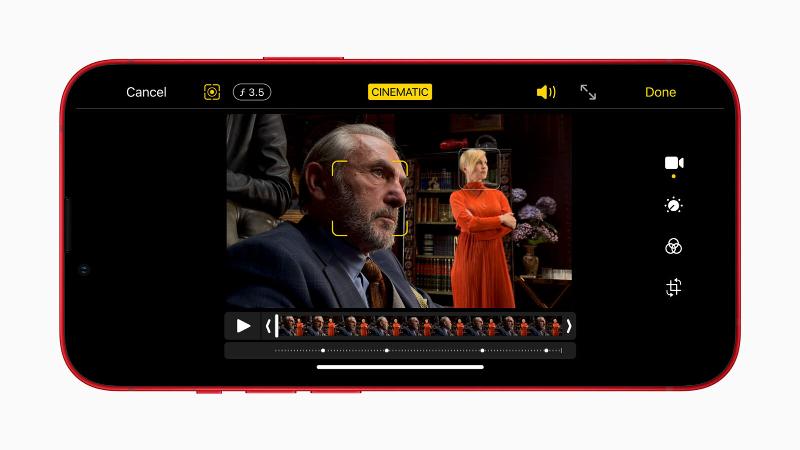 On the selfie side of town, the iPhone 13 uses the Face ID TrueDepth camera, which has a f/2.2 aperture and 12Mp sensor. This allows the Cinematic and Night modes, plus the usual 4K/60fps recording and support for various photographic and portrait modes.

The FaceTime HD camera in the SE does offer photographic and portrait styles too, with the video maxing out at 1080/30fps. It’s a very serviceable, if basic, camera that will be more than fine for general social media posts, but if video is something you care about, the iPhone 13 is the one to consider.

There isn’t a huge amount of difference in terms of connectivity, as both device come with support for 5G networks. The iPhone 13 does have double the MIMO capacity of the iPhone SE, so transfer speeds will be faster on the former, but both should be pretty quick. Wi-Fi 6 is also standard across the range, as is Bluetooth 5, NFC and GPS and the physical Lightning connector port.

Here’s a breakdown of the technical specs for both devices:

You can buy either device from Apple, most tech retailers or on contract from your mobile provider. Here’s the official pricing for the various configurations:

If you prefer the smaller version of the latest iPhone, here’s how the iPhone 13 mini is priced:

Our advice is to skip the 64GB version of the iPhone SE 3, so what you have to compare is the 128GB models, which means the pricing is follows:

Here’s the best prices you can get for the 128GB iPhone:

To see is you can get any of these models a little cheaper, be sure to check out our best iPhone deals roundup.

If you’re looking for an inexpensive iPhone that can take decent pictures and videos, runs that latest version of iOS and continue to do so for several years, then the iPhone SE (2022) ticks all of those boxes. The ageing design isn’t great and the features lag behind the iPhone 13, but it’s a relatively cheap and cheerful device.

Those who want a more future-proof iPhone, should look to the 13. The better display, cameras and faster connectivity make it a thoroughbred next to the workhorse SE. That being said, both models feature the A15 Bionic processor, so you’ll have a fast device whichever way you go.