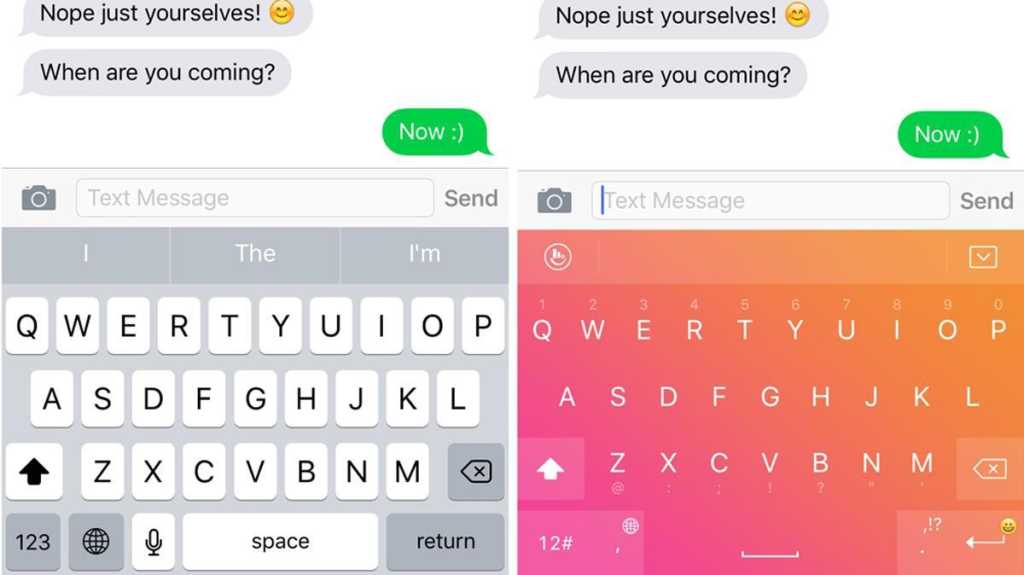 Back in 2014, as part of the iOS 8 software update, Apple gave iPhone owners two related benefits: a greatly improved standard system keyboard featuring QuickType, and the ability to install keyboard apps from other developers.

Most of the third-party keyboard apps use predictive text and autocorrect features that are similar to those used by Apple’s keyboard, but the best ones can be more accurate than Apple’s and can help to speed up your typing quite significantly, as well as eliminating embarrassing typing gaffes.

Some of these keyboards also introduce entirely new features, such as swiping across the keyboard rather than tapping on individual letters. And the ones we recommend in this article are all free, so why not take a look and see if they can help you type more quickly and accurately?

Free with every iOS device

The standard iOS keyboard was once pretty basic, and its auto-correct feature unreliable. Until 2014 Apple had always imposed a blanket restriction on apps that duplicate core features of iOS itself – such as the built-in keyboard – so its decision to allow iOS to use third-party (non-Apple) keyboard apps was a pretty big step forward.

However, Apple also made improvements to its own keyboard by introducing a feature that it calls QuickType. QuickType attempts to predict what you’ll type next by offering three different words that you can choose from.

It’s designed to understand the context of what you’re typing, too, so it will suggest more formal or more casual language depending on whether you’re sending an email to your boss or a text message to a friend. It can also learn your writing style as you use it, and will remember if you like to use particular words or phrases when you’re writing.

Apple has since added further improvements to its keyboard, including a built-in Shortcut Bar for iPad with quick access to bold, italic, underline, copy and paste. The only downside for some was that it changed the design to default to lower-case letters, but here’s how to change it back to all caps.

You can also activate a new one-handed keyboard for typing on the go on the bigger screens of Apple’s modern iPhones. 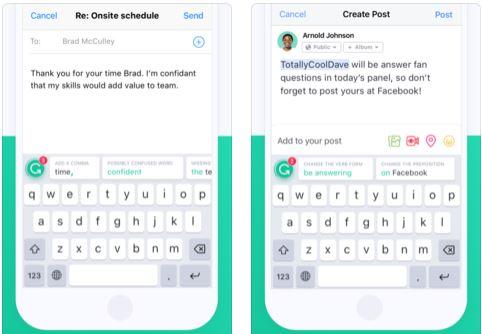 Grammarly’s keyboard is also an editor, but unlike a general auto-correct it offers constructive guidance to strengthen your writing style. Some of the useful features include contextual spellchecking, punctuation correction and vocabulary enhancement.

This keyboard app is especially useful if you’re sending business or professional emails, and sees to it that what you write is clear, communicative and correct. Plus, it’s free. 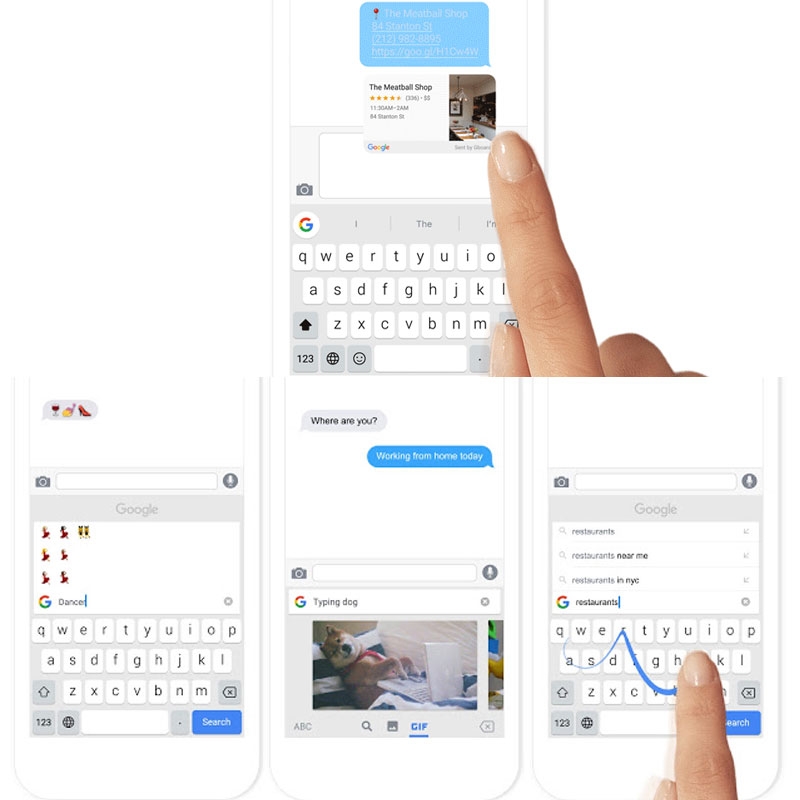 Google has created its own iOS keyboard, dubbed Gboard. Gboard allows users to quickly perform a Google search from within the keyboard itself, no matter what app you’re using. The search results can then be quickly shared with whomever you’re talking to.

It’s not just standard Google results, though – you can search for GIFs, emojis, addresses, phone numbers and more. You can even draw or record your own GIFs within the keyboard itself.

It’s displayed in true Google fashion using cards, and all you need to do is tap the card to send it to the recipient. It also features ‘Glide Typing’ like Swype (which is now discontinued on iOS), allowing users to slide their fingers from one key to another instead of tapping them, which speeds up the typing process.

Google has added 3D Touch functionalities to its keyboard, too. 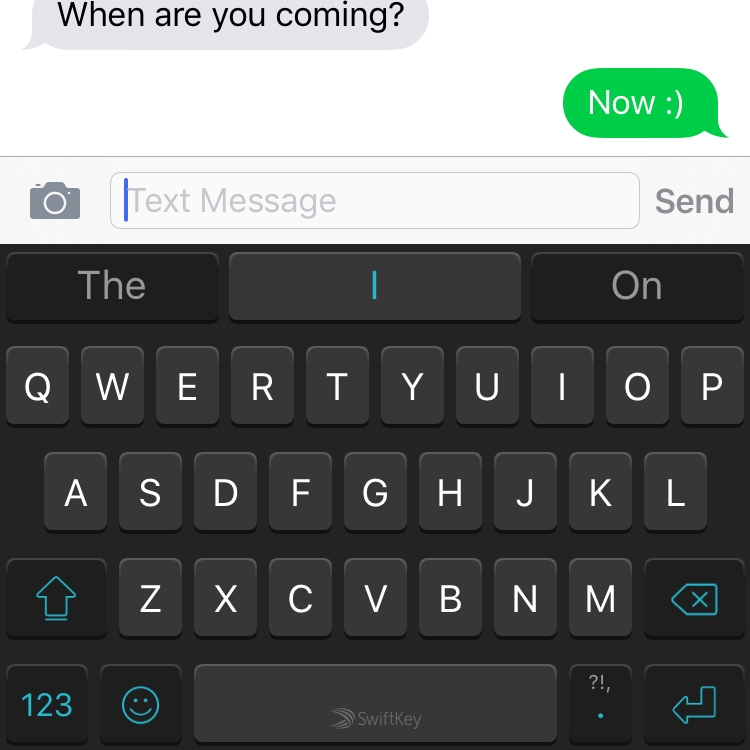 It’s probably fair to say that the current default iOS keyboard takes its lead from SwiftKey, with a suggestion bar that sits at the top of the keyboard and displays three words that you can quickly type in full with a quick tap of your finger.

That similarity between the two keyboards means SwiftKey isn’t an essential app for iOS users, although quite a few people share my preference for its darker colour scheme, which helps to make the suggestion bar stand out a bit more, and there are various other colours and themes to choose from (although some will cost you).

However, SwiftKey still stands out from the basic iOS keyboard as it also offers a ‘flow’ option that allows you to type by sliding your finger across the keyboard rather than lifting your finger to tap each letter separately. Some people really like this approach – although it can take a bit of getting used to – and the app is free, so there’s no harm in downloading it and trying it out for a while. 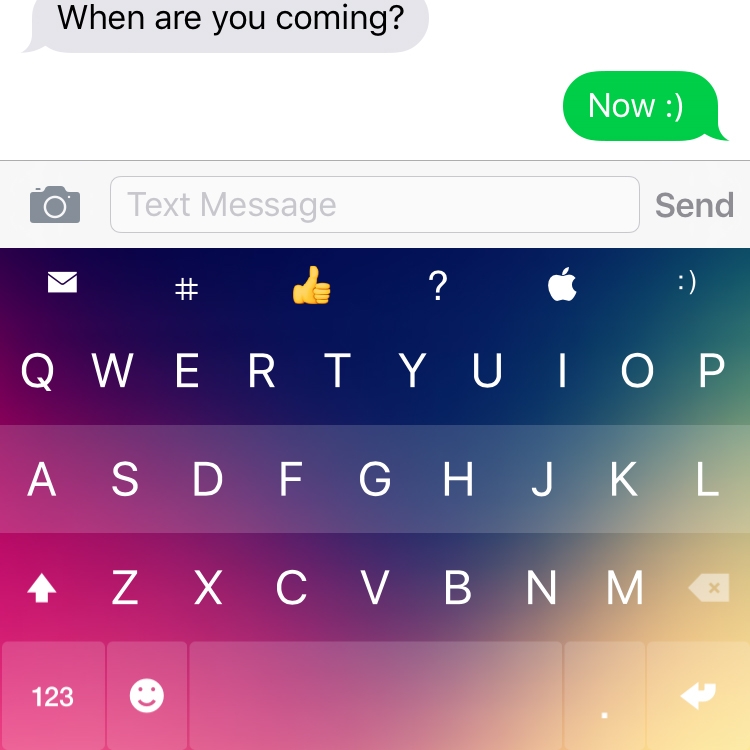 Fleksy may not have a suggestions bar like the iOS keyboard and other rivals, but it does offer lots of customisation and extensions that we think you’ll find useful. It offers lots of colourful keyboard themes and sizes, and even offers extensions for GIFs, stickers, emoji and more. It also supports gestures that help make typing much quicker than usual.

It does take a bit of getting used to, as its predictive engine works when you press the Space bar rather than while you’re typing a word, but it is almost always successful so once you learn to trust it you’ll be tapping away at high speed, confident that Fleksy will clean up any mistakes.

You can also hide the Space bar and increase the size of the keyboard to make typing even easier, and then just swipe your finger to the right to add a space, or swipe twice to add other punctuation marks. 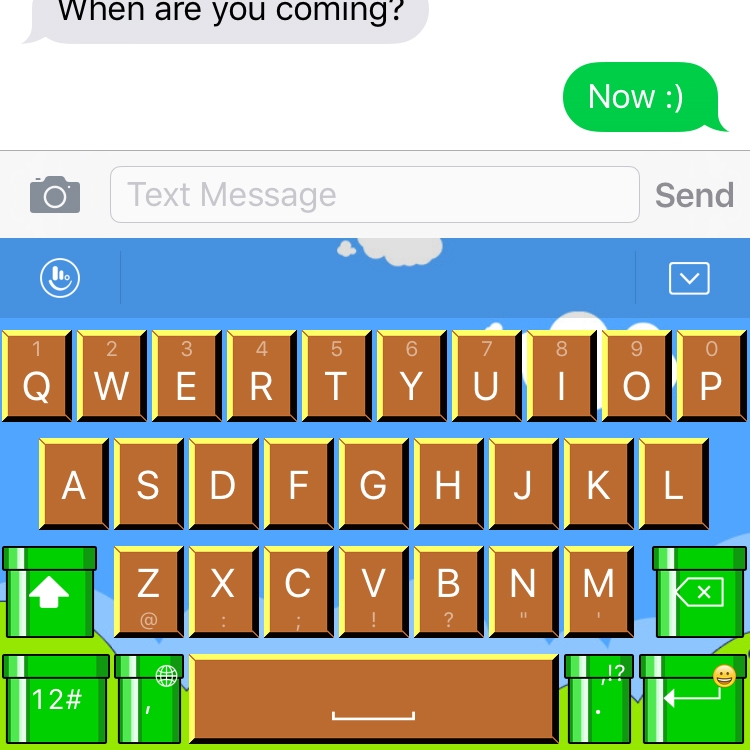 TouchPal works like a conventional keyboard, allowing you to tap each letter individually, but as you get used to it you can switch into ‘slide’ mode and type words by sliding your finger across several letters in a single smooth motion. We found that its autocorrect feature was very efficient, although it didn’t strike us as being obviously superior to rival keyboard apps.

Where TouchPal really stands out is in the design: there are loads of different colour schemes and themes that you can apply to the keyboard including this crazy game one.

There’s also an option to take a picture using the camera, or to import an existing photo, and then use your photos to create a custom design for your own keyboard.