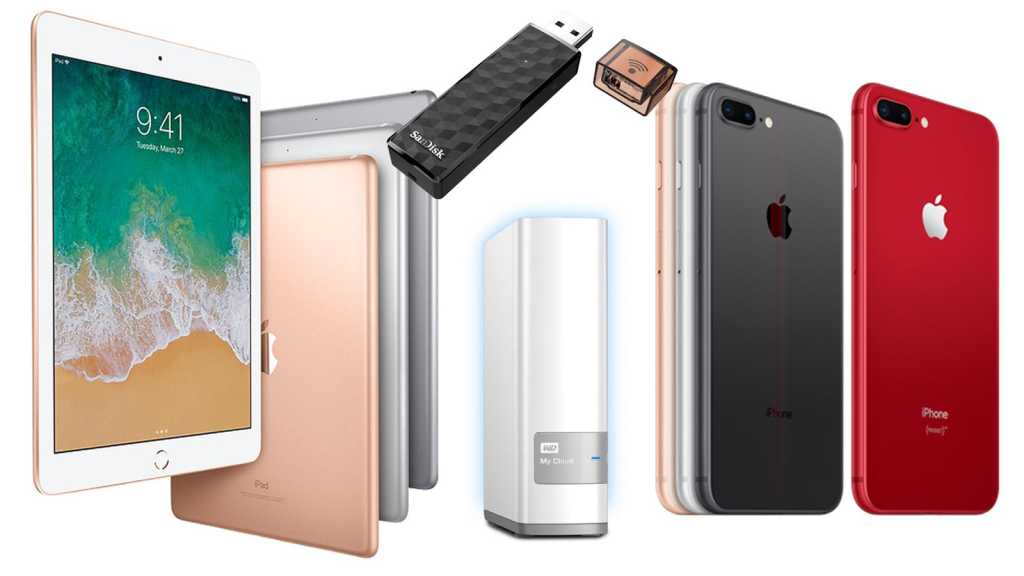 Running out of storage space is often an issue for iPhone and iPad owners. But there’s more you can do to fix it beyond  freeing up some space by deleting rarely used apps, moving files to the cloud and generally optimising the way storage is handled.

If you bought a device with a low capacity the problem is likely to recur, because you can’t upgrade an iPhone or iPad to have more storage: a 32GB iPhone will be a 32GB iPhone forever.

But wait a second before you rush off to buy a new phone. You might not be able to upgrade an iDevice’s internal storage specs, but you can add more storage with external accessories. And there’s plenty of them out there.

Read on for our guide to the best external storage devices for iPad and iPhone. Also read our tips on  how to increase iPhone storage. For similar products compatible with Macs, see Best external Mac hard drives. Finally, here’s how to back up an iPhone to an external hard drive. 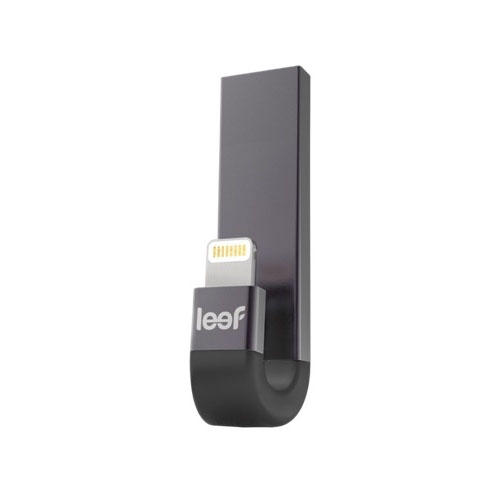 The original Leef iBridge was one of the first dual-interface devices that included both USB and Lightning interfaces so that you could easily transfer files between Macs, PCs and iOS devices.

It’s been updated since then, with the Leef iBridge 3 the latest addition to the family. It features USB 3.1 and Touch ID protection too, providing speedy, secure transfers.

It also boasts a 256GB option – which is as much as many of the MacBook laptops these days, and more than most of its memory stick rivals.

Using the iBridge 3 app, you can access all your photos, movies and music (apart from DRM-protected files) without taking up any storage on your iOS device.

With the iBridge Camera, a feature built into the iBridge app, you can take photos and directly save them to the storage device.

If you want to clear space by transferring photos from your iOS device, that’s also available via the app – you can then copy/move these by plugging the iBridge into your Mac or PC.

The iBridge 3 weighs just 12g, so it’s easy to carry around in your pocket, and the silicon and aluminium case can cope with being banged about in a backpack when you’re travelling.

It’s compatible with the iPhone 5 or later, the iPod Touch (fifth generation) and the iPad 3 or later 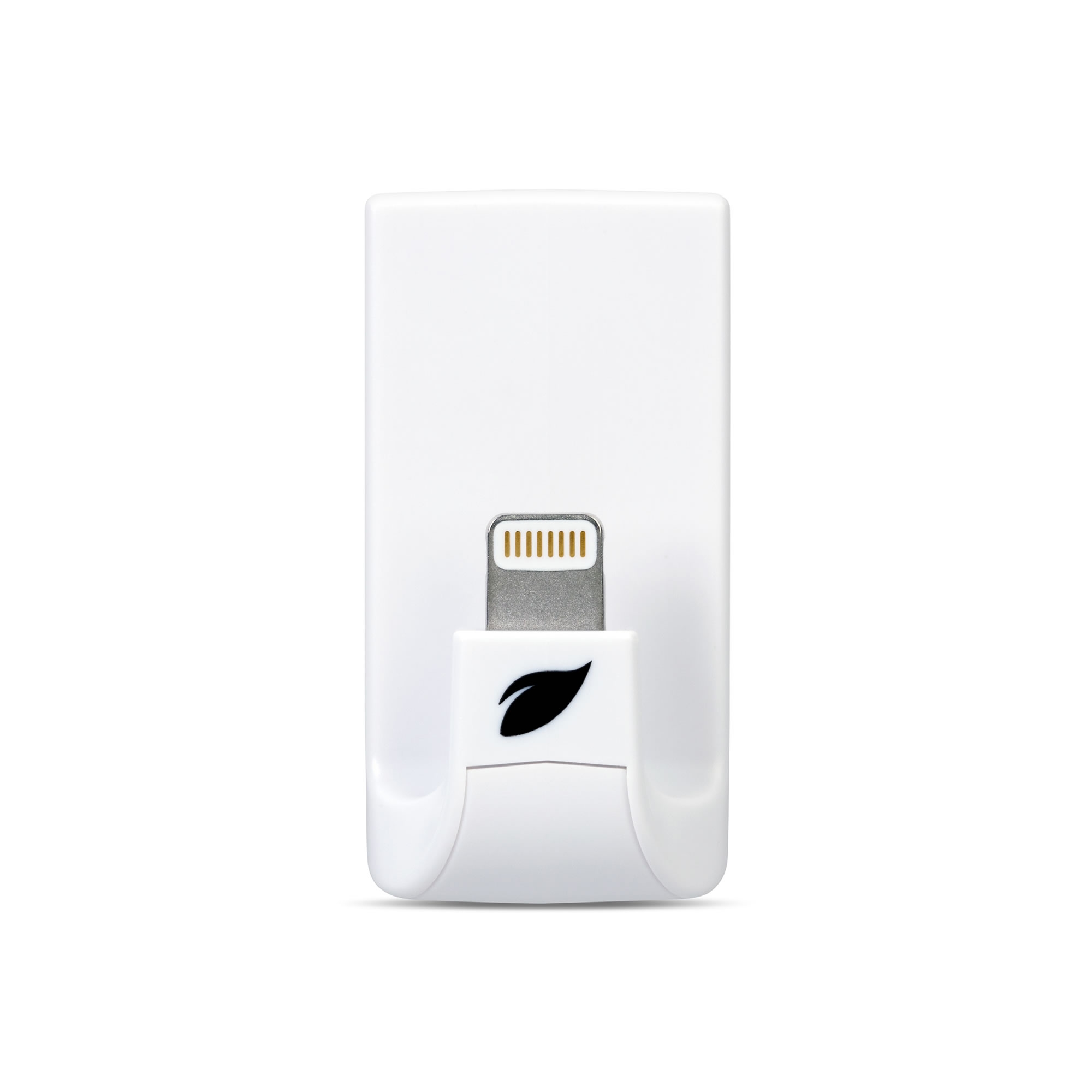 As well as the dual-interface iBridge, Leef offers another storage option for your iOS devices. The iAccess looks very similar to the iBridge, but instead of having its own built-in Flash memory it allows you to insert an SD memory card for storing your files.

It was primarily designed so that you could transfer photos and videos from an action-cam or drone on to your iPhone or iPad, but the transfer process works both ways so you can just as easily copy files from your iOS devices onto a memory card for safe-keeping.

The other advantage of the iAccess is that you can just keep adding memory cards to give you all the extra storage you need. 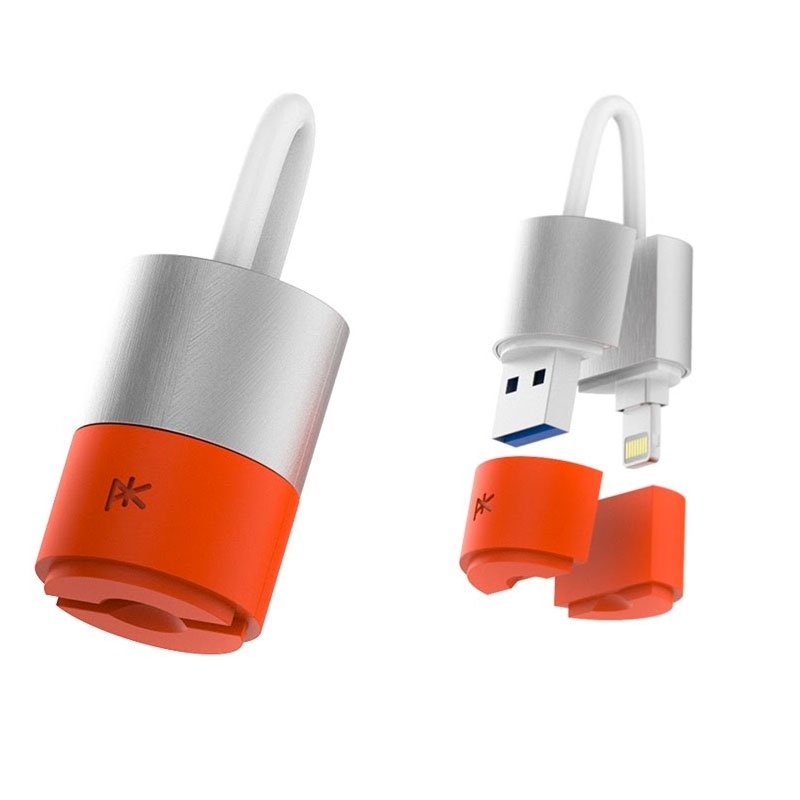 K’ablekey is the product of Paris-based company PKparis, and offers a slightly different design to others mentioned in this roundup.

The K’ablekey features a brushed aluminium look with built-in magnets that keep the two semi-circle halves stuck together for easy transportation. When you want to use the cable, simply pull off the orange rubber ends and pull the two sections apart.

When you want to use the cable, simply pull off the orange rubber ends and pull the two sections apart.

The K’ablekey offers three functions: the ability to store and access media on your iOS device, easy transfer of files from PC/Mac to iOS and charging capabilities when plugged in to a charger/computer/powerbank.

It’s ideal for those with low storage as the iOS app offers the ability to not only copy but move all your photos and videos to K’ablekey, freeing up much-needed storage and making your entire library accessible via USB storage.

It also provides a simpler way to watch movies on your iPhone or iPad: it’s easier to transfer a movie to the USB and watch it in the Pk Memory app, rather than converting and uploading it via iTunes.

Our only issue is with the Pk Memory app itself: it’s poorly designed and fairly confusing to use as it relies heavily on icons that aren’t always self-explanatory.

It’s easy enough to transfer your entire media library to/from the storage device, but other aspects are a little more confusing. Oh, and there’s no way to tell how much storage is used/left in the app – an important feature if you opt for the lower storage option. 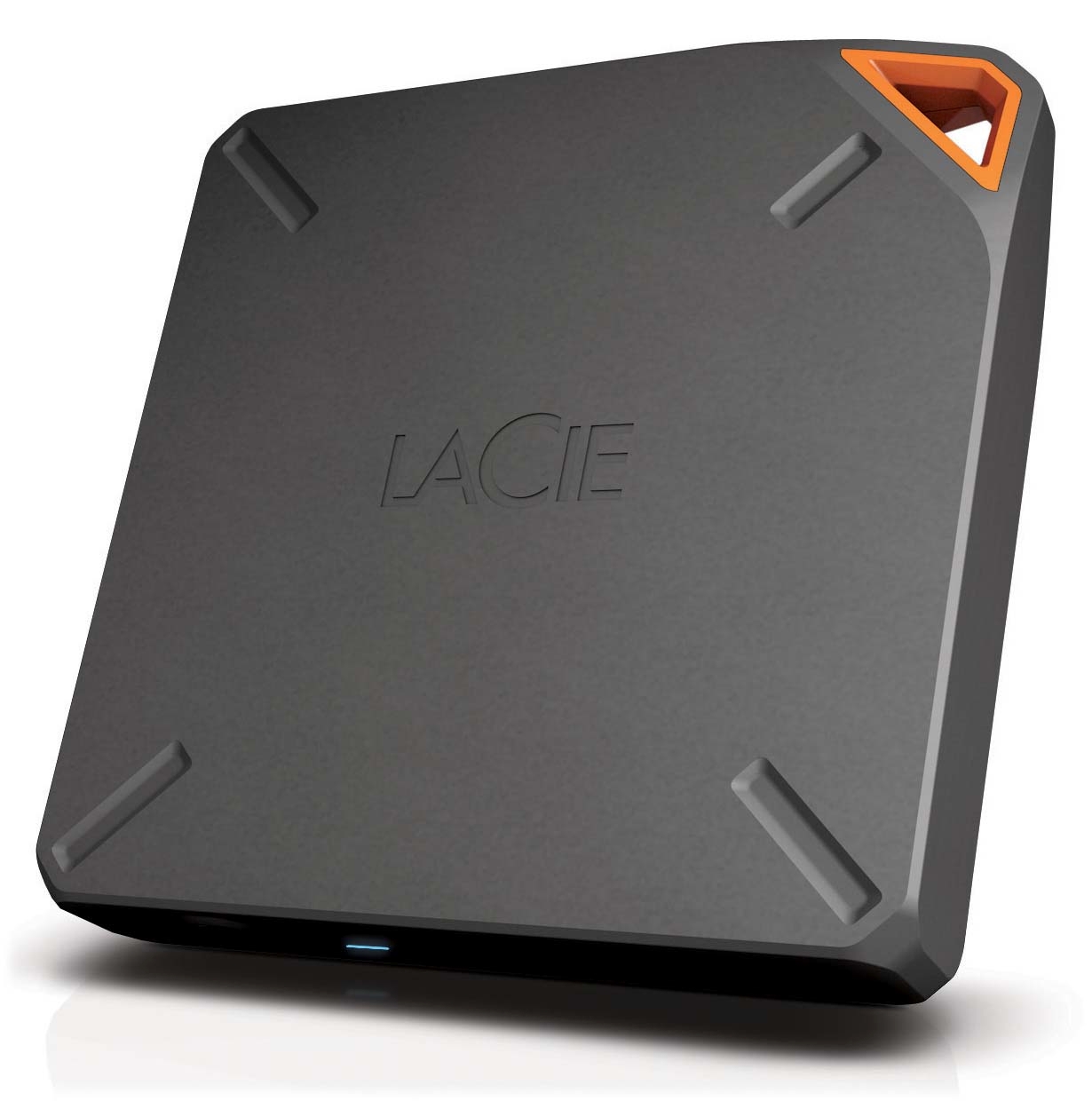 The Fuel has a USB 3.0 port that allows it to be used as a conventional hard drive with a Mac or PC. However, it also has built-in Wi-Fi, which will allow you to transfer files to or from an iPhone or iPad when you need to.

LaCie says the battery is good for up to 10 hours. 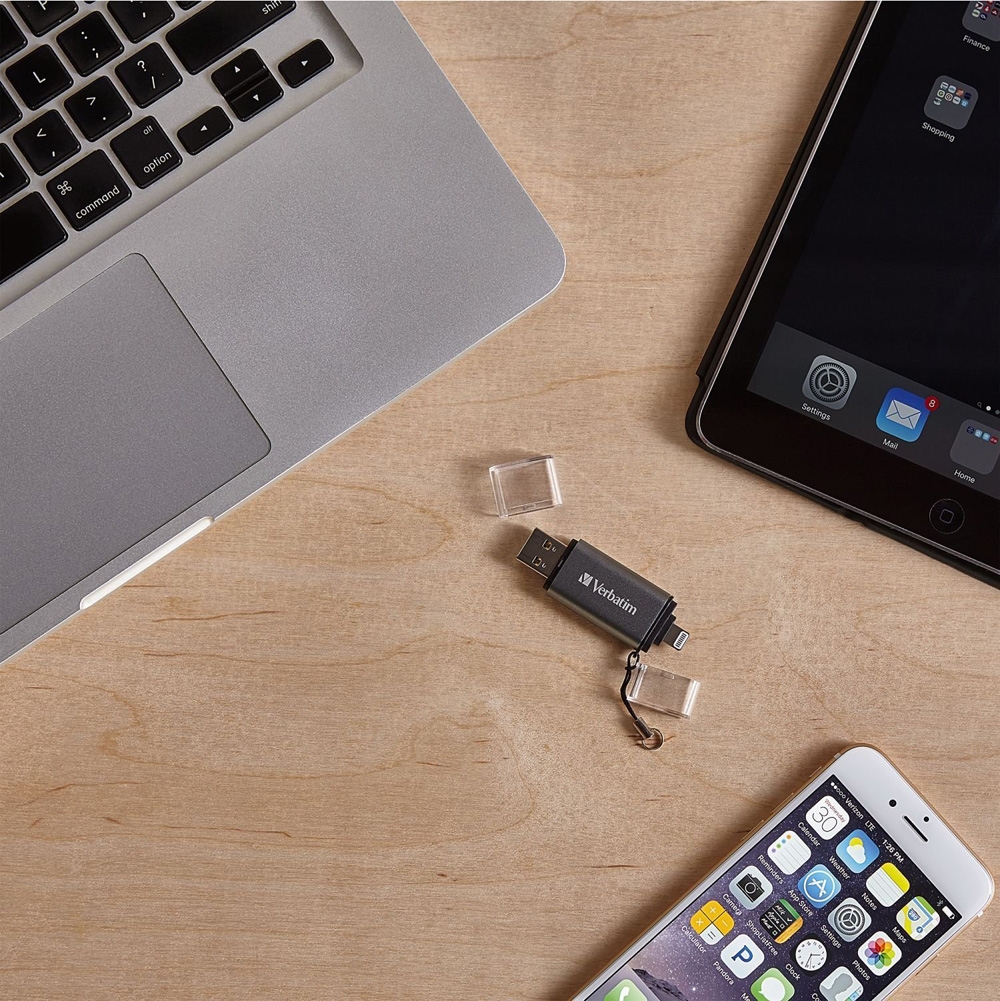 In common with the other USB flash drive-type accessories in this round-up, the Verbatim Store ‘n’ Go is a flash memory stick with a full-size USB port at one end and a Lightning port at the other, but this is a fast USB 3.0 port that’s backward-compatible with USB 2.0.

This makes it easy to share, copy or move files between Macs, PCs, laptops and iDevices, or use the stick itself to back up content on your iDevice or play back media stored on the Verbatim on your iPhone or iPad. The Verbatim’s connection is a fast USB 3.0 port, which is backward-compatible with USB 2.0.

We like the small, compact design of this USB/Lightning stick, but only one of the two clear plastic end caps are tethered so the other could easily become lost. A lanyard allows you to connect the Verbatim to a keychain.

You’ll be prompted to download a free companion app from the App Store the first time you connect the Verbatim to your iPhone or iPad, and can then use this to play media stored on the stick, back up content or save camera photos directly to it.

The Verbatim Store ‘n’ Go is compatible with iPhones and iPads running iOS 7.0 or later, Mac OS X 10.4 or later, and Windows XP or later. It’s available in 16GB, 32GB and 64GB capacities. 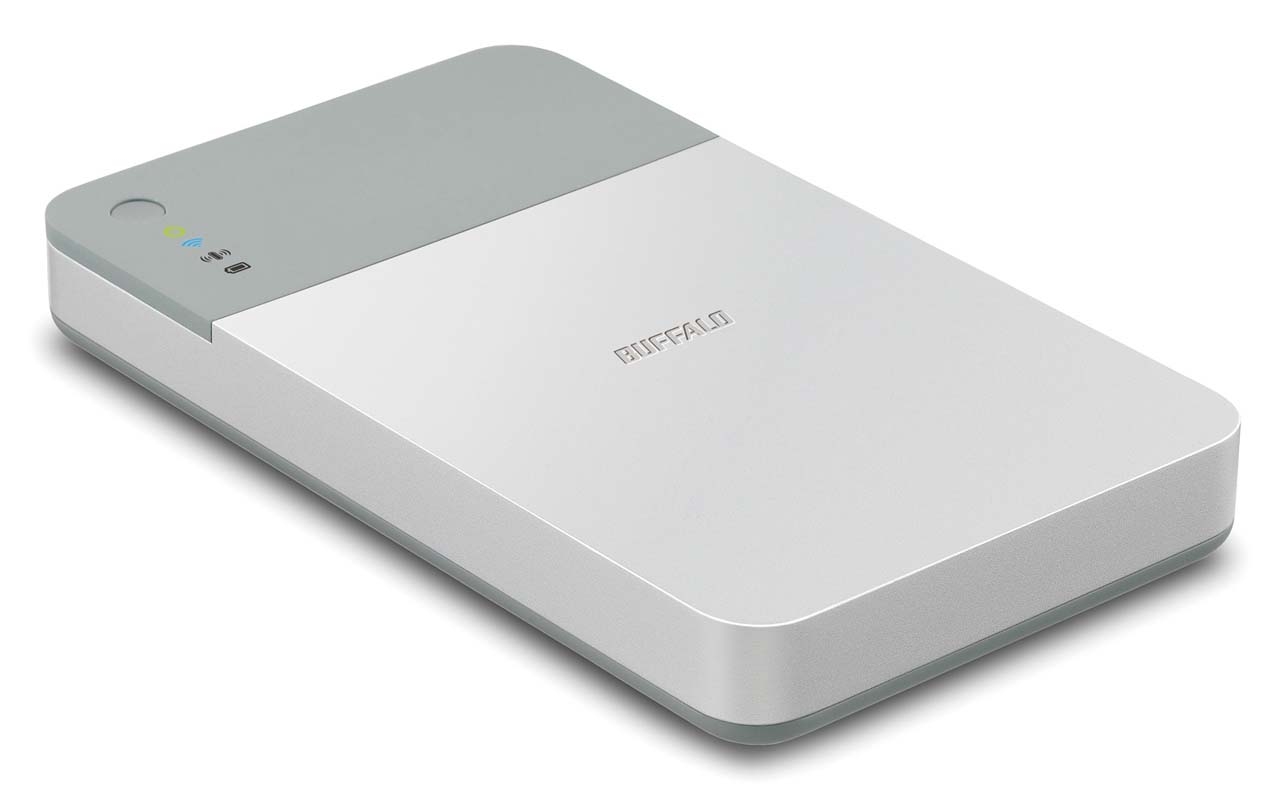 The MiniStation Air 2 improves on its predecessor in a number of ways. The Air 2 not easy to find the US, but the original Ministation Air can be found on Newegg for $239.99.

The Air 2 is slimmer and lighter than the original model, and now offers up to 1TB of hard disk storage.

The battery life on this model is a lot better too, lasting for 10-12 hours when using wifi, and it’s even powerful enough to top up the battery on your iPhone as well.

There’s also a high-speed USB 3.0 port so that you can use it like an ordinary hard disk with your Mac or PC if you need to. It’s a shame, though, that there’s no SD card slot as well. 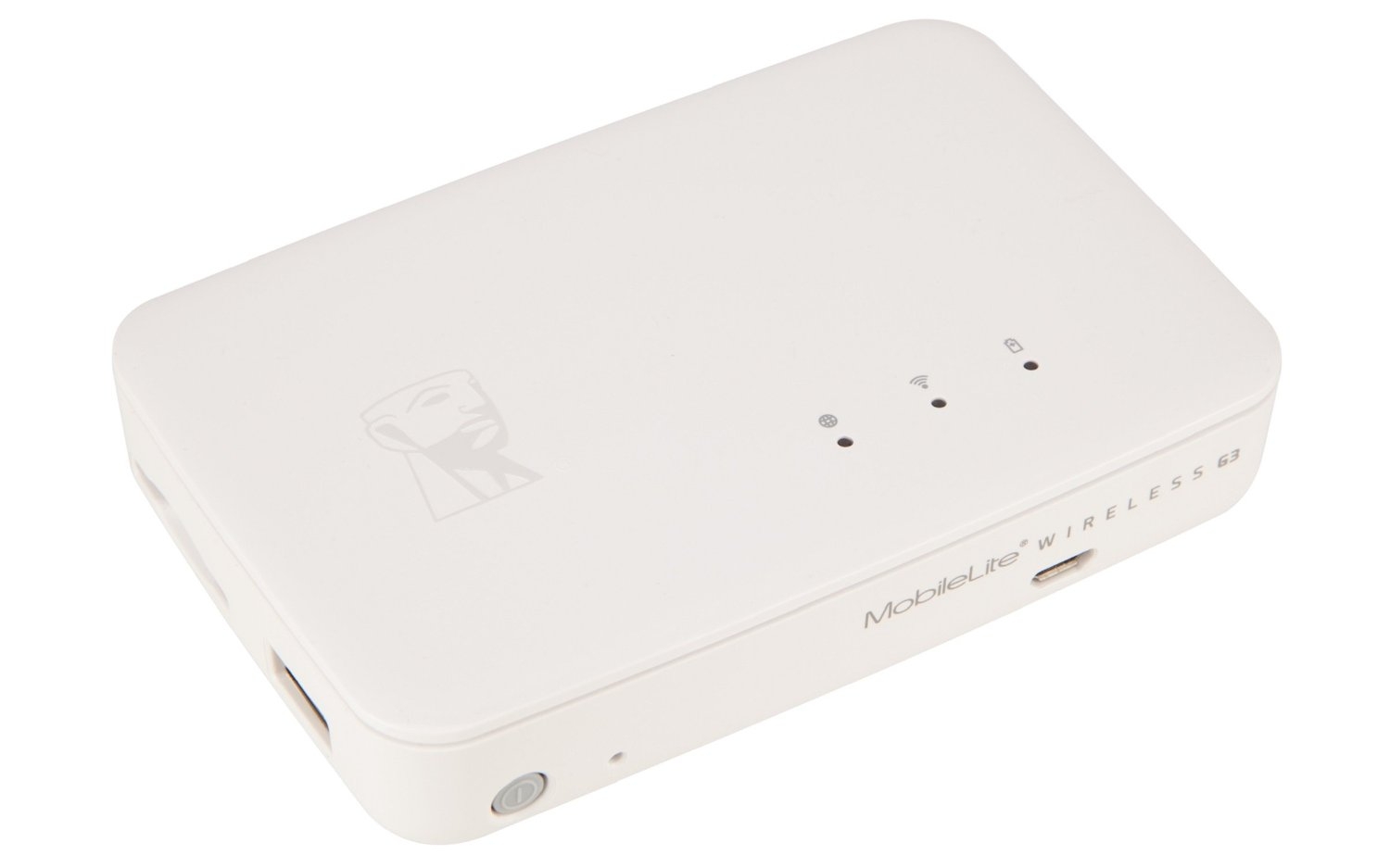 The MobileLite doesn’t have any built-in storage of its own, but it acts as a versatile wireless adaptor that will allow you to connect other storage devices that you already own.

There are both USB and SD card slots so that you can quickly plug in a USB stick or memory card and then transfer photos and other files via the MobileLite’s built-in WiFi.

It even has an Ethernet port as well, which means that you can use it as a handy portable router for devices that don’t have their own WiFi.

The rechargeable battery in the G3 will last for more than 10 hours, and can even be used to top up the battery of your iPhone or iPad as well. 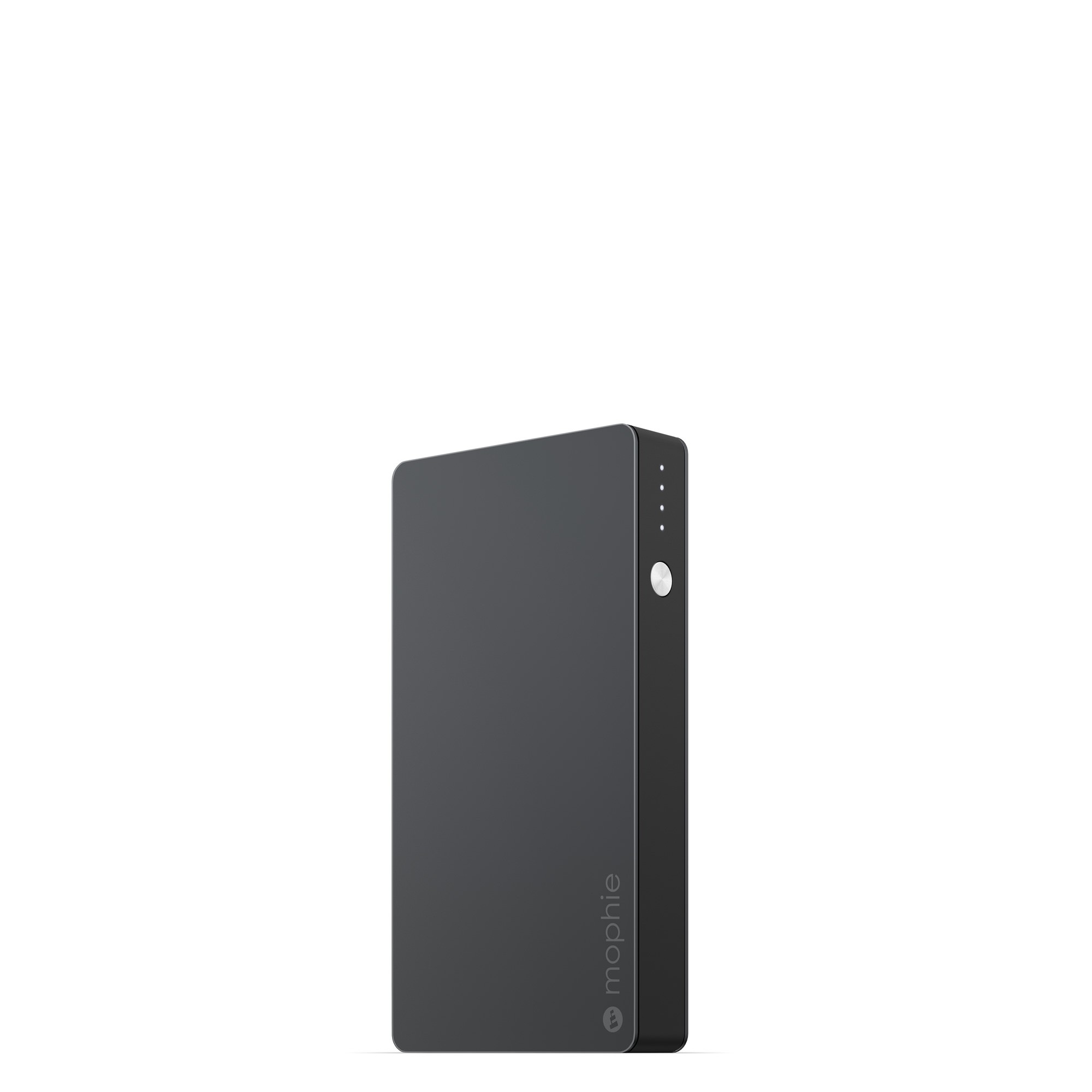 Mophie’s Spacestation is a handy all-in-one device that provides a battery charger and flash storage all wrapped up in a sturdy protective case for your iPhone.

But, of course, you can only use the Space Pack with just a single iPhone, so if you want a bit more flexibility then you could look at the Spacestation instead.

The Spacestation is first and foremost a charger, with a 6,000mAh battery that’s powerful enough for multiple charges of an iPhone 7. But it also includes either 32GB or 64GB of storage so that you can back up your files while you’re topping up the battery.

It is a bit pricey, but might be worth it for the sheer convenience of having a single device that provides both storage and battery power when you’re travelling.

In the US, the Spacestation isn’t available directly through Mophie, but you can get your hands on a certified refurbished version for the fraction of the cost on Amazon, at $14.99 (compared to the original cost of $149.99). Though if you prefer to buy new, you can also get it on Amazon for $54.94 – which is still a steal! 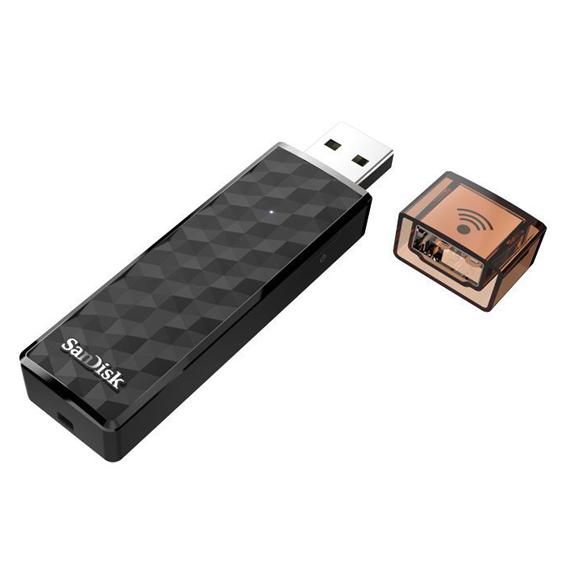 SanDisk’s Connect is a pocket-friendly little memory stick that provides up to 200GB of storage. It uses Wi-Fi to connect to your iOS devices, and the SanDisk app has a handy back-up option that will automatically copy any new photos and videos from your Camera Roll straight on to the Connect.

You can also plug the Connect into a USB port on a Mac or PC too, although it’s odd that SanDisk didn’t upgrade to a USB 3.0 interface, as USB 2.0 is a bit slow for transferring large video files. 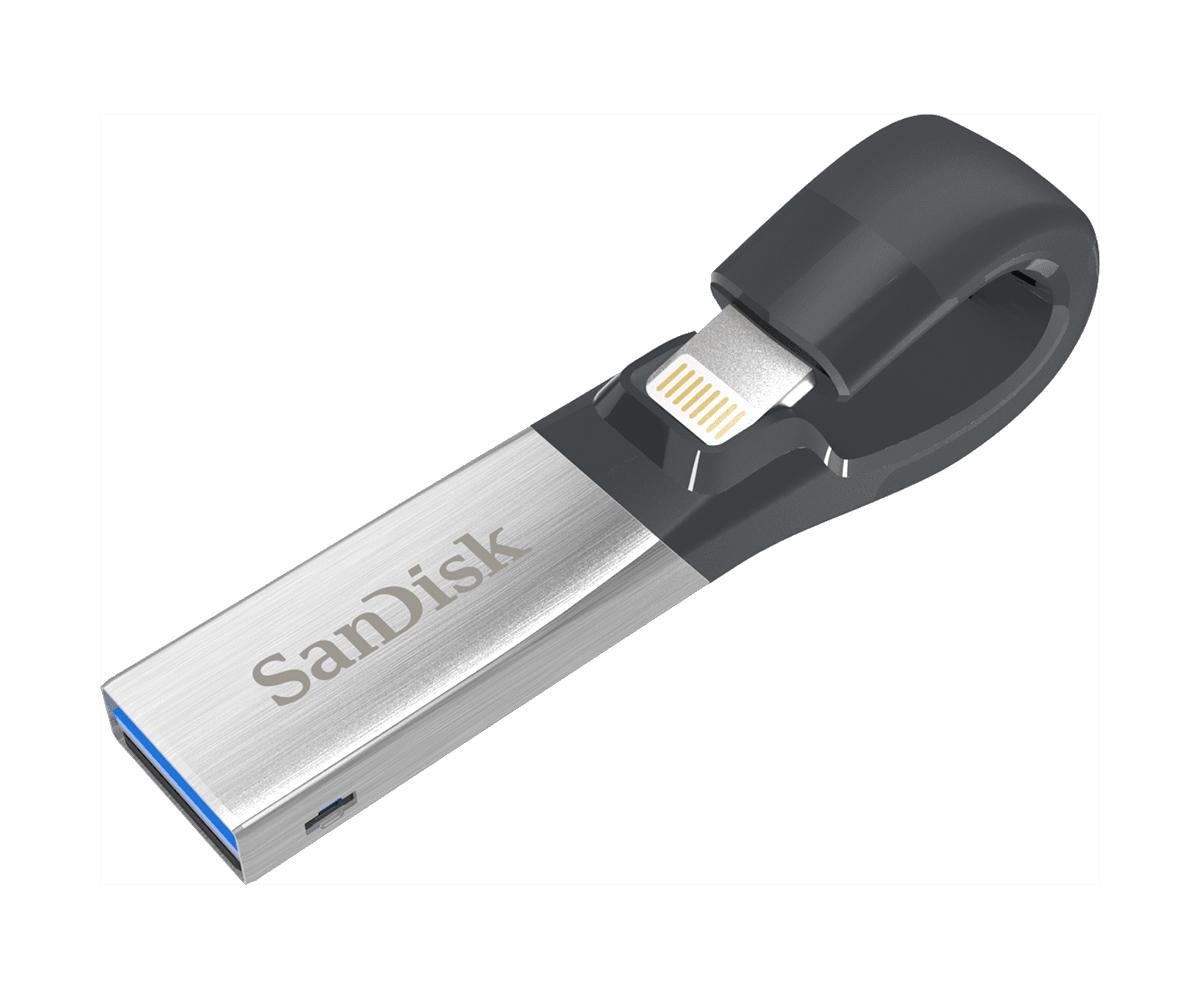 The iXpand ditches the Wi-Fi of the Connect and opts for a Lightning connector for plugging straight into your iOS devices instead (but not, of course, older models with the original 30-pin connector).

The iXpand only goes up to 64GB of storage, but the Lightning connector provides faster transfer speeds than wifi for 4K videos and other large files. It’s also got a speedy USB 3.0 interface so that you can use it with a Mac or PC as well.

There are plenty of options for uploading files from your iPhone or iPad to cloud-based online storage services, including Apple’s own iCloud, of course, as well as rivals such as Dropbox, Google Drive and Microsoft’s OneDrive.

These all provide free options with varying amounts of online storage – iCloud gives you 5GB for free, while Google lets you have a full 15GB.

Just remember, though, that you’ll mainly rely on Wi-Fi to upload files to these services, which will be pretty slow for videos and other large files.

These services also tend to focus on file-synchronisation rather than backup – which means that if you delete a file from your iPhone then that file will also be deleted from your cloud storage too.

So, for both speed and safety, it’s well worth using one of the external storage devices reviewed here if you need extra storage or backup for your iPhone or iPad.