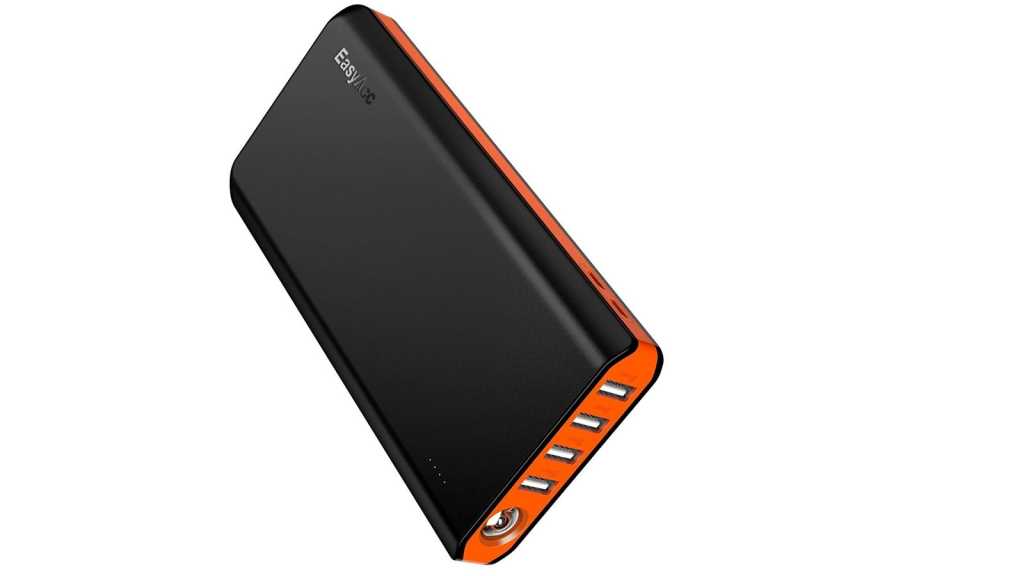 The iPhone and iPad, Apple’s most portable computers, have progressed hugely since the original models were released in 2007 and 2010 respectively. Battery life is one area that’s seen a huge improvement, with the 3969mAh battery on the iPhone 11 Pro Max a far cry from the original’s 1400mAh cell.

Modern iPhones and iPads should easily last a full day of moderate usage, but what if you want more? What if you know you’ll be spending a long time away from the charger and will need some extra juice? A power bank or battery pack is the perfect solution in this scenario, offering multiple charges for your device in a relatively small package.

There’s a huge range of options out there, so we’ve picked out ten we think will serve you well. 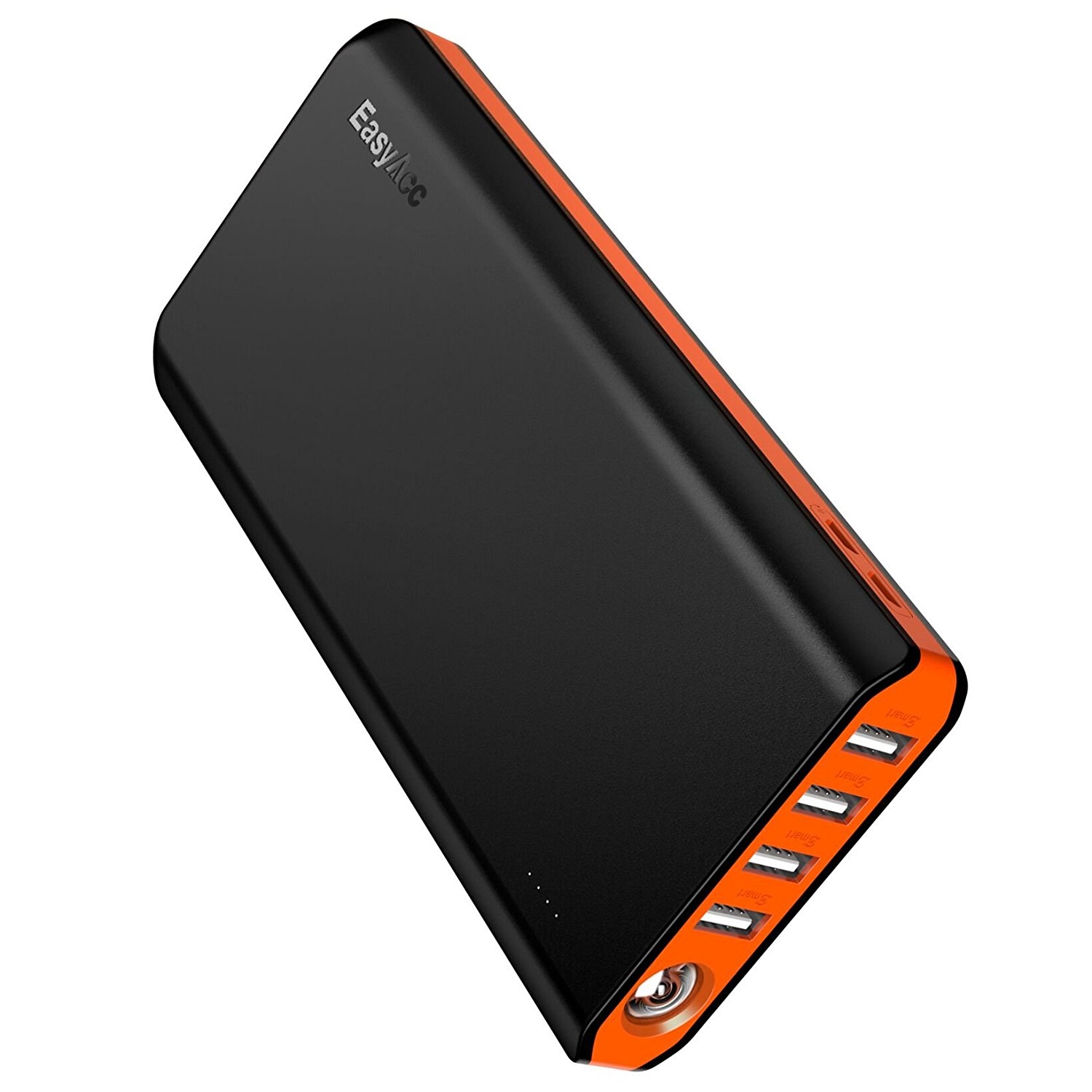 EasyAcc’s power bank provides excellent value for money, complete with a staggering 20000mAh capacity that should easily cover you for multiple days of battery life.

To put it into perspective, EasyAcc claims it can charge an iPhone 7 six times when full. If you leave the house and you’ll be away from a plug for a couple of days, it could be all you need. What’s more, it’s capable of charging up to four devices at once, and even comes with a little torch.

Once you finally run down the capacity, just plug it into the charger and it will be ready to go again in just 6 hours.

You might think of portable speakers when you think of JBL, but how about one with a power bank built-in?

The Charge 4 includes a 7500mAh cell and Bluetooth speaker in one compact package. Its versatility makes it perfect for trips away, with the power bank able to charge most iPhones at least twice.

It also works well as a portable speaker, with Bluetooth connectivity and a bass radiator that gives it a nice, strong sound. There’s even a noise-cancelling microphone for taking phone calls.

The rubber casing of the Charge 4 provides good protection for bumps and drops when you’re in the great outdoors. It’s got IPX7 for water resistance, which means it can cope with being submerged in up to 1m of water – so it’s a good choice if you’re out in bad weather or splashing around on a beach.

You can link multiple Charge speakers together to really pump up the volume, and there’s a Social mode that lets you pair it with up to three Bluetooth phones or tablets all at once so that your friends can join in and play their own music too.

Despite its compact size, the Charge 4 manages to squeeze in a powerful 7500mAH rechargeable battery. That should last for up to 20 hours when just playing music, but it can also fully recharge most iPhones and still have enough juice left to keep playing music for a few hours. 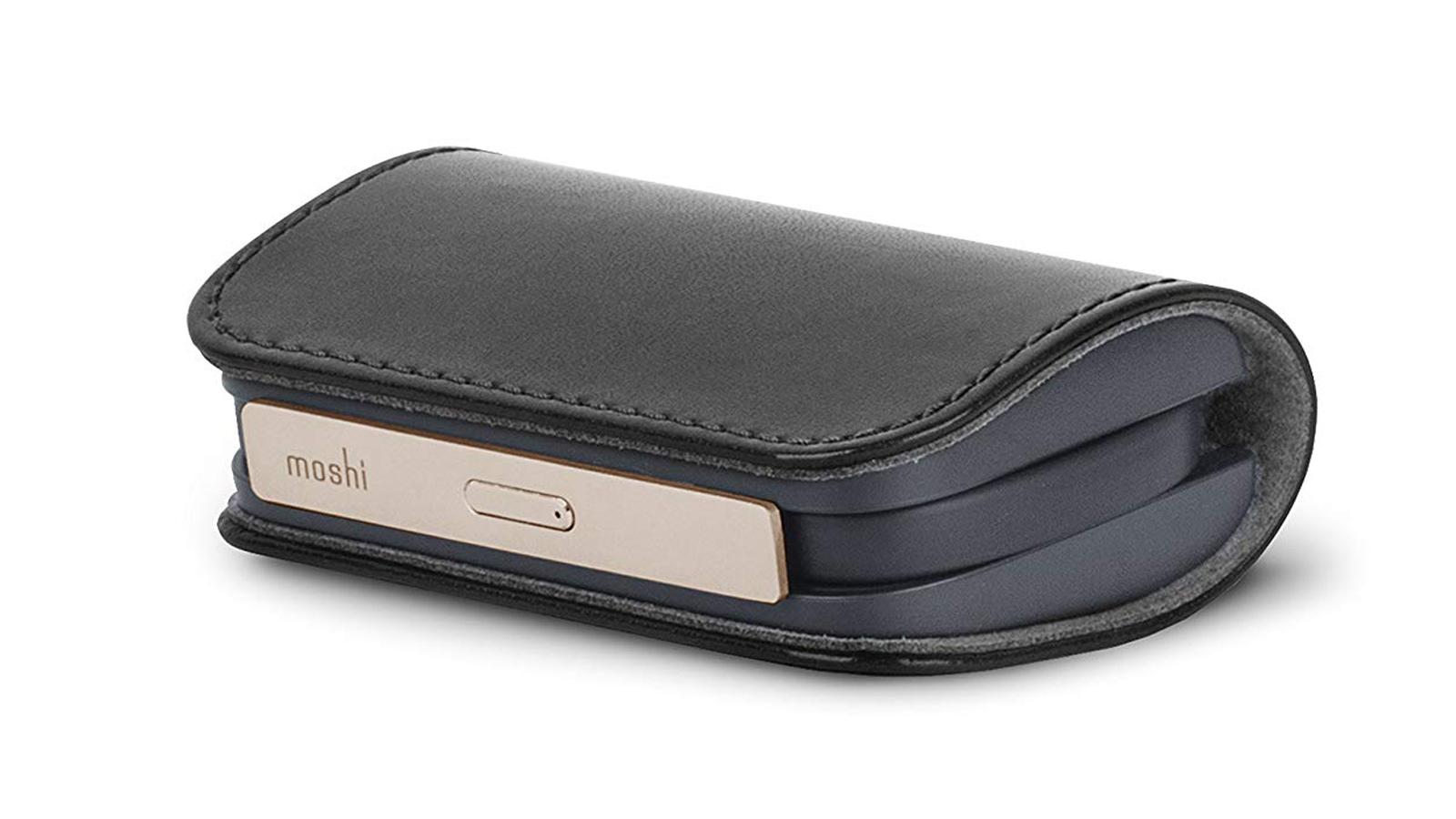 The Moshi IonBank 3K isn’t cheap, but it’s well worth the cash. Absolutely oozing with class, this premium-design power bank has a magnetic vegan leather case, flat, tangle-free Lightning and USB connectors built in, and an aluminium front panel with a single LED built into the power button.

Rated at 3200mAh and running at around 65 percent efficiency rate, the Moshi will offer most standard iPhones a full charge. For the Plus or Max models you’re looking at more like 70- 80 percent charge, but even this is useful when you’re out of battery and away from mains power.

The charging rate is fast, with the IonBank 3K building in a 2.1A output and 2.4A input. It supports passthrough charging, here known as SmartSense, which means you can charge both power bank and iPhone at once. Moreover, it supports synching when the USB port is plugged into a computer. 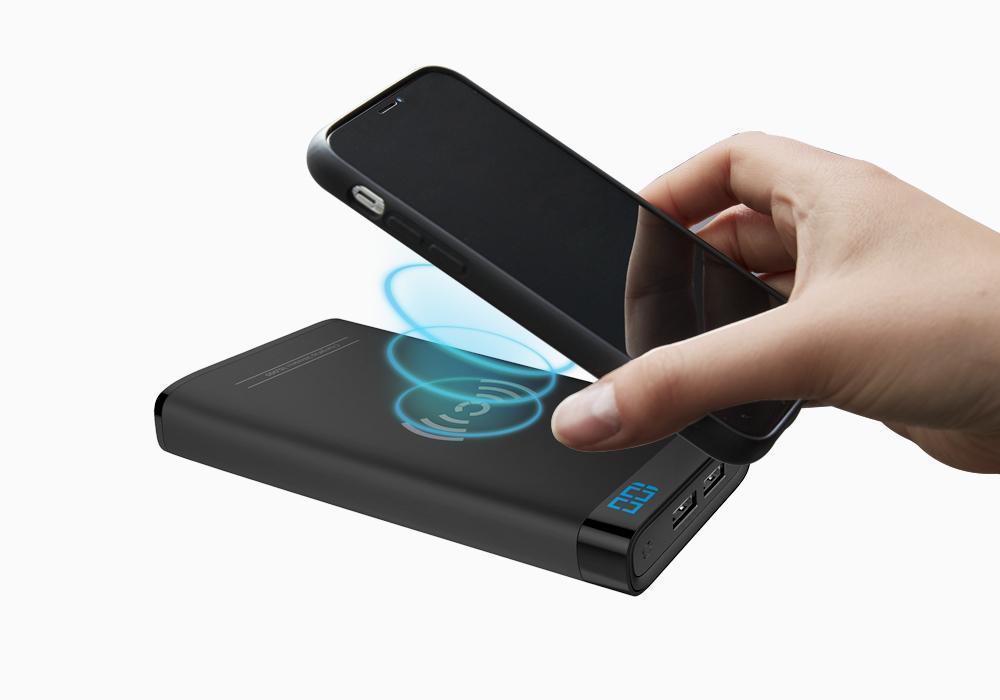 This Cygnett power bank not only packs 10,000mAh of power but also supports Qi standard wireless charging for your iPhone. It offers Fast Charging up to 7.5W (and 10W for Samsung devices), and promises to charge Apple devices 50% faster than other power banks.

A useful feature is the digital display on the wireless power bank that shows you remaining percentage of power – which allows a less vague charge status than the power banks that only use a four-light meter.

While the Cygnett ChargeUp Swift is portable, it is heavy. This is due to the chunky frame which adds roughly an inch in width.

The ChargeUp offers one micro-USB port and two USB-A ports. It also only comes with a micro-USB cable, so you would need your own Lightning charging cable if you wanted to power up your iPhone quickly. Of course, you could put the hassle of cables aside altogether and go fully wireless. 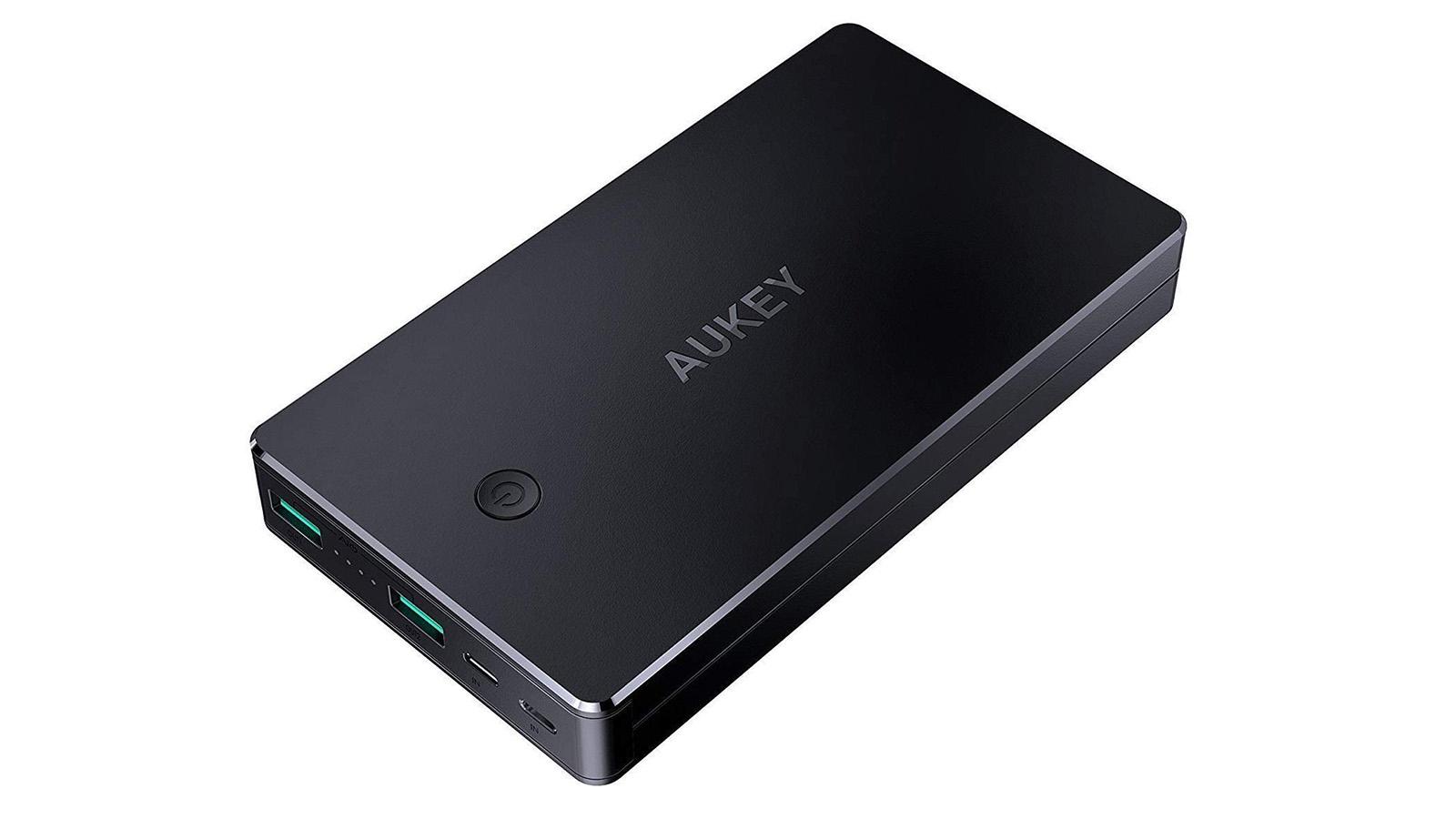 All power banks work with iPhone, and some of the best suited have a built-in Lightning cable with which to charge your phone. This Aukey does not come with said cable, but it goes one better: it has a built-in Lightning port, which saves you the job of needing to scramble around for a Micro-USB or USB-C cable when you need to recharge the power bank.

The Lightning Power Bank is of a useful 20,000mAh capacity, which will keep your iPhone going days on end, but it’s blocky black matte plastic design is slightly less in keeping with the stylish tech Apple fans tend to carry. Look past this, though, and it’s got some great functionality.

As well as being able to charge the power bank with a Lightning cable, there’s also a Micro-USB input here for non-iPhone users. Both operate at 10W, and these days we prefer to see inputs equipped with Power Delivery to speed up charging of high-capacity banks such as this.

There are also two full-size USB outputs, into which you can plug any cable you like. Used independently they can run at 12W, but when combined the maximum total output of the Aukey is 17W.

The Aukey Lightning Power Bank seems somewhat old-fashioned compared to some fancier models on the market, but it will still do a fine job of keeping your iPhone topped up. 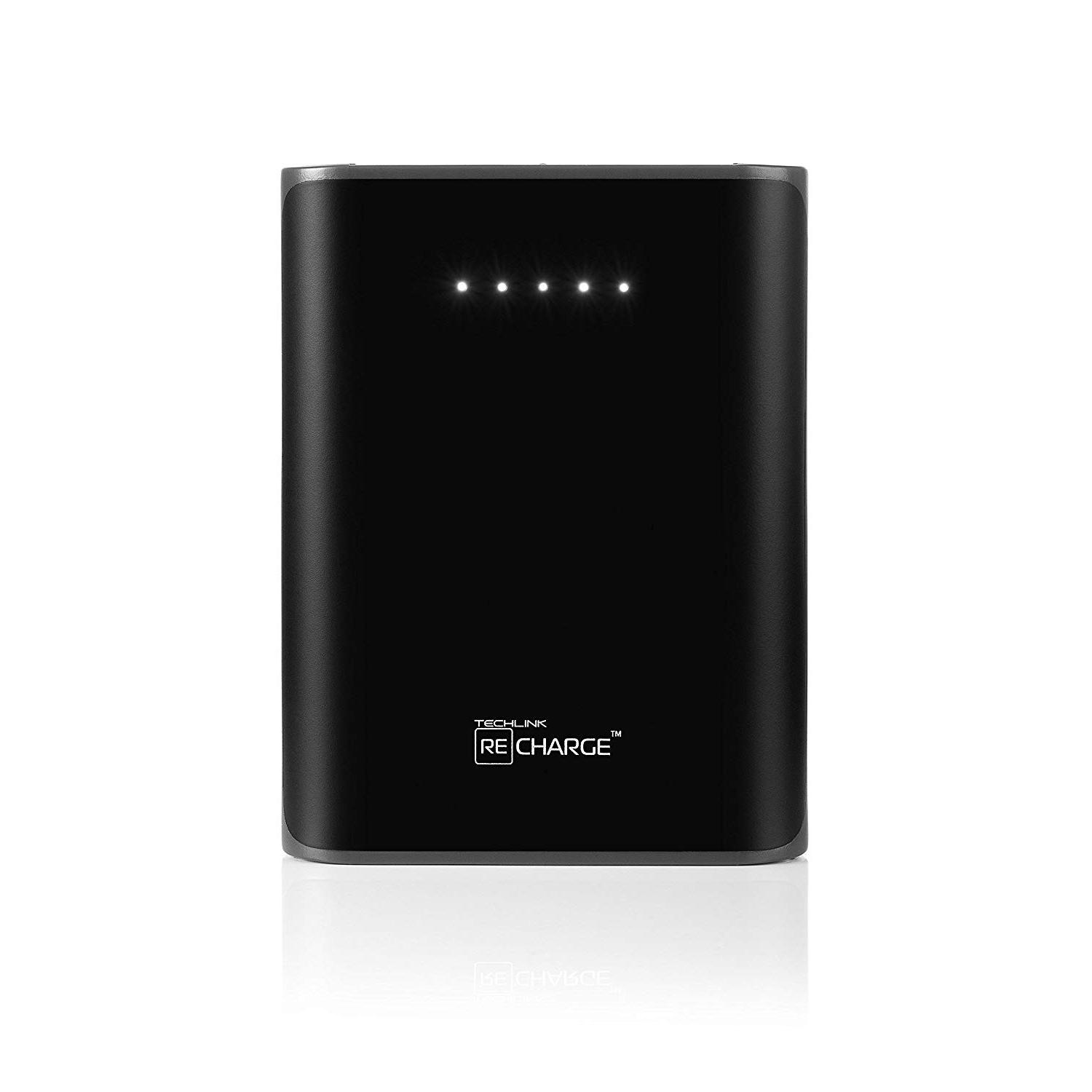 The Techlink 13600mAH is a powerful battery pack that can charge your iPhone up to 8.8 times. It has two USB ports, so you’re free to charge your iPhone and an iPad at the same time if you wish. It comes with useful indicator lights that tell you when the power bank is low on charge as well.

The Techlink power bank is designed to prevent overheating, overloading, over-charging and short-circuiting, and comes with a 2-year warranty.

You can buy it now for £19.85, but we haven’t found anywhere that delivers to the US. 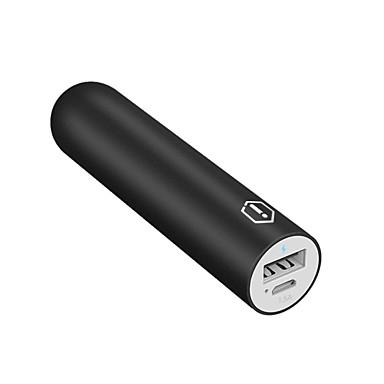 That capacity is more than most smartphones, and this slim battery pack will give you the reassurance of a full recharge. It recharges via microUSB pretty quickly, and we’ve used it to fully charge several iPhones. 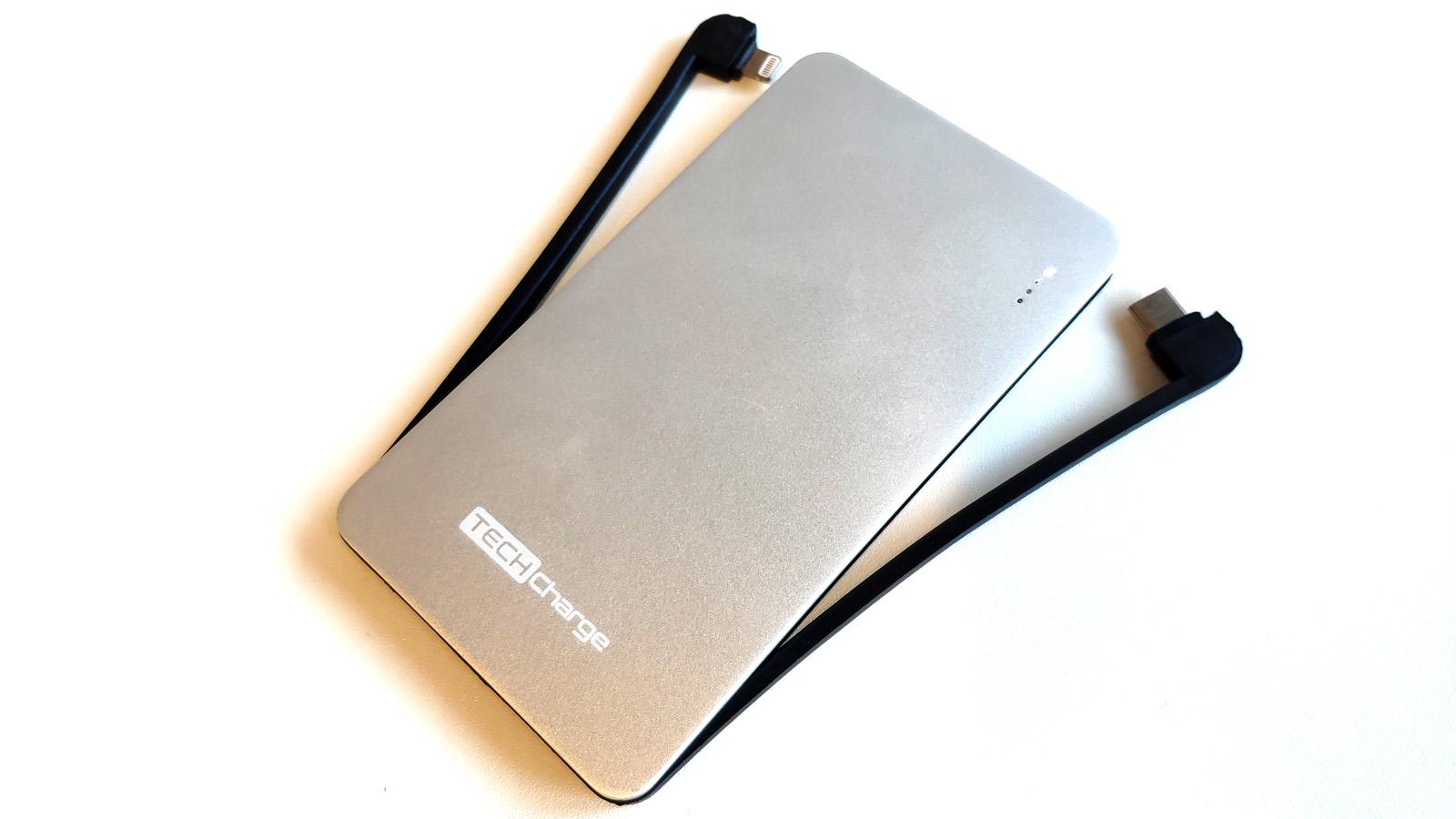 This Super Slim power bank from Tech Charge appeals for its compact design and built-in cables for Lightning (Apple-certified) and USB-C. With an additional full-size USB output, it’s a versatile gadget for charging whatever device you have to hand, even if it’s not an iPhone.

In our testing we were slightly concerned that we could hear something knocking inside when shaking the device, but in every other respect it feels well made and builds in all the necessary safeguards for protection against over-charging, short-circuiting and so forth. It also comes with a one-year warranty.

The design is aesthetically pleasing, with an aluminium fascia front and back, spoiled only by a black plastic band that circles around the edge. It uses four LEDs to show at a glance how much power remains, and when the battery is depleted it can be juiced up over a 10W Micro-USB input.

The Tech Charge bank is speedy but not groundbreaking, with each of its three outputs able to deliver up to 12W – more than the standard iPhone charger, but less than some power banks. It does not support passthrough charging, but with a relatively low-capacity 5,000mAh battery inside it shouldn’t prove too much hassle to recharge.

That 5,000mAh battery is good for between 3,000 and 3,500mAh as delivered to your device, so at least one full charge of your iPhone with some juice to spare for emergency situations.

You can buy it now for £34.95, although we haven’t found anywhere that delivers to the US. 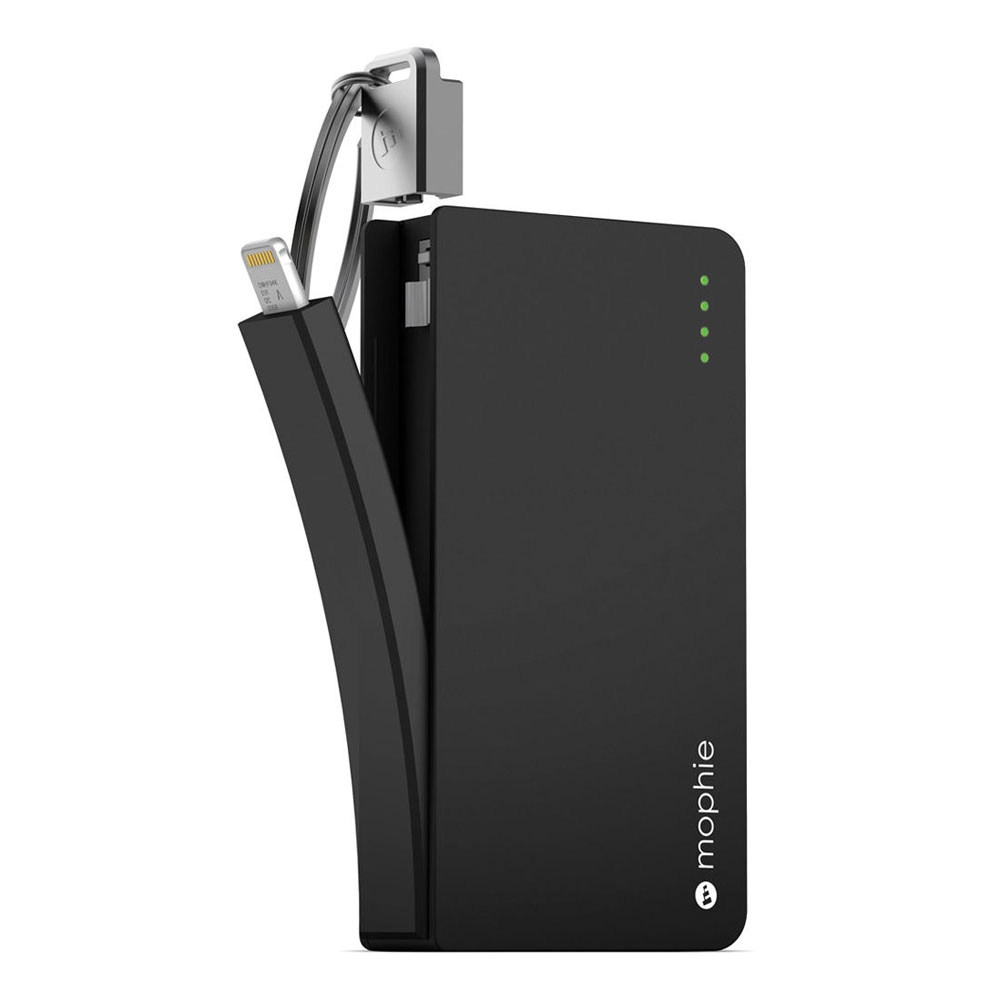 Mophie’s Power Reserve really is designed to be pocket-sized – in fact, it even comes with a keyring attachment so you can keep it with you at all times.

The Power Reserve measures just 72mm long, 38mm wide and 14.5mm thick, so it’s easy to keep in your pocket or a bag. It’s available in a number of different colours, and there’s a quick-release button that lets you detach it from the keyring when you need to use it.

That compact design means that its battery capacity is relatively limited at 1350mAh, and Mophie says it is primarily intended for use with an iPod or iPhone rather than larger devices such as an iPad. Even so, that should be enough to give you about 50% extra charge and keep you going for a few more hours.

There’s a Lightning cable that folds out from the side, but – apart from a USB connector to charge the battery itself – there are no other connectors, so you won’t be able to use it with older iPods and iPhones that use the original 30-pin connector. 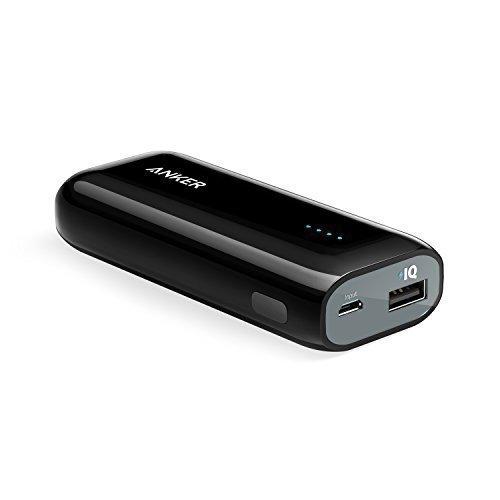 While we haven’t personally tested this battery pack from Anker, it promises a powerful 6,700mAh, which is enough to charge an iPhone 7 or iPhone 6 twice, and an iPhone 7 Plus once. Anker prides itself on it being as small as a chocolate bar, which means it can fit easily in your pocket or bag. Plus, a durable exterior makes it drop-proof.

To charge the Anker Astro itself takes 5.5 hours, which then charges connected devices at a 2A output. At £16.99/ US$21.99 you get an affordable power bank that comes with a travel pouch and an 18-month warranty.