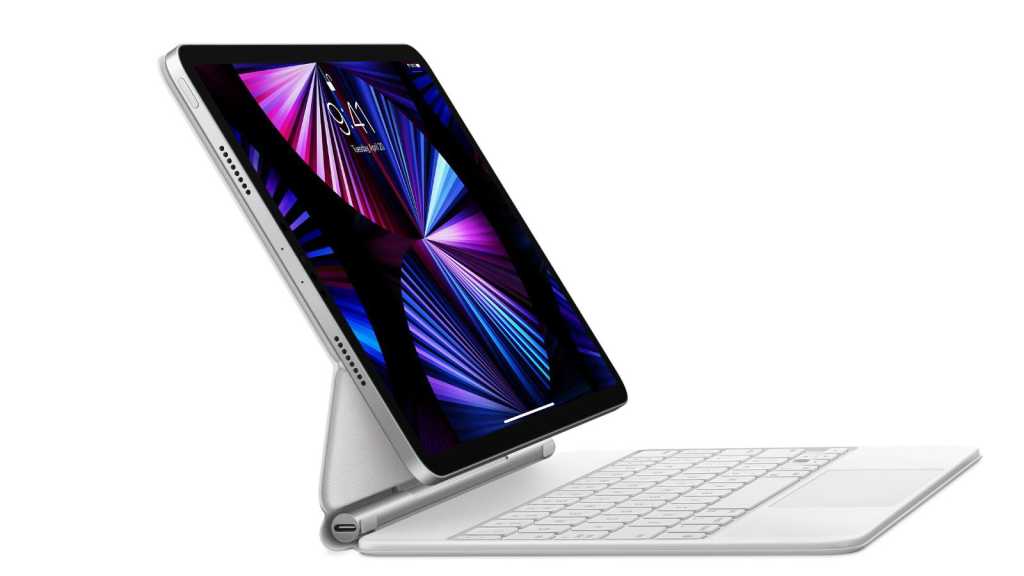 Apple has always marketed the iPad as a device for productivity, but its form factor has often placed limitations on the amount and quality of work that can be completed.

This is perhaps most apparent in the lack of a physical keyboard. Although the versatility of an on-screen keyboard is great, it undoubtedly holds you back when typing out long articles or sending multiple emails. It can also be frustrating to lose so much of the screen to a virtual keyboard.

Apple has tried to address this in its iPad Pro line, but even then the keyboard is an optional accessory. With more and more iPad models supporting the smart connector in addition to Bluetooth connectivity, there are a huge variety of keyboard options on the market. Here are our favourites.

This article covers accessories for a variety of iPad models, but for more specific advice read our separate guide to the best iPad Pro keyboards. 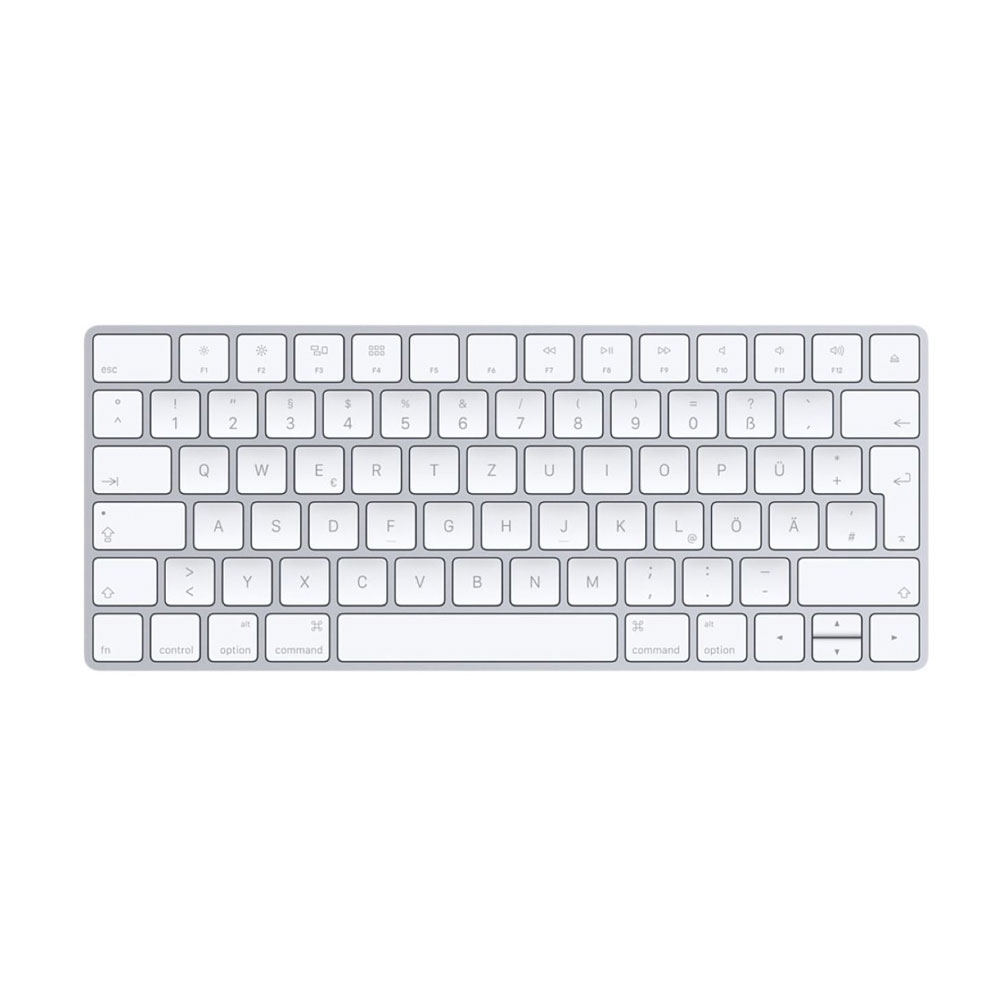 The Magic Keyboard is a Mac staple, but it can be an iPad one too. An interpretation of this is now an official accessory for the latest iPad Pro – we look at this next – but in fact this keyboard can work with practically any iOS device.

The advantage of using a standalone keyboard such as this is that it has larger keys than any of the iPad keyboard-covers, and the keyboard panel is angled upwards at a more comfortable angle, so you can get down to some serious typing when you need to.

The Magic Keyboard also has a rechargeable battery that Apple says can last for a month between charges. And, of course, if you’ve already got one of these keyboards (or one of the older Wireless Keyboards which work with iPads too) then you don’t need to spend any extra money buying a brand-new keyboard just for your iPad.

Apple also updated the Magic Keyboard when it released the new 24in iMac, but the revamped model with colourful liveries and Touch ID are not available to buy separately at the moment. If and when it does arrive, we’re sure it will be an excellent companion for an iPad.

The downside to the existing keyboard is that it’s not really very portable, and doesn’t act as either a cover or a stand for your iPad, so you might still need to spend more money on accessories somewhere along the line. 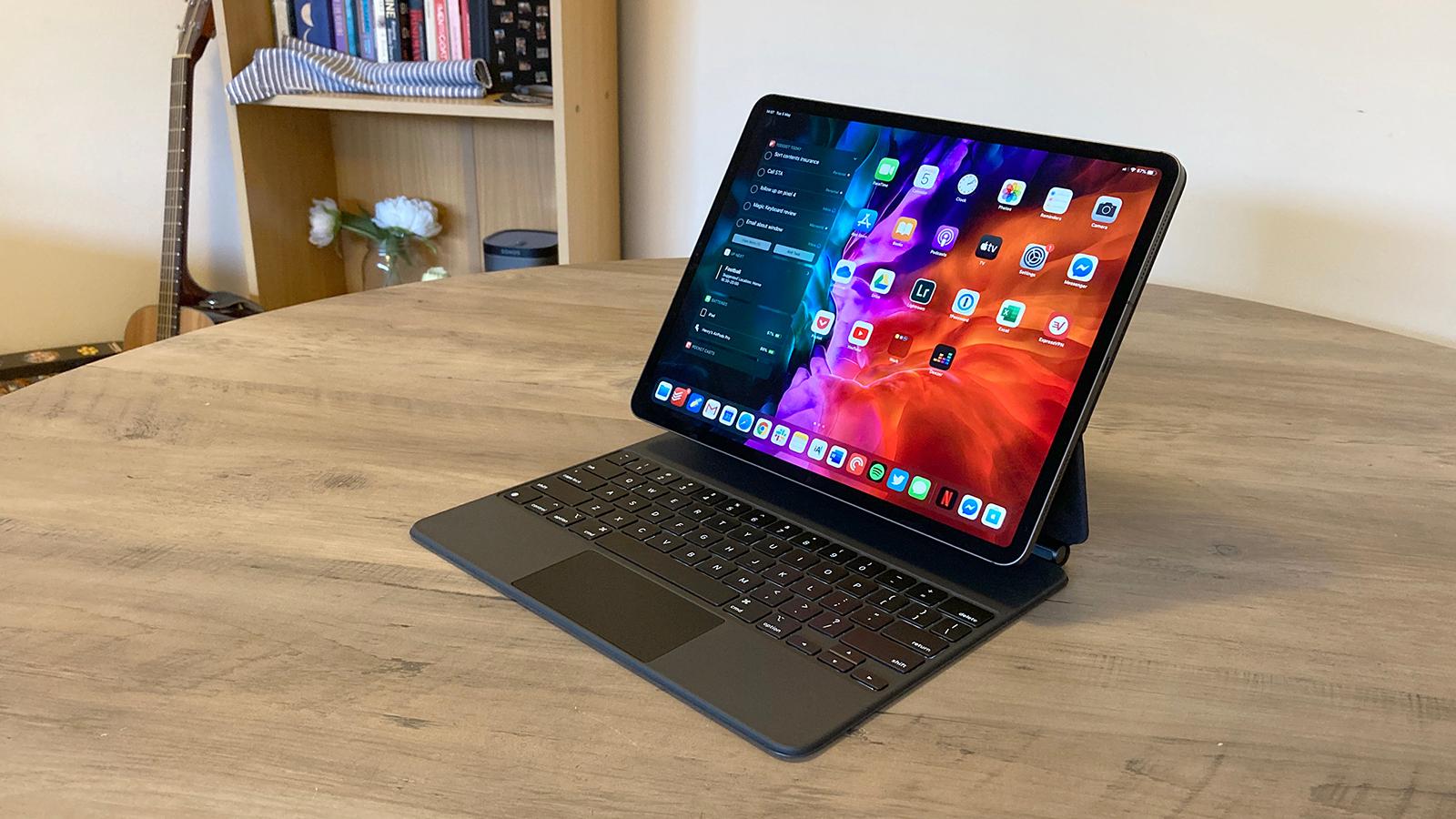 Okay, now we’re talking. Apple dropped some jaws when it first unveiled the Magic Keyboard designed specifically for the iPad Pro models. Now on its second iteration (to accommodate the extra girth of the M1 powered 12.9in iPad Pro), the ‘floating’ design will prove an impressive home for any 3rd, 4th or 5th generation Pro.

The keys are much more comfortable to type on than the older Smart Keyboard Folio, although they’re slightly cramped compared to a full-sized laptop. And there’s a trackpad (cleverly supported in iPadOS 13.4 onwards), which is transformative.

A floating cantilever holds the iPad in position; not only does it look cool, it helps elegantly solve the weight distribution issue while letting you adjust the screen angle on a hinge. Bear in mind, however, that you can’t fold the keyboard back on itself when not in use – you have to detach the keyboard completely when you want to do something with just the tablet.

Nevertheless, this is undoubtedly the best Apple keyboard you can get for the iPad Pro.

Read our full Magic Keyboard for iPad Pro 12.9in review 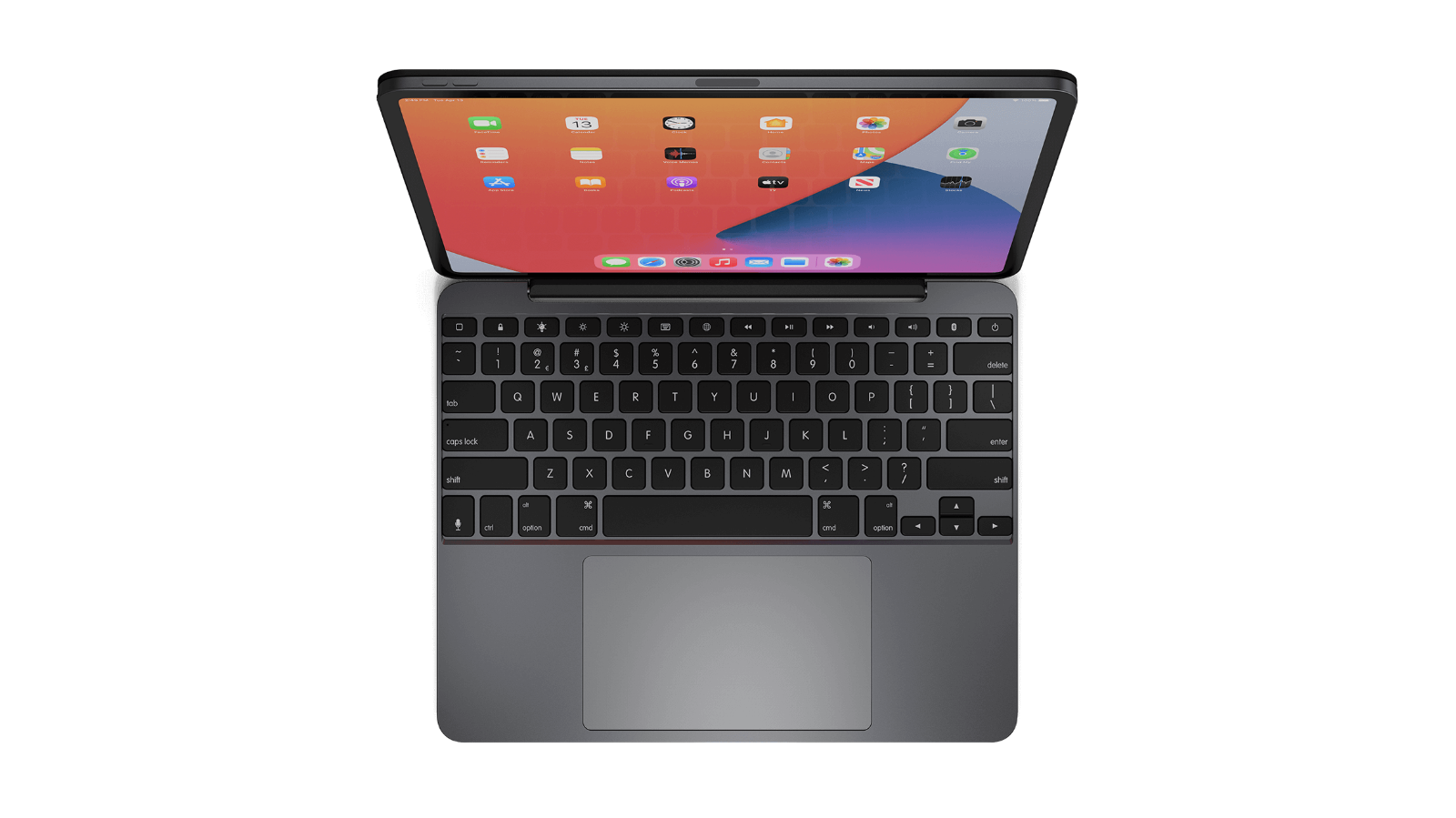 Brydge has a long history of building top-quality iPad keyboards, and the 12.9 Max+ is arguably its best effort to date.

The aluminium case has a weighty heft to it, but that’s a good thing, as the 2lbs help create a very stable host for the large 12.9in iPad Pro, even when perched on your lap. A rubberised lining to the lid ensures no scratching of the tablet, with a lower lip and magnetised area holding the device firmly in place. Removing it is easy though, as there are recessed areas of the lid that allow you to simply push the iPad forward and out. Very simple, very nice.

The keyboard itself is excellent. Keys are large and have decent travel, making it a joy to work on. There are dedicated ones for the likes of media control, screen brightness, volume, keyboard backlight brightness, and to return to the Home Screen.

You won’t necessarily need them though, as the large trackpad is fully compatible with iPadOS, including smooth delivery of multi-touch gestures. It’s very enjoyable to navigate through the system just like you would on a Mac, with the availability of the touchscreen at all times.

There’s a solitary USB-C port on the 12.9 Max+, from which you can charge the battery, which Brydge claims will last for 40-hours when using the backlight or much longer without. In our tests it certainly kept going for ages without needing a recharge.

Combining the trackpad and keyboard into a sturdy case makes the 12.9 Max+ feel as close as you can get to using a MacBook Pro when you’re actually on an iPad. It might not have the instant wow factor of the Apple Magic Keyboard for iPad Pro, but at around £100/$100 cheaper there’s plenty to make you smile.

Those with 11in iPad Pros or the latest iPad Air also have similar versions of the product available, so there’s no need to miss out. 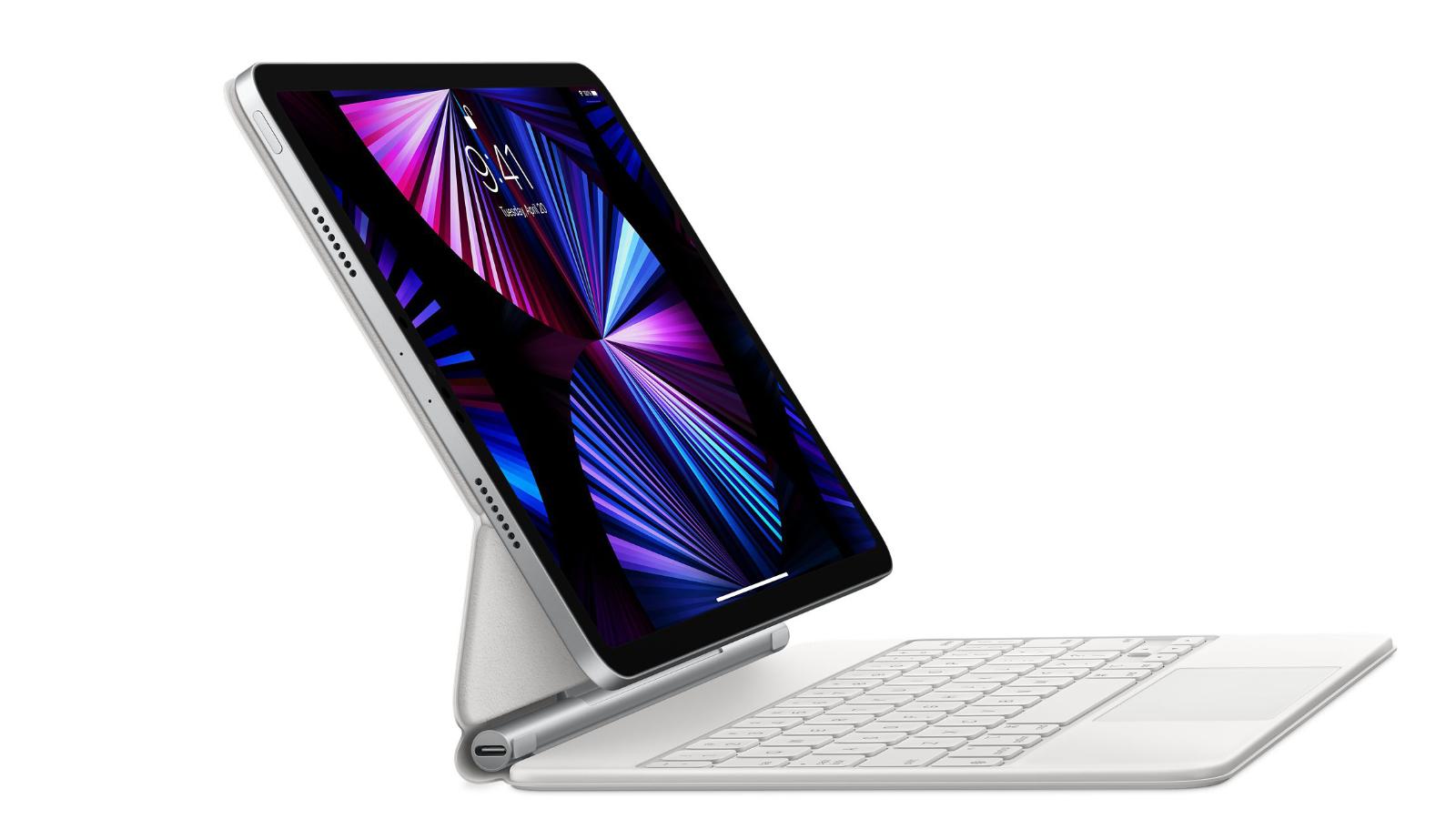 While the iPad Pro 12.9in has its Magic Keyboard, as outlined above, that doesn’t mean those with 11in iPad Pros or the newly redesigned iPad Air get left behind.

Apple also offers its beautiful ‘floating’ iPad keyboard for the smaller siblings. You’ll get the same magnetic plate that holds the iPad in place, while underneath is the excellent scissor keyboard.

Adding a trackpad remains the truly breakout feature on this generation of cases, as it unlocks some of the potential of iPadOS, making it much closer to a laptop replacement. Multi-gesture support is reliable and responsive, so you can use the iPad without needing to take your hands off the keys if you so choose.

Basically it’s the same as the bigger variant, but matched to perfectly fit the 11in iPad Pro (3rd gen) and iPad Air (4th gen). 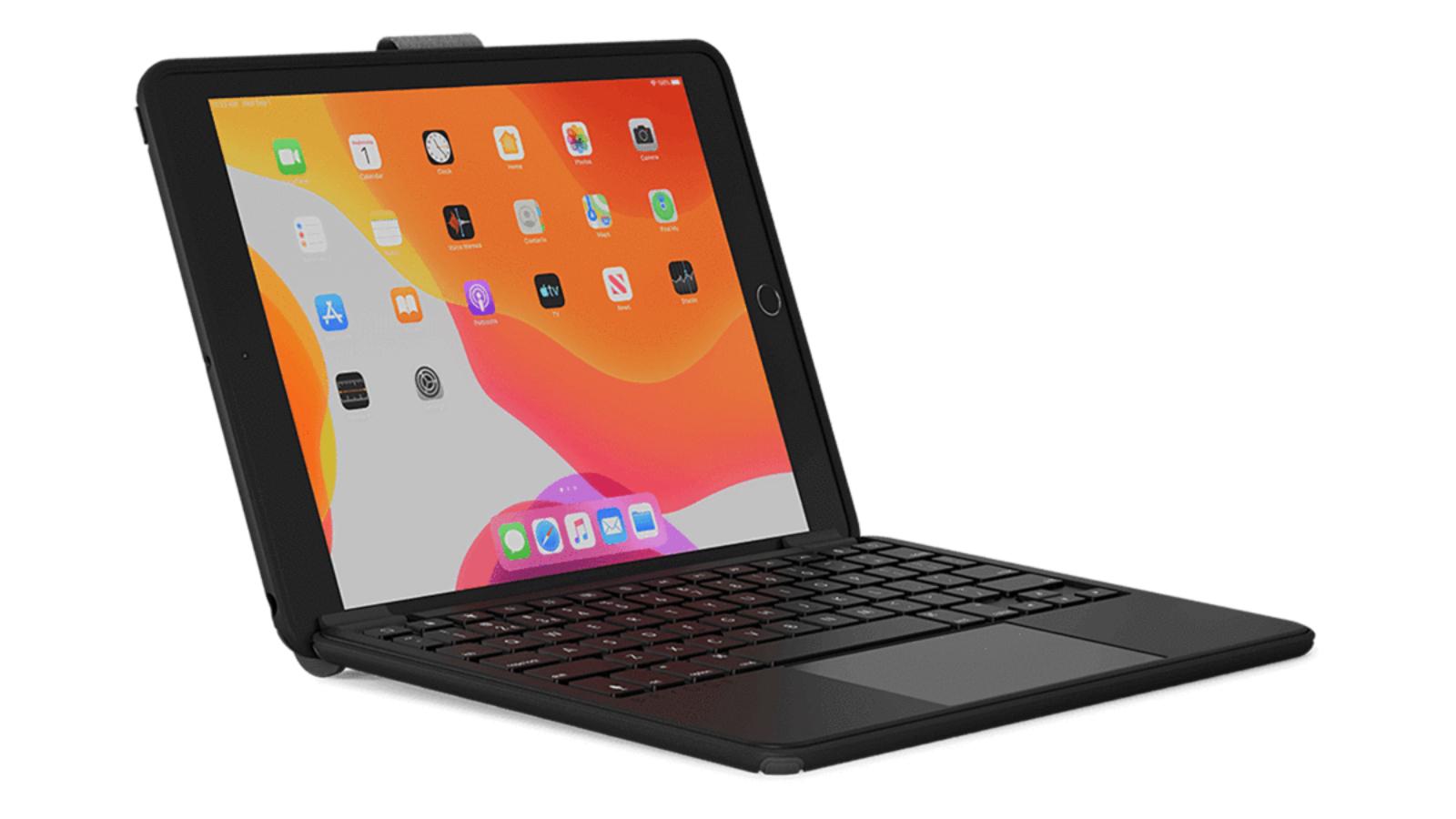 As we’ve already seen, Brydge knows a thing or two about iPad keyboards.

With the new 10.2 Max+ you get an excellent typing surface, assisted by a trackpad that’s fully compatible with the trackpad/mouse support recently introduced by Apple in iPadOS.

Backlit keys mean you’re able to work in dim rooms, plus the 6-month battery life boasted by Brydge means you’ll do so for quite a while. Although, using the backlight constantly will lessen those impressive hours.

The lid of the case doubles as a protective case for your 7th and 8th generation iPads, which can be seperated from the keyboard if you just want to use the device in its traditional tablet manner. There’s also a fabric loop that will keep your Apple Pencil safe.

Neat and tidy package for the 10.2in iPad user.

Logitech Slim Folio for iPad 9.7in – Best typing experience for 9.7in iPads 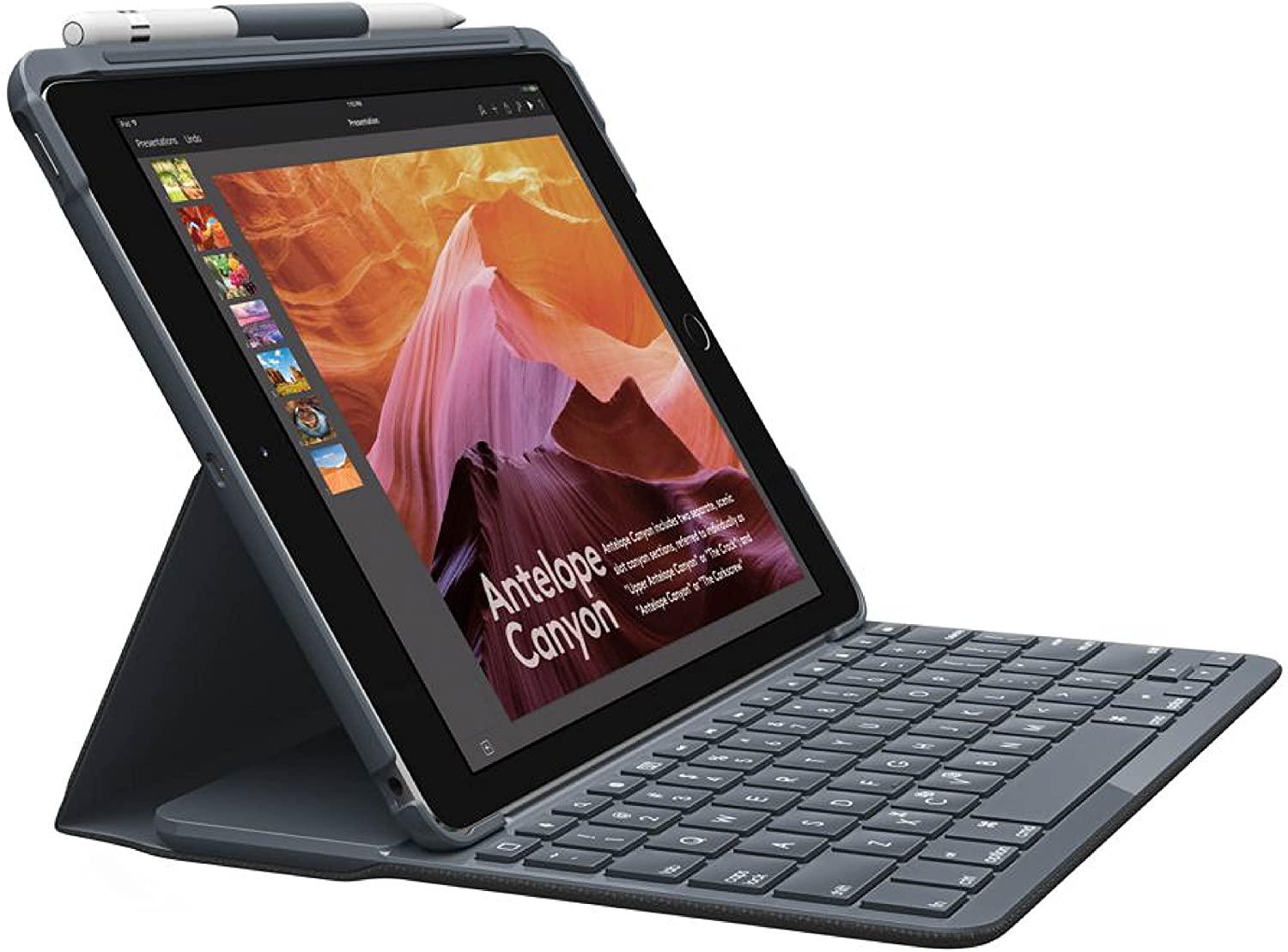 Logitech has been the go-to alternative to official Apple keyboards for a number of years ago, and with good reason.

The Slim Folio streamlines this experience, with the keyboard integrated into a fully functional case. The keys are tactile and responsive, offering a good amount of travel that makes it comparable to many laptops.

The case is also great if you want to forget about typing, offering 10- and 58-degree screen angles depending on what you’re doing. With the 9.7in iPad now supporting Apple Pencil, there’s even a useful holder above the screen.

Although it doesn’t support the smart connector, turning Bluetooth on is a very small price to pay for an excellent keyboard. 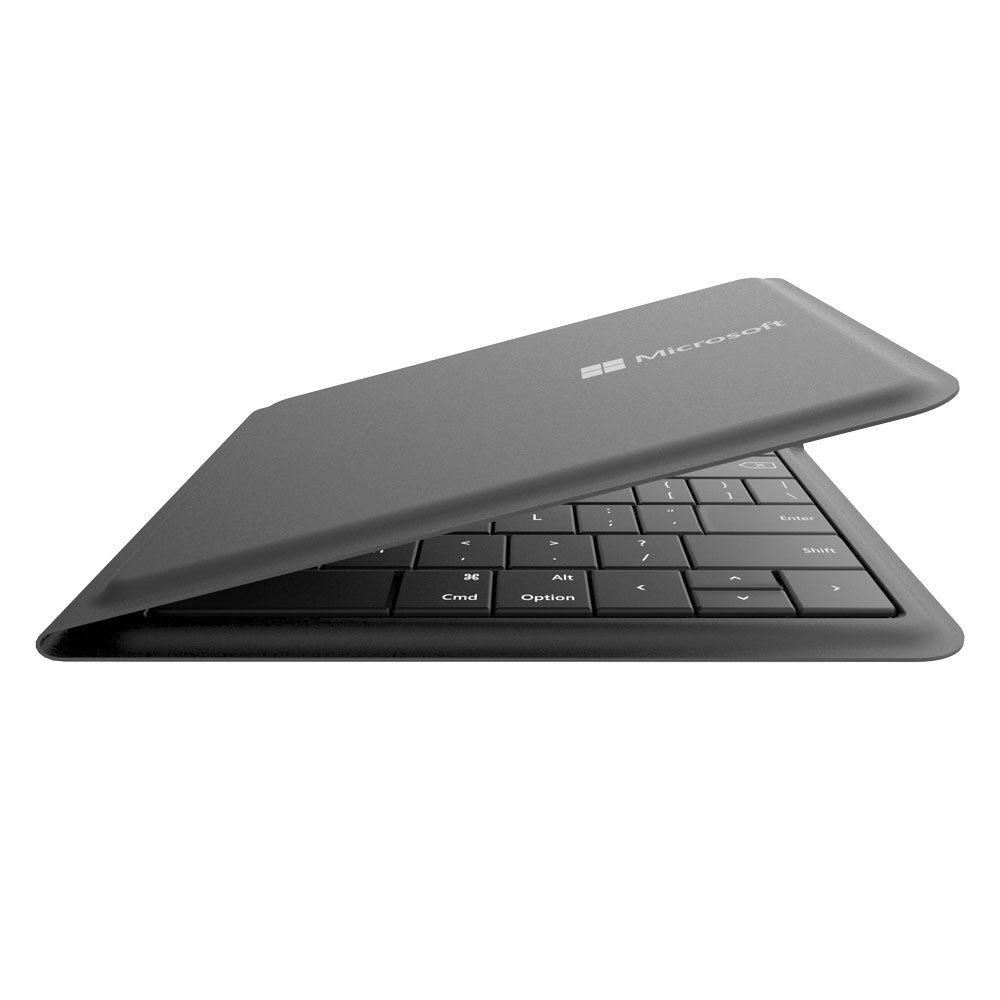 Microsoft’s keyboards don’t have a reputation for being pretty, but they’re always well-built, comfortable to use, and sturdy enough to take a bit of a pounding when you need to do some serious typing or number-crunching.

The Universal Foldable keyboard is a bit of an oddity – and not only because it actually looks pretty great. It’s a standalone Bluetooth keyboard that will connect to any device that works with Bluetooth, including Macs and PCs as well as smartphones and tablets.

But, as the name suggests, you can fold it in half so that it’s really small and light when you need to carry it around with you. And when you need to do some work you can just unfold it again and start tapping away.

Despite being a Microsoft product, it even remembers to provide good support for iOS devices, and even has a Mac Command key so that you can switch between apps and use other familiar Mac shortcuts.

The keyboard is covered with tough fabric to keep it safe, along with a water-resistant coating to protect it from the great outdoors (or, more likely, clumsy spills). The keyboard can pair with two separate devices, and allows you to switch between them whenever you want, and the rechargeable battery should last for up to three months between charges.

Arteck Backlit Keyboard – So many colours! 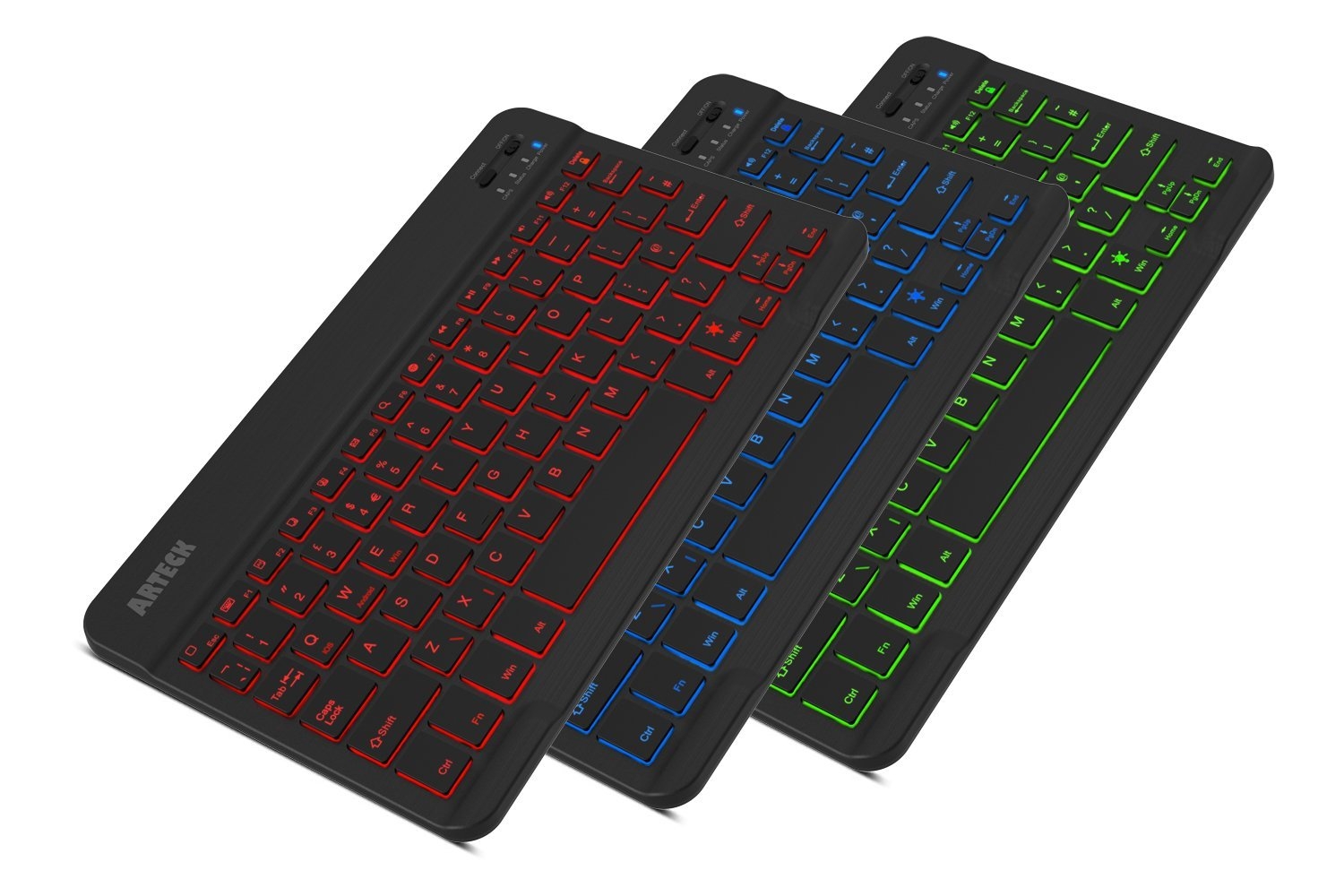 Perhaps the most vibrant option of the lot, Arteck’s Bluetooth keyboard offers seven colours in its backlight gamut, which are also adjustable to two brightness levels.

The rechargeable lithium-ion battery should last you six months between charges, though this is if you use the keyboard for two hours day and without the back-light.

The Arteck keyboard works with all iPads, thank to the Bluetooth connection. It is also compatible with iOS, Android and Windows.

This keyboard comes with a two-year warranty.