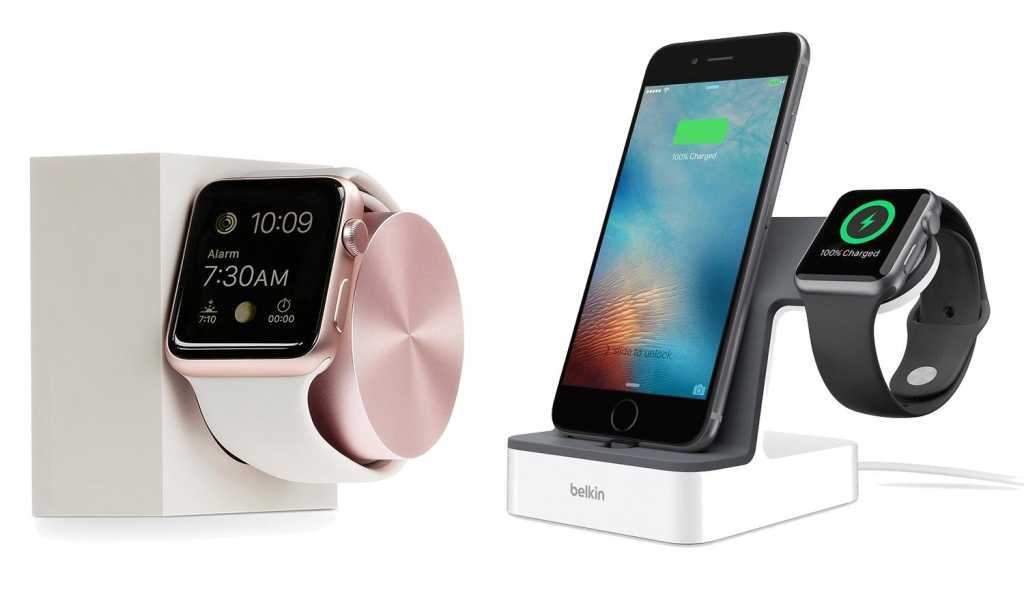 Apple’s never been terribly generous with the accessories that it supplies with its products, and we reckon that the elegant design of the  Apple Watch deserves something a bit smarter than the plain white charging cable that comes in the box.

Fortunately, there’s a wide range of stylish and practical charging stands and docks for your Apple Watch – along with versions that support multiple Apple devices like the iPhone, AirPods and Apple Pencil.

Here, we round up some of the best Apple Watch docks and charging stands around. Most should be compatible with all generations of the Watch (Series 1 to 6 and Watch SE), but be sure to check compatibility before buying.

Lewis Painter and Simon Jary contributed to this article. 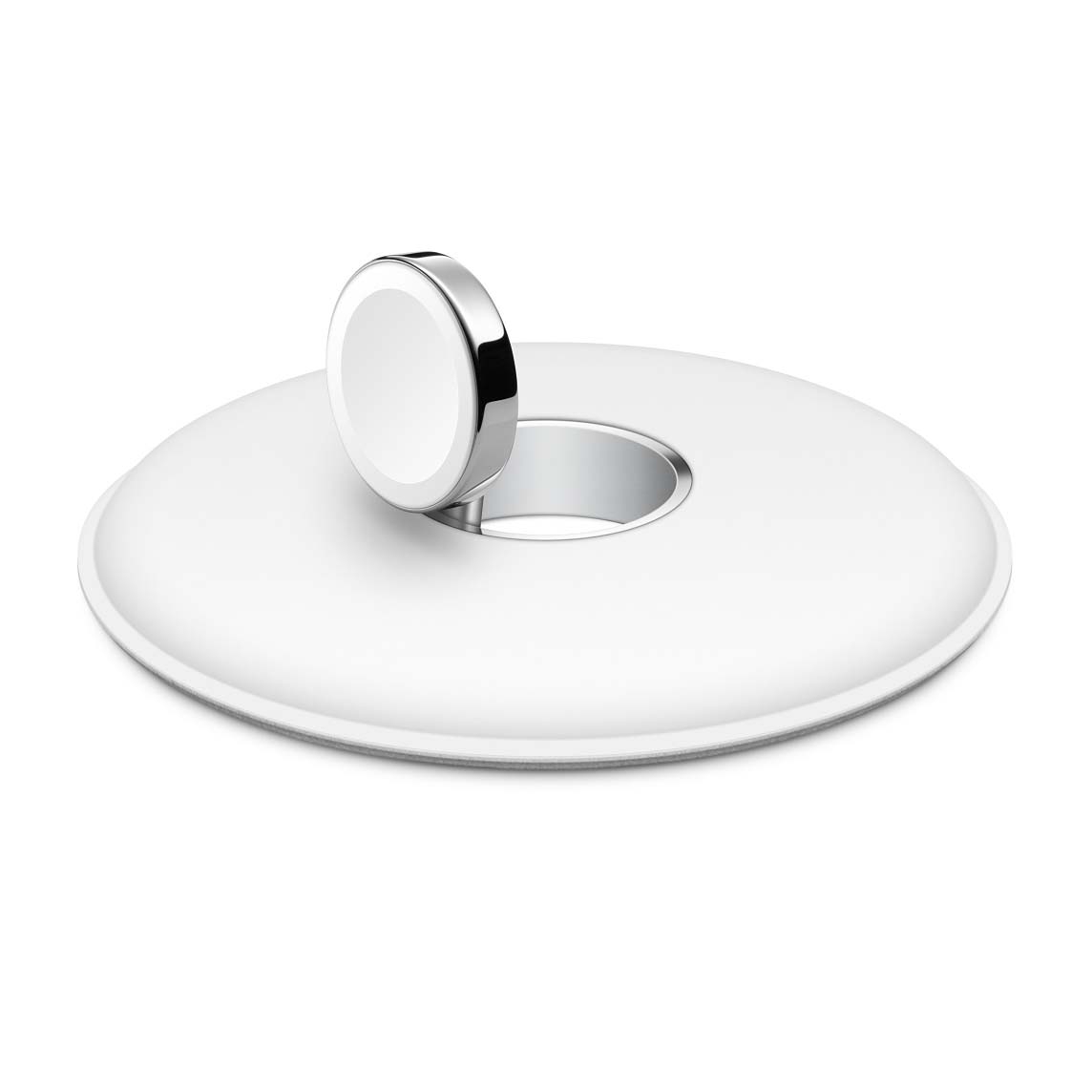 The 5W Magnetic Charging Dock is a typically smart piece of Apple design, looking like a little silver-and-white flying saucer. Right in the centre of the disk is a magnetic connector that holds the Watch in place while it’s charging, and is designed to work with both 38mm and 42mm versions of the Watch.

This connector can switch between flat and upright positions, so if you come home and need a quick top-up you can just slip the Watch off and lay it flat on the charger, and then grab it again when you’re ready to go out. At night, you can lift the charge connector up and wrap the strap around it, so that the Watch lies on its side. That will automatically tell the Watch to go into its special Nightstand mode so that it can act as an alarm clock while it’s charging overnight.

The design is neat and efficient, but doesn’t do a lot to justify its hefty price tag. There’s plenty of interesting competition from the many rival docks and chargers that we’ve rounded up here. 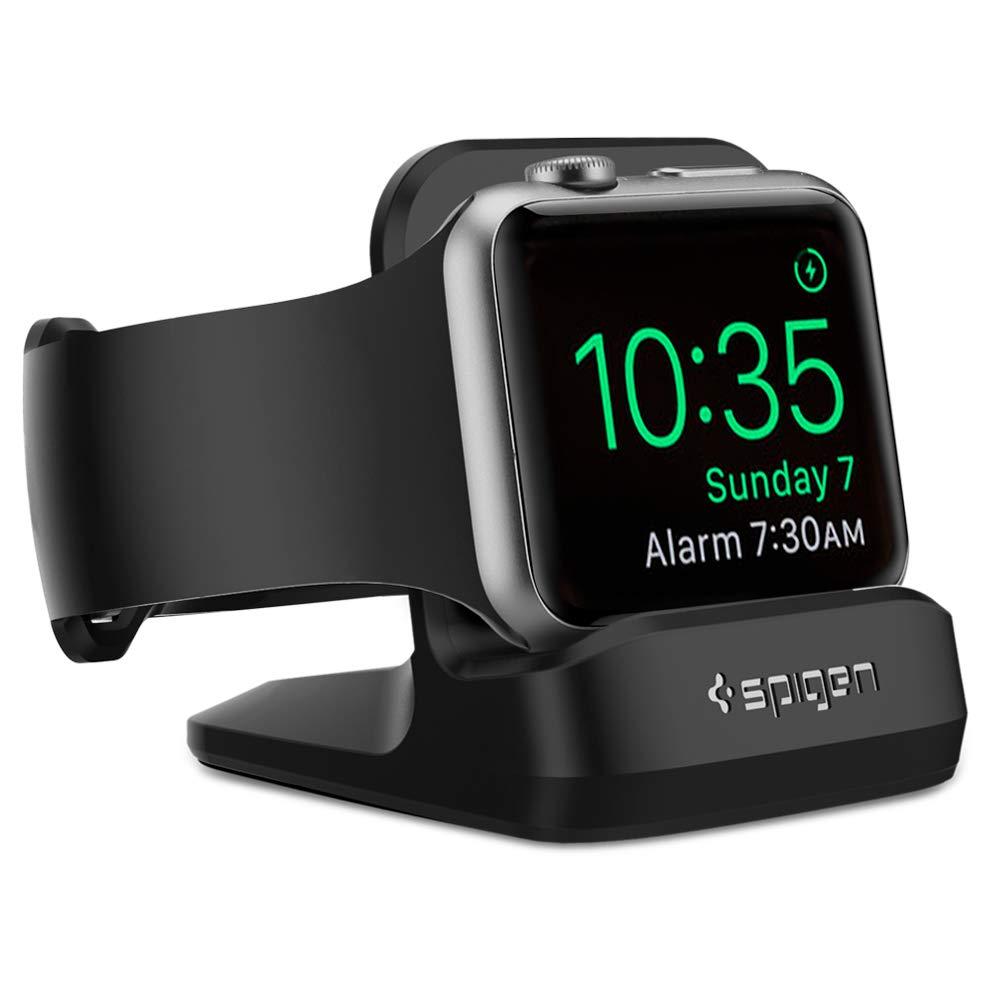 Spigen is a trusted brand that we’ve recommended in many of our cases round-ups before, so we’re glad to see it create stands for the Watch. You won’t get the sleek aluminium finish of some of the other more expensive stands but it’s hard to complain when it just costs a tenner.

The S350 is compatible with Watch Series 1-6 and Watch SE. 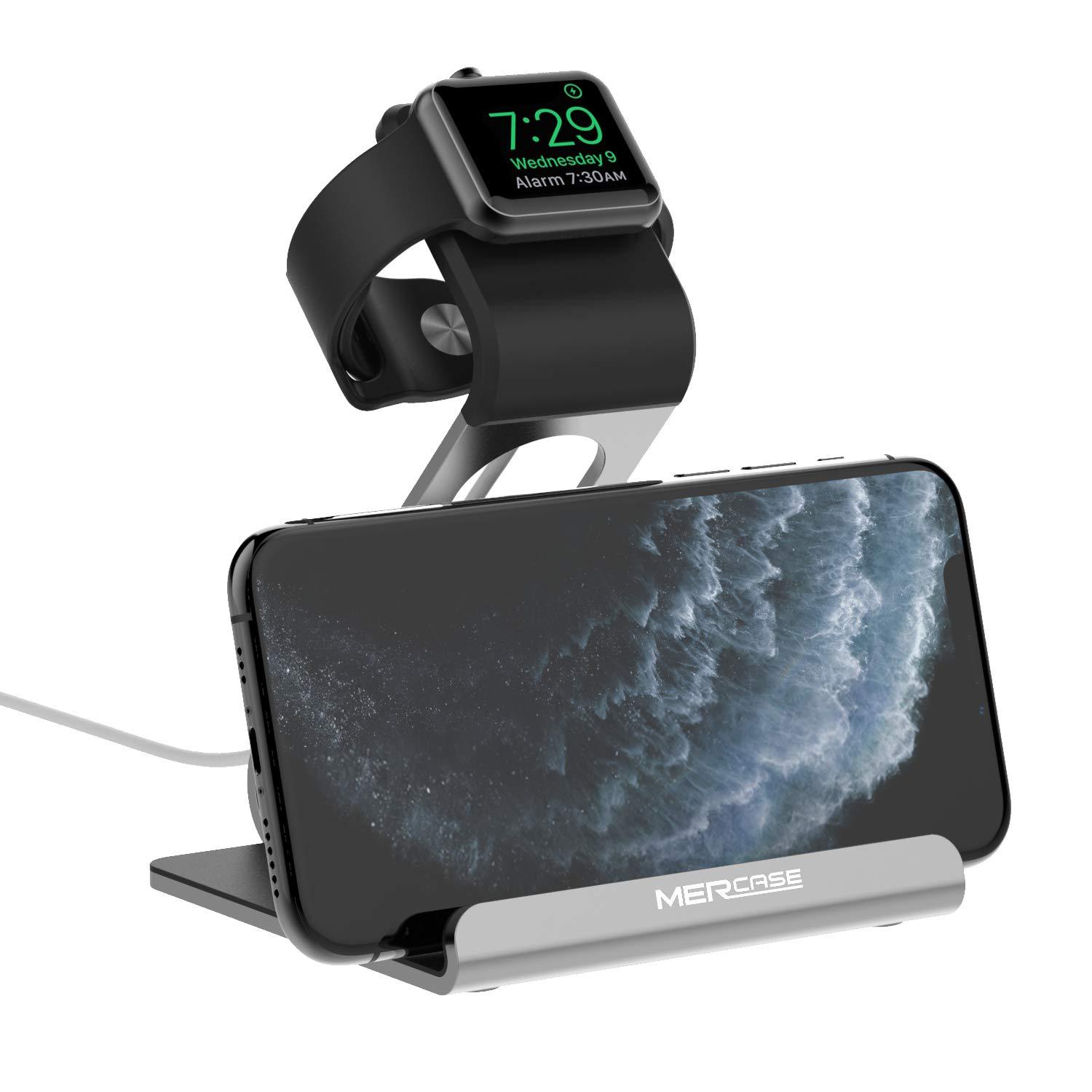 Mercase’s charging stand lets you juice up both your Apple Watch (Series 1-6 and SE) and iPhone (8 tp 11 Pro Max) simultaneously. In fact, the bracket for the phone can even accommodate an iPad up to 10.5in in size if you’d prefer to charge one of those instead.

It’s made of aluminum and features rubber feet to keep it sturdy on a surface. 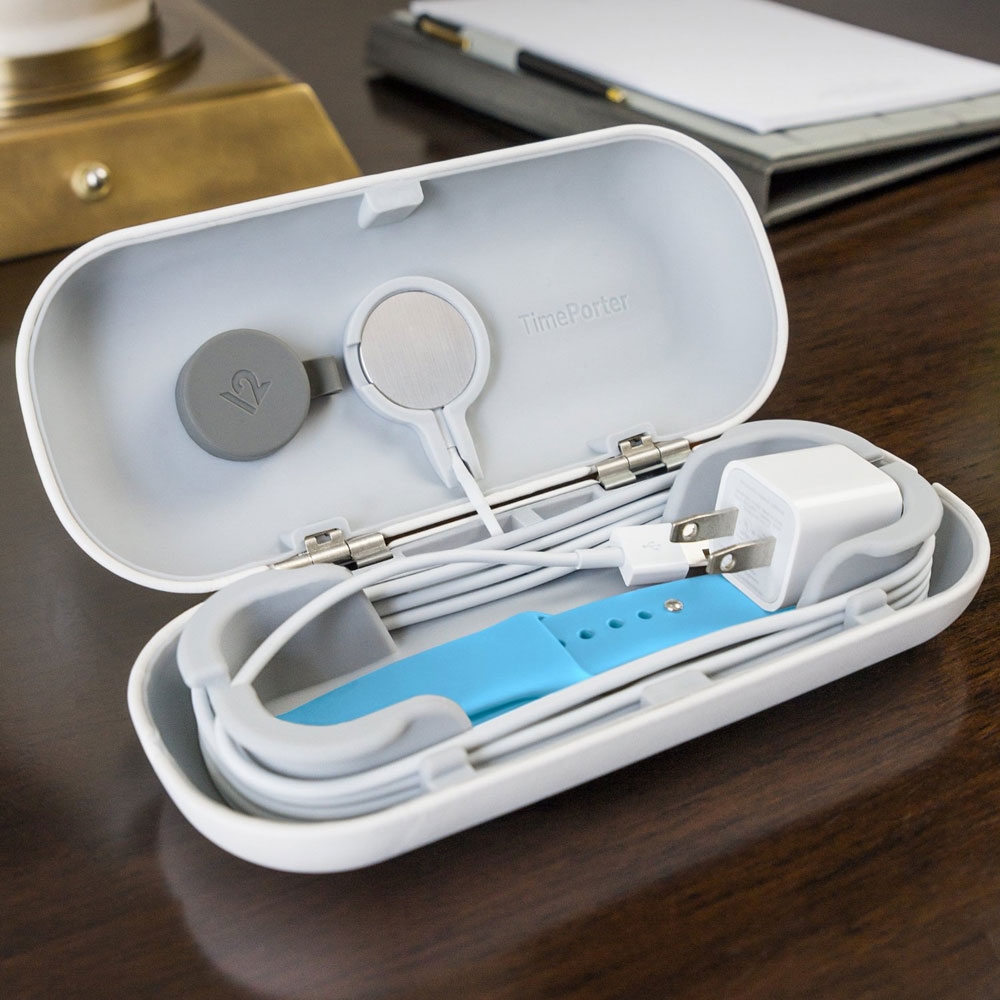 The TimePorter from Twelve South is a cool little case for storing and charging your Apple Watch whether at home or on the go.

Using the Apple Watch charging disc that comes with the Watch, you clip the cable into the case where you can store the plug, extra straps and other accessories. This is great as it tidies everything away; having the Watch and all its bits charging on your nightstand can otherwise be a cable-twisted nightmare.

Your Watch attaches to the charging disk on the outside, and if you lift the lid it acts as a stand in a viewing position like an alarm clock. You can pack everything away and chuck it in a bag, too. 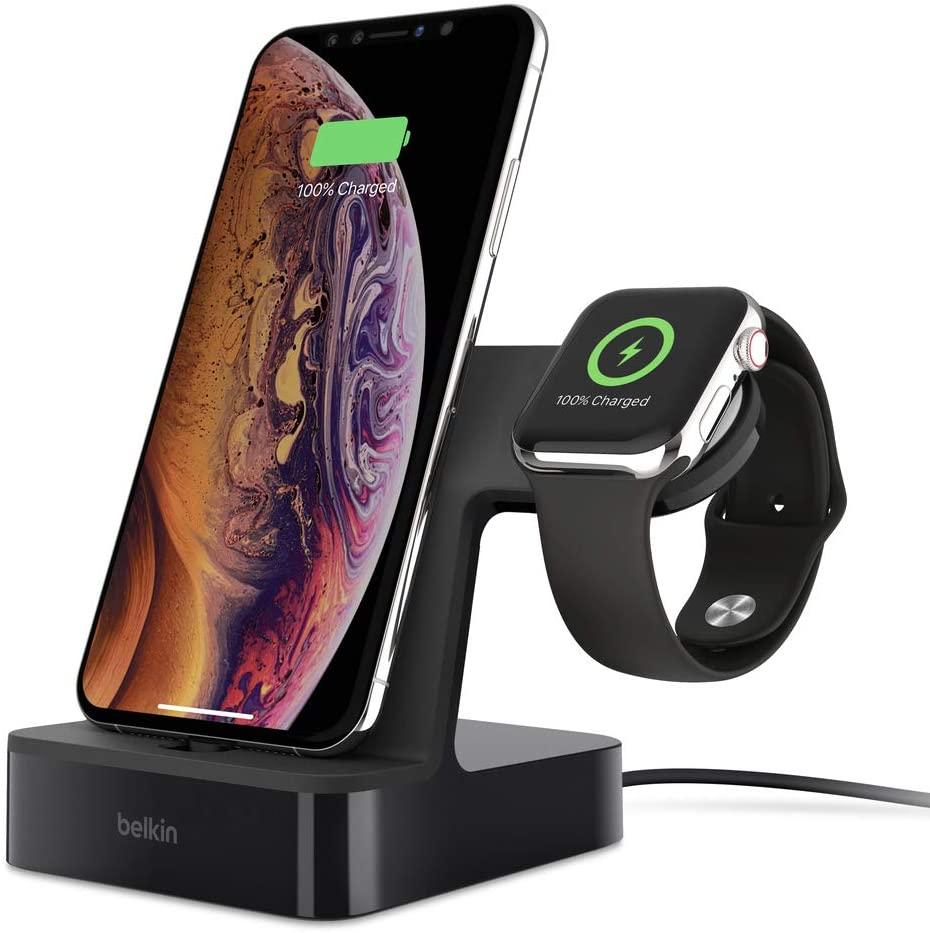 It’s probably safe to assume that anyone who owns an Apple Watch also has an iPhone as well, so it might be worth looking at a two-in-one dock such as Belkin PowerHouse, that will allow you to charge them both at the same time. The PowerHouse is compatible with all iPhone models and Watch Series 1-6 and Watch SE.

It’s an upgrade to Belkin’s Valet Dock which is now outdated (and grossly overpriced!)

The PowerHouse has a rectangular base with a power cable at the back, and a Lightning connector that can be used to charge an iPhone 5 or later. The induction charger for the Watch extends out from the iPhone stand.

The charger also has magnets built-in, which grab the Watch and hold it in place.

It’s a bit pricey, but we like the space-saving convenience of the PowerHouse, and it does have some nice extra touches, such as the ability to adjust the height of the Lightning connector so that you can charge your iPhone while it’s still in a protective case.

Belkin also has a version where both the iPhone and Apple Watch charge wirelessly (up to 7.5W charging). 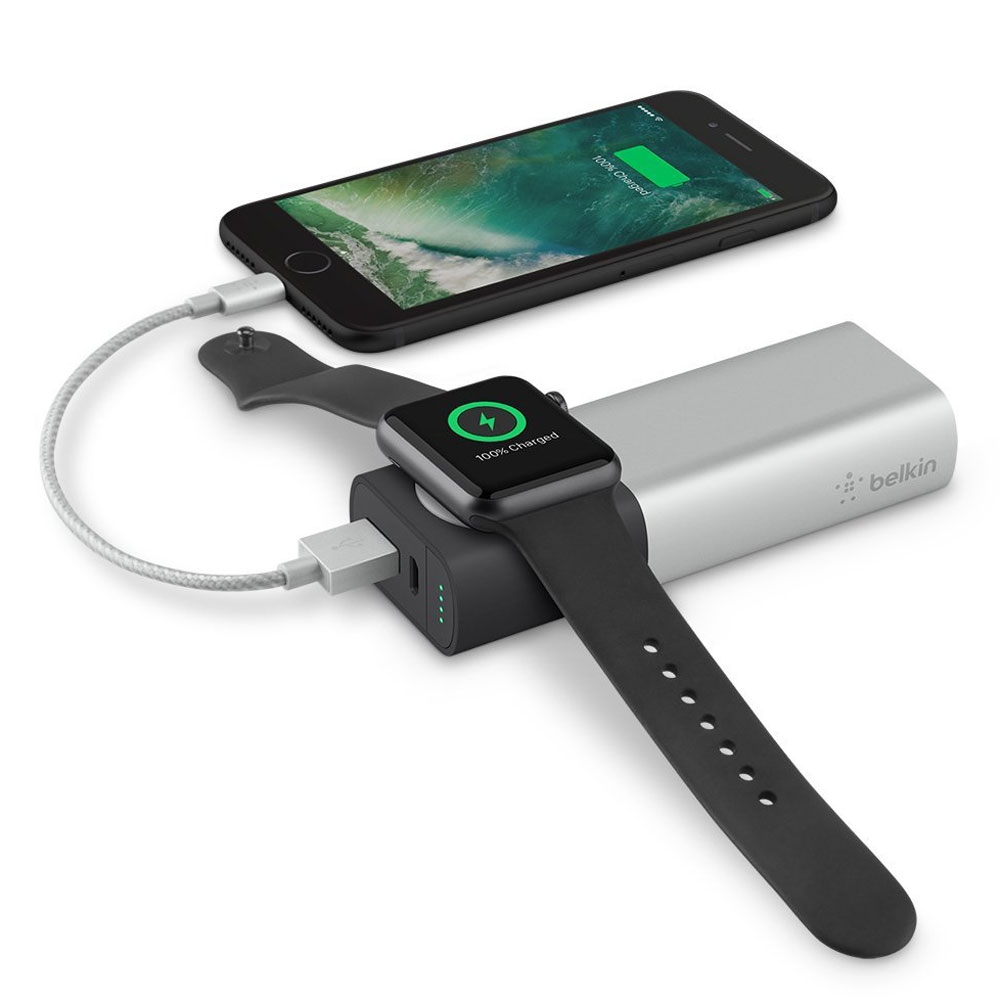 This is a pricey but worthy addition to the list if you’re out and about.

This power pack is a proper charger, and even better than that it is rechargeable. With 6700mAh of power when full, Belkin claims it can charge an Apple Watch eight times. 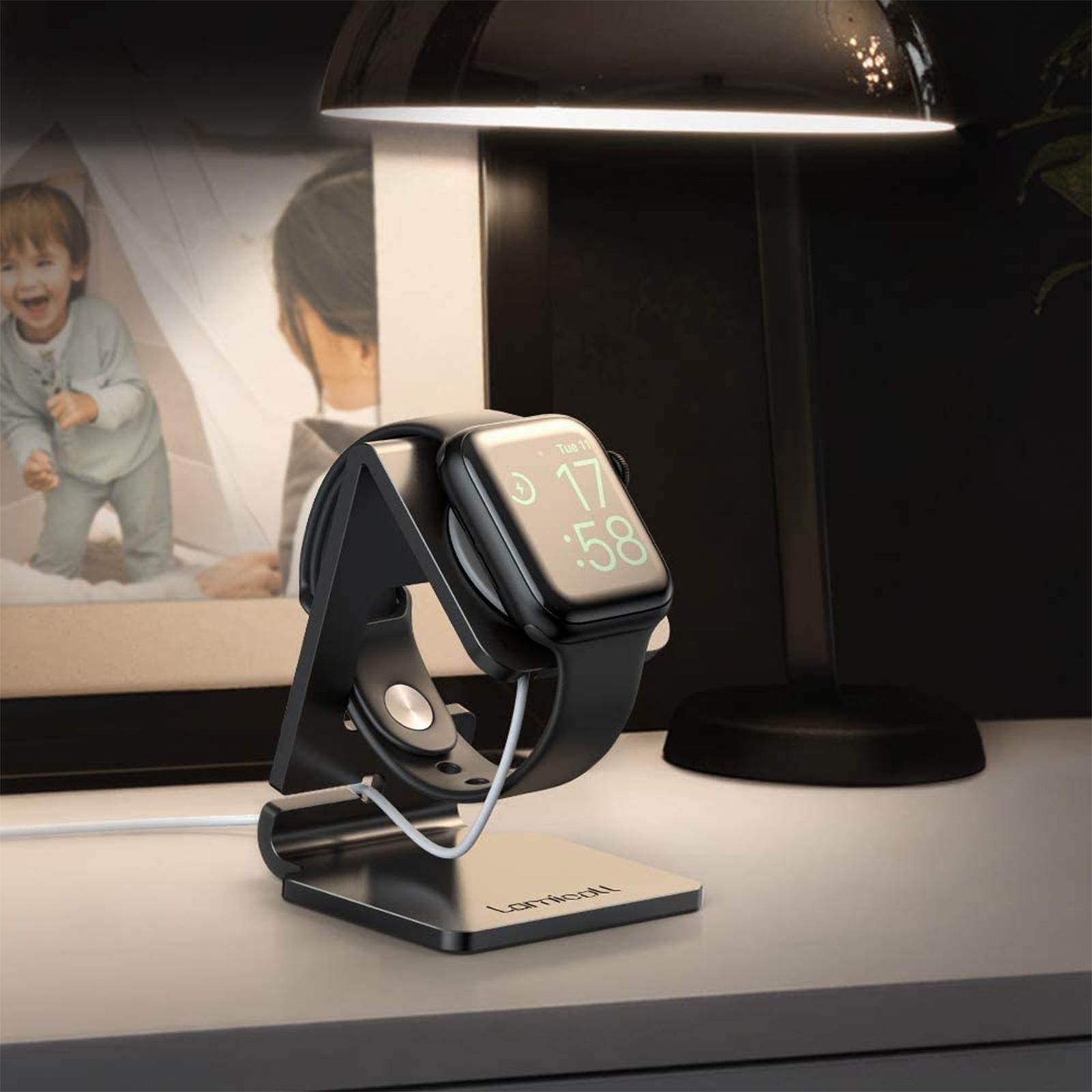 Lamicall’s Apple Watch Stand is a super affordable wired option at under a tenner. It works with Apple Watch 1-6 and SE

It may be cheap, but it certainly doesn’t look tacky with an aluminum alloy body. Keep in mind you will still need to use a separate charging cable as this is only a stand and won’t actually charge your Apple Watch.

Still, it’s a nifty little bedside stand if you don’t want to splurge more than you need to. 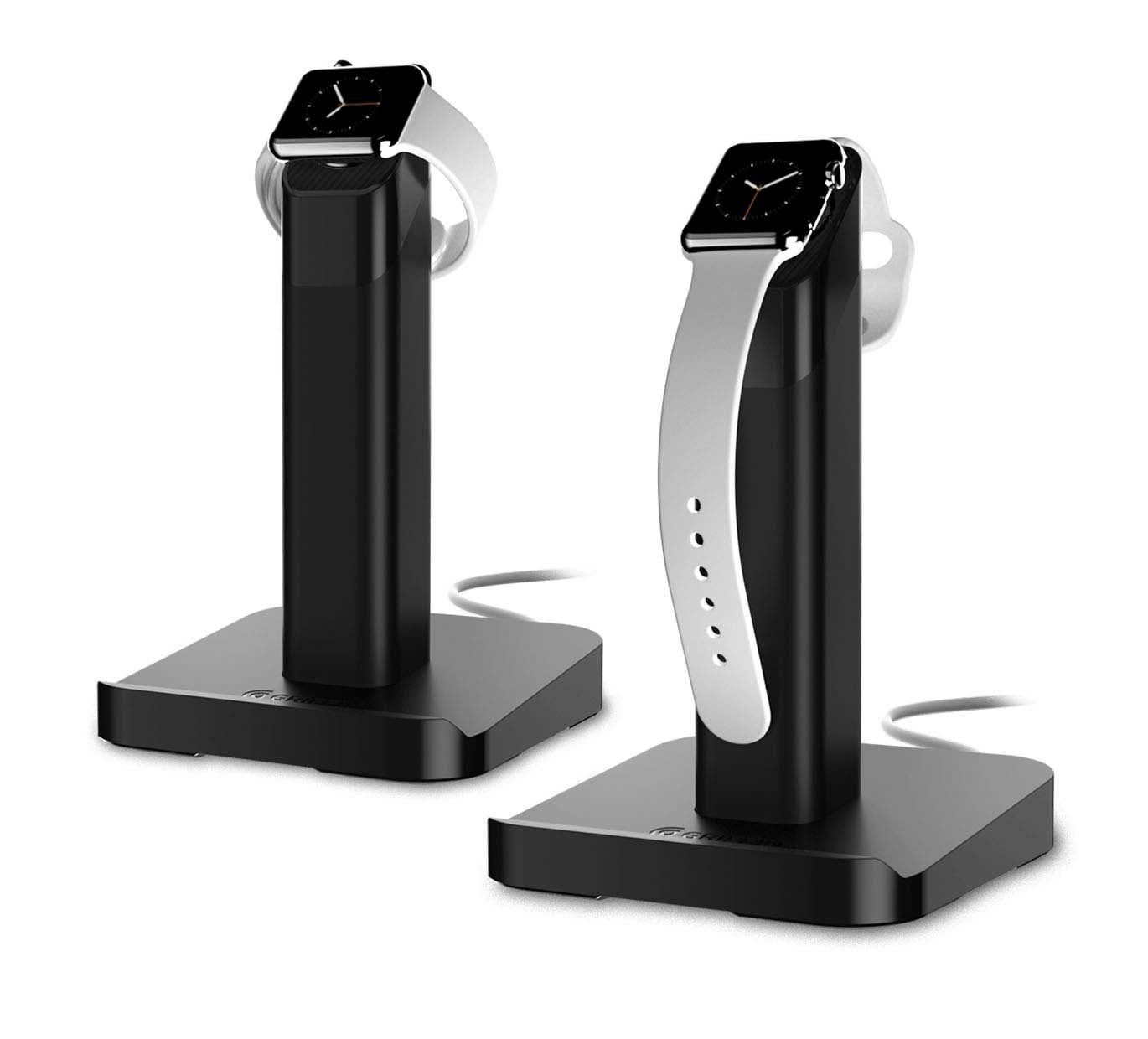 If you’re looking for charging dock that doesn’t cost a fortune, then Griffin’s WatchStand will fit the bill. It has a simple pedestal design that allows you to rest your Apple Watch on the top of a thin plastic column that stands almost eight inches tall on your desk.

You can place your Watch either upright with the strap open, or sideways so that you can use Nightstand mode when charging it up overnight (although sideways will be your only option if your Watch has a closed-loop strap).

The height of the WatchStand does make it look a bit bulky, but that’s partly because the pedestal column is designed so that you can wrap longer cables around the inner core of the column to reduce clutter. The mostly plastic construction has something of a cheap and cheerful feel about it too, but you can’t really expect the gleaming chrome or aluminium of more expensive rivals at this sort of price.

The base of the WatchStand angles slightly upwards and has a protruding lip on the front edge that allows you to rest an iPhone there if you want to charge the two devices together. 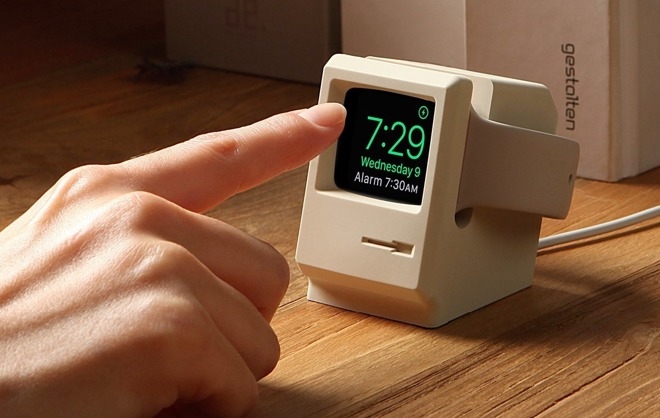 Here’s one for the Apple enthusiasts that have been following the company since long before all this fancy touch-screen malarkey started. Elago’s W3 Stand (a.k.a. the Apple Watch Vintage Stand) turns your Apple Watch into a teeny tiny original Macintosh while it’s charging.

It even sits at a slight angle to match the original Mac, and uses Nightstand mode to make sure the screen is aligned correctly.