3D Touch, which made its debut in the iPhone 6s , is a brilliant but underappreciated piece of screen technology.

In this article we explain how to use 3D Touch, and round up the most useful 3D Touch-enabled tricks, tips, shortcuts and new features.

What is 3D Touch?

The 3D Touch interface is based upon the Force Touch technology that Apple previously introduced in the MacBook and Apple Watch (under the name Force Touch), and owners of either of these devices will have a head start here. Essentially, the function performed depends on how hard you push the screen, but whereas your watch can distinguish between two degrees of pressure – a standard tap and a harder Force Tap – the 3D Touch-equipped iPhones offer three.

Most people instinctively know the gestures they use with an iPhone: tap, swipe and pinch are just some of the commonly used interactions. 3D Touch introduces two new standard gestures – Peek and Pop, which we explain below – and a wide range of quick shortcuts and additional interface options.

3D Touch’s features are available to all developers, which means they cab create apps that take advantage of the pressure-sensitive screen. A developer of a drawing app can use 3D Touch to change the brush strength, for instance, depending on the firmness of your finger press.

Which iPhones get 3D Touch?

All the 4.7in and larger iPhones from the 6s onwards. Which means all the phones Apple currently sells, except the SE.

3D Touch will be activated by default on any new iPhone (except the SE), but you can fiddle with a few settings or even turn it off (madness!) by going to Settings > General > Accessibility, swiping down and tapping 3D Touch. Then adjust your sensitivity. 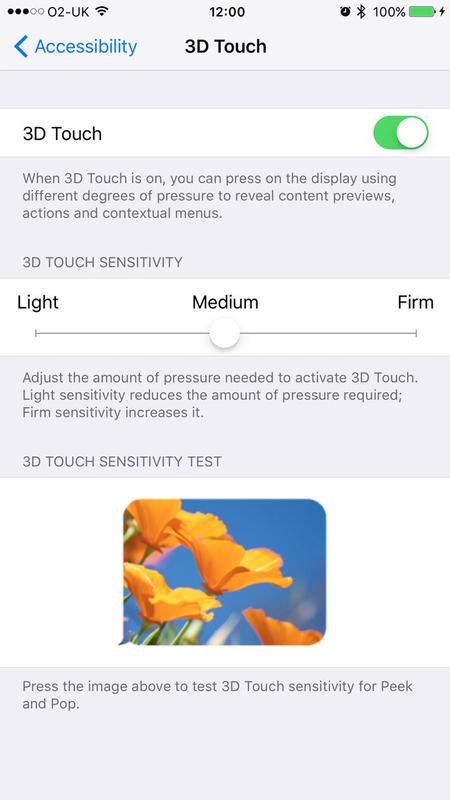