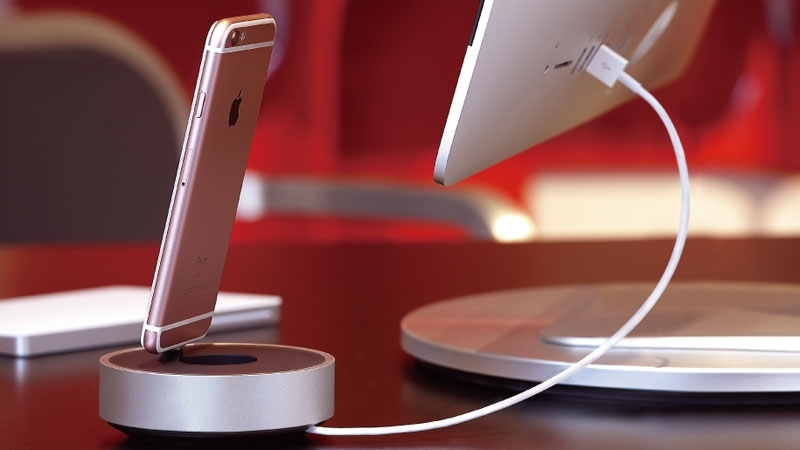 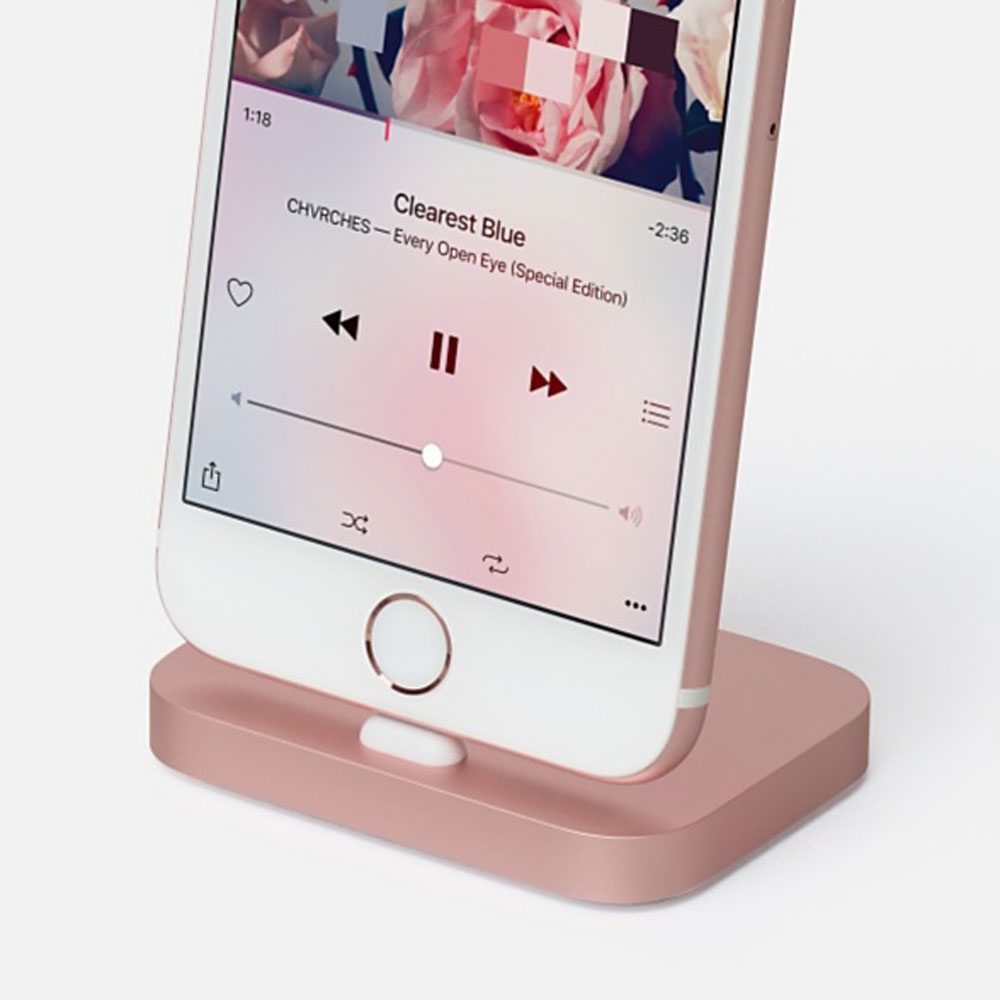 Where else to begin than with Apple’s own offering? Premium price does bring with it a choice of four colours, so if you went with the rose gold iPhone, hey, you can match it to this dock. It works with iPhone 5 and later.

Connect it to the mains and it will charge, but connect it to your PC or Mac and it’ll sync with iTunes. Be warned though, despite the price this dock does not come with a USB cable, so be prepared to use the one that came with your phone, or fork out for another.

You can see our run down of the best Lightning cables here. And read up on the best hybrid charging docks, which can charge an Apple Watch and an iPhone (and occasionally an iPad) at the same time. 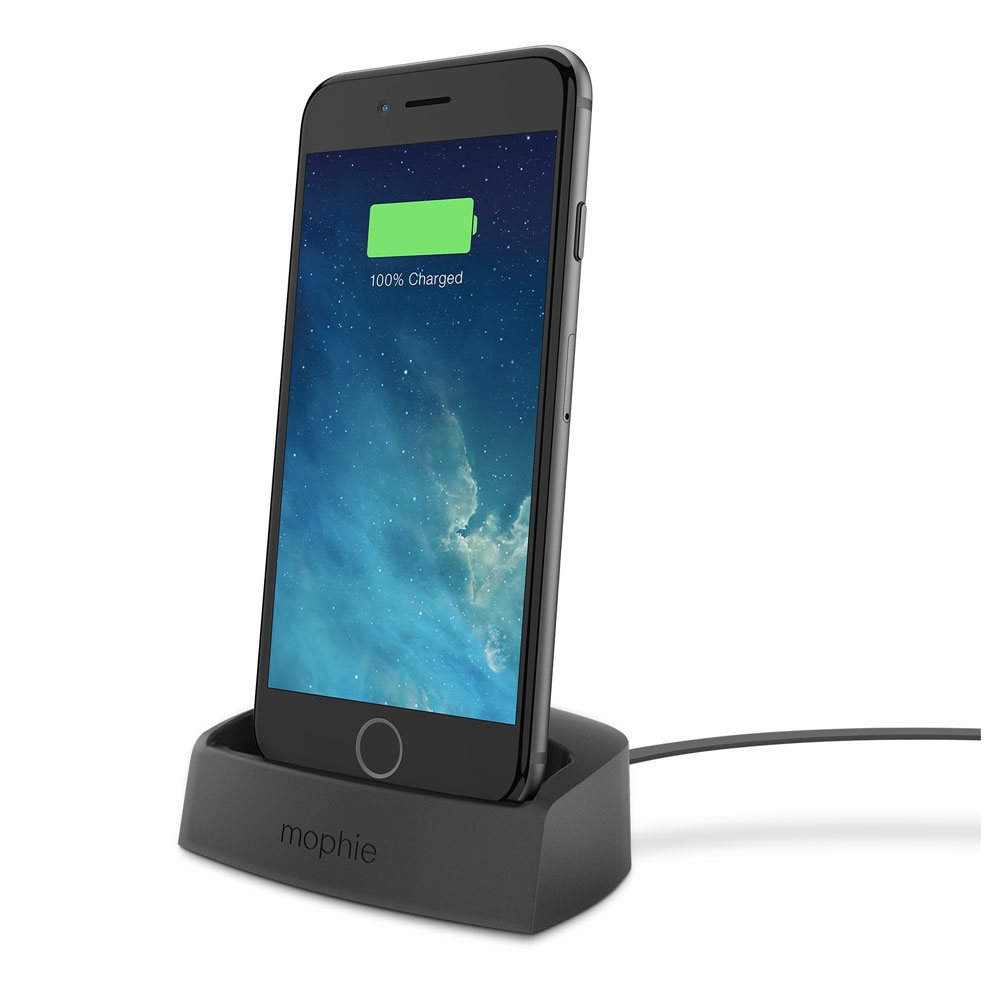 This dock used to be even more expensive than Apple’s, but now it’s about a third of the cost (though it’s only available in the UK now).

It has a pivoting Lightning connector to allow leeway if you have a case on, though confusingly this dock is not compatible with Mophie’s own cases. If you are looking to charge with a Mophie case though, you will want to look at the similar Juice Pack dock (available in the UK for the iPhone 6/6s, and  6 Plus models, and in the US for iPhone 5/5s/5c and SE models and  6s models).

This dock though is nicely designed and a solid hunk of product, so it won’t move around on your desk. 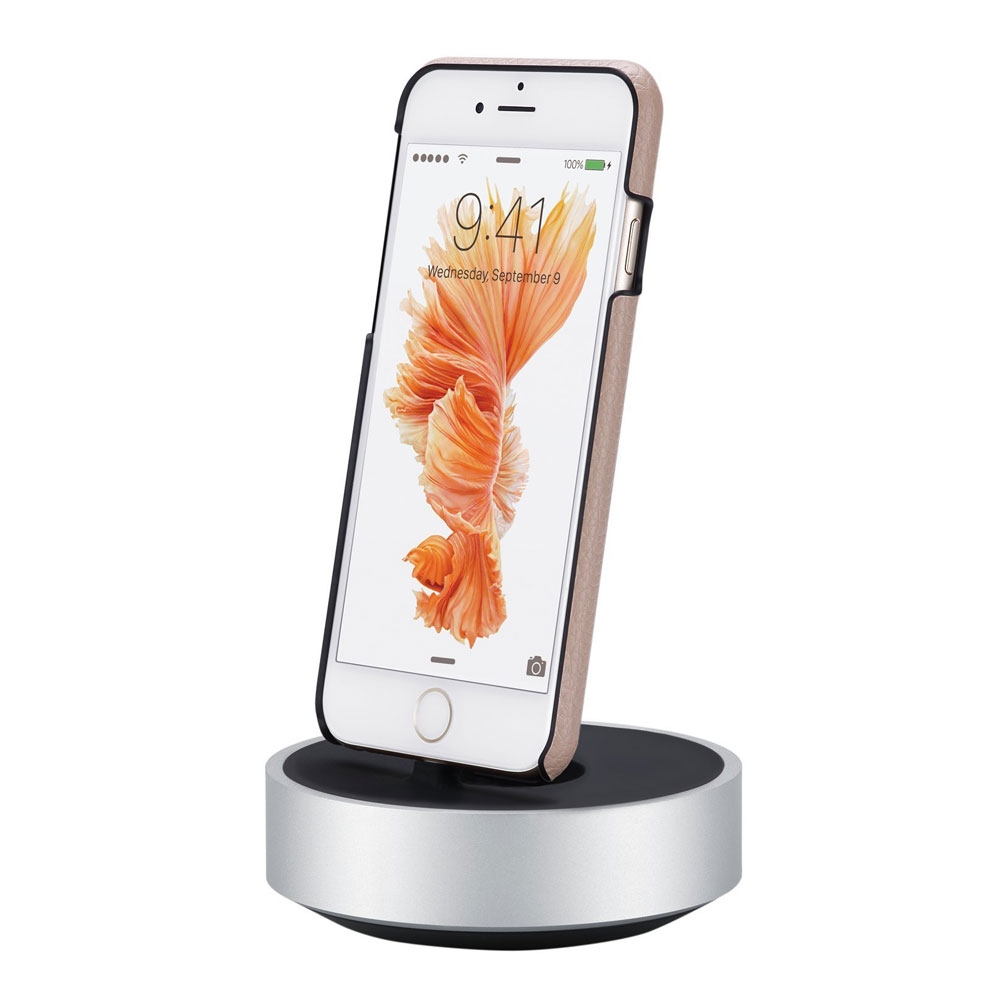 The Hover Dock by Just Mobile is a sleek, understated choice of a dock. As your iPhone hovers with this set up and doesn’t sit flush with the dock, it means it’ll work with most cases provided they’re not too bulky, but check the dimensions first. It comes with an elevator clip that raises the cable higher still by 4mm.

It works by feeding your Apple to Lightning USB cable up through the base of the dock to poke out the top in order to place your iPhone on.

Just Mobile recommends using Apple’s branded cable, and you can use the circular base of the Hover Dock to wind up the cable for handy, neat transport, but also to shorten the length of the cable if the dock is near to the plug or USB port of your computer. It’s a smart solution to your docking woes. 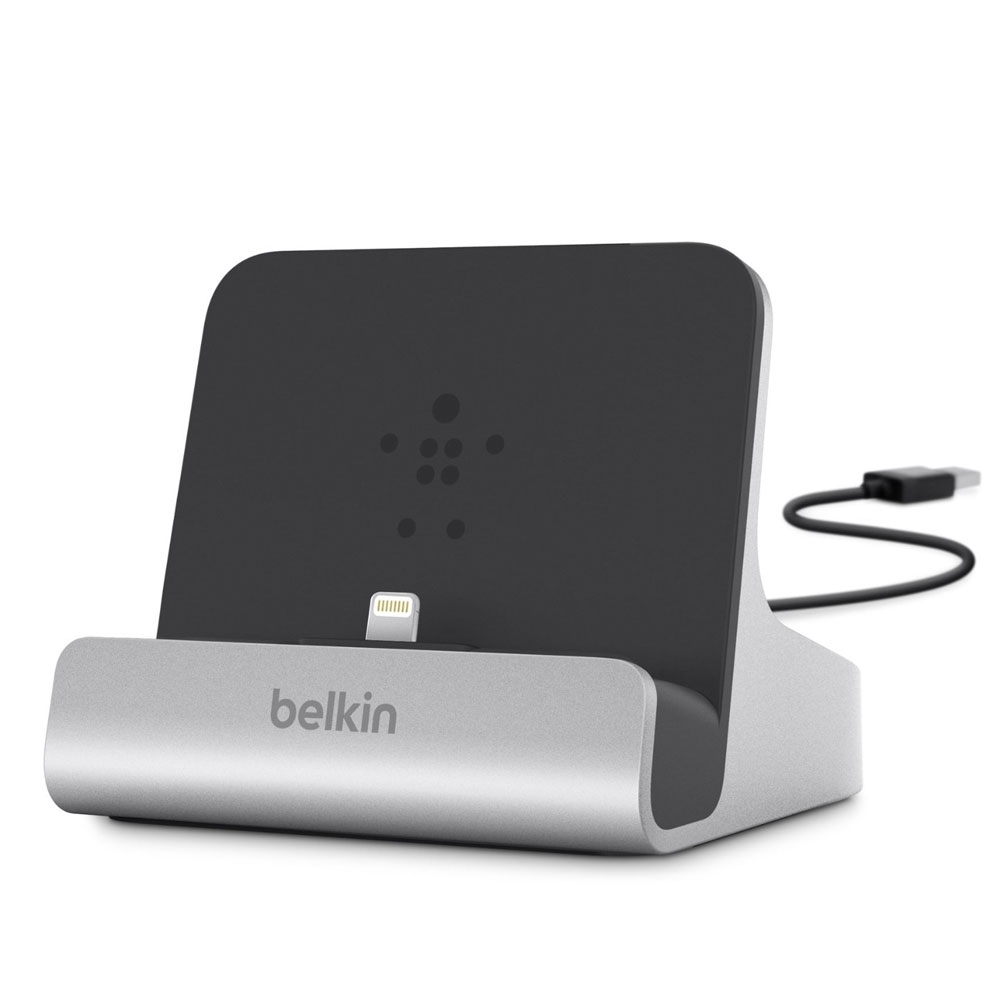 Belkin is a tried and tested brand with excellent accessories for a number of devices. It’s no different when it comes to its Charge + Sync Dock for iPhone. A smart, tidy design, the dock has an attached 1.2m USB cable for connecting to a wall plug or computer for charging and syncing.

Its slim design lends itself to carrying around in a bag and will look great on any bedside table or work station. It will work with any Lightning compatible iPhone. 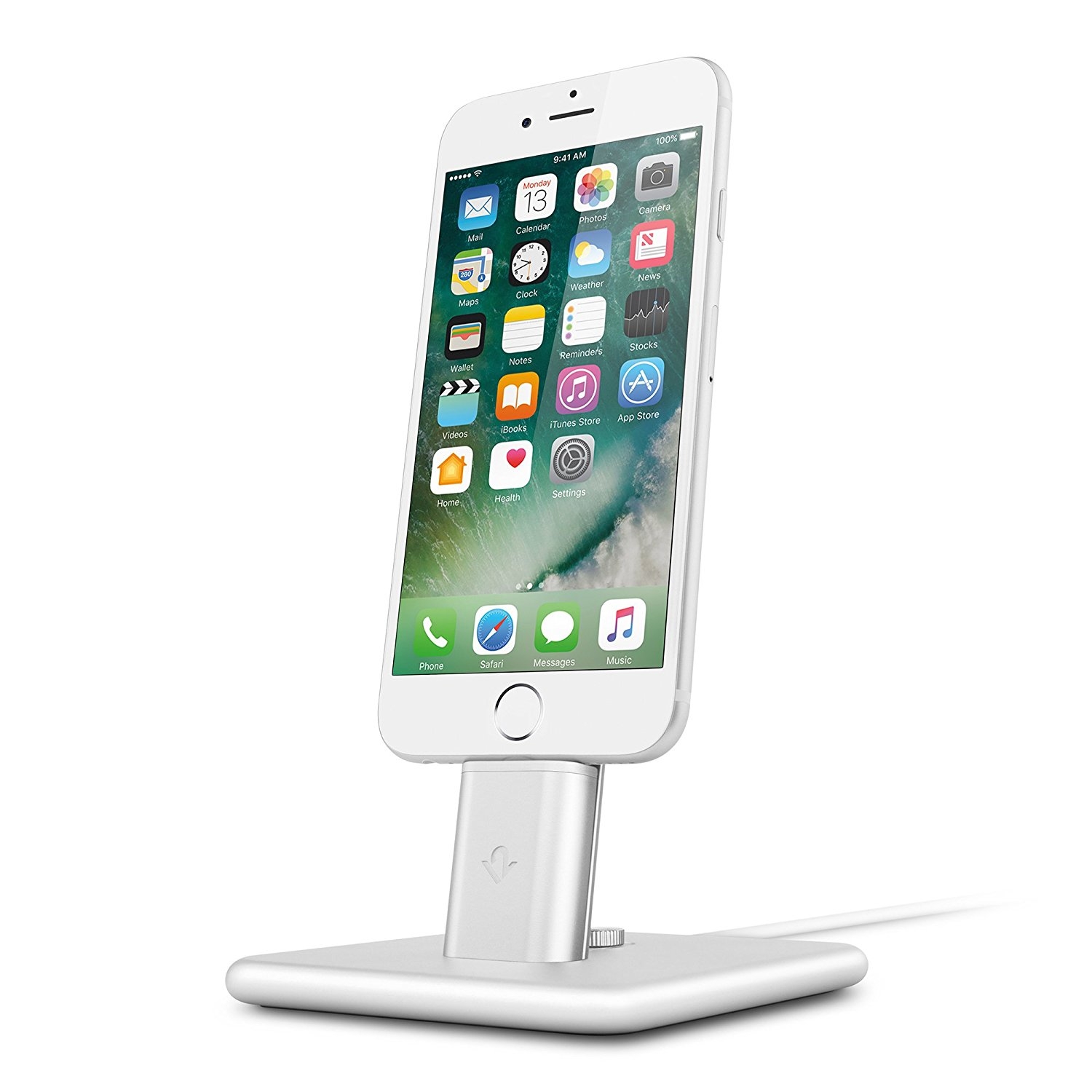 Another attractive design from Twelve South, the company behind the popular BookBook leather cases for iPhone and iPad.

The HiRise 2’s elegant design is also highly functional, as it works with every single iPhone and iPad (except the 12.9in iPad Pro). It also works with the Apple TV Siri Remote, Magic Keyboard, and Trackpad with a Lightning port. That’s a lot of products.

It doesn’t come with the Lightning cable, but we’re able to forgive this for its sleek design – that’s also slightly smaller, yet twice as heavy as its predecessor, the HiRise, which means it’s sure to stay put. There is also the Deluxe version. 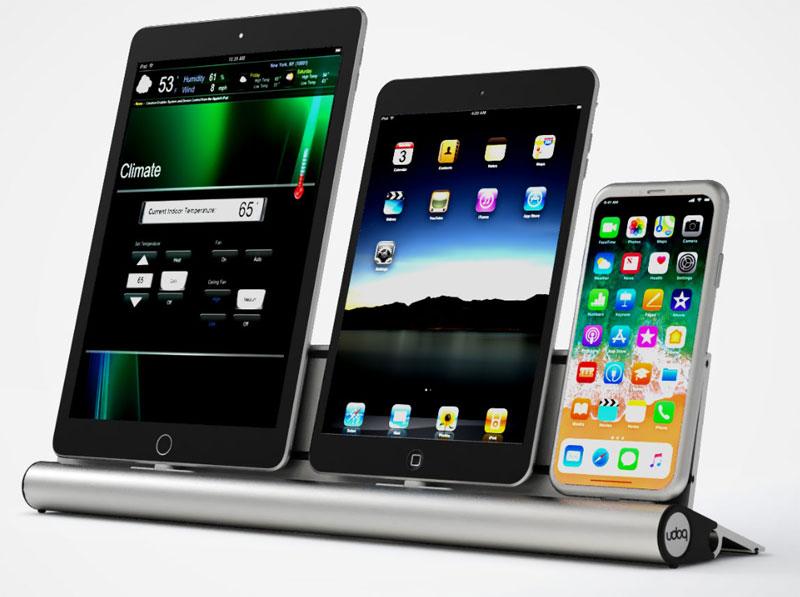 Most households have more than one device that requires charging – even if you live alone, you might have both an iPhone and an iPad, for example. Multi-person households multiple this considerably. And everyone wants to charge at the same time, either at the end of the day when the phones are low on juice, or desperately at the start of a long day and a depressingly low battery-charge indicator.

The Udoq is an all-in-one universal charger and docking station that comes in four different sizes, charging say just an iPhone and iPad or up to five different devices. Devices can remain in their cases.

The chosen connector cables are inserted from the side, and positioned in your desired order, and can be swapped for new adapters as you require them. No more hunting for that second Lightning cable that somehow made it to another room.

And they don’t have to all be Apple, as you can customise with various connectors: Lightning, MicroUSB, USB-C, 30-pin iPod, Apple Watch and QI wireless pads.

The aluminium Udoq looks the part with the rest of your Apple kit, and is a super-tidy alternative to straggling wires and arguments about whose device needs charging the most at the end of the day. 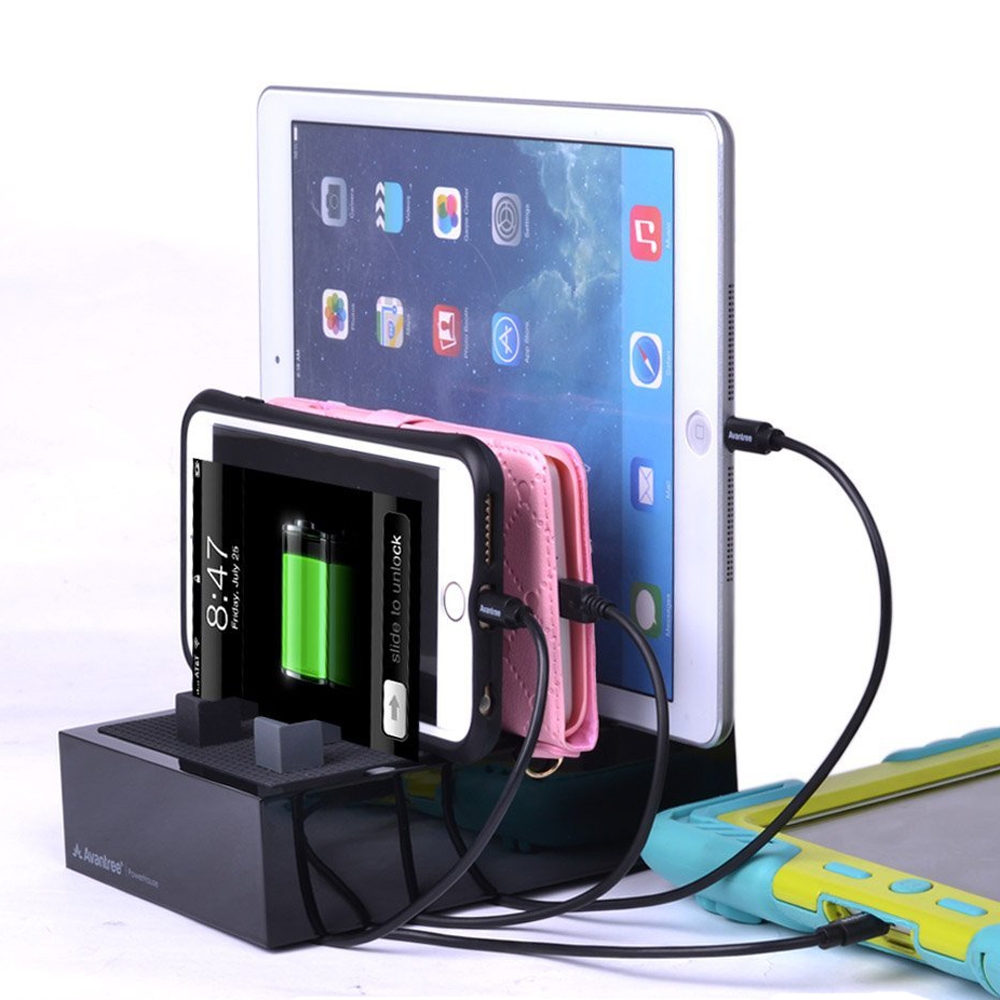 Avantree’s multi-USB charging dock lets you charge up to four devices at once. With 8-amps of power, you can expect your iPhone to charge quite quickly if you’re only charging one device at a time. Otherwise, this dock splits the power between each port to 2.4amps per port.

The surface is made of silicone and has separator blocks which you can remove and adjust to suit the placement and thickness of your devices. This dock comes with a 1.5-metre long power cable and 2 micro USB cables, so you’ll need to buy extra Lightning cables for your Apple devices.

You also get a 2-year warranty on this dock.