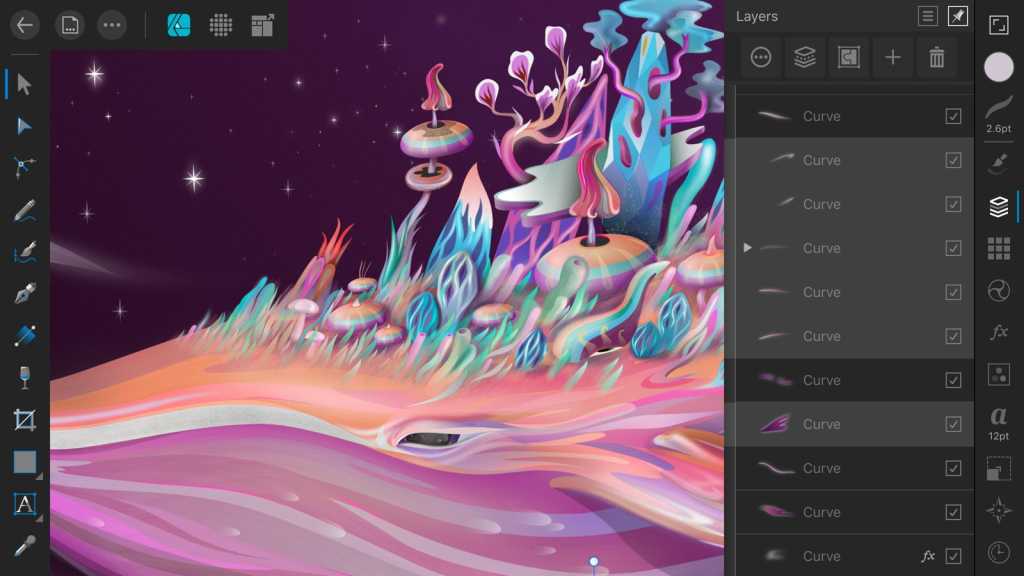 With the iPad Pro, Apple took the iPad experience we’ve come to know and love from the consumer space and planted it firmly at the feet of business workers and creative professionals. Teamed up with a Smart Keyboard and Apple Pencil, the iPad Pro is an exceptional work tool.

Partly this is due to the exceptional hardware, and partly it’s thanks to the ultra-lightweight iOS operating system. Apple’s hardware and software ethos make a formidable tool that’s light enough to hold like a notepad, and creatively powerful.

Of course, all of this also depends on your choice of software to go with the hardware. In this article we round up some of the most incredible business, productivity and creative apps available for the iPad Pro.

You can take a look at the iPad Pro on the Apple Store, or browse our roundup of the best iPad deals. 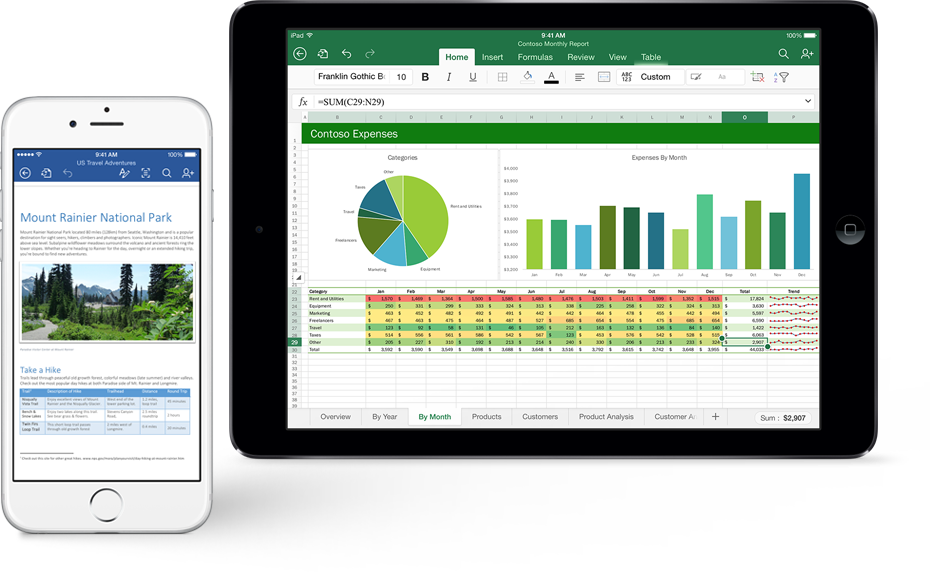 It’s to Microsoft’s credit that it bit the bullet and threw itself wholeheartedly into developing its Office suite for iOS. Microsoft Word and Excel don’t get enough credit among iOS users; these are exceptional tools with desktop-class strength.

Those working with Excel spreadsheets will value the ability to edit, create and manage documents without having to transfer them through third-party apps.

Microsoft’s apps are slick, too, but it’s a shame you have to have a Microsoft Office 365 subscription to use them on the iPad Pro. Regular iPad devices are still free. 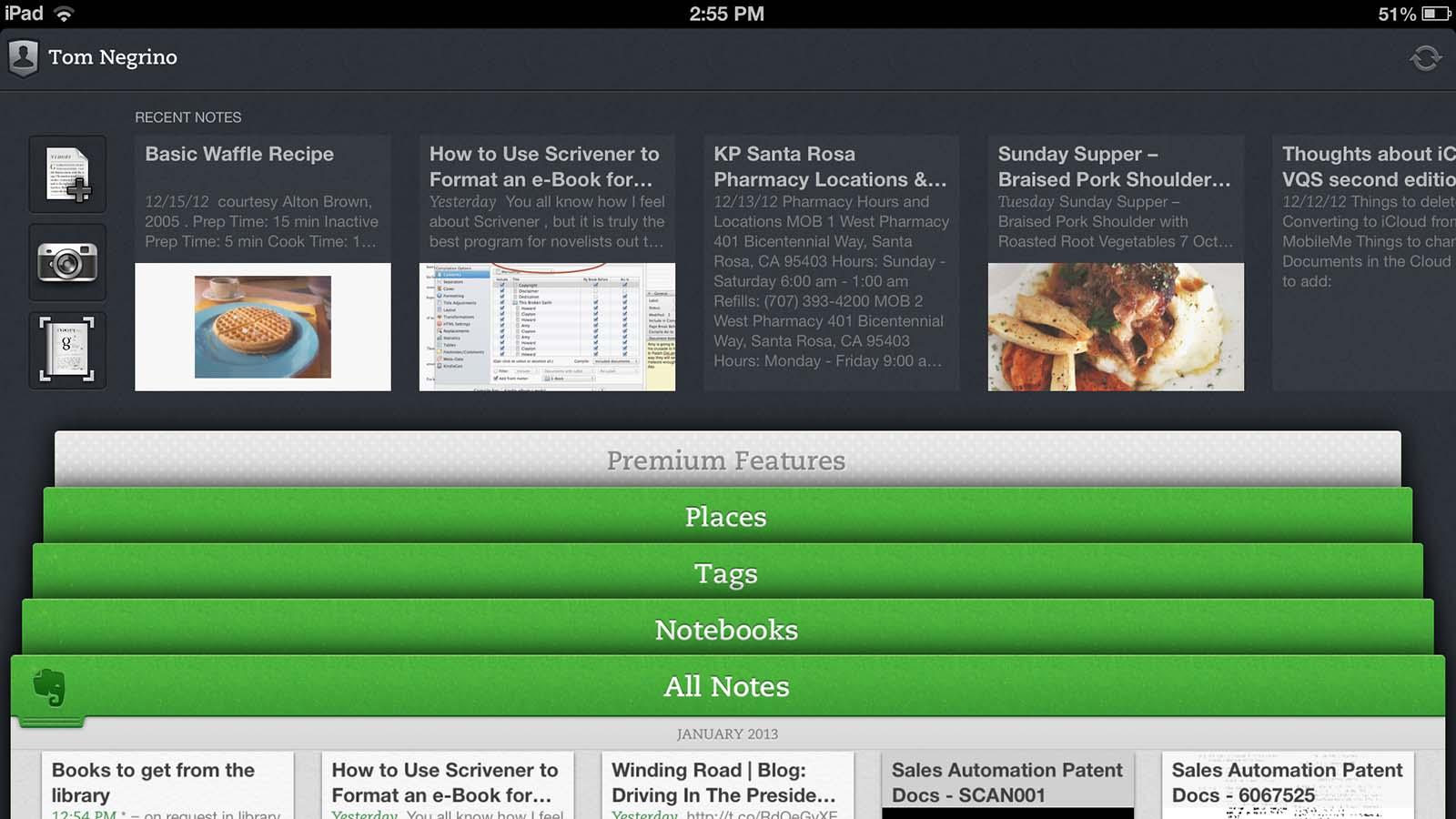 Evernote is something of a perennial favourite on business lists, and when you start using it, you’ll soon discover why. The ability to collect notes from anywhere, on almost anything soon works its way into your life. 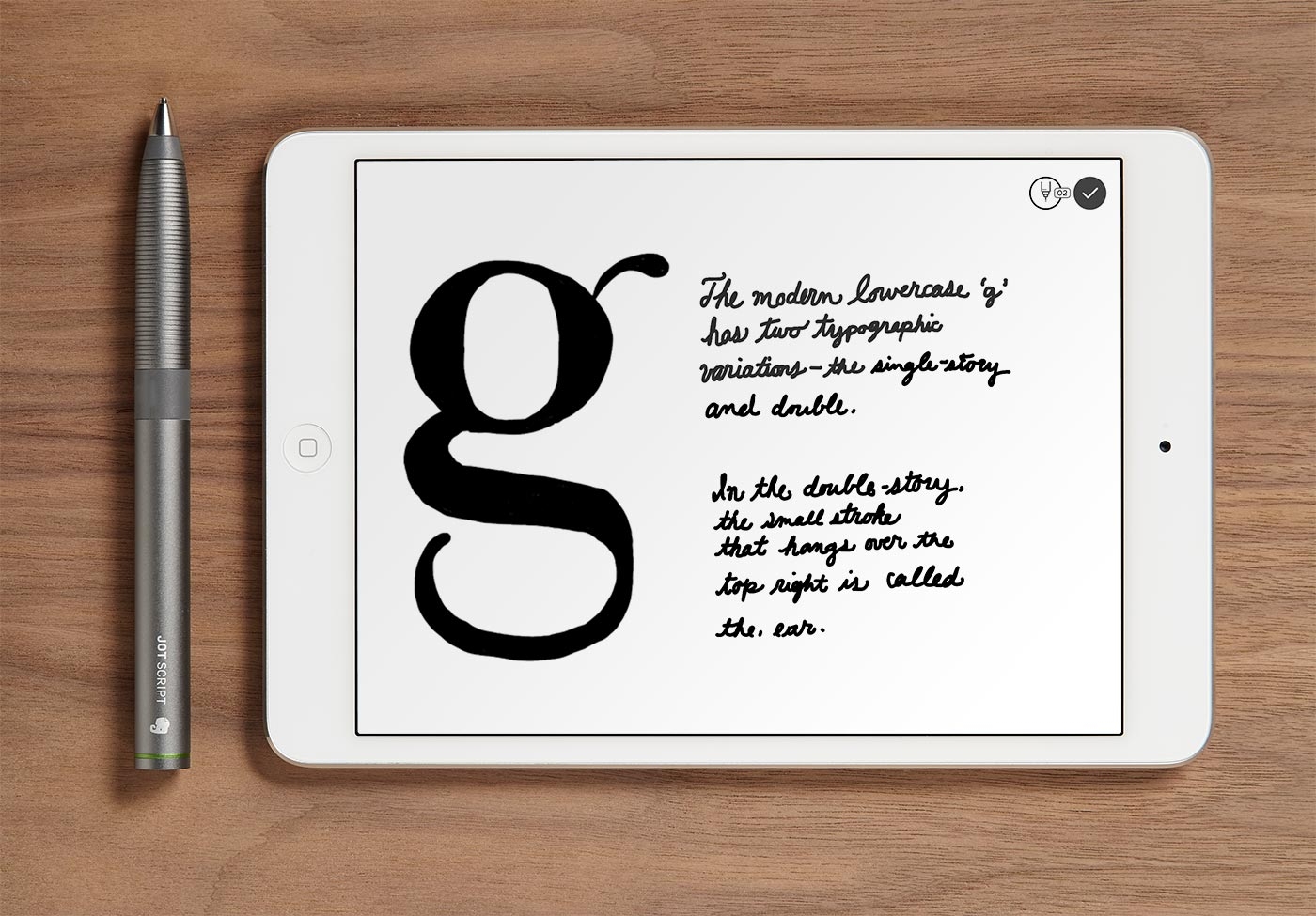 Penultimate is another app to add alongside Evernote. It features a range of papers to work on, and is great for handwritten notes. 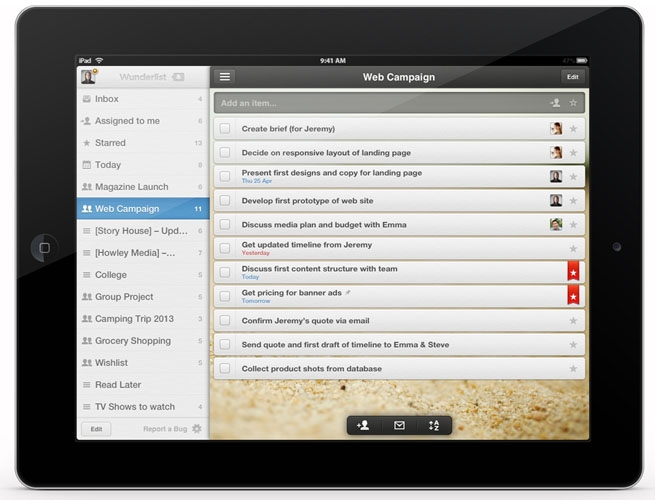 When it comes to to-do lists, we’re somewhat torn between Wunderlist and Things. While Things is the more Mac-centric list, you have to buy the app for iOS and OS X to get the most from it.

Wunderlist is a free app, and it has a web interface so you can investigate your to-do items on the move. That sold it for us. 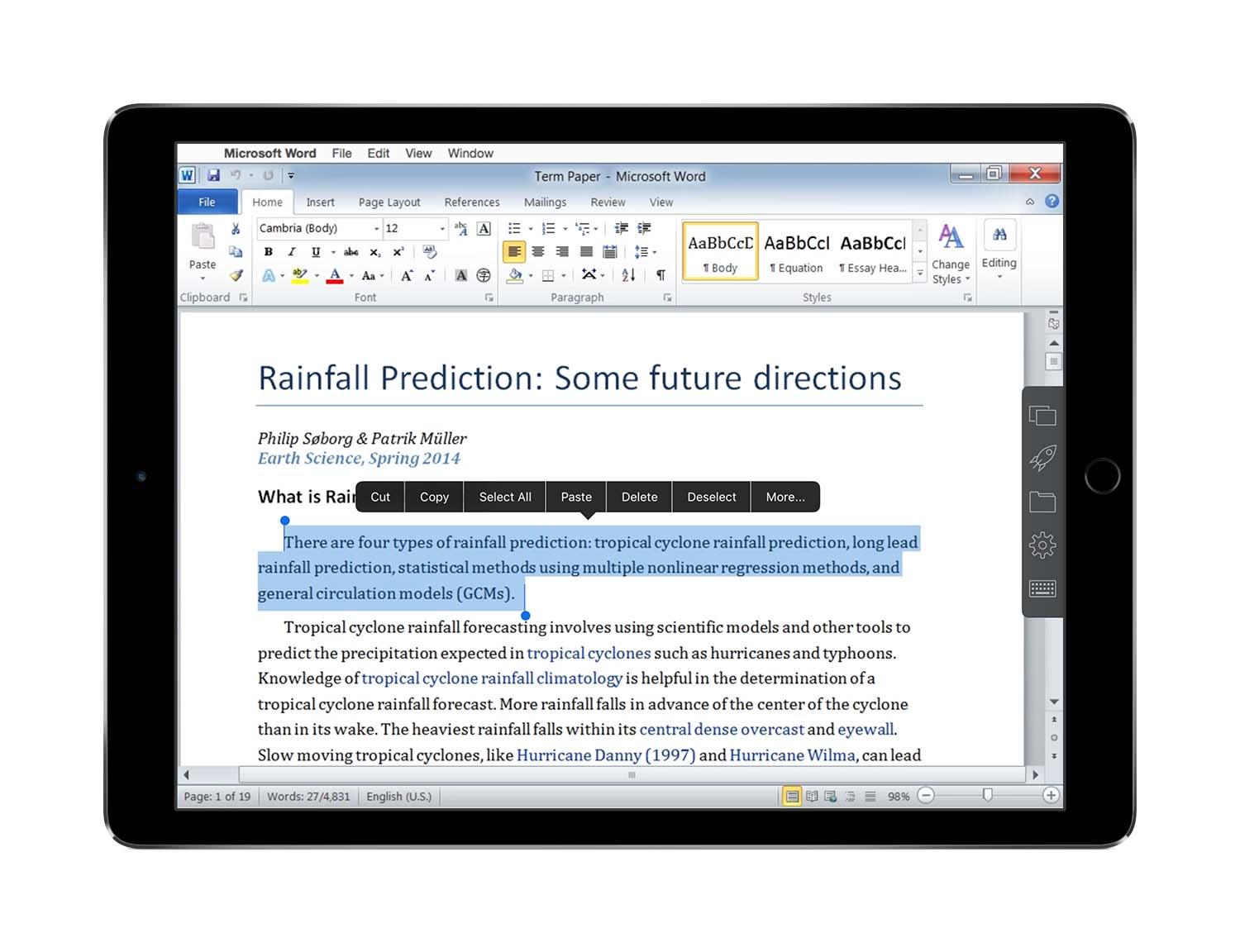 When it comes to remote access from your iPad to a Mac computer, nothing is as feature-complete as Parallels Access. It automatically resizes app windows, so they display full-screen on the iPad. The closest you’ll ever come to having a touchscreen Mac (for now, at least). 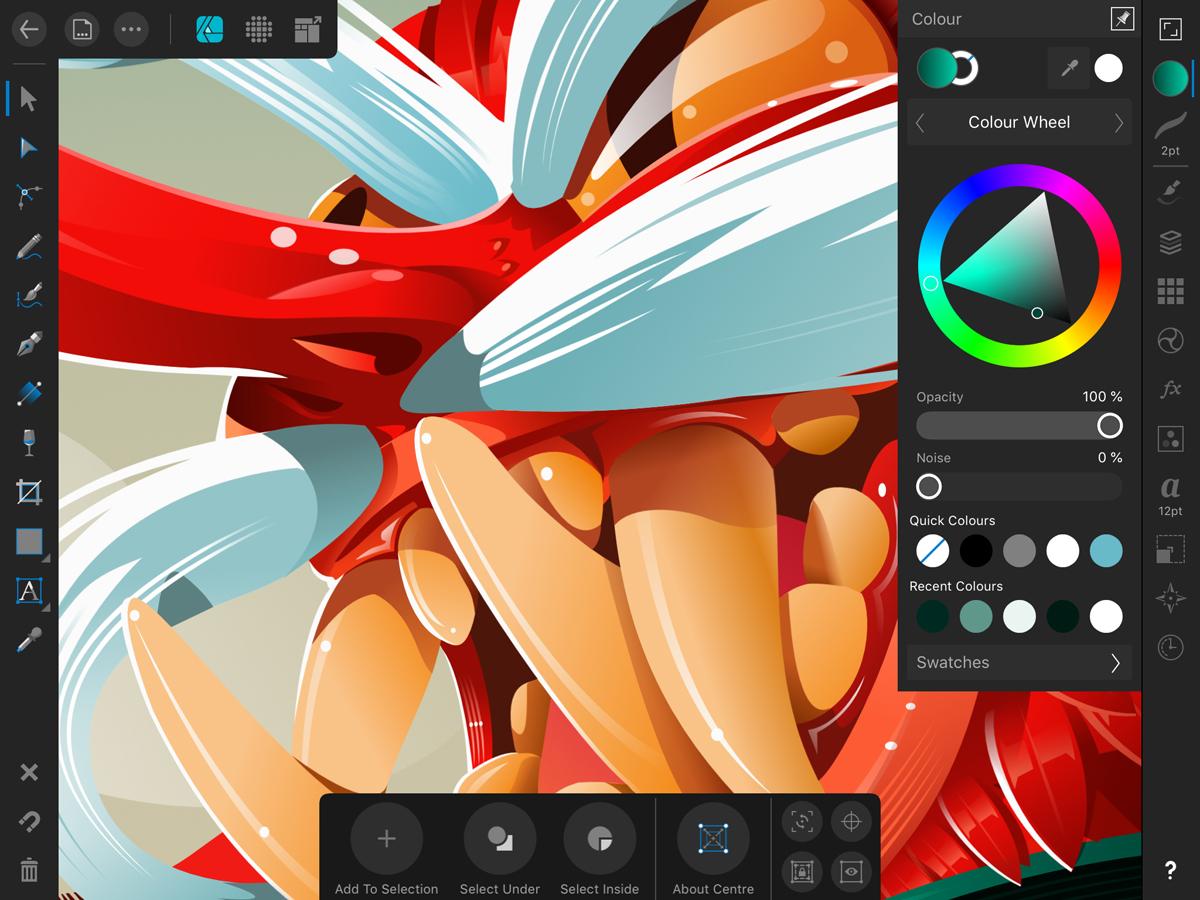 Serif’s Adobe Illustrator killer – a powerful and popular vector graphics package – has been launched on tablet in a form that the company claims was rewritten from the ground up to take advantage of multitouch screens. And it shows: the gesture support in particular demonstrates a sympathy with tablet workflows that is rarely seen in software ported from desktop.

Undo is activated by a two-finger tap – a gesture that Serif admits it pinched from elsewhere – while a three-finger tap triggers a redo. But the ability to switch actions by holding down one, two or three fingers while manipulating an image with another fingertip or the Apple Pencil, in the style of keyboard hotkeys, is original and intuitive.

Although the interface is pure mobile, the feature set remains true to the original and we never got the sense that it had been significantly cut down. It supports 120fps pan and zoom, print-ready colours and bleeds, a huge range of innovative masks and filter effects and deep file management and export options. And we were shown zoom up to roughly 18 million percent, all rendered quickly and smoothly.

Affinity Designer is a great and feature-rich option for digital illustrators but the price – particularly the temporary £13.99/$13.99 launch price – means it’s within the reach of ambitious hobbyists too. It’s compatible with the iPad Air 2 and later, although Pro models will better showcase the software’s Metal-optimised processing power. 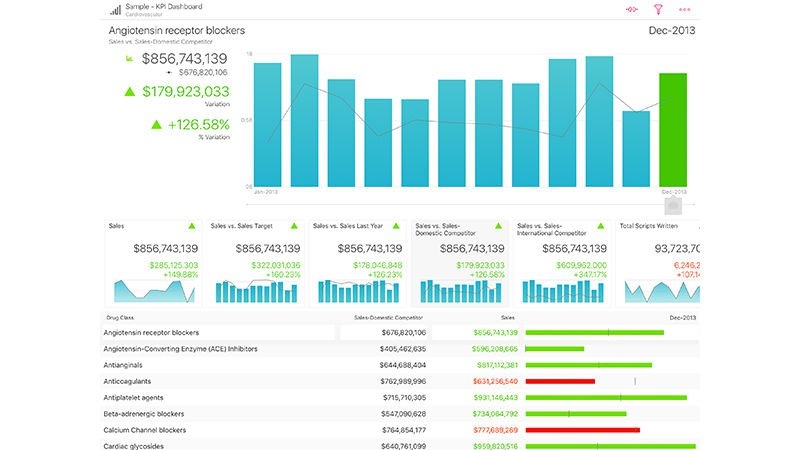 Microsoft Excel is fantastic for creating charts and tables, but they can look a little dry. Business experts are increasingly working in data-driven environments, and they need better-looking charts to stay ahead of the crowd. Roambi Analytics is an exceptional app that accepts data from Excel (and other sources) and turns it into incredible-looking charts. 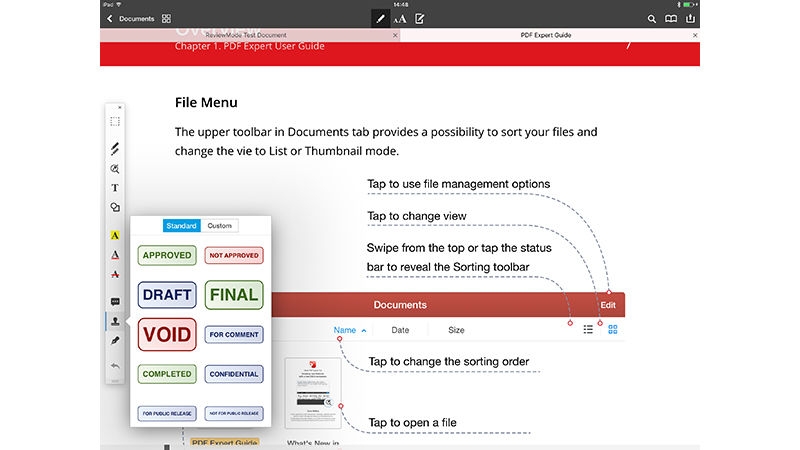 If you ever have to work with PDF documents, then this is the app to get. PDF Expert makes it easy to sketch over PDF documents, add notes, highlights and approve or reject design changes. It’s another one of those areas where having the Apple Pencil makes a real difference. 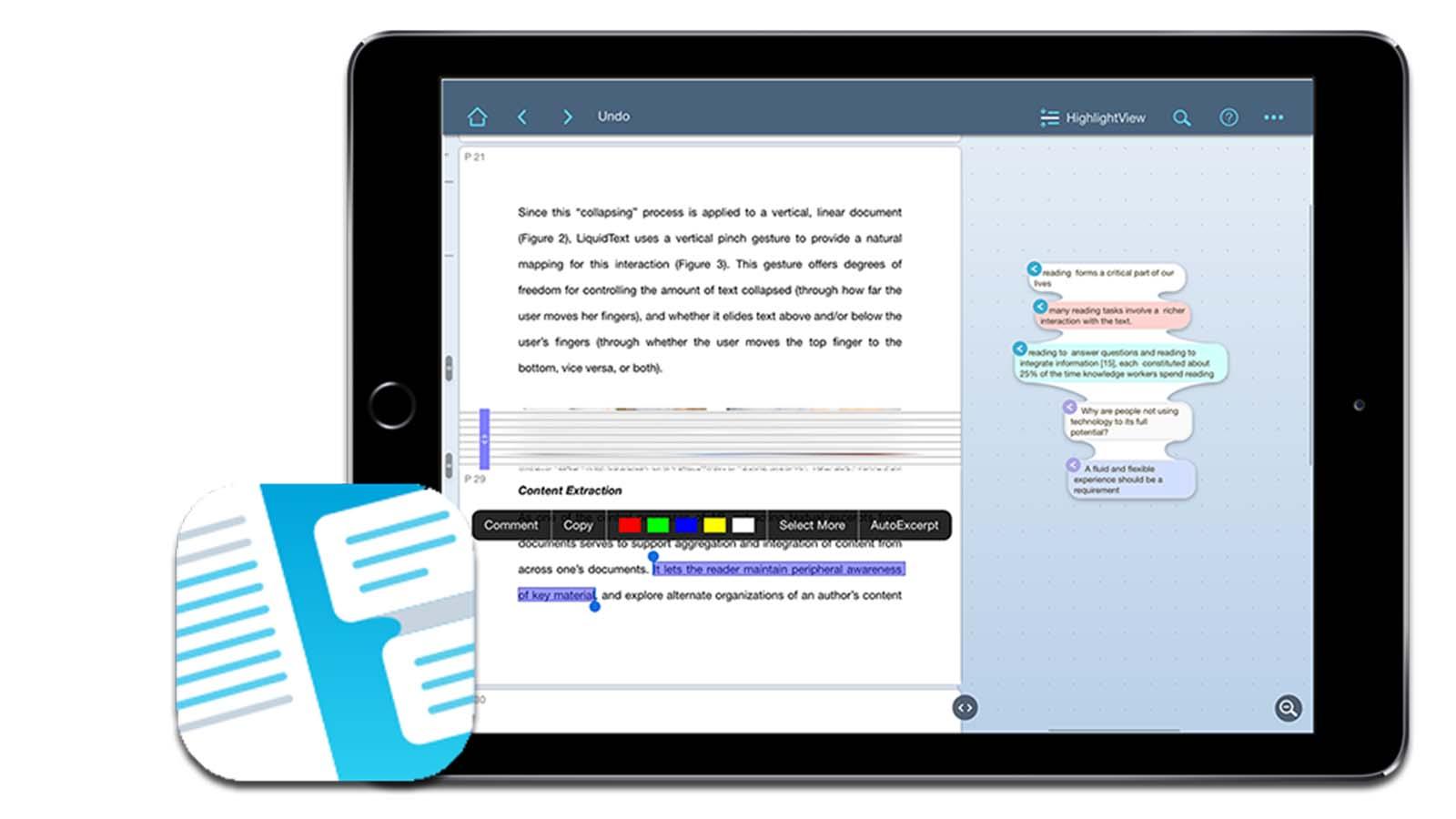 While PDF Expert is our go-to app for editing and approving PDF documents, LiquidText is where we go if we just want to read them. More than any other app it’s easy to skim through text, and add sections and paragraphs to a bookmarked area. You can pinch text together, which makes it much easier to compare text from different section. 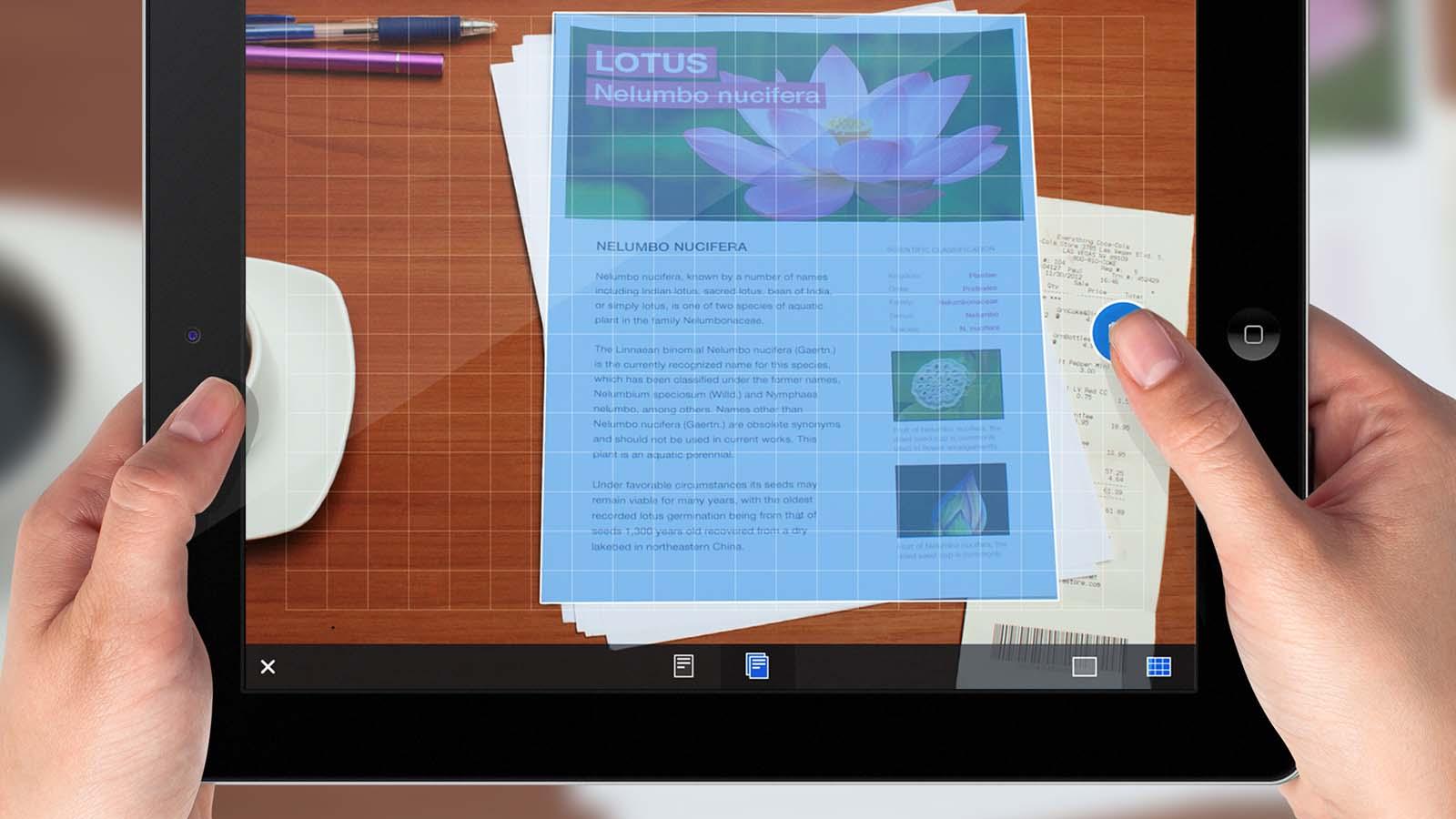 Scanning documents with the iPad’s camera and converting them to flat documents is a trick many iOS users overlook. While you can take a photo with the camera, an app like Scanner Pro automatically detects the edges of the document and flattens it out. The end result is that you get a scanned document without having to use a scanner. There’s a few apps out there doing the same trick, but Scanner Pro is our favourite. 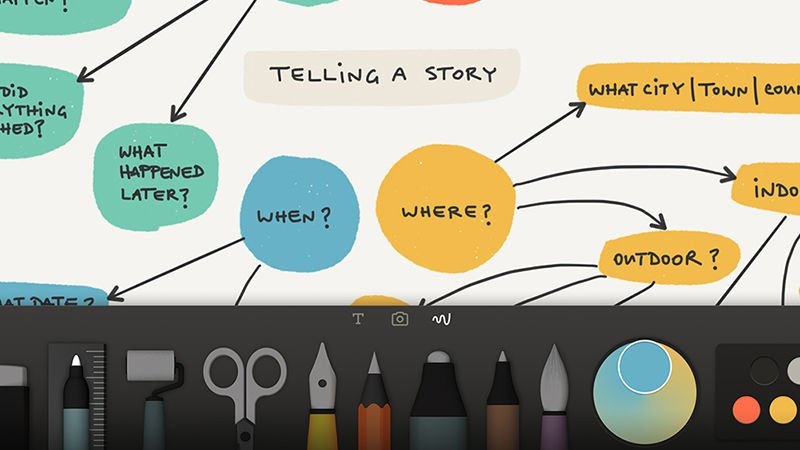 Like its namesake, Paper is just that: paper for your iPad. This is our favorite sketching app. Perhaps because it has so few features, Paper makes it easy to sketch out ideas without getting distracted by clutter. There are few tools, but a comprehensive range of pencils and a neat ruler tool that draws lines, arrows and shapes from your doodles. 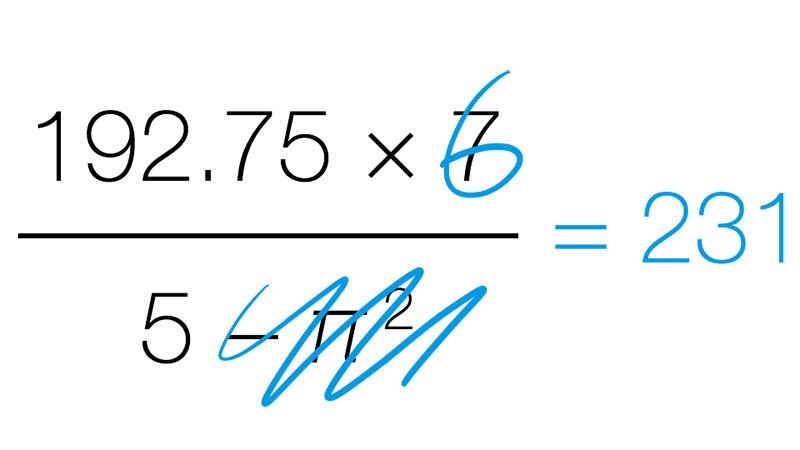 Unlike the iPhone, the iPad doesn’t have a built-in calculator app. Nevermind, there are lots available on the App Store. MyScript is a favourite of ours because it enables you to draw your calculations on the screen, as if you were sketching them out on paper. Only it magically arranges the numbers and does the maths for you. Calcbot is the one to get if you really want something more traditional. 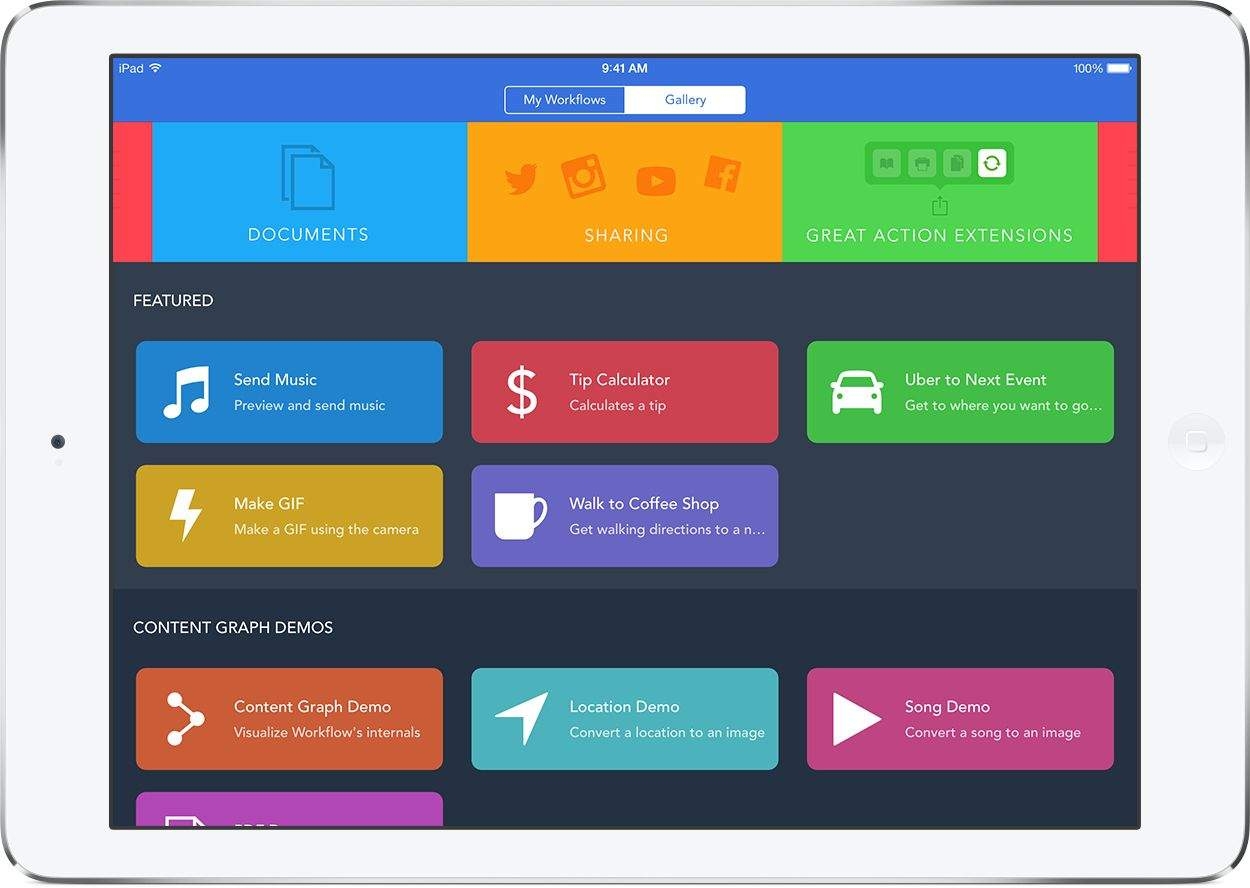 A relatively new addition to my digital bag of tools is an app called Workflow. Think of it as the Mac’s Automator feature, but for iOS devices.

The app makes it possible to automate mundane tasks such as annotating, then deleting screenshots in your Camera Roll, or more complex tasks such as converting a YouTube video to an MP3 – without you doing more than tapping a couple of buttons. 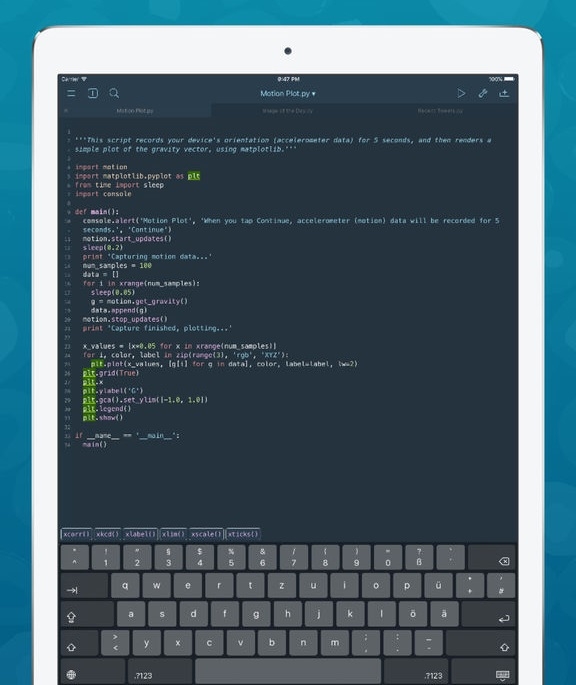 I also use Pythonista to automate parts of my daily work routine. Taking a different approach than Workflow, Pythonista requires you to code actions in Python. I’ve found the list of scripts in the app’s forums to be more than sufficient to get started with. I get the most use out of Pythonista when it comes to creating consistent screenshot layouts for posts. Additionally, it cuts down the amount of time it takes me to process screenshots. 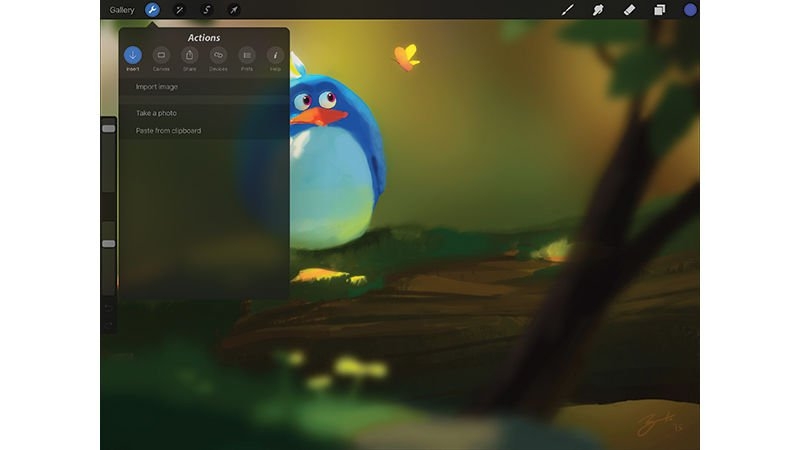 There was a time when editing photos on the iPad was mostly clunky and inconvenient. Then Pixelmator for iPad happened and the iPad became a legitimate photo editing platform. Perhaps I’m overselling it a little bit, but really, this app is easy to use, powerful and has near feature parity with its macOS counterpart. I just wish iCloud Drive played nicely with my RAW image files. 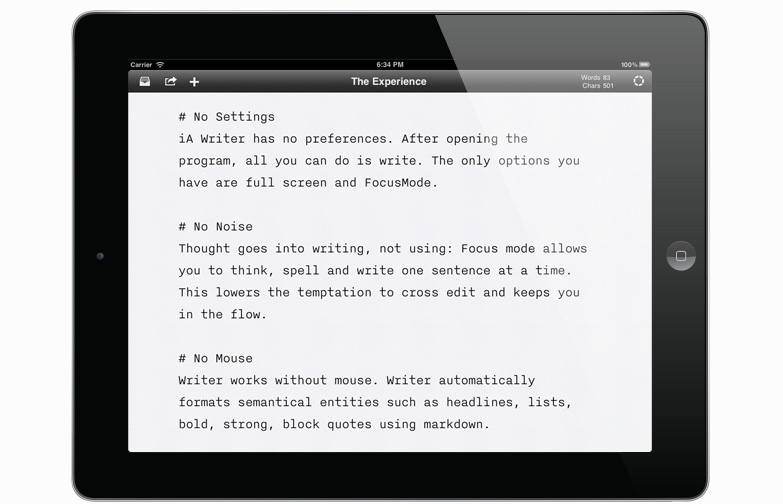 iA Writer is my preferred writing app due to its Markdown integration and distraction-free writing interface. Best of all, it’s not just for those who often stare down a blank screen with a blinking cursor. One of its lesser-known uses is creating and sending HTML-formatted email. 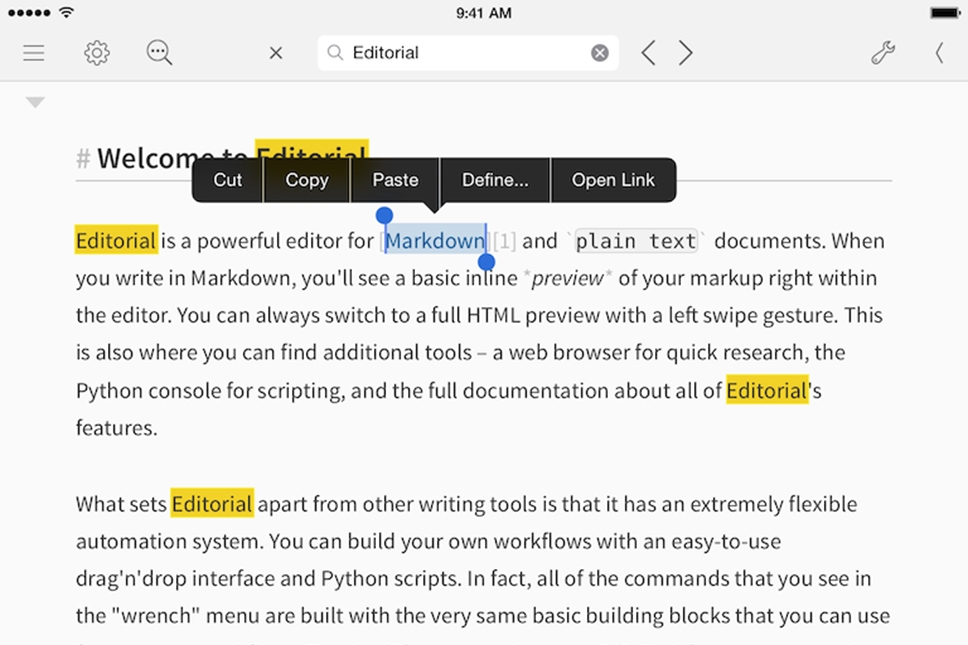 Editorial is the complete opposite of iA Writer, with buttons and information all over the screen. Editorial enables users to create workflows such as spell-checking text, Googling synonyms for a word, and finding and replacing text, just to name a few. It even offers a built-in browser for quick research, eliminating the need to leave the app. Think of it as a text editor on steroids. 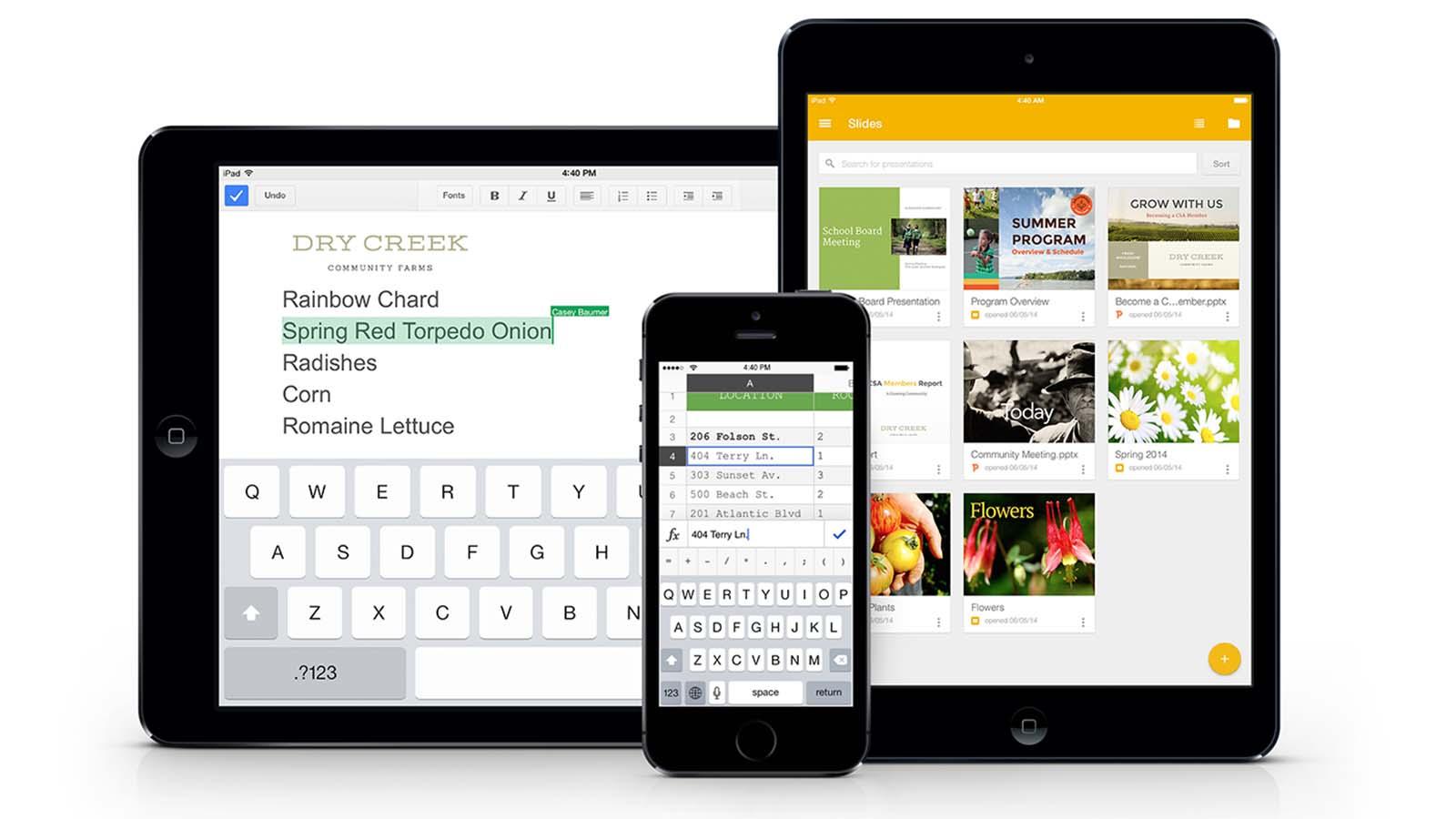 The combination of Google Docs,  Google Sheets and Google Slides is the best setup for sharing and working on the same document with people both inside and outside of your company. If you find yourself having to work with other people a lot, these three free apps are a must. 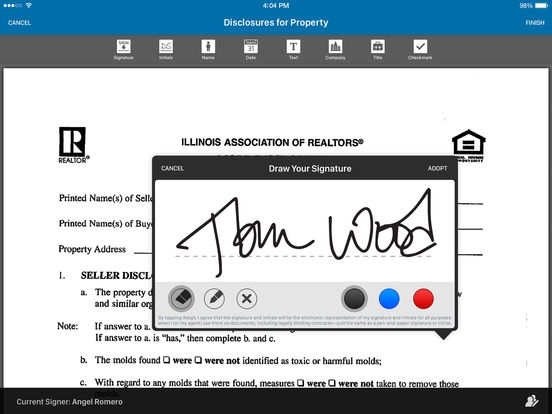 Printing, signing, scanning, and then emailing important documents can bring a morning’s productivity to a screeching halt. DocuSign‘s interface is a bit confusing at times, but overall it gets the job done. With a few swipes and taps I can place my initials and signature on a document and send it back without ever leaving my desk. Not to mention, I get to do my part in saving the planet due to not having to print out lengthy contracts. 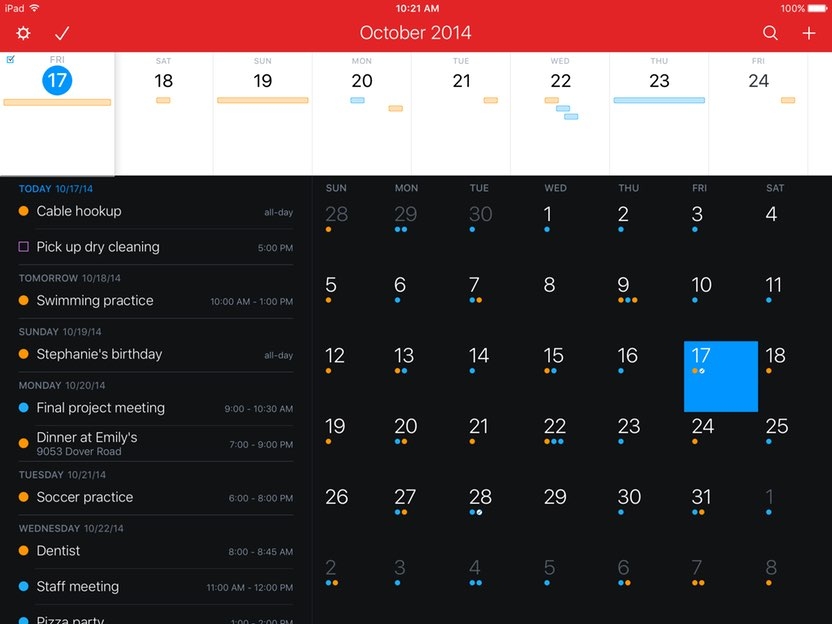 Fantastical 2 is one app I’d be lost without.

Fantastical makes entering an appointment or reminder nearly painless with its ability to turn “Lunch with John tomorrow” into a scheduled appointment. But my favorite feature is that it combines iOS Reminders and your Calendar into one app, making it easy to manage both types of entries from the same place. 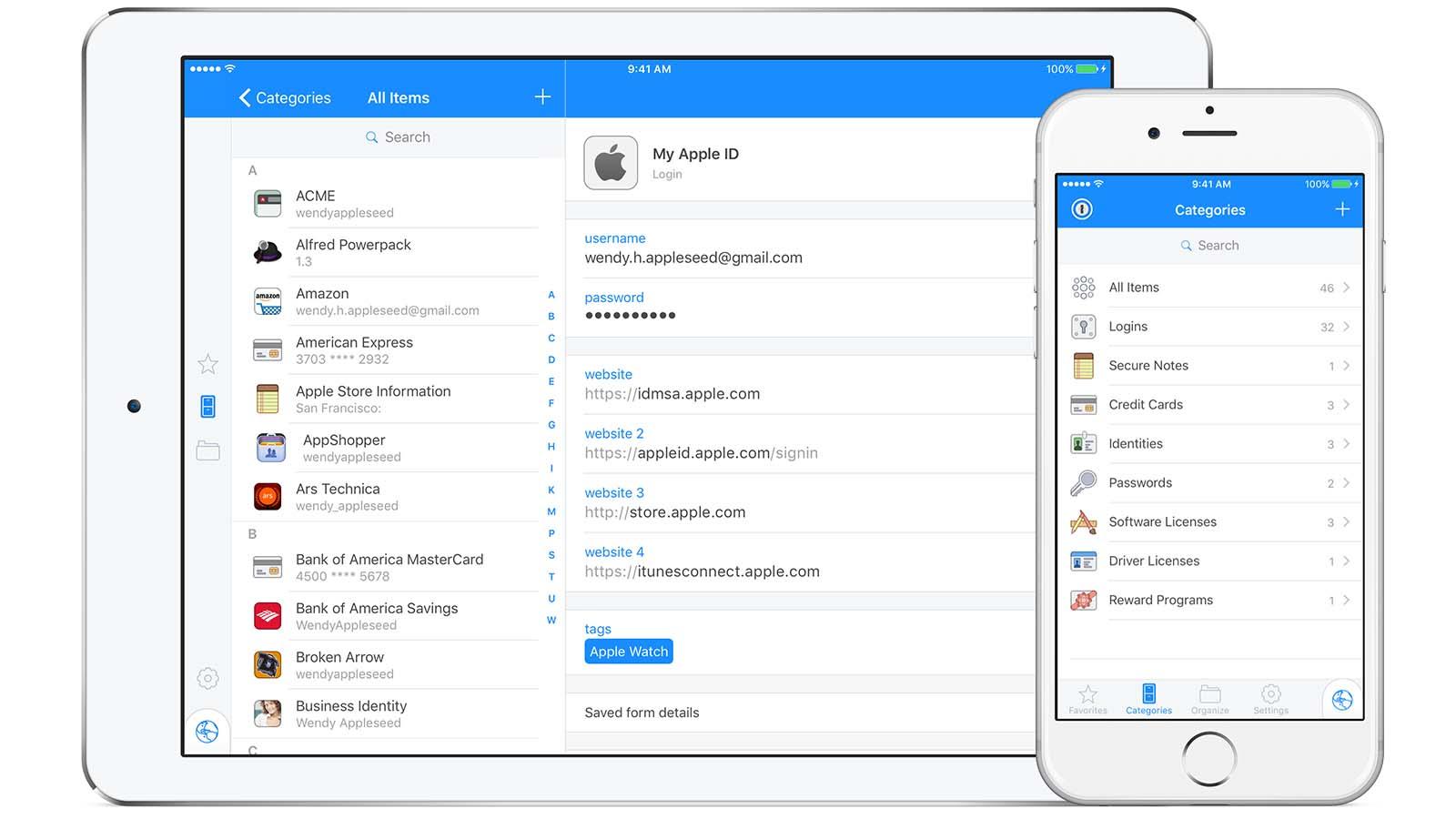 With the number of leaks and hacks surfacing seemingly daily, having strong passwords is more important than ever. 1Password is the app I use to create and manage my passwords. My favorite feature of the app is its integration with iOS. Using extensions, I can access my vault directly within Safari on my iPhone or iPad and log into accounts without having to bounce around between apps. The app is free, and the Pro upgrade is via in-app purchase.