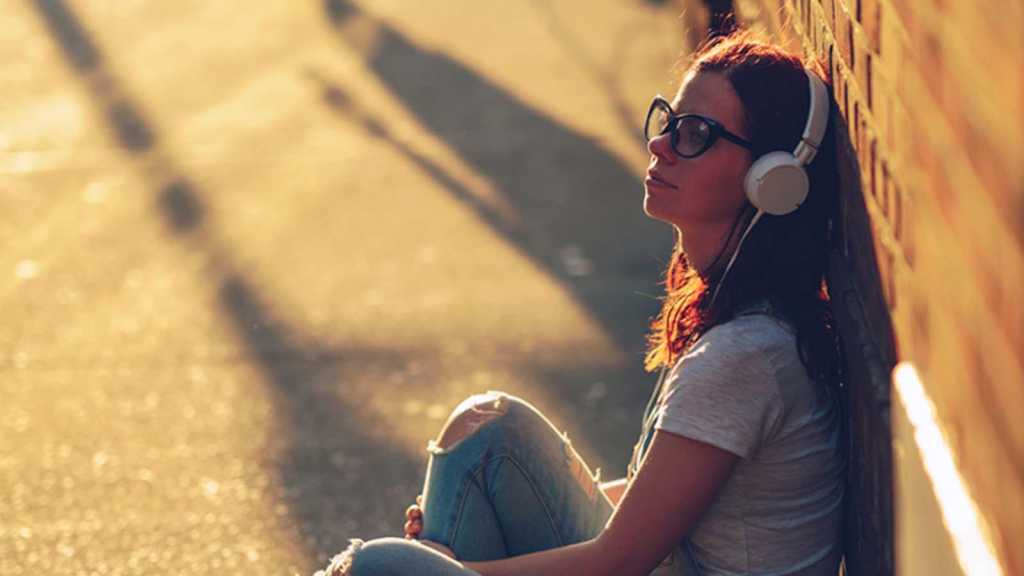 The humble podcast has come a long way since the early days of online radio shows, when people would record themselves in their bedrooms using cheap fuzzy microphones.

Now, as the popularity of podcasts increases year on year thanks to shows like Serial, This American Life and The Bugle, we’re finding ourselves swamped in entertaining and addictive content.

To get the best out of this exciting (and usually completely free) content you need a decent podcast management app. These allow users to subscribe to shows so that new episodes are automatically downloaded and sorted into easy-to-find places. With so many great apps available today, which should you choose for the perfect listening experience?

Here’s our selection of the top seven picks, but such is the wealth of choice available that you should also check out Podbean, The Podcast App and Castbox before settling on your favourite.

It really is a great time to get into this audio wonderland. 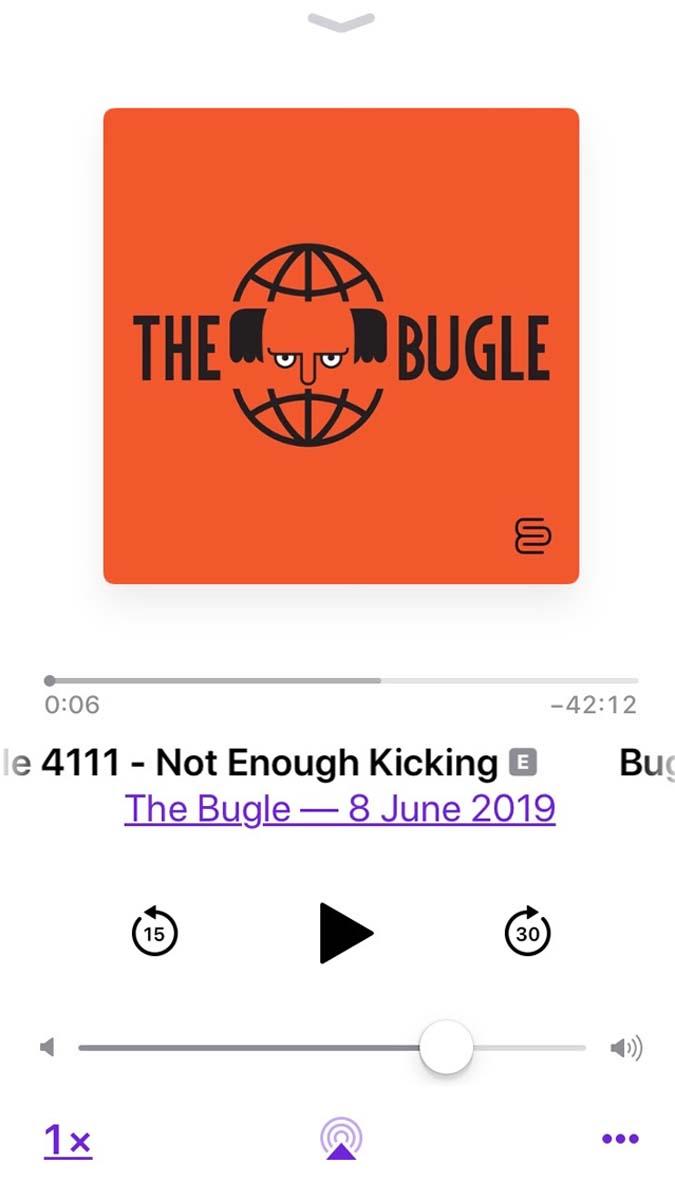 The native podcasts app from Apple used to be quite feature-slim and unintuitive. However, after some iOS iterations, it has improved.

It’s convenient to have an app that is embedded in the ecosystem and fully controllable through Siri. You can tell the voice assistant to play certain episodes, fast-forward or rewind, and even subscribe to a show.

There are settings for adding episodes to the Play Next queue, alter the playback speed, and play audio through other devices such as Bluetooth speakers or Apple’s own HomePod.

If you don’t need complex sorting, sleep modes, or other advanced feature then Apple Podcasts is free, very usable, and probably already on your device.

At WWDC 2019 Apple also announced that iTunes would be retired and replaced instead by three dedicated Apps – Music, TV, and Podcasts. So this could see some improvements and features added to the app in the coming months. 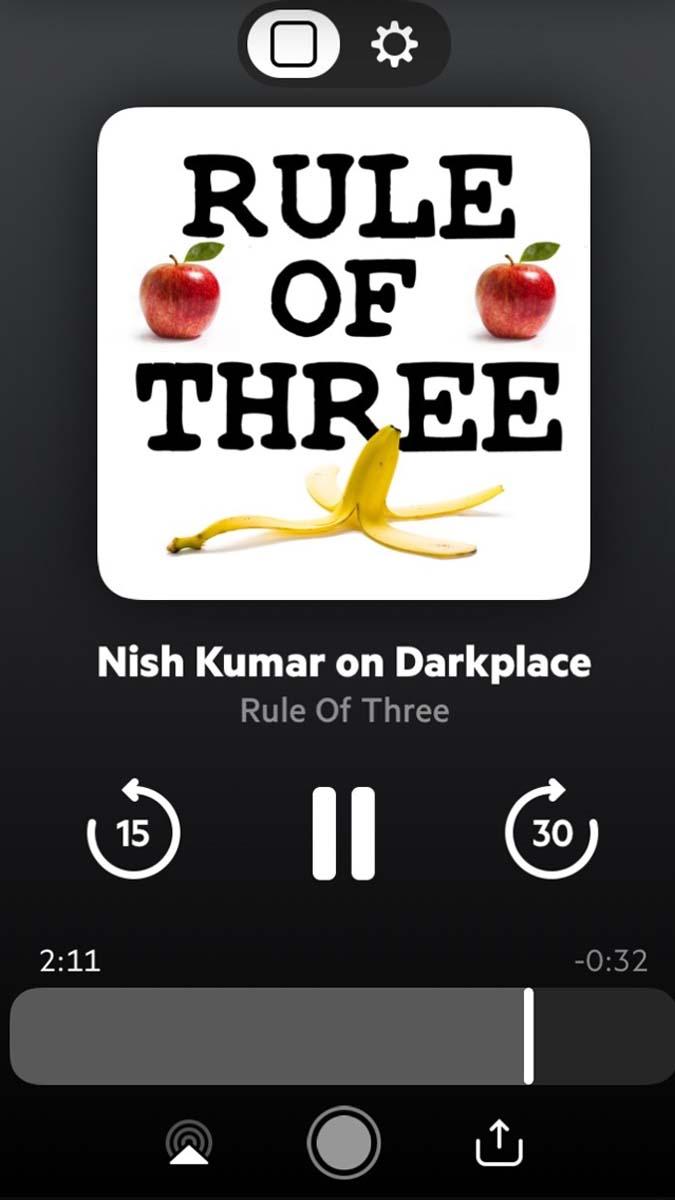 If you want something that truly lives up to the title of podcast manager, look no further than Castro.

With an intuitive episode ‘triage’ system, the app allows you to scan through new episodes of shows in an inbox, choose which ones you want to queue up and archive the rest so there’s no more messy feeds. You can select your favourite podcasts to be put into the queue automatically and archive the ones you don’t want to listen to. Not everyone wants to listen to every single episode of a podcast and Castro gives you the freedom to do that.

You can star your favourite episodes, just in case you want to go back and listen to that specific one again or share it with a friend. Additional controls include a sleep mode that stops playback after a preset time has elapsed and speed controls for the audio.

All of these features are free, but Castro also has a Plus tier that brings the ability to trim silences in episodes, Night Mode, download limits, audio enhancements, and other useful little refinements. This costs £17.99/$8.99 p/a which admittedly is a bit of a stitch-up for UK users, but the free tier has plenty to keep the British happy. 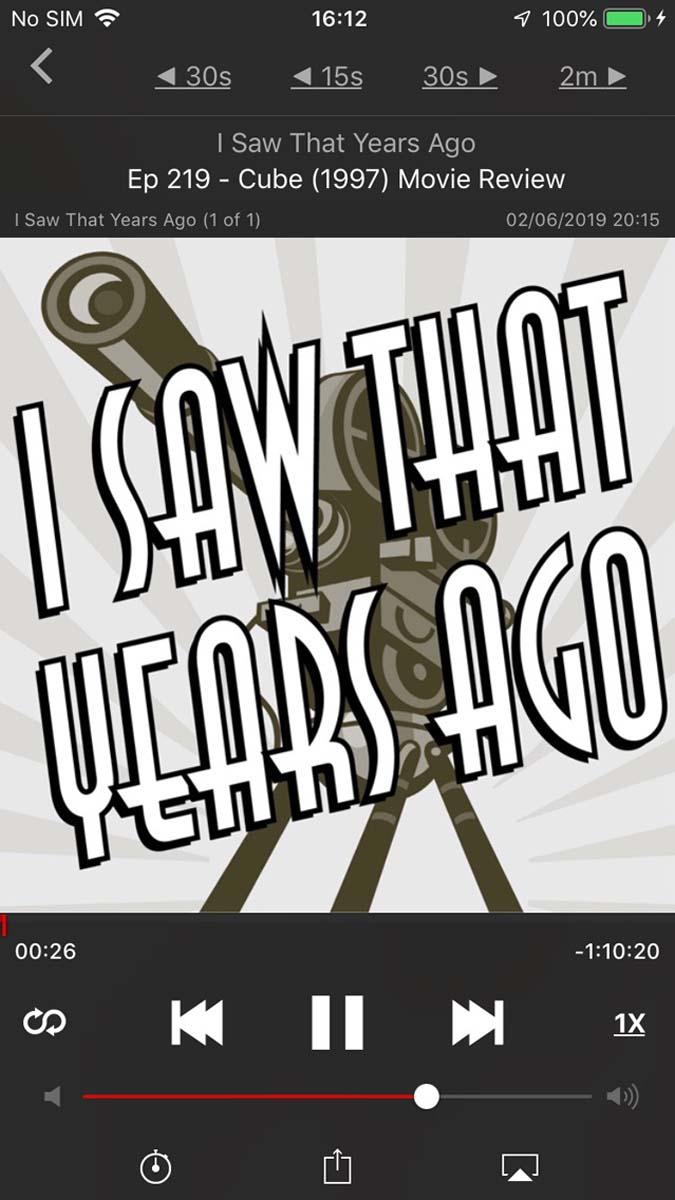 Downcast gives you a fair bit of freedom with your podcasts, allowing you to export them to cloud storage services such as Dropbox or sync with other Apple devices through iCloud. It also plays host to a whole range of cool features to help you personalise your listening experience.

For those who want to skip the ads often placed at the start of a podcast, Downcast lets you start and end podcasts early. It also has gesture support so you can fast forward by scrubbing, mark as unplayed or played or begin playback, meaning you don’t have to look at your phone when you’re using the app.

There’s password-protection for podcasts, so you can keep those with a more adult vocabulary safe from youngsters, and the recent addition of CarPlay means you can listen while driving, so long as you have a compatible vehicle. Apple Watch is also supported. 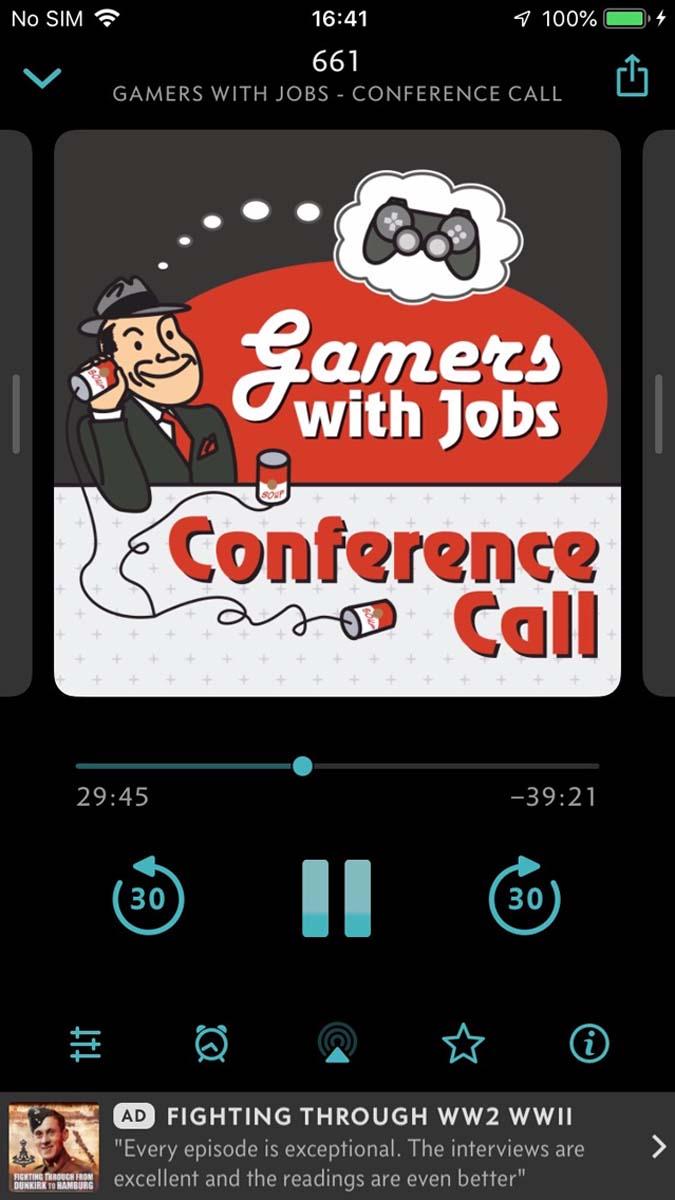 Overcast is a simple-to-use and aesthetically pleasing podcast app packed with clever and useful features for the everyday listener.

Smart Speed is far and away Overcast’s best and most intuitive element: it cuts out long silences, making certain there’s a seamless, continuous listening experience. Voice boost equalises the voices of the hosts and maximises the volume of poorly recorded podcasts. The best part is that these can be set per podcast rather than universally, so if you have a show that is particularly quiet or with lots of gaps you can fix things easily.

There’s also a sleep timer that can be set to any time you like, and you’ll also find a dark theme, plus support for Siri shortcuts that allow you to control the app via voice commands and Apple Watch support brings controls to your wrist. Dig in even further and you’ll find plenty of other settings that allow you to hone the experience to your particular whim.

Overcast requires you to register for an account, which might seem strange, but this is so that your phone isn’t continuously syncing and looking for new episodes. Instead, it works server-side to download any new episodes so your data isn’t forced to do the heavy lifting. Overcast syncs your current playback position on your phone to the desktop so you’ll never lose your place if you want to listen on your computer.

Downcast does have banner ads, which is how the developers can afford to offer it for free, but if you like how it all works then there’s a £8.99/$8.99 p/a Premium tier that removes these and helps with future improvements to the app. 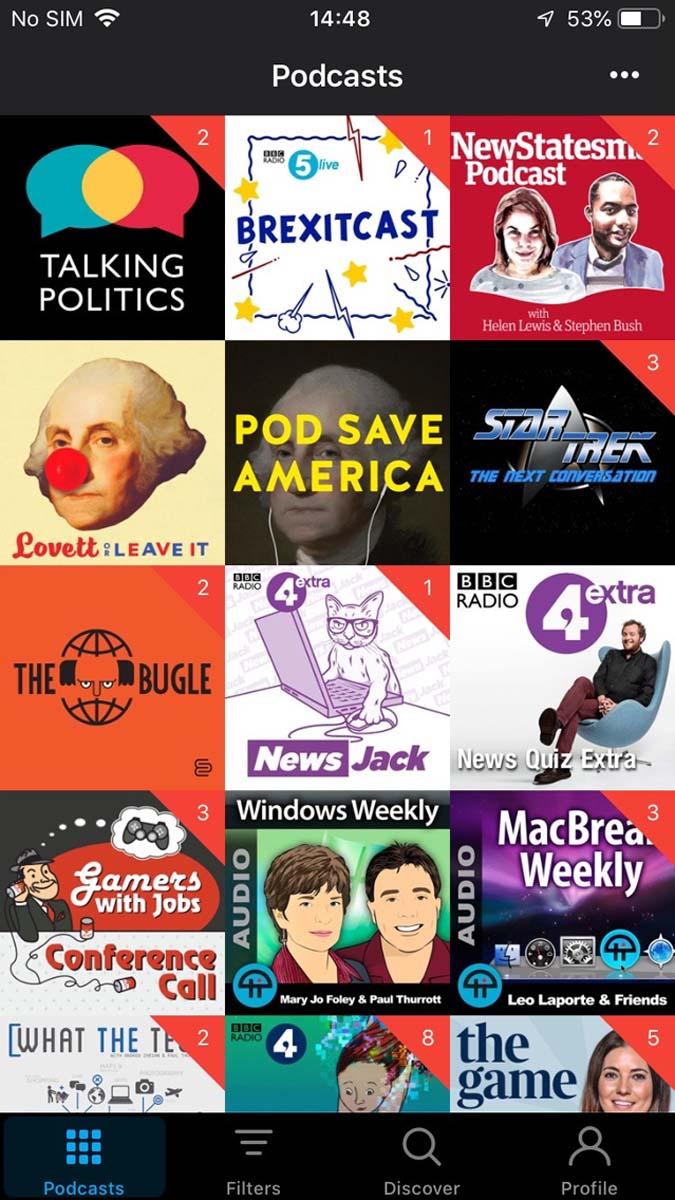 Pocket Casts is one of the best-looking podcast apps out there, with a sleek and user-friendly interface.

The app makes it clear which episodes are locally saved on your iPhone and which ones are not. We found that other podcast apps had fiddly user interfaces but Pocket Casts cuts that down to make something feature-rich but simple – it’s easy to find what you’re looking for.

You get volume boost and silence trimming, and Pocket Casts notifies you of any new episodes and will download them automatically as soon as they’re released so you don’t need to manually refresh your feed.

There’s also a fantastic filtering function to give you the ability to sort your episodes by downloaded, episodes in progress, already played and other filtering options. It gives you access to your own personal stats regarding your listening habits: for example, telling you how much time you’ve spent listening to podcasts and how much time you’ve saved using the silence trimming feature.

Support for Apple Watch and Siri shortcuts make Pocket Cast a well integrated experience, and the general aesthetic remains one of our favourites. As the app is cross-platform it also means you can sync your shows and progress between iOS, Android, and even your PC, making it one of the most versatile players in this roundup.

A recent redesign has made the interface a bit more confusing that it was before, with a few alterations just feeling plain wrong, but the active community and responsive developers will hopefully gets things back to the normal excellence very soon. 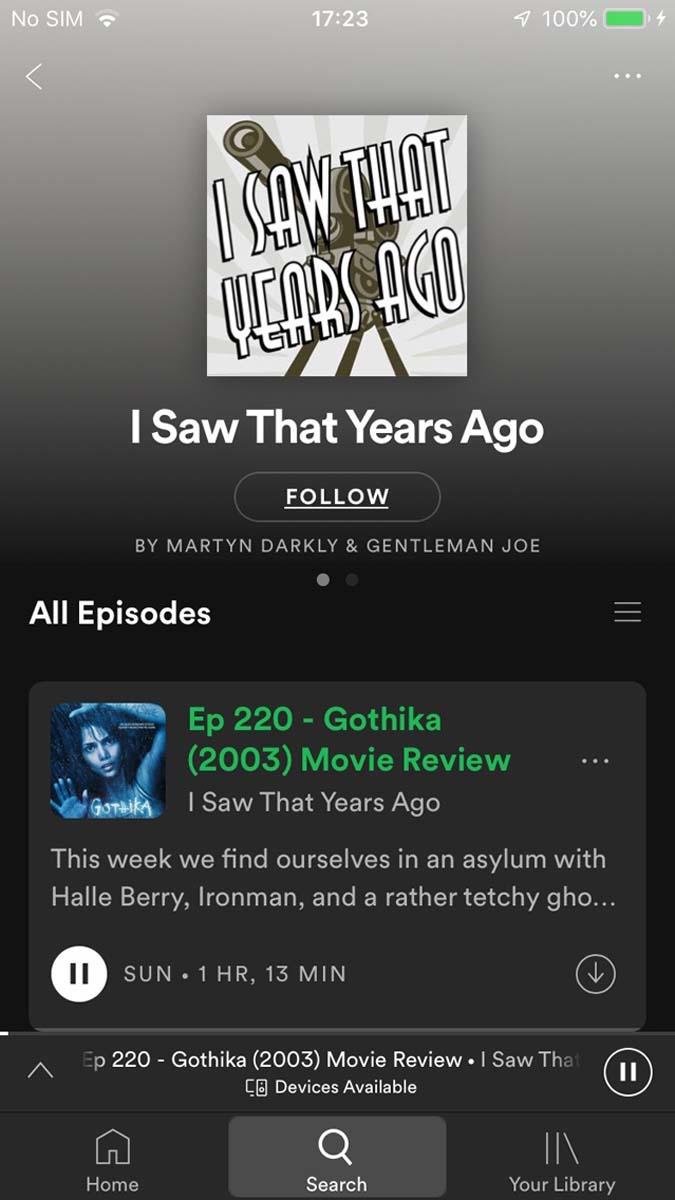 You might think that subscription service Spotify is all about music, but it recently added podcasts to its catalogue and this is great news if you’re already a member. There’s a wide selection of shows available, with most of the popular titles present and correct, and the player itself is surprisingly good, with controls for sleep modes, playback speeds, skipping through audio, and selecting speakers to play the content.

While you can access shows without signing up to the Premium tier, you’ll have to put up with ads and the streaming-only restrictions that come with the free option. Signing up to Premium costs £9.99/$9.99 p/m and brings not only a cessation of adverts but opens up a whole world of music that can be downloaded to your iPhone or iPad.

If you want to keep all your audio in one place, then the Spotify route is a fine one to pursue. 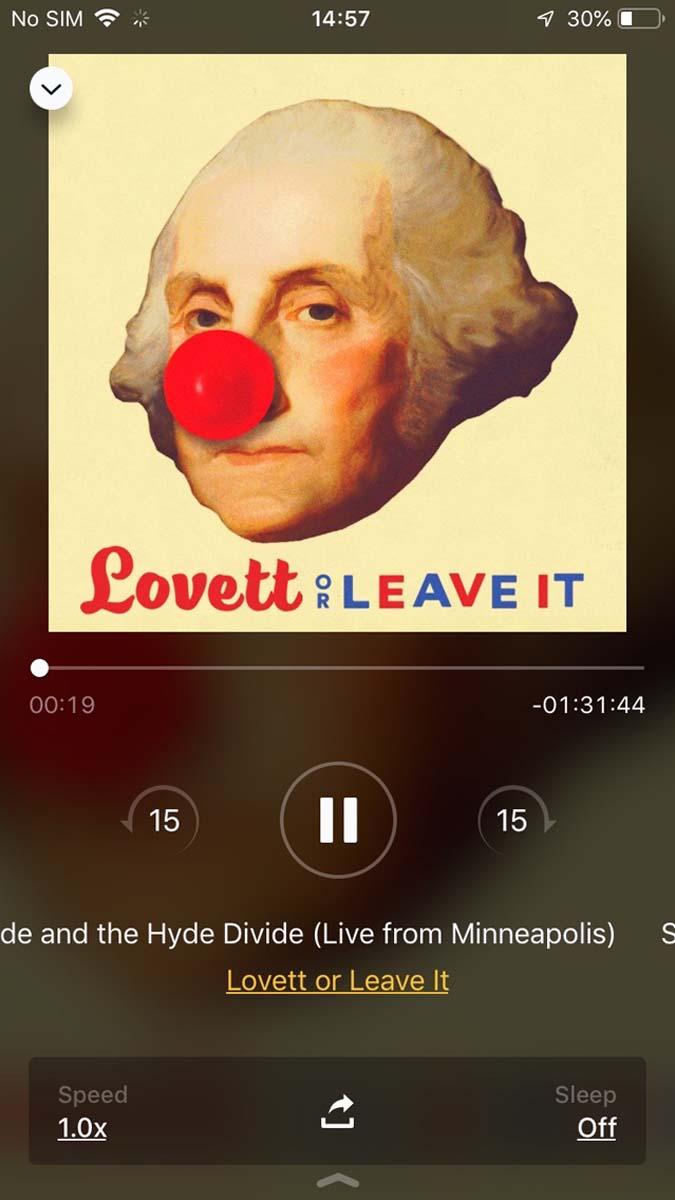 Acast has many of the normal features you’d expect from a modern podcast manager. There’s various discovery methods for finding new shows, auto-downloads for the latest episodes, playback controls for speed and sleep, plus skipping forward and back through the audio.

The one thing that differentiates it is that there are some shows that have partnered with Acast to offer premium content (usually additional shows) for a small subscription. For example, the hugely popular Football Ramble has a £1.99/$1.99 p/m subscription, while Why Are People Into That? offers an ad-free experience with additional content for $4.99 p/m.

You don’t need to listen to these shows to make use of the free Acast app, though.