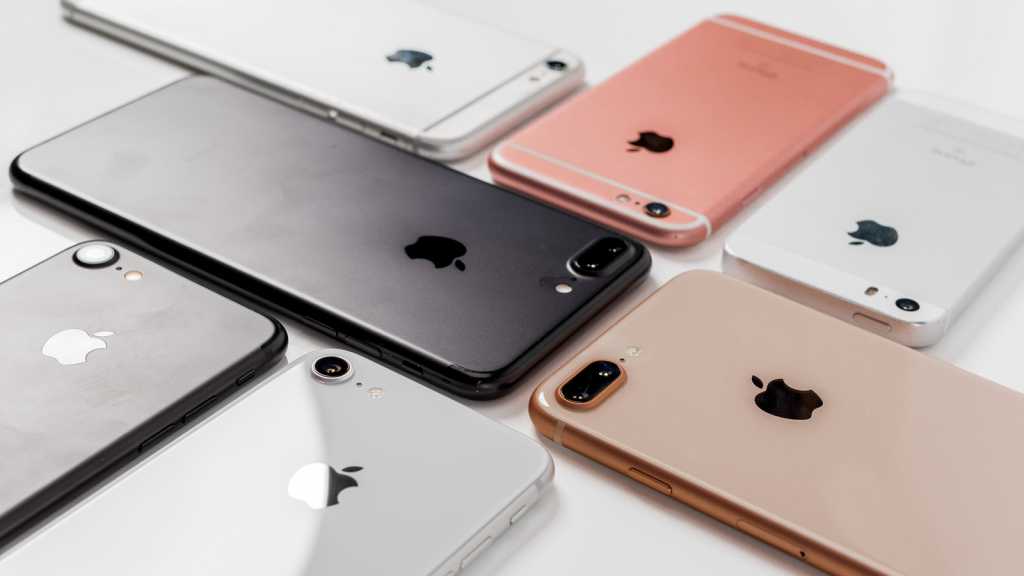 iOS 11 brought with it a number of new features, including ARKit. ARKit was arguably one of the biggest features of iOS 11, allowing iOS developers to integrate high-end augmented reality experiences into their app with little effort, and that was improved with the release of iOS 12.

The functionality is available on a myriad of iPhones and iPads, and when combined with the Metal 2 API, provides impressive results that’ll wow friends and family.

Of course, one of the biggest areas of AR development is gaming – remember the introduction of AR in Pokemon GO and how crazy that sent everyone? People loved the idea of seeing Pokemon in real life, and the interest has grown since then.

Two years after the initial ARKit release, there are plenty of augmented reality games on the App Store that take advantage of the tech. We’ve spent some time playing AR games on iOS, and here’s our pick of the best. 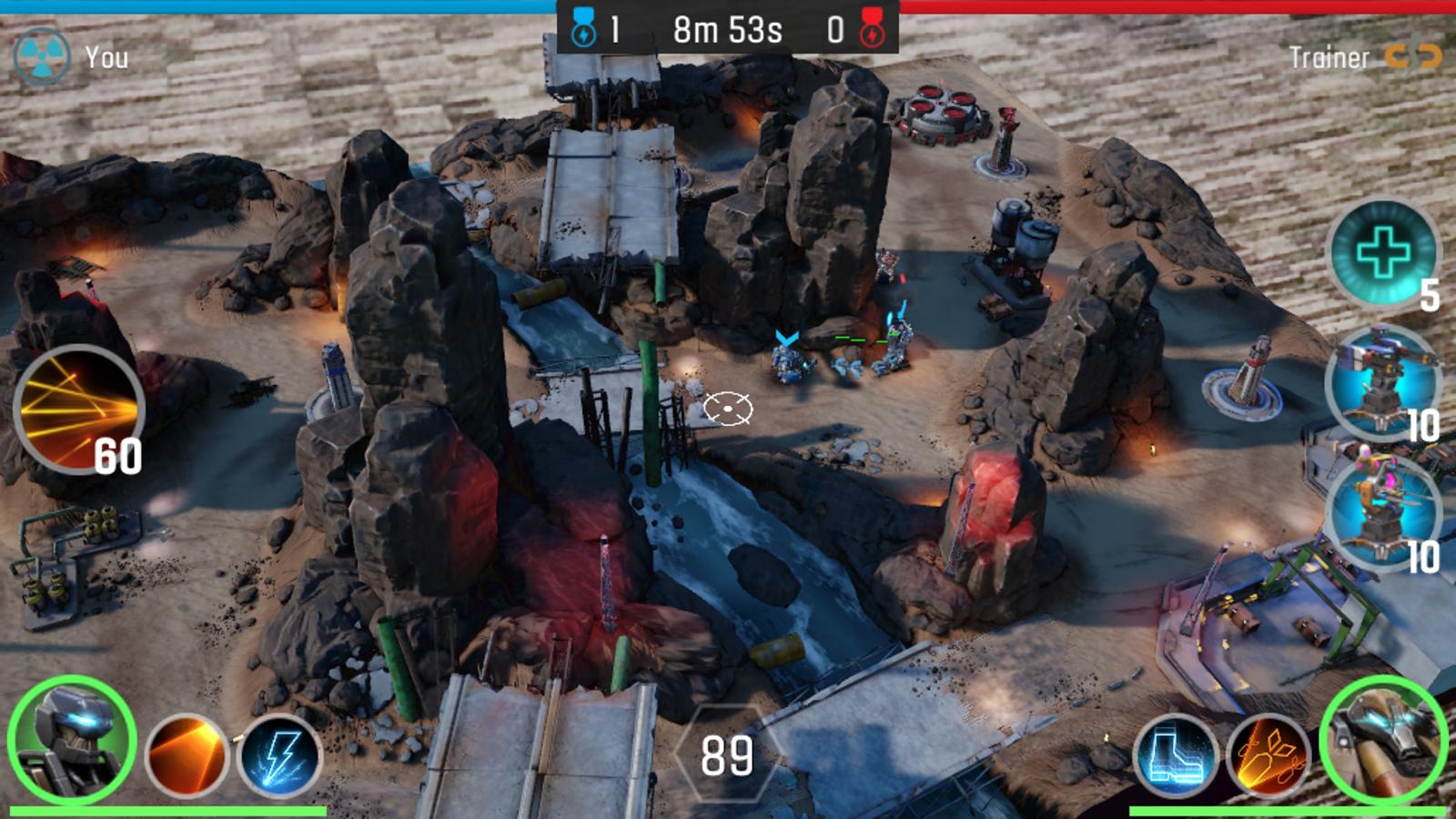 The Machines has got to be one of the most polished multiplayer experiences for iOS that we’ve seen so far. Transform your table top (or any other flat surface) into a highly-detailed battlefield where you’ll lead your team of Machines against friends both online and in the same room. Strategically fight your way across the map, taking down towers, enemies and of course, your opponent’s base to win the game.

It’s detailed both visually and in terms of spatial audio, as you’ll hear various sound effects as you get closer and further away from various elements of the table top strategy game. There’s a limited number of maps and heroes for now, but this is set to change in the upcoming 1.3.0 update.

The Machines is a perfect example of the future of AR, and we can’t wait to see how it’s improved in future. 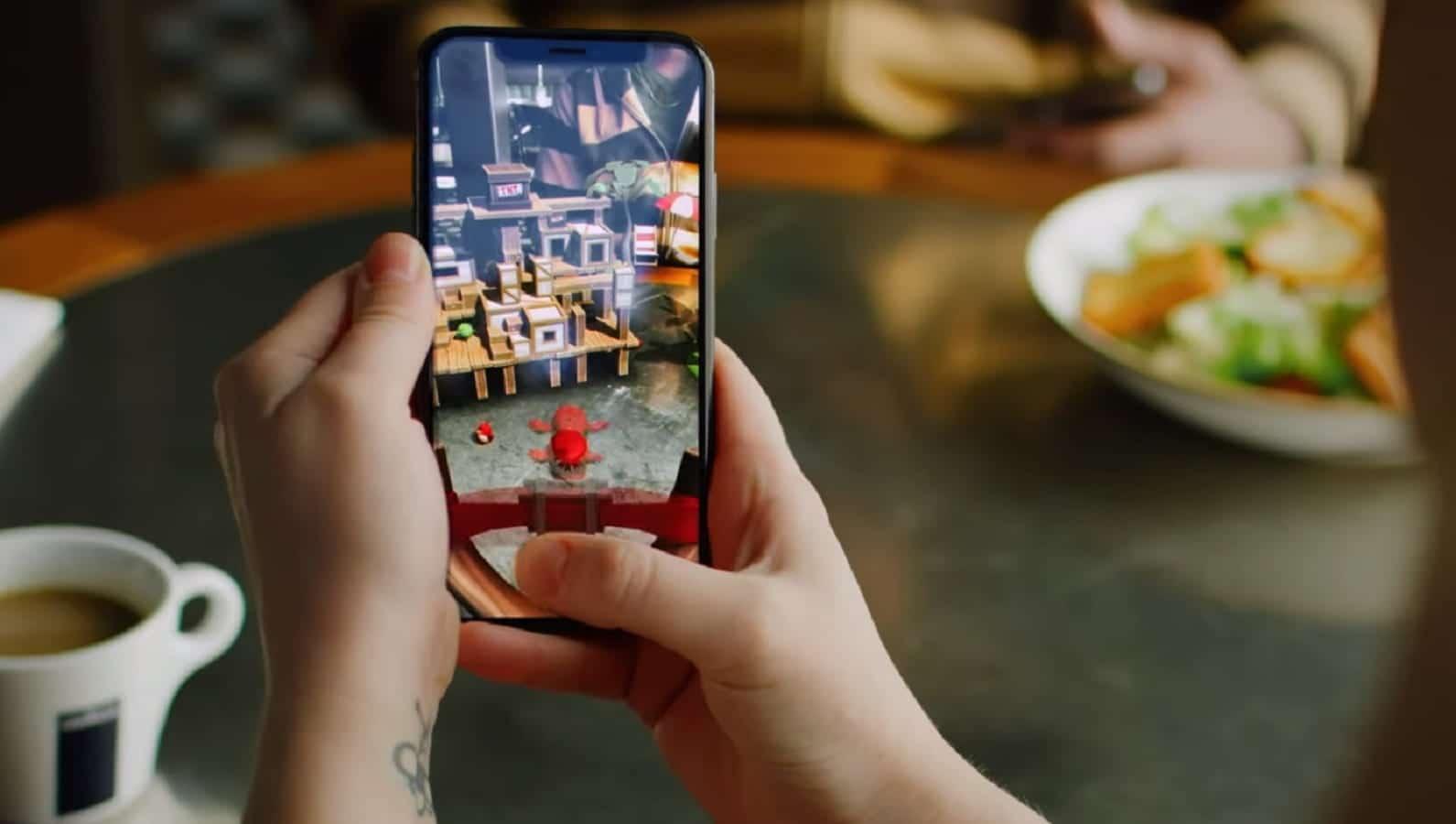 After years of Angry Birds on iOS, you can now fling Red, Chuck, Bomb and the Blues at those annoying pigs in your living room in glorious augmented reality. While it’s still the core Angry Birds experience – flinging birds at structures to blow up bigs – the game takes on a new perspective in augmented reality.

It allows you to physically walk around and examine the ever-more-complex structures that you have to destroy in order to progress, finding weakspots and other surprises that may give you an advantage and the coveted three-star score for the level.

There are over 40 levels available at the moment, with more to come in future. It’s completely free to download too, and although there are some F2P mechanics, these are nowhere near as aggressive as some games we’ve come across in the past.

For those that want the CoD: Zombies-esque experience on an iPhone or iPad, we present ARZombi. It’s a survival horror game where you, of course, have to protect your home from an incoming zombie invasion.

After setting the game up (placing the various windows and doors onto your physical environment), you face off against 3D zombies that break down your defences and try to eat your brains. The aim is to fend the zombies off for as long as possible by using a variety of weapons with limited ammo while repairing and strengthening your defenses.

And while that’s all about there is to do at the moment, the devs have promised future updates that’ll bring features like a story mode and even multiplayer. 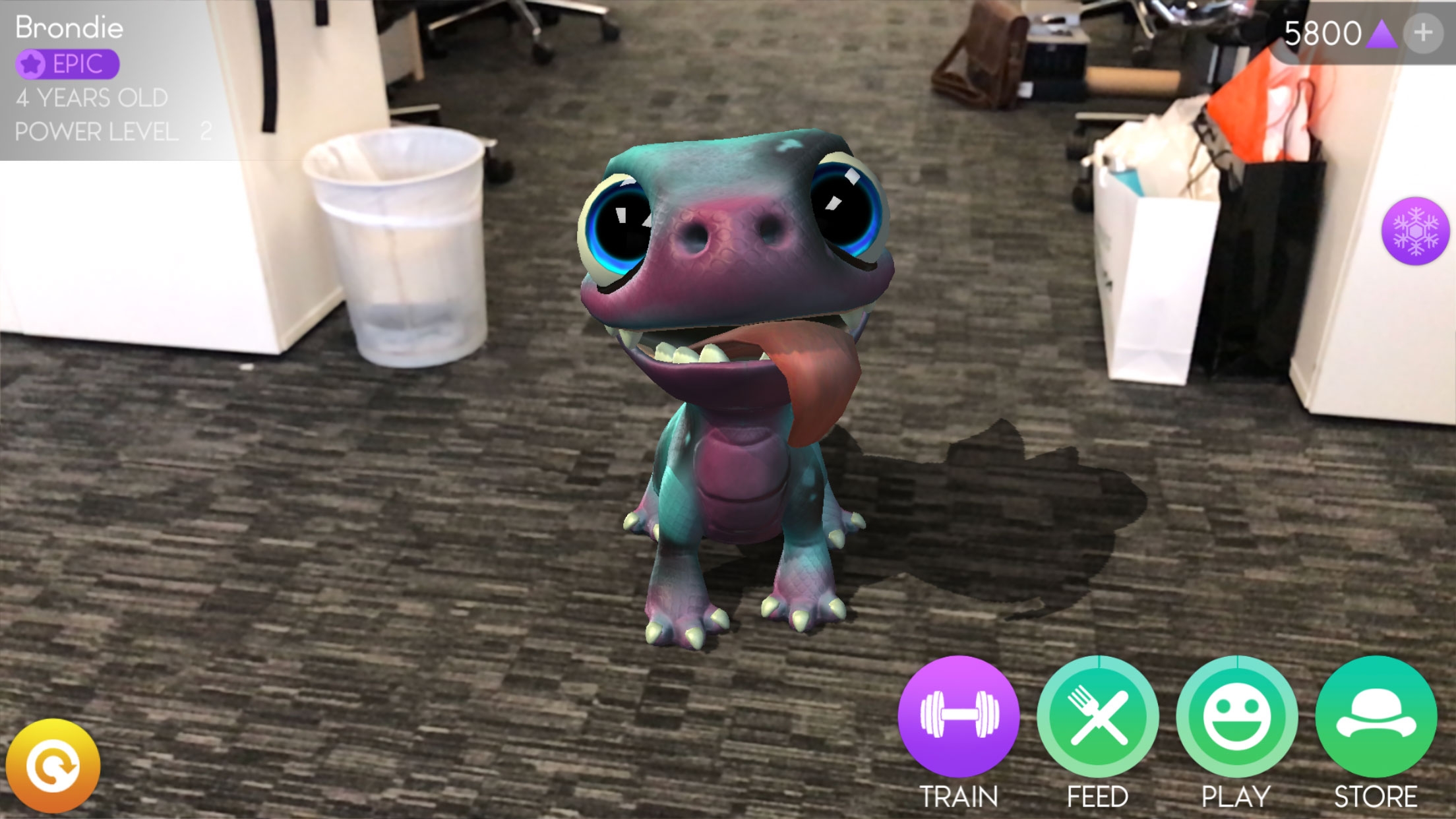 If you liked looking after your little Tamogotchi in the 90s, you’re going to LOVE AR Dragon. It’s a similar concept to the retro tech where users are tasked with looking after their very own augmented reality dragon. You’ll have to check in on it every day, feed and play with it or risk it getting fed up and flying away.

You’ll unlock new food, toys and skins as your Dragon gets older, as well as watching it grow in size from a baby to a teen and finally, to a massive dragon. It’s a fun AR experience for when you’ve got a spare five minutes waiting for the train or waiting for the kettle to boil!

If trying to remember to feed your AR dragon every day is a little much, you might enjoy Follow Me Dragon. Like AR Dragon, it features cute dragons, but these dragons have much more character. They’ll dance, jump, pose for photos, play fetch and will fly from one spot to another in your environment.

You can tweak the colour of your dragon to make it unique, and a handy in-app camera allows you to snap photos of your companion in real-world environments wherever you are. 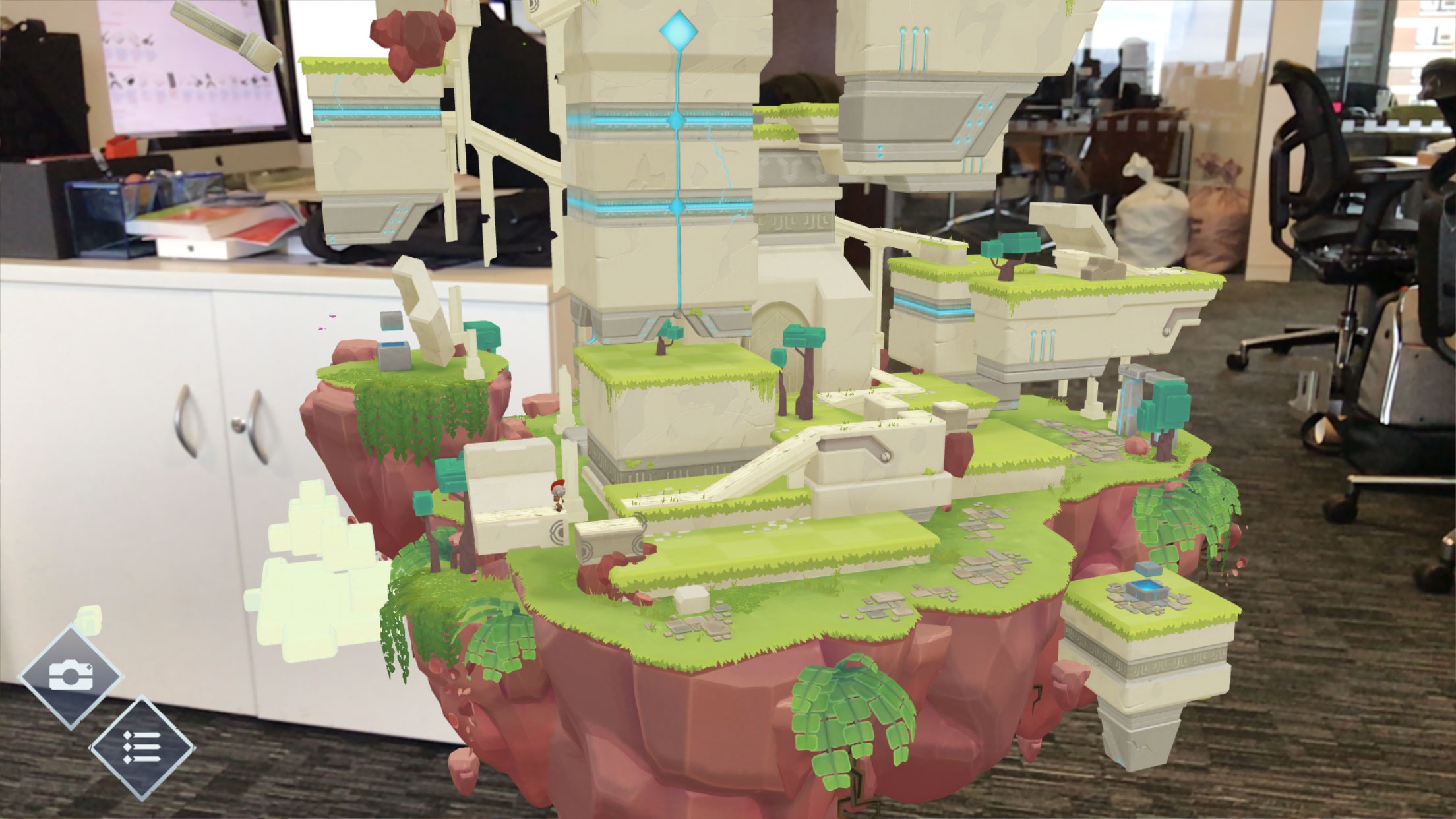 ARise is a cool new game built from the ground up for augmented reality – and it’s amazing. Think of ARise as the augmented reality equivalent of the hugely popular perspective-puzzler Monument Valley, as you guide a mini centurion around winding paths and overcome gaps by changing your perspective.

It requires you to physically move around and change the camera angle to find the correct route. There are only three ‘episodes’ available at the moment, but the developer has promised more are in the works and will be released via free updates in the coming months. 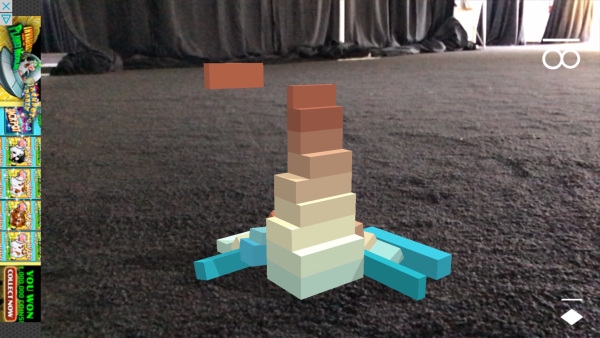 Admittedly, Stack AR isn’t going to revolutionise augmented reality games on iOS, but it’s a good way to show your friends how cool AR can be, and it’s surprisingly addictive too. It’s a basic game that allows you to stack blocks in the real world with well-timed taps of the display with the aim of creating the tallest tower possible.

Once the game is over, watch your finished tower rise from the ground below you in all its augmented glory. There isn’t much else to it, but it’s good for those new to the world of augmented reality. 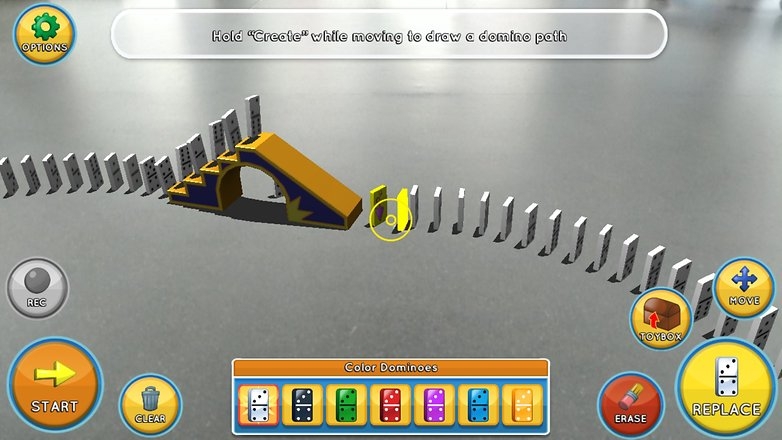 Are you one of those people that would a watch 10-minute YouTube video of an intricate domino course? Do you have the patience to create one yourself? Of course not, but with Domino World AR, you don’t need to.

The app provides everything you need to create intricate, detailed and outright crazy domino courses in your environment with little effort and no risk of prematurely knocking them over! There’s a bunch of props and toys that can be used for extra flair, with your imagination being the only limit.

It’s not for everyone, especially at £1.99, but if it was a cherished part of your childhood then it’s well worth playing. 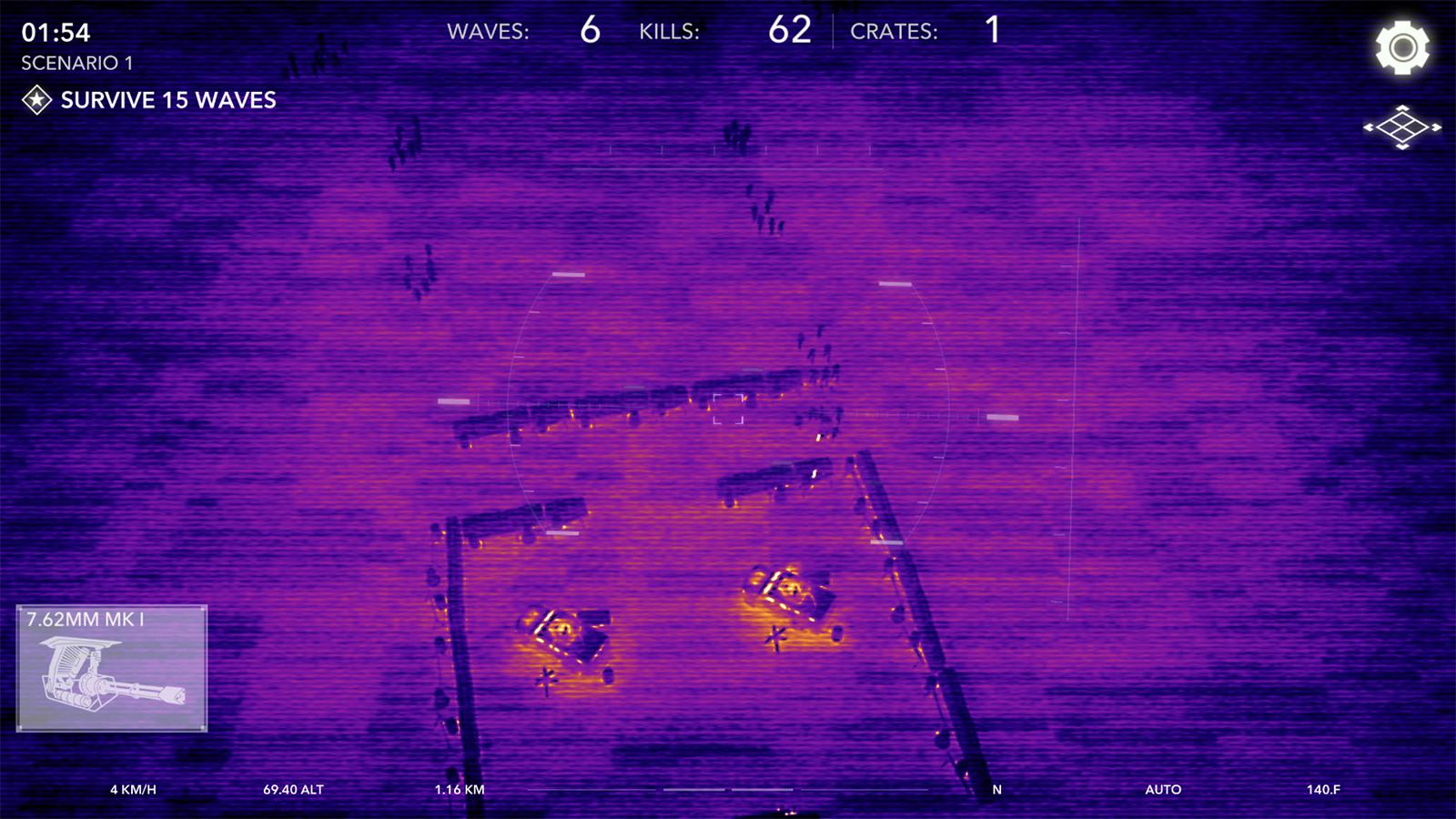 For fans of the Zombie Gunship series, we suggest the latest in the collection: Zombie Gunship Revenant VR. As the name suggests, there’s an AR mode to the game that requires you to physically move your device around the virtual battlefield to aim at and take down hordes of approaching zombies.

It adds a different dynamic as players are used to simply swiping across the map, and allows you to get as close as you’d like to zombies simply by bringing your iPhone nearer to the surface. ZG Revenant AR is one of many wave-based AR shooters currently available, but it’s one of our favourites. 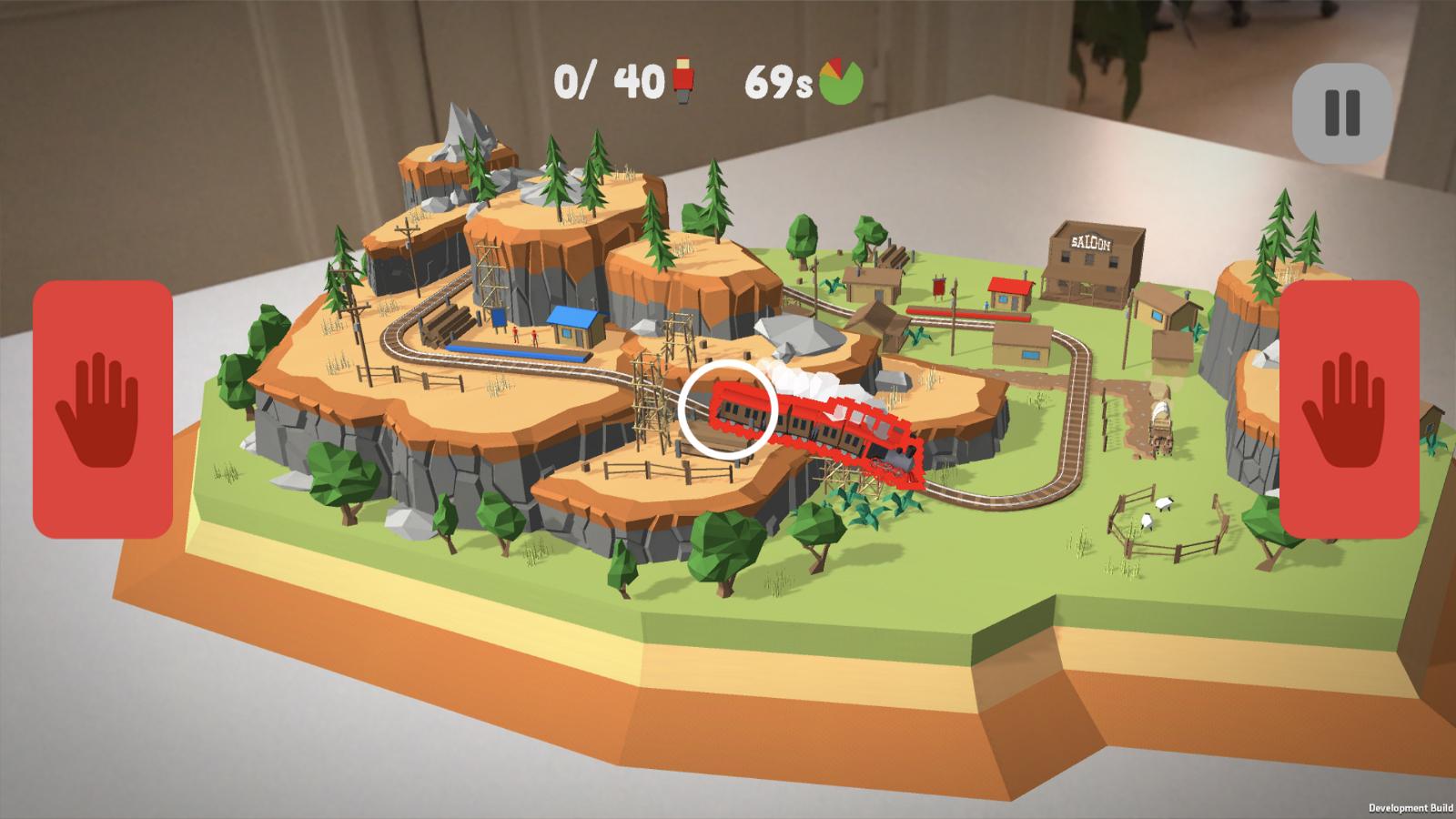 Conduct AR is a gorgeous-looking train strategy game that comes alive on your table top, tasking you with the smooth running of ever-more-complex train lines in the Wild West. The gameplay is simple enough but takes some time to master, especially in the latter levels where you juggle multiple tasks at once.

Transport passengers on time, earn stars and progress through the range of levels currently available – if you’re a fan of model trains, this might be the best £3.99 you’ve ever spent. 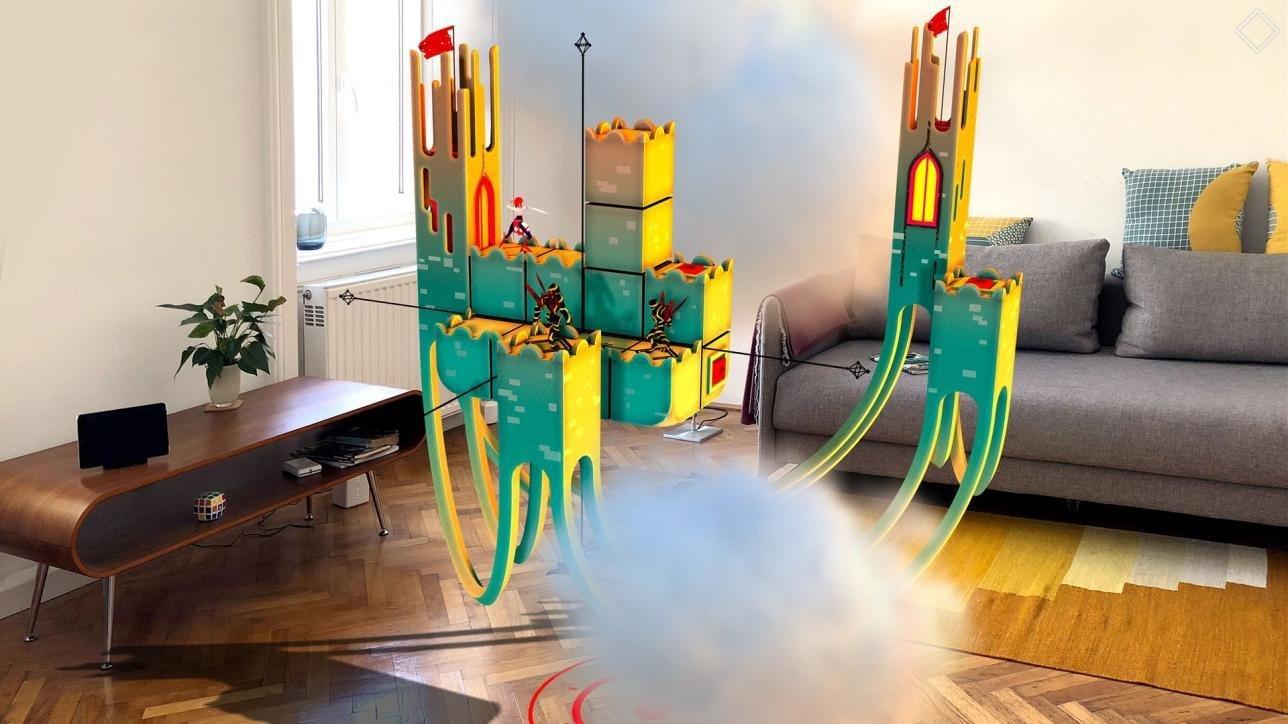 You’ll be guiding the adventurer through complex puzzles and past dangerous foes through a combination of smarts and the rotation of the levels themselves. It feels a little like Monument Valley, although the Euclidean series has a very distinctive look and feel about it.

Like its predecessor, Euclidean Skies can be enjoyed in AR, allowing you to get a new perspective on the puzzling landscape as it sits front-and-center right there in your living room.