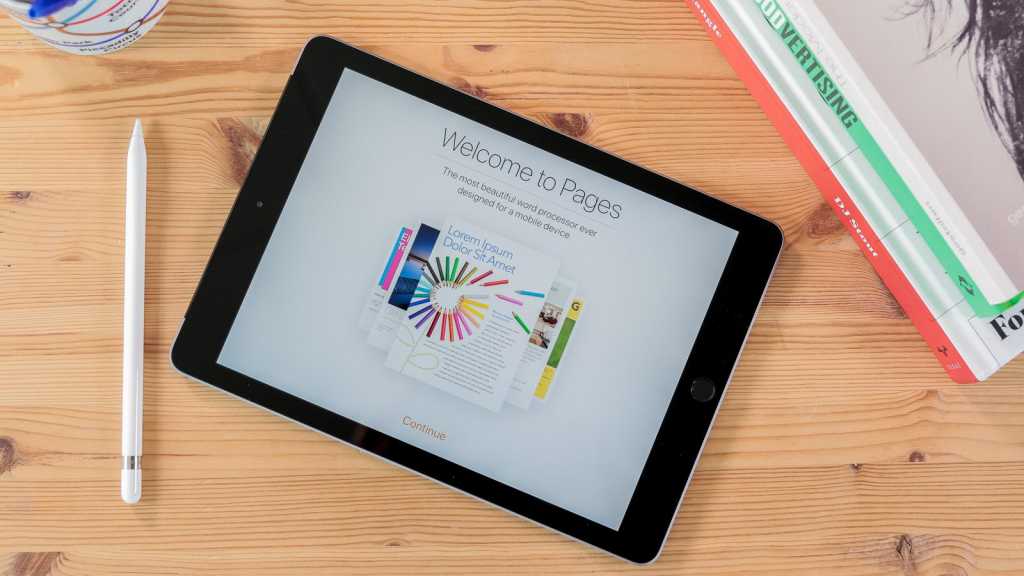 With the launch of the iPad 2018, Apple finally brought Apple Pencil support to an affordable tablet. Until this year, the best iPad stylus around was limited to the incredibly high-end Pro models.

But now that you’ve got an Apple Pencil, what do you want to do with it? This all depends on your choice of apps. Notes (preinstalled) and Pages (free to install) are a great starting point: both allow for free sketching and Pages now supports Smart Annotation, a feature that anchors your notes to a specific point in a document so they move around appropriately as you make edits.

But there are loads more iPad apps out there that cry out for stylus input, and in this article we round up the best iOS apps for the Apple Pencil. Those looking for specifically artistic apps (which are included here, alongside note-taking, document markup and even calculator apps) may also find an article by our colleagues on Digital Arts helpful. Lucy Hattersley contributed to this article. 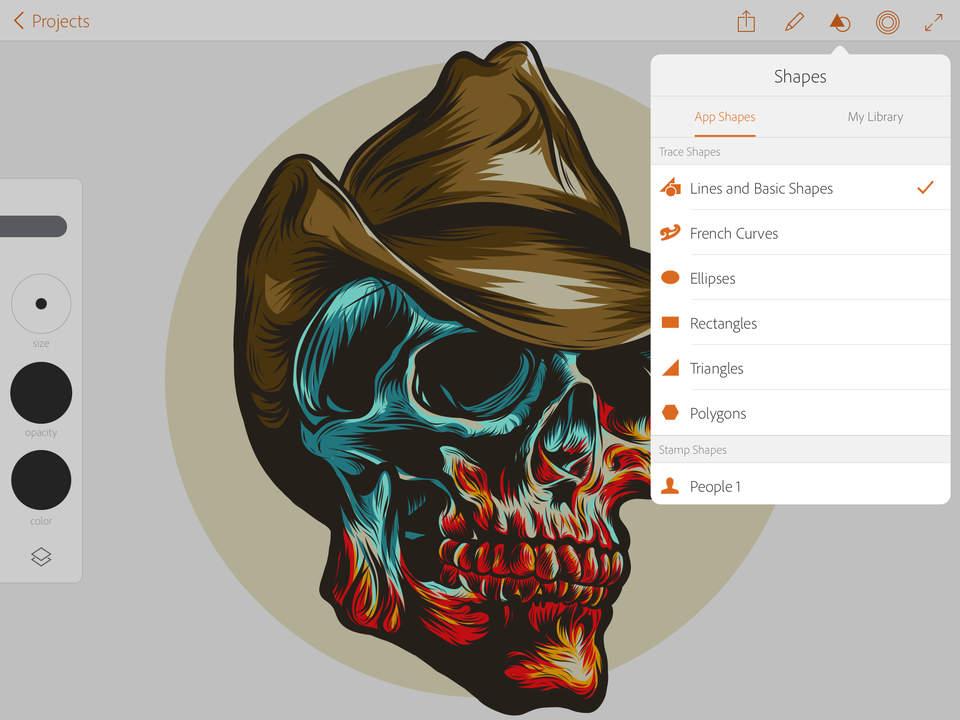 Illustrator Draw puts lots of handy tools at your fingertips which make it easier to create vector art. You can zoom up to 64x to apply fine details, and create perfect lines and curves thanks to the Touch Slide digital ruler.

The app is free to download, but note that it works best with a full Creative Cloud subscription. 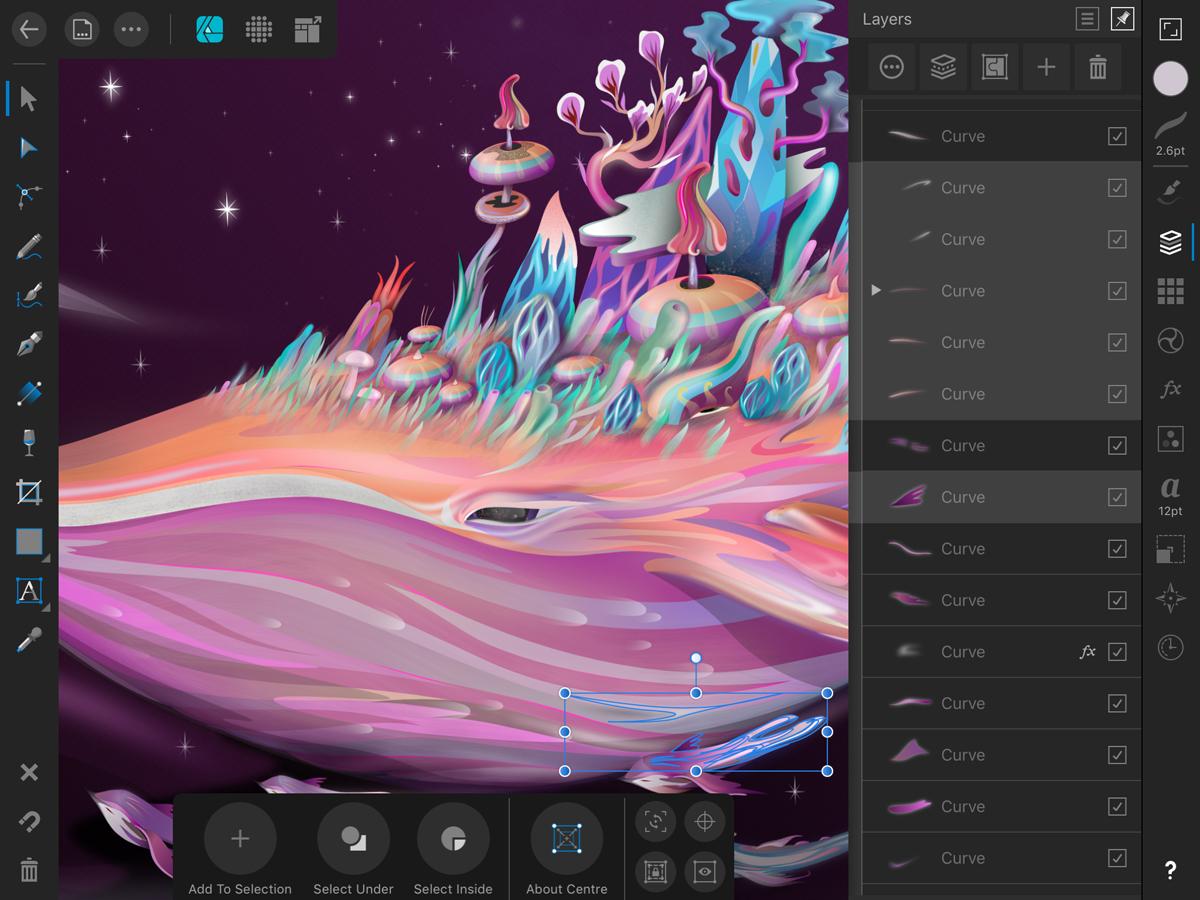 We can hardly mention Illustrator without also discussing Affinity Designer, Serif’s Illustrator killer. This popular vector graphics package has been launched on tablet and its gesture support and iOS integration demonstrate a sympathy with tablet workflows that is rarely seen in ex-desktop offerings.

Although the interface is pure mobile, the feature set remains true to the original. It supports 120fps pan and zoom, print-ready colours and bleeds, a huge range of masks and filters and deep file management and export options. It can zoom far beyond a million percent quickly and smoothly.

There is also full support for the Apple’s Pencil’s capabilities: strokes reflect the pressure you apply and the way you tilt the stylus. And optional stabilisation features will smooth your lines if you’re struggling to keep things steady (or you’re on a train).

Affinity Designer is a great and feature-rich option for digital illustrators but the price means it’s within the reach of ambitious hobbyists too. It’s compatible with the iPad Air 2 and later, although Pro models will better showcase the software’s Metal-optimised processing power. 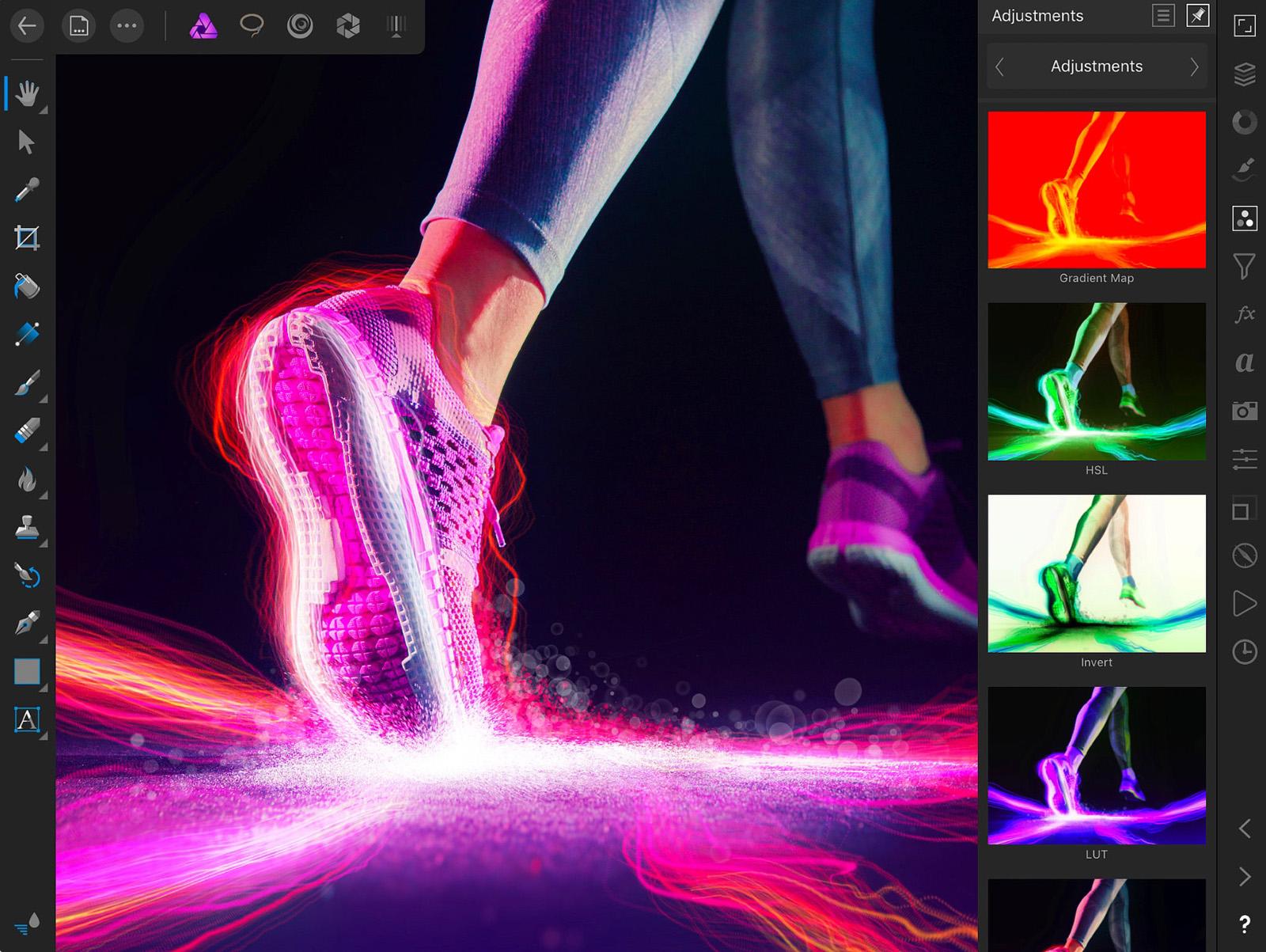 As the name suggests, Affinity Photo is primarily a photo-editing app. But it also features a wealth of digital painting tools, including more than 120 customisable brushes with control over pressure, angle, tilt and velocity via the Apple Pencil.

The app’s main strength is its interface, which is touch- and Pencil-based to its very core; but performance is excellent too. No wonder, then, that it won Apple App of the Year 2017. 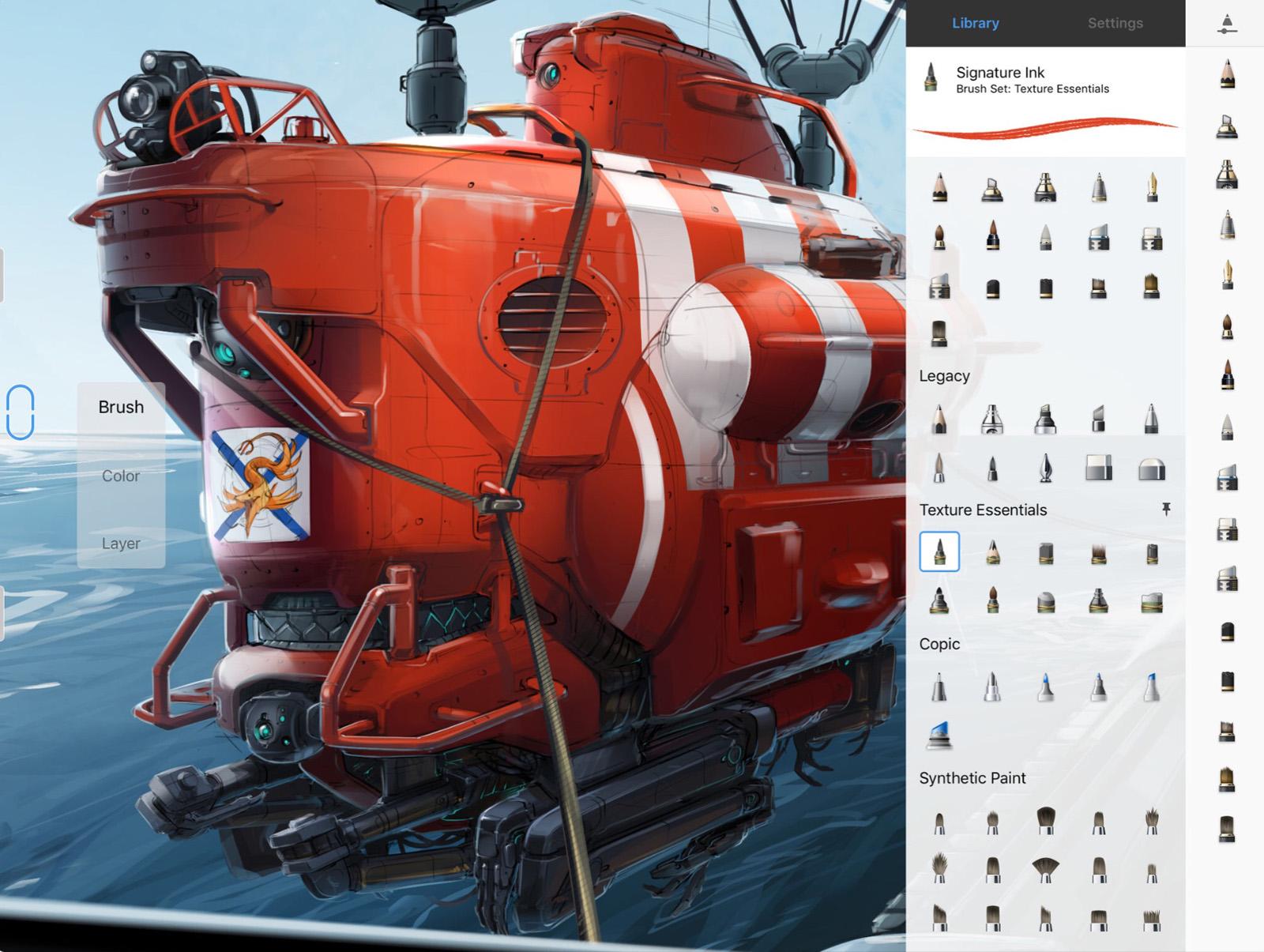 Sketchbook, an accomplished professional artist’s tool, has a wide-ranging feature set including the ability to snap-and-scan paper drawings using your iPad’s camera.

There are more than 190 customisable brushes for those who like to paint, while those working in more geometric forms will appreciate tools such as ruler, ellipse and radial symmetry. 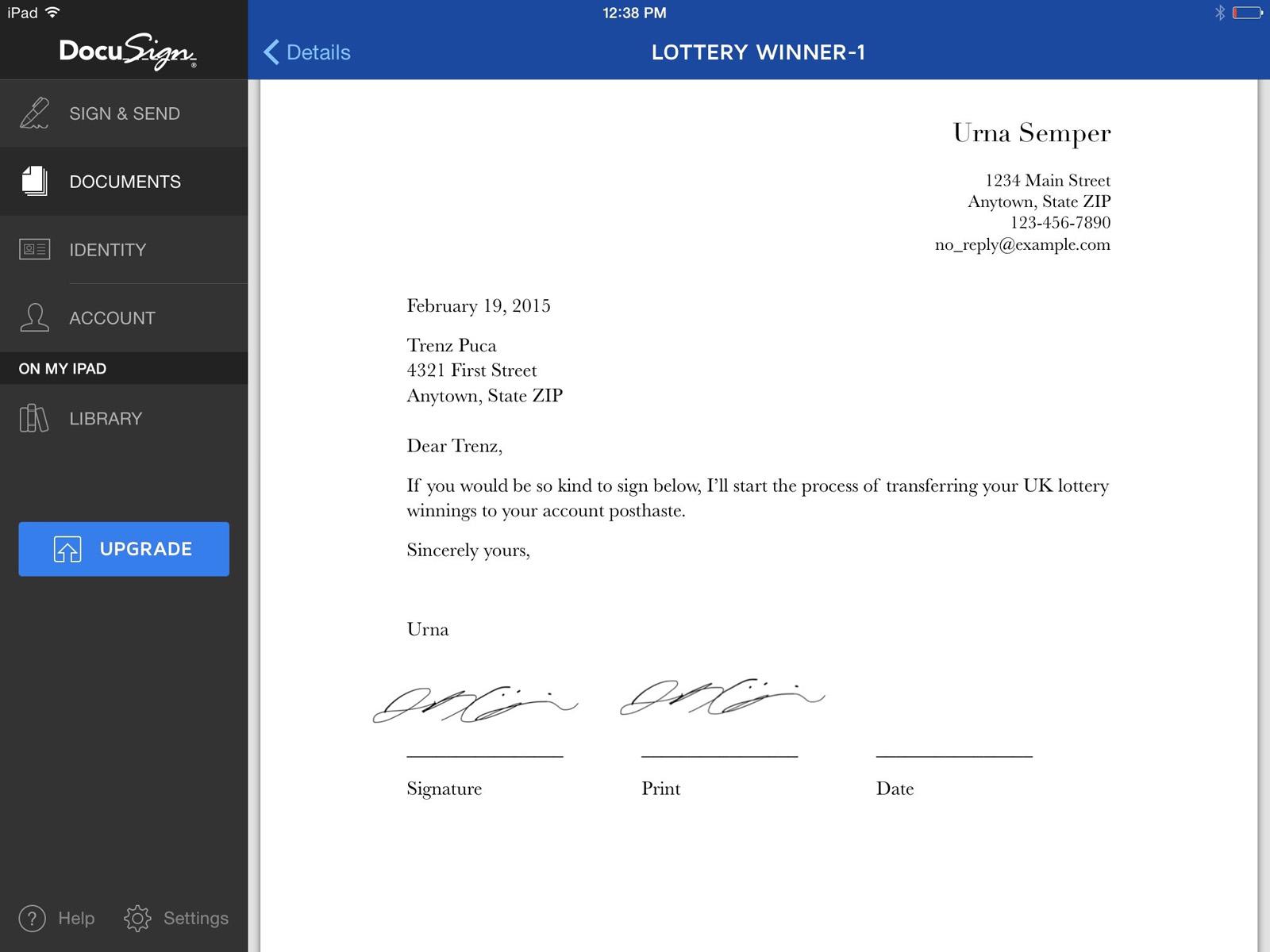 Printing, signing, scanning and emailing important documents can bring a morning’s productivity to a screeching halt. Which is why an app like this is a godsend.

With a few swipes and taps you can place your initials and signature on a document and send it back without ever leaving your desk. And by choosing not to print out lengthy contracts, you do your bit to save the planet too. 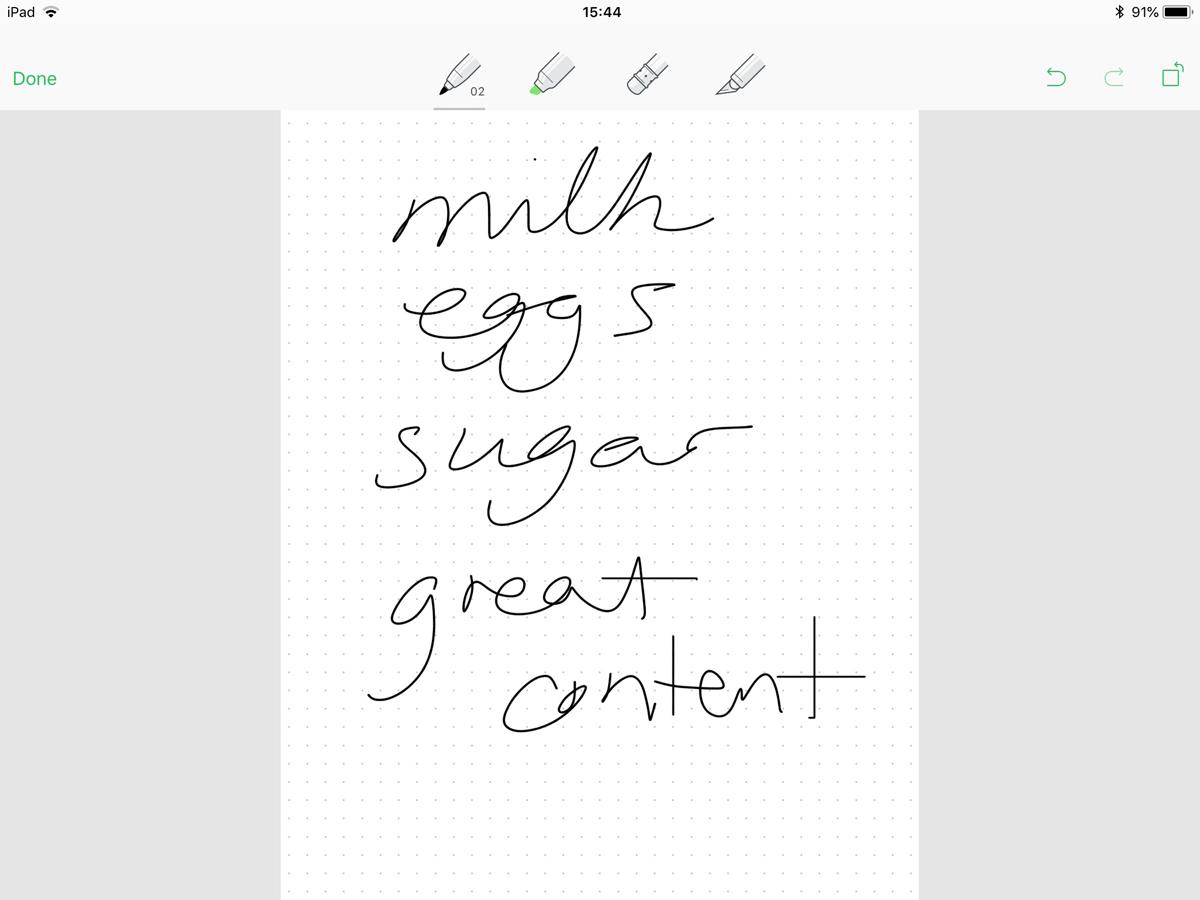 Evernote is a perennial favourite on business lists, and when you start using it, you’ll soon discover why: the ability to collect notes from anywhere, on almost anything, soon works its way into your life.

But Evernote has really come to life on the iPad thanks to the Apple Pencil, and the ability to add sketches to notes is invaluable. 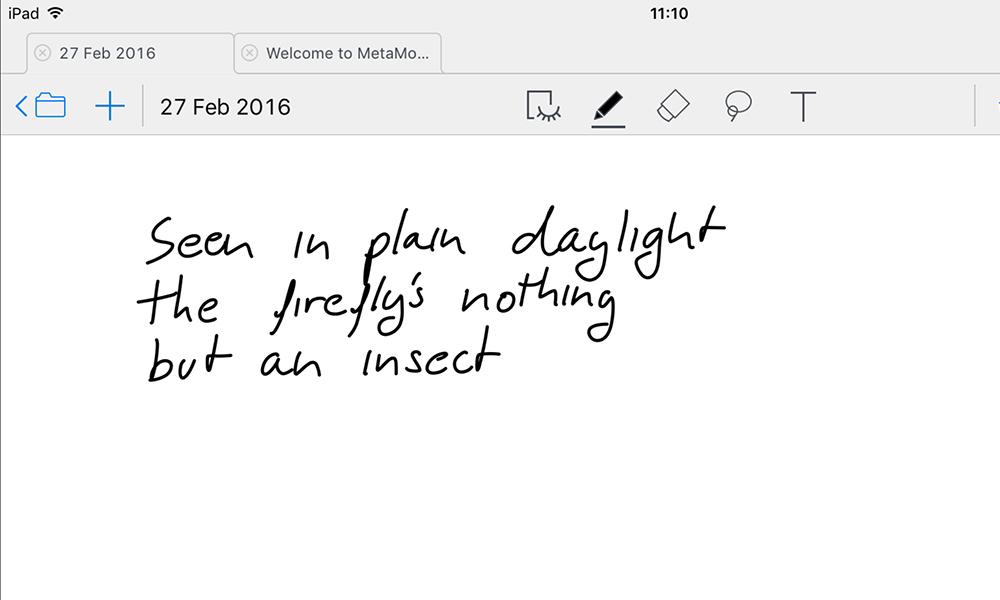 This lesser-known app for handwritten notes has an interface that reminds us of a web browser, with tabbed notes along the top. The toolset is basic, but you can quickly access different coloured strokes and a highlighter.

It’s very good at handling multi-note documents, and you can add additional notes using a sidebar. It also allows you to change the document’s paper to graph or lined, while a gold service allows you to download user-generated paper collections.

This is all quite interesting because on the surface it seems basic, and you only start to discover how detailed it is during prolonged use. Well worth an explore. 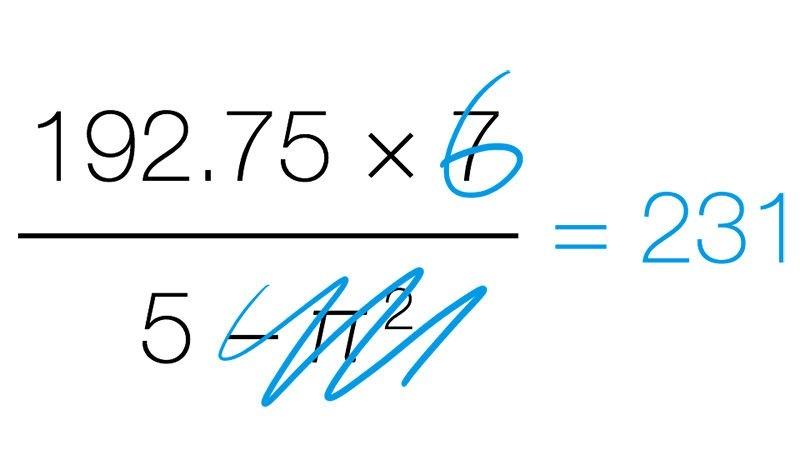 Unlike the iPhone, the iPad doesn’t have a built-in calculator app. Never mind! There are lots available on the App Store.

MyScript is a favourite of ours because it enables you to draw your calculations on the screen, as if you were sketching them out on paper. Then it magically arranges the numbers and does the maths for you.

( Calcbot is the calculator app to get if you really want something more traditional, by the way.) 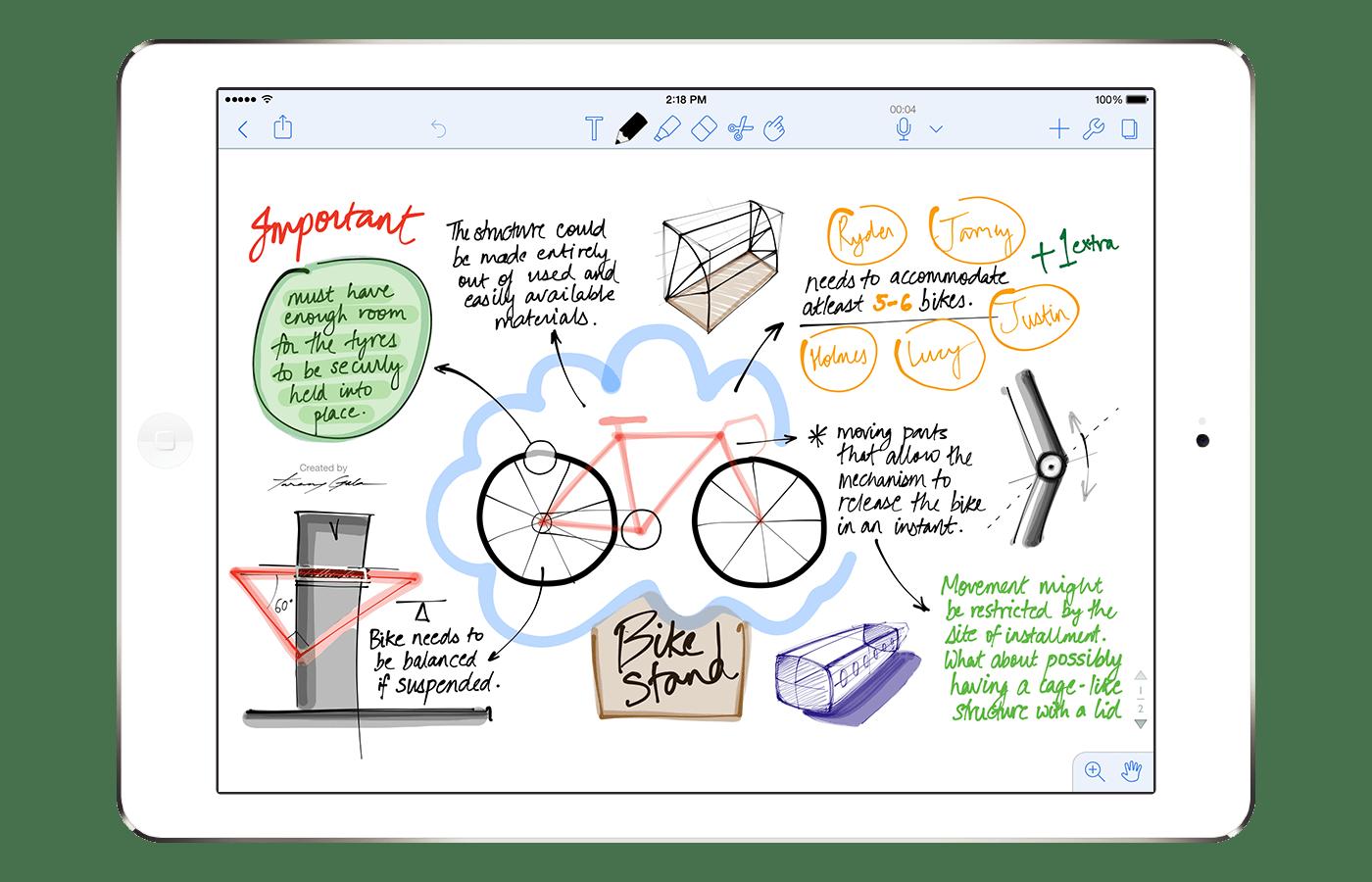 If you’re looking for an app that’s like Notes, but just a bit more powerful, Notability is the one to go for. It enables you to quickly jot down ideas and doesn’t overwhelm.

We rather like the ability to draw figures in a large, separate window and add them to graphics (which can be resized and moved). Notability also supports Apple’s Split View mode, so you can use it alongside other apps.

It’s less fussy than Penultimate, although not as quick and easy as Paper. On the whole it’s a grand choice for those looking to recreate the experience of writing on a notepad. 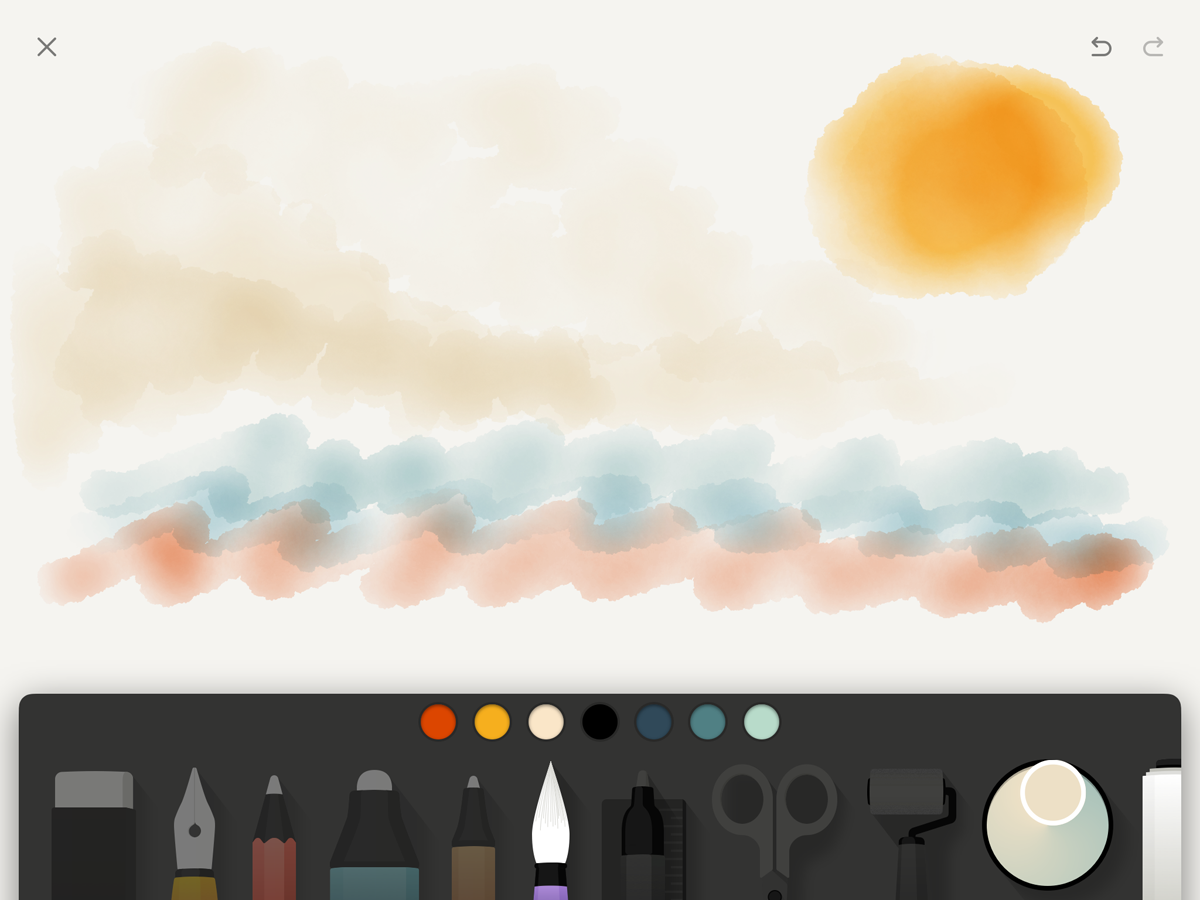 Originally designed to work with FiftyThree’s Pencil, this app has taken a wider lease of life since the Apple Pencil arrived.

Paper shares some of Notes’ limitations: you can’t expand the single sheet of notepaper, for instance. But it has a much nicer selection of drawing tools. You can pick any colour you want, and create documents with lined and graph paper.

You can also use FiftyThree’s stylus with this app, and many more. Here’s our rundown of the best styluses for iPad, if you’re considering a non-Pencil choice.

PDF Expert makes it easy to sketch over PDFs, add notes and highlights, and approve or reject design changes. It’s yet another area where having the Apple Pencil makes a real difference.

If you have to work with PDFs, this is the app to get. 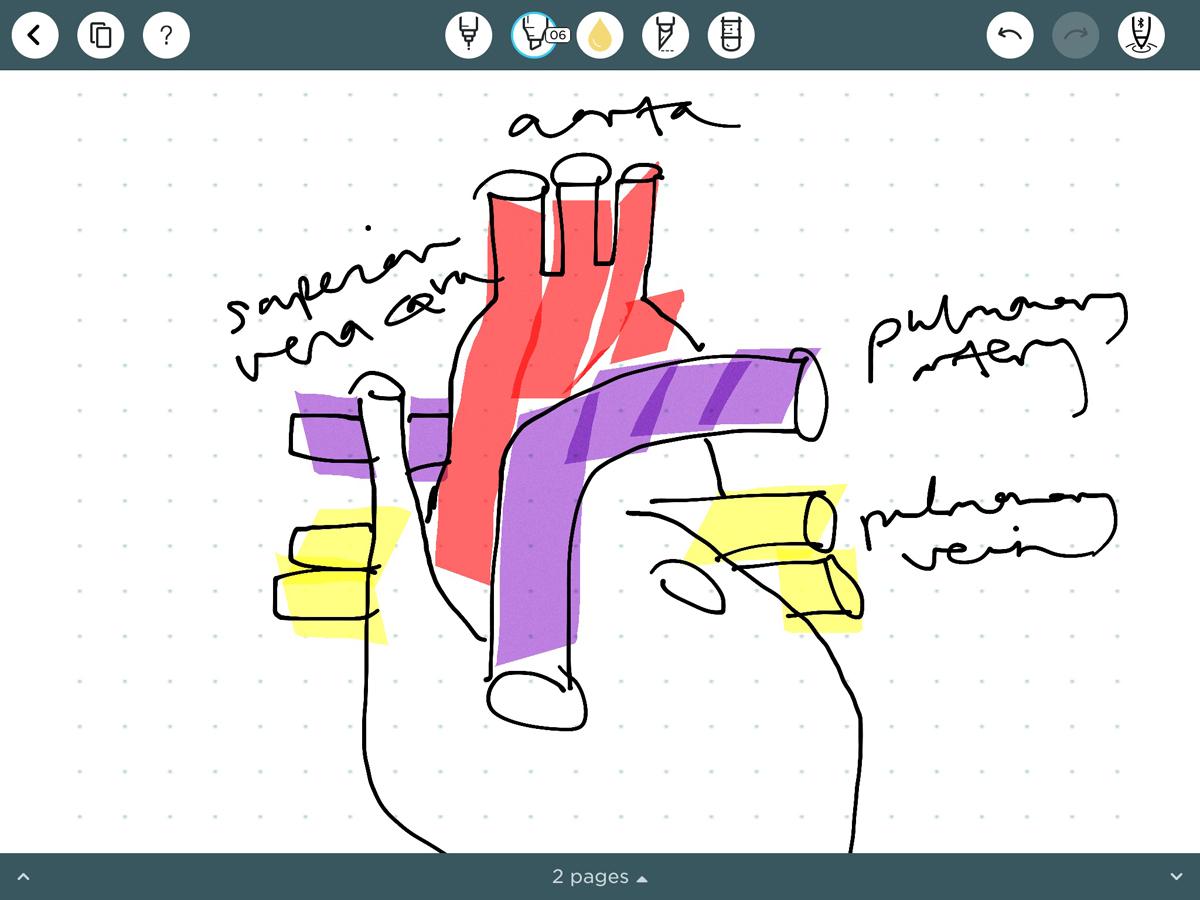 Penultimate is integrated with Evernote, allowing you to create handwritten notes that are searchable within Evernote itself. We also like the way you can quickly add additional pages to your notes, and choose from a wide range of lined, graphed, dotted and pre-formatted sheets, such as a To-Do list or Day Planner.

Penultimate is an immensely practical offering: a solid choice for those who take lots of notes in a professional setting. 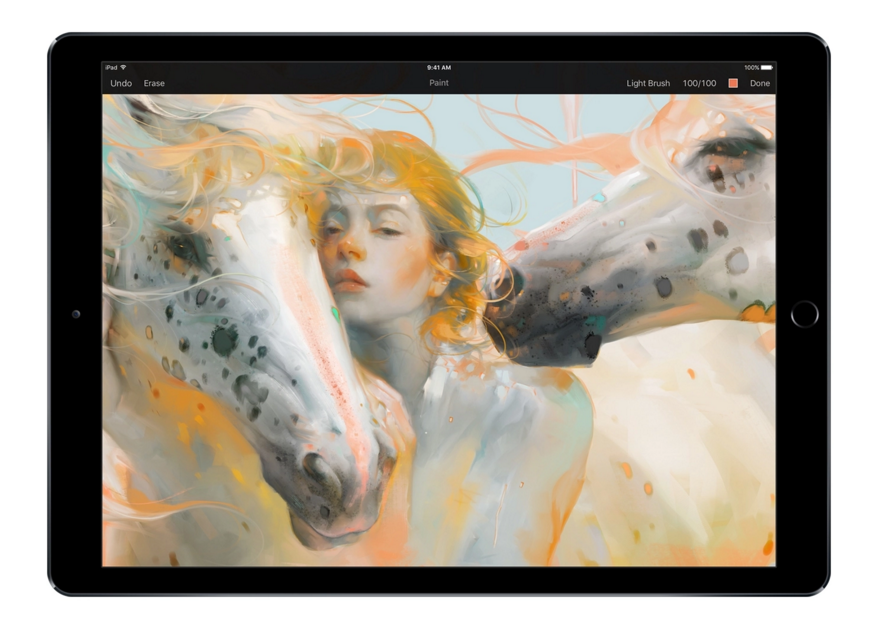 Like Affinity Photo, Pixelmator is a photo editor at heart, but also comes with painting and graphic design features.

When sketching and painting, you can choose from more than 90 brushes (including double-texture brushes), watercolours, and the pixel brush. 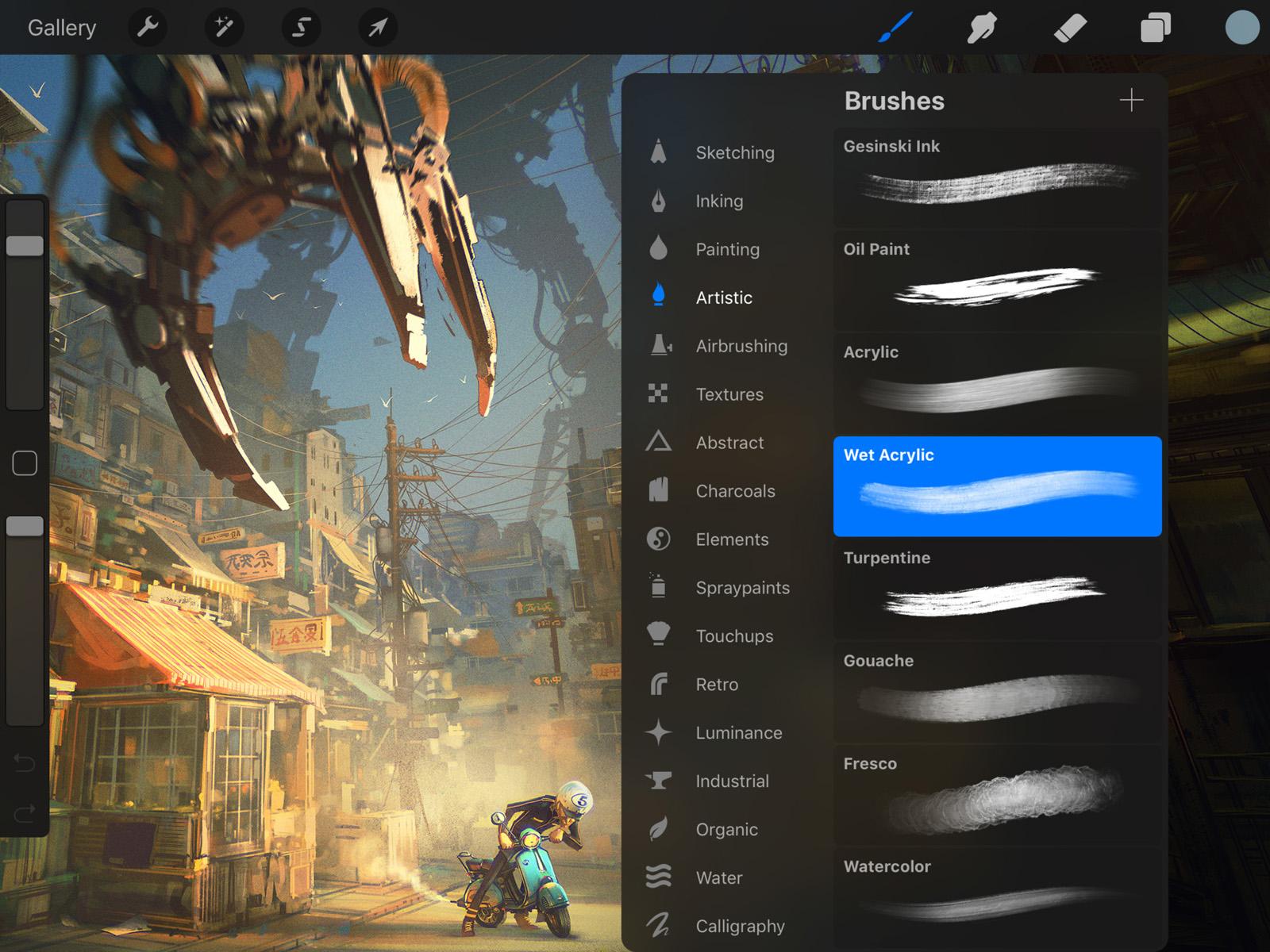 This popular choice, which has won the Apple Design Award, lets artists paint, sketch and draw using over 130 brushes, and even create their own. It can generate massive canvasses and work across multiple layers, and supports both 64-bit colour and multi-touch gestures.

Procreate 4 saw the introduction of the Silica M painting engine, which uses Apple’s Metal graphics platform and makes the application more responsive when applying brushstrokes. The interface was also redesigned to be easier to use.

Our colleagues on Digital Arts have a Procreate tutorial for those who wish to know more.