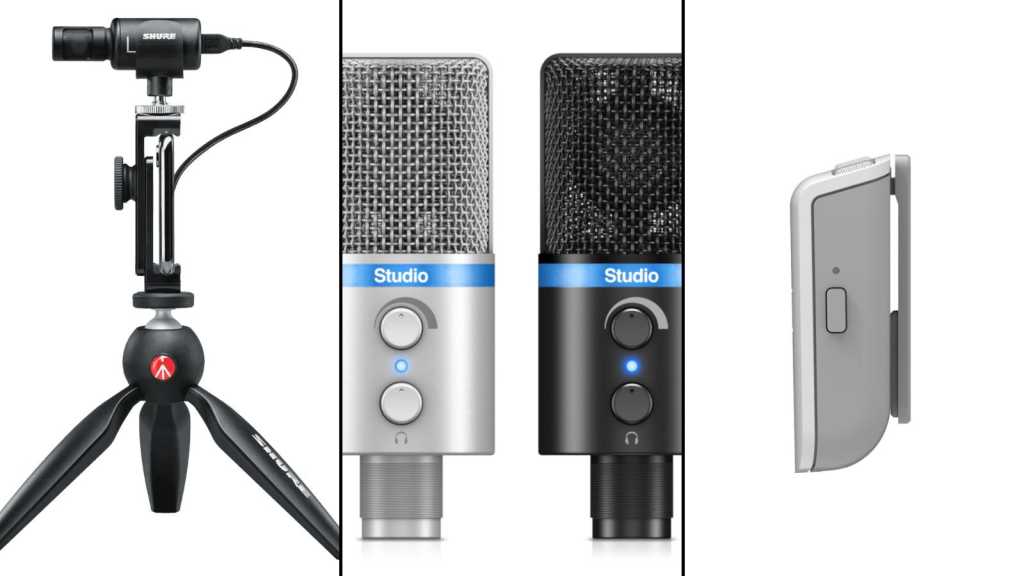 It’s possible to do more with your iPhone than ever before – from producing home videos to shooting professional shorts, podcasting, or even creating content for YouTube. But there’s one common shortcoming: the built-in microphone. Time and time again, users find that their iPhone’s mic simply isn’t up to scratch and they’re left searching for a third-party alternative.

Fortunately, there are plenty of iPhone-compatible microphones on the market. In this article, we’re going to round up the best – we’re looking at mics both expensive and cheap, for podcasters, YouTubers, and everyone in between. For broader thoughts on the features and qualities to look for, jump down to our iPhone mic buying advice. 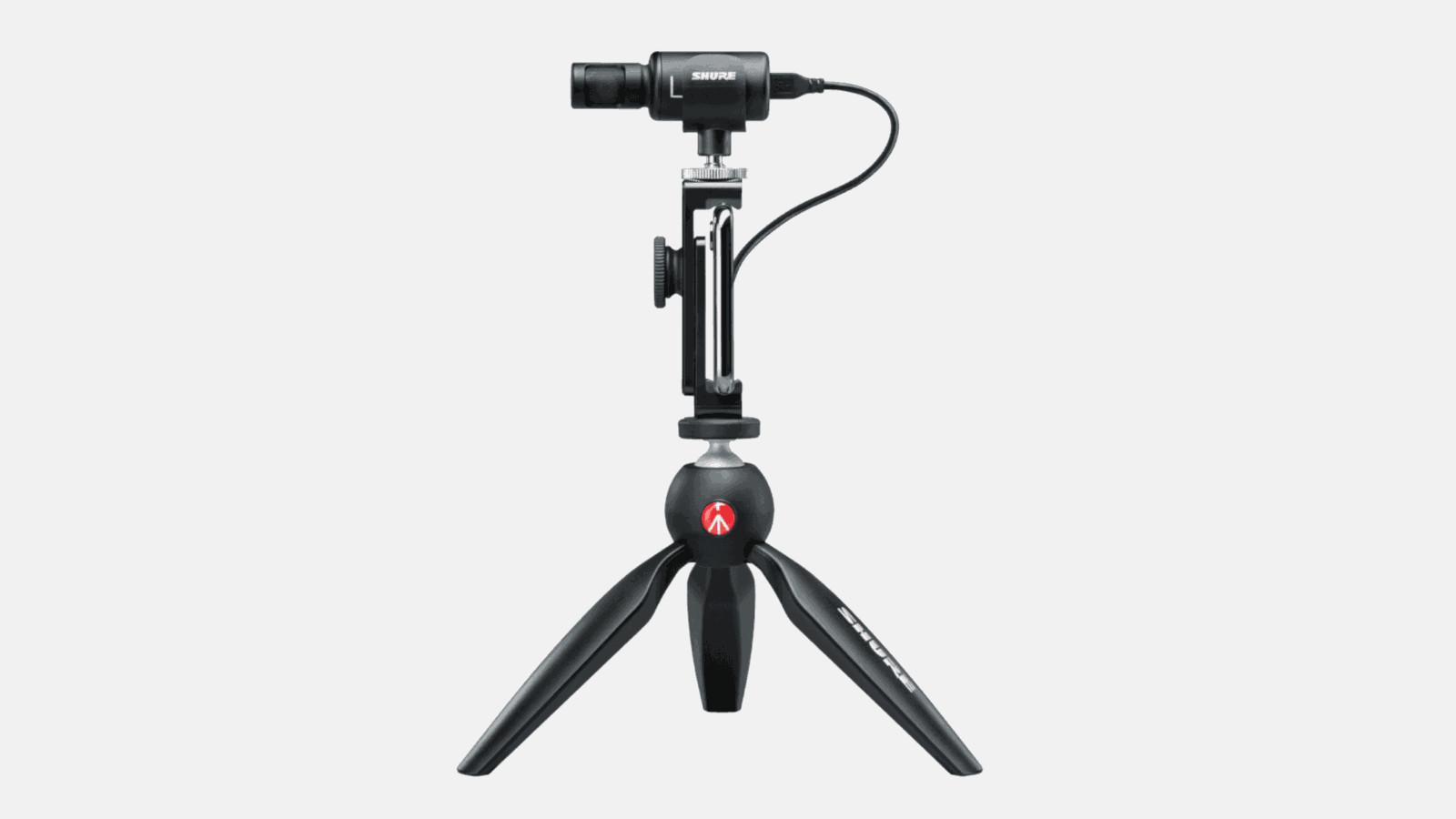 Shure’s MV88+ Video Kit is an impressive piece of hardware for budding filmmakers and amateur videographers alike. It consists of a digital stereo condenser microphone, a Manfrotto PIXI mini tripod, and a range of clips and wires. You get what you pay for with this mic: it’s a premium kit at a premium price.

Make no mistake: the microphone’s sound quality is excellent. For starters, a foam windscreen (included with the kit) makes it possible to capture impressive audio outdoors, even in windy conditions. Because the MV88+ has a frequency response of 20Hz to 20kHz, you’ll find that the microphone picks up detailed stereo capture regardless of the audio source. In our testing, it handled spoken word and music capture equally well.

Part of the reason for this flexible functionality is Shure’s impressive MV88+ apps. On iPhone, you can use these to fine-tune the microphone to provide the best possible sound for your present environment. In both Shure’s audio- and video-recording apps, you can switch between DSP presets like Speech, Singing, Acoustic and Loud. You can also change the gain and stereo width to ensure you get the perfect capture first time.

Recording is also assisted by the MV88+’s smart mic-clip and the Manfrotto PIXI tripod. The clip works really well, allowing users to arrange their microphone for audio or video capture in portrait or landscape.

And the tripod – well, it’s the finest iPhone tripod I’ve ever encountered, hands down. It’s well built, holds the iPhone securely, and makes arranging the iPhone (and MV88+ mic) a breeze thanks to its tilt button.

If you’ve been searching for a premium iPhone mic that pretty much does it all, look no further. Shure’s MV88+ Video Kit is the product we’d recommend. 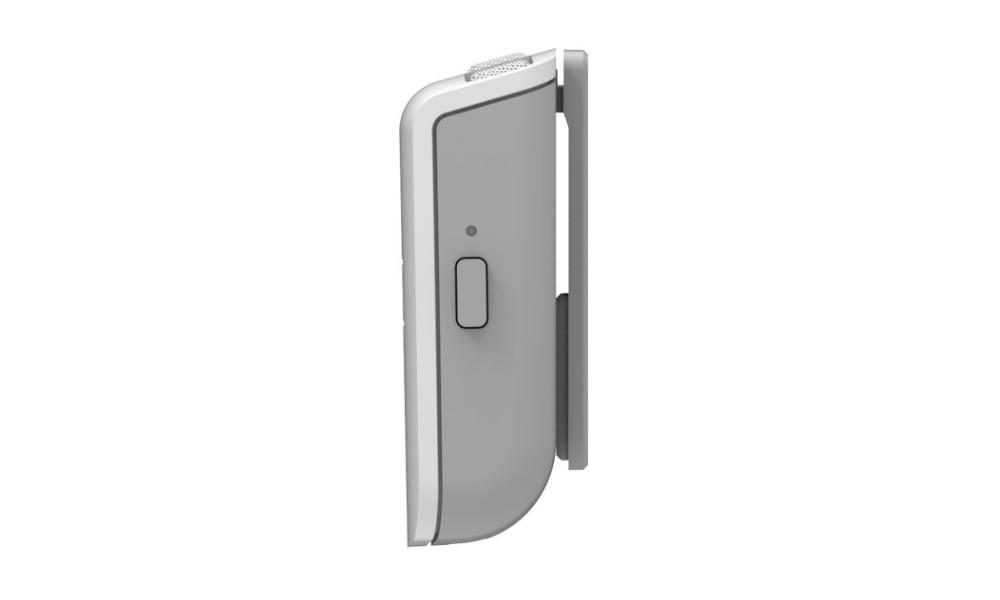 Sennheiser’s Memory Mic is a clip-on ‘lapel’ microphone that can wirelessly capture perfect audio for your iPhone-shot video. It’s a great option for folks looking to create engaging video for online platforms like YouTube.

Without doubt, the Memory Mic offers users more freedom than any iPhone microphone I’ve encountered. That’s because Sennheiser’s mic clips on to your collar and lets users capture audio wirelessly with an infinite range. The mic doesn’t maintain a Bluetooth connection; instead, it stores the audio locally, on the microphone itself, and then syncs the audio and video together once the recording is complete.

True, the sync process is somewhat laborious – Sennheiser’s mic creates a local wireless network and uses this to transfer the audio using its free companion app, which guides you through the whole process. However, though a little clunky, synchronisation takes all of 30 seconds and works pretty seamlessly – provided you keep the Memory Mic and your iPhone close by one another. (If you don’t, you could lose your audio forever.)

And this clunkiness is undoubtedly worth the effort. Capturing video using Sennheiser’s Memory Mic results in crystal-clear audio regardless of how far away you are from your iPhone.

It’s perfect for long-distance shots, and works particularly well for shots where you walk towards the camera – because the Memory Mic is capturing the audio, your levels will remain consistent throughout the entire shot.

Add to all that a sleek magnetic clip and four hours of recording time, and what you’ve got is a near-perfect wireless lapel mic for iPhone. The only downside is that Sennheiser’s Memory Mic is on the chunky side, so discreet positioning may be in order. 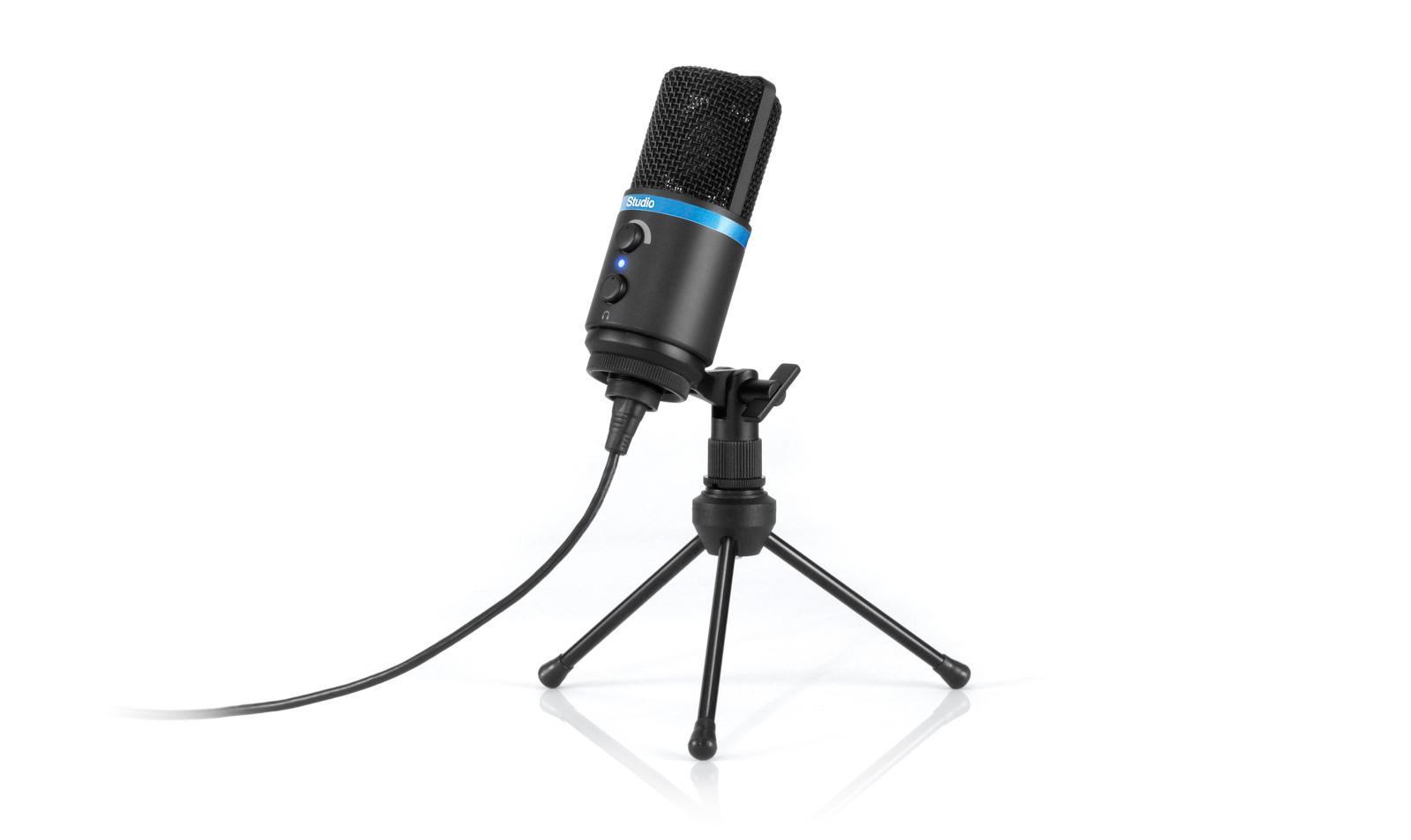 When it comes to sitting down and putting together a new podcast, or even recording some music at home or in the studio, IK’s iRig Mic Studio has you covered. It’s a large-diaphragm digital condenser microphone that’s capable of capturing rich, full audio across a range of indoor environments. And of course, thanks to IK’s suite of apps, it works a treat with the iPhone.

The iRig Mic Studio really is a professional studio microphone: it looks and feels the part. The mic itself features a 1in back-electret condenser capsule, a low-noise, high-definition pre-amp, and a 24-bit converter with a 44.1/48kHz sampling rate. All of this combines to capture impressive, rounded audio whether you’re dealing with quiet spoken word or amplified musical performance.

On top of all that, there’s an integrated headphone outlet, so you can monitor levels in real time using a separate pair of earphones or headphones. And an onboard multicolour LED indicator provides live feedback, giving performers an indication of how well the microphone is picking up their sounds. The mic also includes a gain control dial and a headphone level control for quick-fire tuning outside of the companion app.

When it comes to recording, the iRig works with the full suite of IK iOS apps. It also ships with a small-sized, portable tripod stand and is great for desktop use.

Do bear in mind that this is a wired mic, and one that isn’t suited to on-the-move recording. However, connectivity options are great: it ships with Lightning, micro-USB and USB cables, meaning users will be able to hook up to a range of devices in a flash (including their iPhone).

If you’re most interested in indoor recording for podcasts, video narration and music, you won’t be disappointed with IK’s iRig Mic Studio. It’s a great iPhone-compatible microphone. 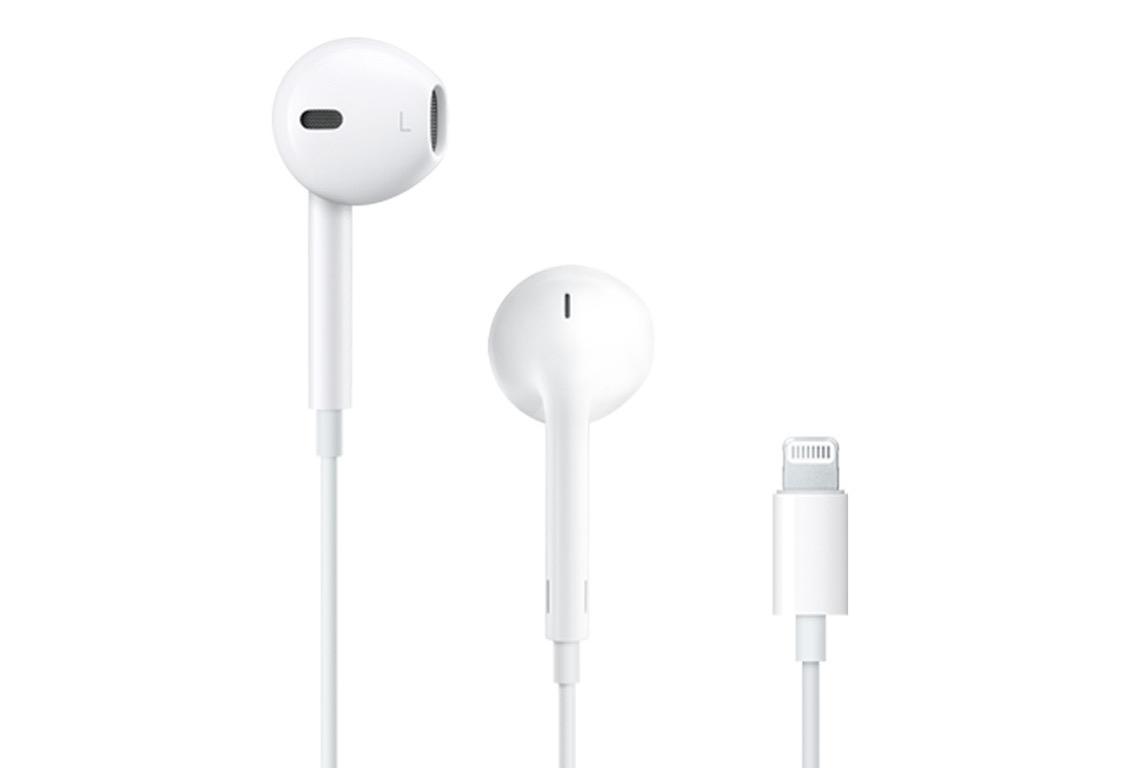 Of course, if you’re just starting out in the exciting world of iPhone-powered video production or podcasting, you may not want to shell out a couple of hundred on a brand-new mic. Instead, consider taking Apple’s Lightning EarPods for a spin – you’ve probably got a pair lying around, or hidden in the back of a drawer. But did you know they feature a built-in microphone?

Granted, the sound quality might not be the highest standard, but for the price, Apple’s EarPods do a decent job of capturing audio for videos recorded in the default Camera app. You can also launch Voice Memos to record spoken word, or record directly into GarageBand.

The EarPods will struggle in windy conditions or with audio which is loud or amplified – it’s not a great option for musicians because of this. And unless you’ve got a pair of Apple’s wireless AirPods, the EarPods will need to remain tethered to your iPhone, which will limit their use.

However, the EarPods provide a great place for any budding podcaster or videographer to start. If you don’t have a pair lying around at home, they’ll set you back $29 / £29 / A$45 from the Apple Store.

Finding an iPhone mic that’s right for you

Your perfect iPhone mic will depend greatly on what you intend to use it for, so let’s break that down here. The main points to consider are indoor versus outdoor use, and whether you need a wireless mic.

If you’re hoping to shoot outdoor footage – whether for YouTube, family home videos, or a pro filming project – you need a mic that can hold up in windy conditions. Select one that ships with a windbreak, like Shure’s MV88+ reviewed above. You’ll be amazed how even the slightest bit of breeze can affect a video, and surprised at how much a decent windbreak can help.

On top of that, if you’re thinking of shooting outdoors, the chances are that portability will be a big factor.

You could consider a wireless microphone – the Sennheiser reviewed above does a great job of capturing audio wirelessly and synchronising it back over with your iPhone-captured video. Because of this, you have unlimited range – far more than a Bluetooth microphone could ever achieve.

However, some wired iPhone mics use creative clips and fastenings to turn your iPhone into a true digital camcorder. Shure’s MV88+ is an example of this: the microphone can be attached to the iPhone and angled so that it’s pointing at the subject you’re recording.

The last point to consider for outdoor recording is whether a lapel mic is a must-have or not. Lapel microphones clip on to your collar, allowing you to capture clearer, crisper audio.

The problem, though, is that a lot of iPhone lapel mics on the market are wired: the Sennheiser Memory Mic is a rare wireless example. However, wired lapel mics bring their own challenges, and may be best avoided.

Recording at home or in the studio

So much for outdoor jobs. But recording at home or in a studio is a different beast entirely.

For this, you want something that’s more static and higher-spec. A mic with a decent preamp and condenser capsule, for example, is worth investing in.

For serious users, it would also be smart to choose a mic that features onboard controls for quick-fire adjustments in the studio. While companion apps are generally feature-rich and provide access to a range of settings and options, making changes to aspects like gain can be a fiddly process. It’s much easier to have a dial on the mic itself, in case those levels become skewed.

Your mic, your choice

The bottom line, then, is that it all boils down to what you intend to use your iPhone-compatible mic for. Something like Shure’s MV88+ is a stellar all-in-one option, but it comes with a steep price tag. There are more affordable options on the market, but these will invariably limit what you can achieve.

Whether you’re an amateur filmmaker or a wannabe podcaster, there are great iPhone mics out there – you just need to be sure that you’re choosing the right one for your requirements.