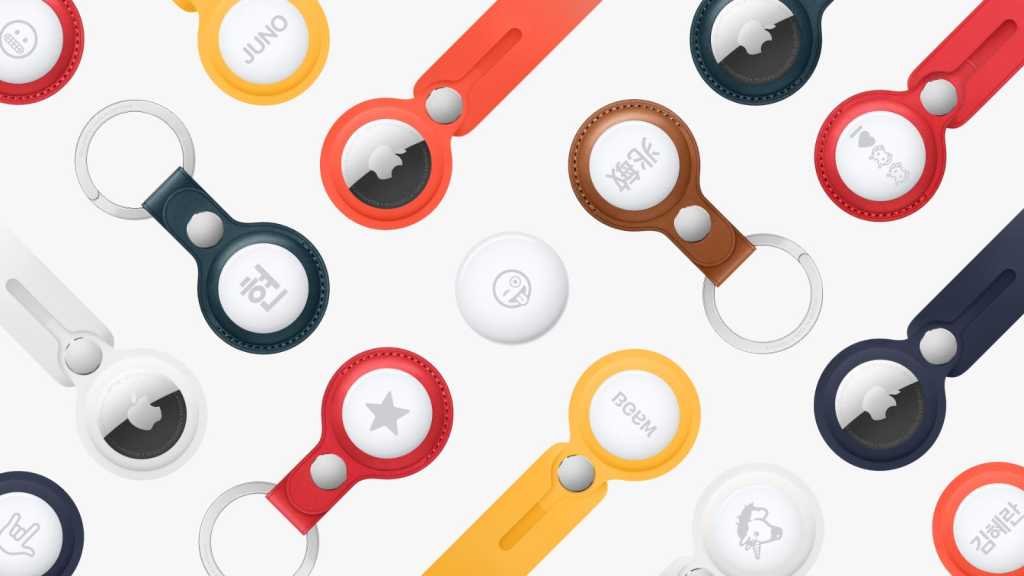 Apple unveiled its AirTags object tracker at the April 2021 Spring Loaded event, giving users the chance to find their keys, pet, or even vehicle in Sainsbury’s car park by using the tracking device and the expanded Find My network on their iPhone.

Priced at £29/$29 each for one, or £99/$99 for four, AirTags will be a tempting purchase for many people, but what other similarly capable products are available? Here’s our roundup of the best Apple AirTag alternatives looking at how they compare to Apple’s AirTag. 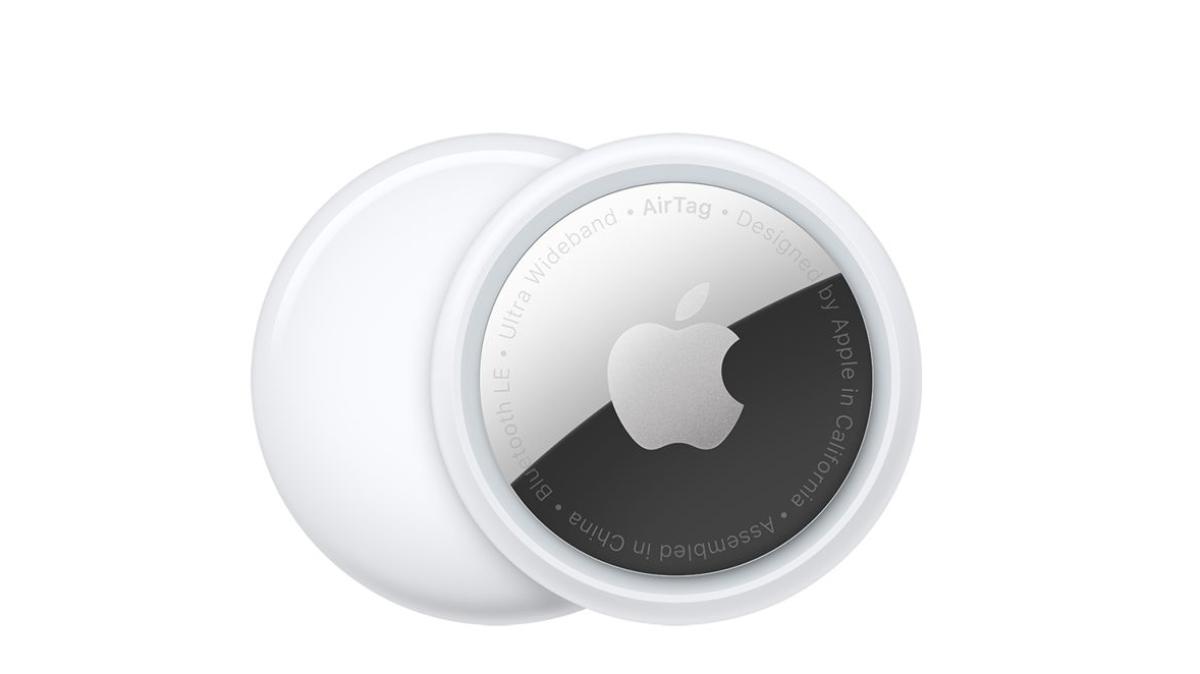 Before we head into the alternatives, it makes sense to look at Apple’s tracker.

Apple pulled back the covers on the AirTags at the Spring Loaded event, alongside new iMacs, iPad Pros and an updated Apple TV 4K.

The circular tracking device features a silver finish emblazoned with the Apple logo, all of which is encased in a white plastic surrounding edge. It’s powered by a standard CR2032 battery that’s, unusually for Apple, user replaceable and which should deliver around a year’s worth of charge.

An IP67 rating means AirTags will be able to survive immersion in water for a depth of up to one metre and for a maximum of thirty minutes.

AirTag uses Bluetooth to send out its signal to your iPhone, so you can know it’s location. If you have an iPhone 11 or later, then you’ll be able to utilise its Ultra Wideband technology to use the Precision Finding feature that will guide you directly to the AirTag rather than giving you its general vicinity.

One concern with trackers is the ability for people to track you, but Apple is making a big deal of the privacy features it has built-into AirTag to stop this from happening. Essentially if an AirTag is away from the managing iPhone for a length of time it will start to make a sound, which would alert someone to its presence. 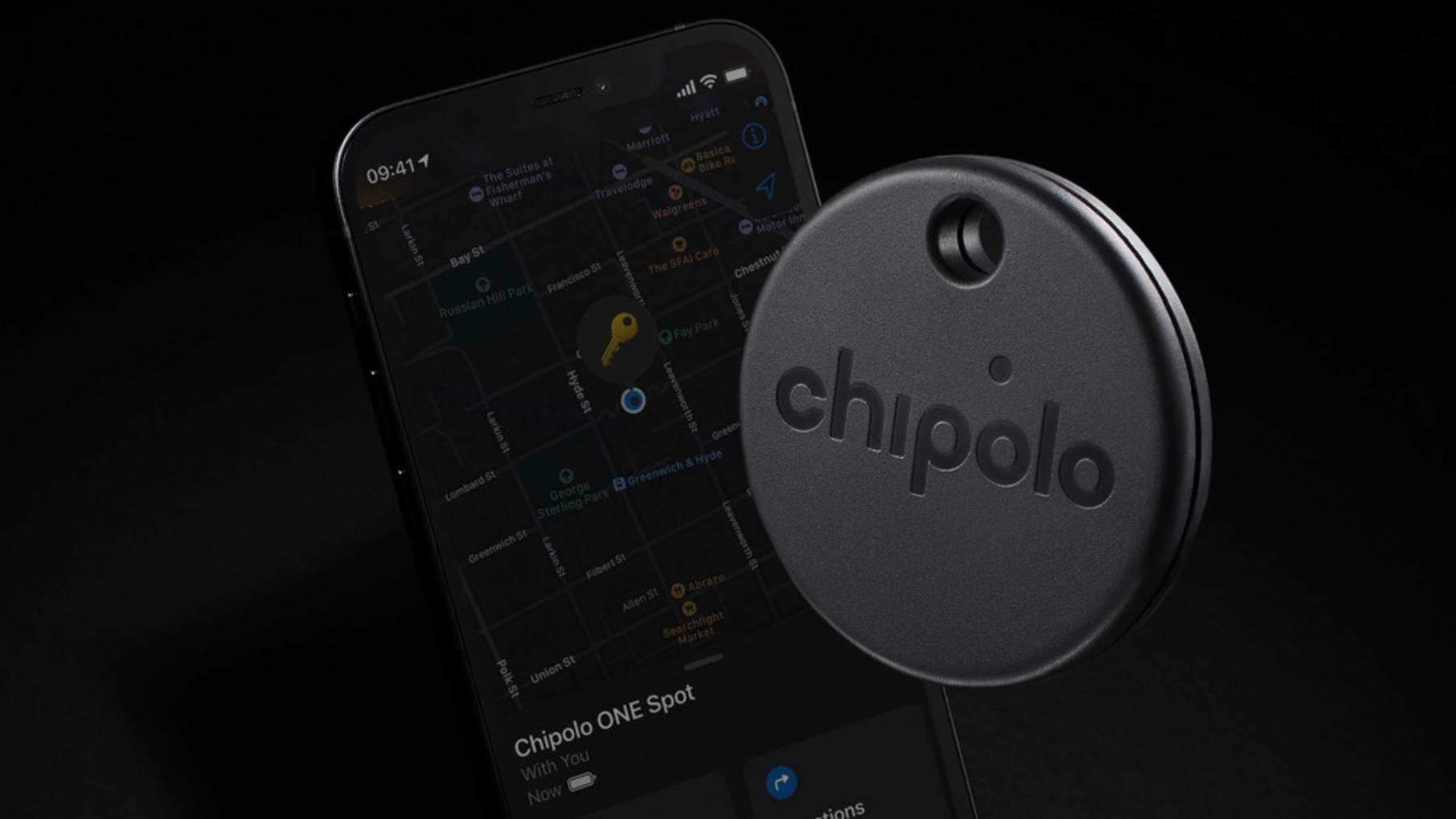 Chipolo has had the ONE range for a while now, and they’ve proven to be a popular and reliable way to keep track of your important items.

Now, the company has added a new version in the form of the ONE Spot, which is important as it’s compatible with Apple’s newly enhanced Find My network. This means you’ll be able to use the Find My app on your iPhone to see where the ONE Spot (and the item it’s attached to) is located.

Like AirTags, the ONE Spot has a replaceable battery, using the standard CR2032 variant. It also comes with an IPX5 water rating, which is shower-proof rather than able to survive any dips. So don’t put it on your dog if he likes going in the sea.

The ONE is available in a wide range of colours, rather than the solitary silver with a white surround of the AirTag, and measures 37.9mm across its circumference, with a depth of 6.4mm.

Using the dedicated app, you’ll get alerts if you’re more than 200ft away from the ONE Spot, plus there’s the added advantage of asking Siri to call the ONE Spot, which then triggers the loud ringer on the device. So, you should be able to track down those elusive keys in your house without too much fuss.

Once out of Bluetooth range, Chipolo falls back on its Community Search feature, where you mark the item as lost then receive alerts if any other Chipolo users goes near the item. Of course now that the Chipolo is on the Find My network that will also include any iPhones or other devices that are able to communicate via the network.

The standard ONE is available now, while the ONE Spot will be available in June 2021. 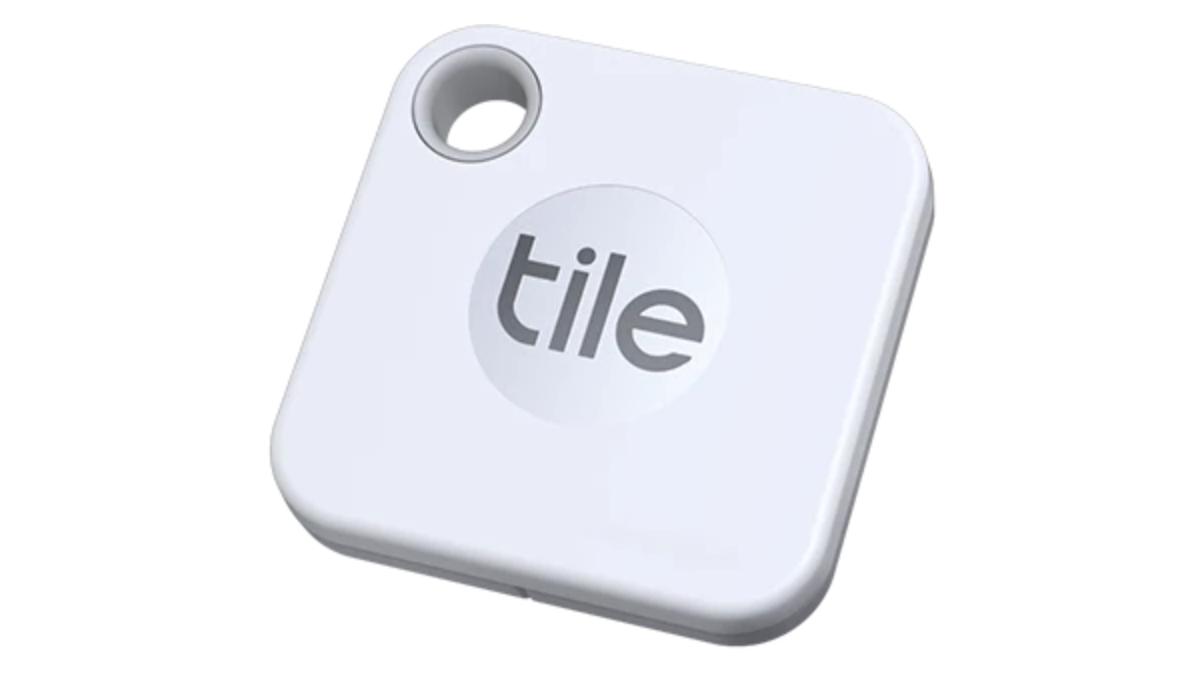 One of the leading names in Bluetooth trackers is Tile. The company was one of the first to champion the idea and its square design makes the trackers instantly recognisable. The Tile Mate is the cheapest offering from its current range but offers plenty of useful features.

Powered by a replaceable CR1632 battery, which should last up to around a year, the Tile Mate can track items up to 200ft away, which is usually ample if you’re just looking for your keys at home or the car in a large parking area.

Outside of that range, you’ll be able to track the Mate via Tile’s other users, with any Tile device triggering an alert you if it passes by your missing item.

Unlike the Chipolo ONE, you don’t get smart alerts that let you know you’ve gone out of range of the Tile, instead this is an optional Premium feature in the app that will cost an additional £2.50/$2.50 per month when paid annually. One upside to the subscription is that get ‘free’ battery replacements, although you can just buy them yourself and save quite a bit of money.

The Tile website lists the Mate has being water resistant but doesn’t state any more details. So, it’s safe to assume that this will be safe if out in the rain, but probably meet an untimely demise if submerged fully in water or other liquids.

Tile Mate isn’t – and probably won’t be – compatible with the Find My network. 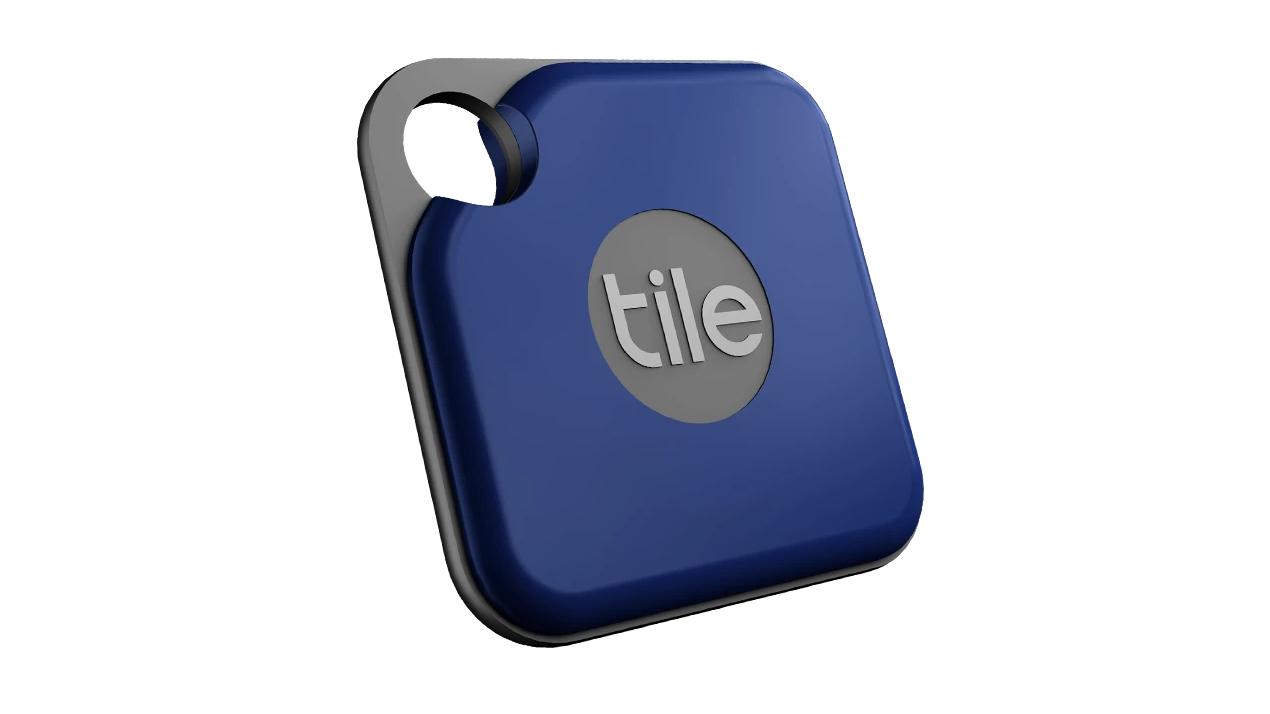 The bigger brother of the Mate is the Pro, which not only has slightly expanded dimensions (42mm x 42mm x 6.5mm as opposed to 35mm x 35mm x 6.2mm), but an increased tracking range.

The Pro can stay connected to your iPhone for up to 400ft, double that of the ONE Spot and Tile Mate. It also has a louder ring, which makes sense, as you’ll need to hear it from further away.

The larger frame allows for a CR2032 battery, as in the ONE Spot and AirTag, which should keep things going for around a year.

Aside from these details though, it’s very much the same as the Mate. This means water resistance rather than proofing, and still the need for a premium subscription if you want Smart alerts.

Like Tile Mate, Tile Pro isn’t – and probably won’t be – compatible with the Find My network. 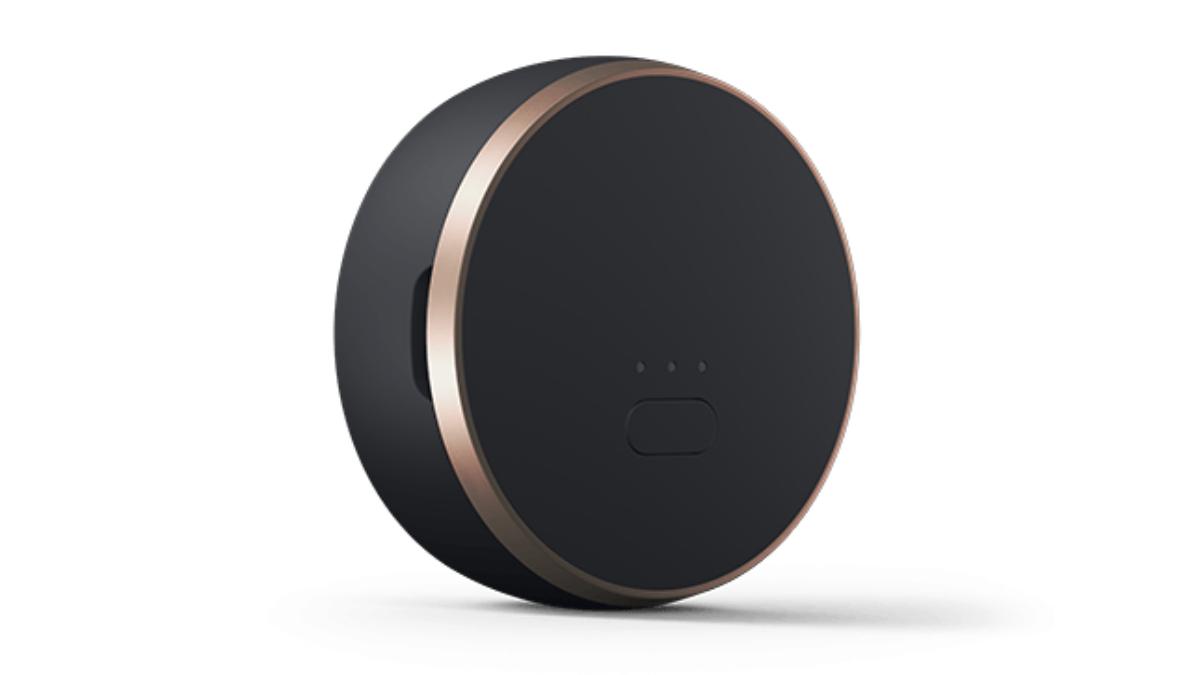 For something a little different, Vodaphone UK offers the Curve. This has a novel approach in that it still acts as a tracker but doesn’t use Bluetooth. Instead, it employs a SIM card in the device that then uses the Vodaphone network to geolocate the Curve.

While this gives it a far greater reach than Bluetooth, it does require signing up to a dedicated SIM plan, which costs £2 per month for a minimum of 24 months or £3 if you only want a 12-month contract.

The Curve boasts an IP67 waterproof rating, just like AirTags, has a rechargeable battery that lasts around 7 days on a single charge, plus there’s a Quick Alert button that can instantly send location details to your phone.

The circular chassis has a 42.1mm circumference and is 16.4mm thick, with a weight of 30g.