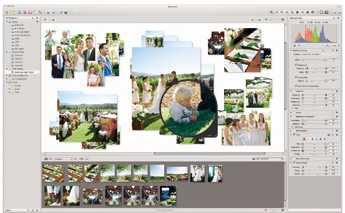 Aperture 1.5 is the result of a year of listening to what users want out of Apple’s all-in-one post-production tool for photographers, according to Apple director of professional photography partnerships Richard Kerris.

“In the year that we’ve had this product out we’ve had many very famous photographers using it. Each of these photographers bring a workflow need and a way they want to use the application to us, so we listened to them and that helped us bring out 1.5,” explained Kerris.

“Aperture 1.5 reflects what our customers said we needed to do to develop this product,” he added.

“First and foremost they talked about our library,” he explained. One of the main criticisms of Aperture was the fact that all images had to be stored in one central library. Kerris explained that as many photographers take 20GB of photos on one shoot, their hard drive often isn’t big enough. “So the first thing we did is we opened it up and allow users to store photos anywhere,” he revealed.

The loop tool was another feature of Aperture 1.0 that received criticism for only zooming in 100 per cent. “We listened to the feedback – some people loved the loop and wanted to do more with it so we came out with a enhanced loop. You can go up to 1,600 per cent, you can look at your colour values. It’s a much more robust tool for photographers.”

Another criticism of Aperture was the fact that the tool only ran on Apple’s higher-end hardware, such as the MacBook Pro or the Mac Pro. Now the software is capable of running on all Apple hardware. “We worked hard on the core of the application so it works on everything from a Mac mini to an iMac, to a MacBook and a MacBook Pro,” said Kerris, “I think that’s a big statement, to come from the high end to being able to work on any of the hardware platforms.”

Aperture 1.5 also offers the ability to generate XMP files automatically through AppleScript. “Everything should be scriptable. The way we look at it is no application should be exactly the same for any one person, it all has to be adjusted, you should make it feel like your tool, the tool shouldn’t be telling you what to do,” explained Kerris. “We’ve got a lot of things in Aperture aimed at customisation, the fact that you can script everything around Aperture is very important,” he added.

The ability to export Raw images with IPTC data stored in XMP sidecar files, for easy use with other applications like Adobe Photoshop, is another major enhancement. The company has received some criticism for not allowing customers to import XMP sidecar files, an inconvenience for anyone moving across from other digital photography applications.

Defending this, Kerris said: “Right now we’ve got the export, and that was one of the big things photographers had asked for. We will listen to the community and respond accordingly if there is a high need for importing XMP sidecar files. At this point right now we haven’t heard that, but we are always listening.”

Another criticism that Kerris answered is the suggestion that Apple is slower than Adobe when it comes to providing Raw updates for new digital SLRs. “I think that’s a misnomer because we have made five or six updates in the last year.” Apple frequently adds Raw software updates to its Mac OS X updates and these come out regularly.

“There are a lot of advantages we get by using core technologies on the platform – not least speed, performance and consistency,” explained Kerris, “We don’t want to give those things up to lock it into some specific application.”

Aperture 1.5 also adds new sharpening tools, including edge sharpen, and colour tuning for image manipulation. Kerris doesn’t believe Apple is going back on its claim that Aperture is not intended as a replacement for Adobe Photoshop. “Managing your library is far different from wanting to make a photo look like a painting or adding layers to it.”

Regarding Apple’s advantage over Adobe’s own post-production tool for photographers, Photoshop Lightroom, currently in beta, Kerris said: “Shipping is a big advantage and having customers that have a commitment to the product.” The fate of Apple’s solution could still be determined by Adobe’s product when it does ship, that product having the advantage of being cross platform, and potentially tied in with Photoshop itself.

This is the first in a series of articles regarding Aperture that will appear at Macworld.co.uk this week. In the next Richard Kerris discusses plug-ins and some exciting new developments to come in Aperture 1.5.