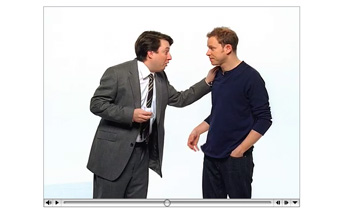 Apple’s made-for-the-UK series of ‘Get A Mac’ ads may have backfired, a report explains.

Citing a MediaWeek report examining YouGov’s BrandIndex, PC Retail reports that UK consumer buzz around Apple has fallen from +8 to +4 since the ads were screened.

Apple’s series of ads are intended to show a humorous comparison between the Mac and PC platforms using a pair of UK comedians, David Mitchell and Robert Webb.

The comedians are known for their appearances in The Peep Show, which casts Mitchell as an affable and good-natured foil to the slightly more superior wit of Webb.

However, Apple’s decision to cast Webb as the Mac character has invited criticism, with many pointing out that the UK ads seem to portray Mac users as a little too smug.