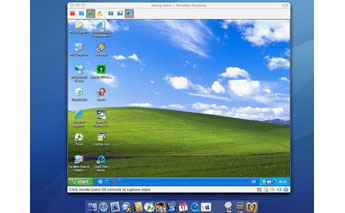 Both Parallels Desktop and VMware Fusion deliver on the core goal of allowing Mac users to run Windows applications without needing to reboot their computers.

The biggest difference between them right now is that Parallels Inc’s product is finished while VMware’s Fusion is still in beta testing. In fact, Parallels recently announced the availability of the third beta version of the next release of its software, which includes support for upgrading a virtual Windows XP system to Vista, among other features.

The fact that Fusion is still in beta is rather evident. Several configuration dialogues include the sentence: “This device will be editable in a future release,” and there are some minor stability problems.

Performance is another major difference, and it is linked to the fact that Fusion is still in beta. Although the time it takes to install or boot Windows or to run most applications is similar between both Parallels and Fusion, some actions that involve redrawing the screen are slower in Fusion, sometimes resulting in a sluggish feel by comparison.

Running benchmark tests within similarly configured virtual machines under each application reveals dramatic differences in some processor and graphics functions. (Parallels’ scores for graphics performance are almost double those of Fusion.) The most likely cause for these differences is explained in a Fusion alert that informs users that it is running in a debug mode that reduces performance and that can’t be disabled in the current release.

The finished version of Fusion will tell a fuller tale on the performance front.

Both Parallels Desktop and VMware Fusion are easy to install. Both offer set-up assistants that guide users through creating a virtual machine and offer configuration suggestions based on the operating system being installed and the hardware specifications of the Mac.

Fusion takes advantage of the dual-core processors used in almost all Intel Macs by allowing you designate whether the virtual machine will be able to use one or both cores. This is a nice feature because you can opt to retain the processing power of one core exclusively for Mac OS X and Mac applications, or you can throw all the processing power to the virtual machine.

Parallels makes set-up much easier than Fusion with its ‘Express Windows OS Installation Mode’ that performs the entire install process of either Windows XP or Vista for you. All you need to do is enter your name and Windows activation key. This is both extremely user-friendly and a great-time saving convenience.

Both products offer a set of tools and specialised drivers for Windows to enhance its performance in a virtual environment. These tools offer things such as a shared folder that can be accessed from Windows and Mac OS X, the ability to respond to the cursor appropriately as you move into or out of the window containing the virtual machine, and enhanced hardware support. Both products also offer a tool for compressing the hard drive image file that serves as the virtual machine’s hard drive.

The boot process for virtual machines created with either Parallels or Fusion is essentially the same as the boot process for an actual PC. One difference is that Fusion provides you with a virtual BIOS configuration tool that can be used to change boot options such as the order in which the virtual machine searches for a bootable drive. For its part, Parallels manages these features through a virtual machine configuration dialogue. Fusion also supports network boot from a Windows PXE server, which Parallels does not.

Most users will find both Fusion and Parallels easy to use and will probably never even need to adjust the configuration settings from their defaults. With their respective tool sets installed under Windows, users can easily move between the Windows and Mac OS X environments. The shared folders technique used in both applications is solid, though it took me a couple of reinstalls of the VMware Tools to get this to function properly in Fusion.

VMware delivers another option to accessing files between operating systems with its support for drag-and-drop of files and folders between virtual machines and Mac OS X. This is actually a much easier method than setting up shared folders, and it can be used without having to configure anything. But, as with the shared folders feature, I found that it did not always function properly. This is one of the few places where Fusion truly delivers something that every user will appreciate that Parallels does not, though this feature is slated for the next version of Parallels’ software, Desktop 2.

Parallels also offers a couple of features that make it more user-friendly than Fusion. One of those is clipboard support, allowing you to copy and paste between Mac and Windows applications. This makes working between the two operating systems much more seamless.

Overall, both Parallels and Fusion rate well in the ease-of-use category — or will once some of the reliability issues are worked out during Fusion’s development.

Parallels offers a much broader set of options for advanced configuration. Fusion currently allows for configuration of shared folders, the use of a single hard drive image file, sound, CD-ROM access (read only) and some basic network options.

In contrast, Parallels provides the ability to specify more granular virtual hardware information as well as the use of a disk image to mimic the functionality of a floppy drive. Parallels also offers the ability to clone or re-create with a different maximum size the hard drive image of a virtual machine. (Both applications use dynamically expanding hard drive images, but both also require a maximum size be set for the image when it is created.)

Parallels also supports the connection of multiple hard drive images and the use of multiple disk images or physical drives for use as CD/DVD-ROMs, as well as the creation of virtual serial and parallel ports. All of these features make it a more customisable than Fusion to a user or an application’s needs.

Both Parallels and Fusion offer limited choices for how virtual machines handle networking. Both products allow you to choose between using Network Address Translation to share your Mac’s network connection or choosing bridged access to a specific network adaptor. Parallels also offers a host-only option that allows the virtual machine to connect to your Mac and any other virtual machines as though they were connected via a network. But it does not allow actual network access.

Neither product supports connection to multiple network cards or networks at this time, though Parallels Desktop 2 promises support for up to five network cards.

Both Parallels and Fusion support access to USB devices connected to a computer, though Parallels currently only supports USB 1.1. Parallels gives you the option of having devices be automatically detected and used by the virtual machine or to manually choose the devices that will be used. It appears that this is the how Fusion will ultimately function, but that the capability has not yet been implemented.

Fusion offers access to built-in iSight cameras, Apple’s Bluetooth adaptor (built-in or USB) and built-in IR ports, which are treated as USB 2.0 devices and are not supported by Parallels.

Both Parallels Desktop and VMware Fusion are good products. However, it is clear that Fusion still needs some work in terms of its performance and to fully implement its feature set. It also isn’t quite as stable and reliable as Parallels.

All of that is to be expected from a product currently in beta, but it does mean that Parallels remains the better option for the time being despite the fact that Fusion offers some features that the commercial release of Parallels doesn’t, such as drag-and-drop, control over how many processor cores virtual machines can access and full USB 2.0 support.

It is also worth noting that the next release of Parallels is slated to offer at least two of those features — drag-and-drop and USB 2.0. It is also slated for several more advances including the ability to use a Boot Camp partition as a Windows boot disk instead of a hard drive image file, greatly enhanced network options and full support for CD/DVD drives (including burn capabilities and access to copy-protected discs). There will also be a new mode called “coherence” that will allow Windows applications to run alongside Mac applications without the need for a separate Windows interface (Windows applications display right on the Mac desktop and appear in the Dock).

As a result, it seems that for the foreseeable future, VMware will remain a generation behind Parallels.

Products that use virtualisation are, of course, not the only option for running Windows on an Intel Mac. The other option is Apple’s dual-boot system called Boot Camp. The primary advantage to virtualisation is that a user doesn’t have to leave the Mac OS X environment or restart the computer to run Windows because it is in a virtual environment within Mac OS X. Virtualisation also offers support for a much wider range of Windows versions as well as other operating systems.

One major point in favour of Boot Camp is that the end-user licence agreements for Windows Vista restrict its use in virtualised environments. This means that users wishing to run Vista with either Parallels or Fusion will need to purchase the more expensive Business or Ultimate editions of Vista. Even when using those, Microsoft forbids use of the digital rights management technologies that are built into Windows and recommends against the use of third-party DRM products as well.

This means that users should consider carefully whether or not to purchase Vista for use with virtualisation products. The better option might be Boot Camp if Vista is being used for access to protected content from services not available for Mac OS X.

Under the hood, there are some serious differences between dual-booting and virtualised solutions. When a Mac boots into Windows using Boot Camp, it essentially is a Windows PC. When virtualisation is used, Windows does not have direct access to most of the Mac’s hardware. Virtualisation uses a feature of Intel processors to essentially partition the processor into virtual processors and then gives the primary operating system and each guest operating system access to these processors. It also relies on a mix of genuine and virtual hardware to complete the creation of a virtual machine onto which Windows and applications are installed and run.

Ryan Faas is a freelance writer and technology consultant specialising in Mac and multiplatform network issues. In addition to writing for Computerworld, he is a frequent contributor to InformIT.com. Ryan is also the co-author of Essential Mac OS X Panther Server Administration (O’Reilly Media, 2005). You can find more information about Ryan, his consulting services and recently published work at www.ryanfaas.com, and you can email him at ryan@ryanfaas.com.