High street adult retailer Ann Summers has landed itself in a heap of trouble with Apple. 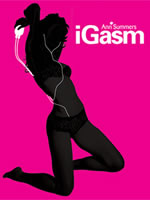 A News of the World report claims Apple is furious about Ann Summers’ promotion of the device, and is demanding all posters for the gadget be taken down, under threat of court action.

The neon-pink posters depict an underwear-clad female silhouette holding an oval white device with two cables – one connected to a pair of white headphones, the other heading down toward the female’s knickers.

The sales pitch urges music fans to: “Go at it hard and fast with a pounding drum ‘n’ bass track or chill with an ambient classic.”

Apple is claiming the ad to be an abuse of the silhouette-based images it uses in its own advertising.