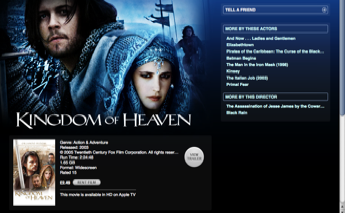 Apple has stealthily made the Apple TV a whole lot more popular in the UK, with a softly-softly launch of film downloads and rentals through iTunes UK.

The iTunes Store in the UK features over 700 films available for rent or purchase, with titles available for purchase on the same day as their DVD release. . iTunes movies are available at £6.99 for library title purchases and £10.99 for new releases. iTunes Movie Rentals are £2.49 for library title rentals and £3.49 for new releases, and high definition versions are priced at just one pound more

“We’re kicking off movies on the iTunes Store in the UK with over 700 films for purchase and rent”, said Eddy Cue, Apple’s vice president of iTunes. “We think customers in the UK are going to love being able to enjoy their favorite movies on their iPod, iPhone or on a widescreen TV with Apple TV”.

Some highlights include Matrix, One Flew Over The Cuckoo’s Nest, An Inconvenient Truth and I Am Legend.

The Times last week claimed Apple to have reached a film distribution deal with Disney, Paramount, Twentieth Century Fox and Warner Brothers, though studios insisted download prices do not undercut the cost of physical DVDs.

iTunes film rental uses DRM to protect purchases but allows users to watch them using a Mac or PC, and to transfer them to an iPod or iPhone. For rental, customers have 30 days from the time of their “rental” transaction to start watching the movie, and after they start, have 24 hours to finish watching it.

Film purchases and rentals from the iTunes Store for Mac or Windows require iTunes 7.6.2. They can be previewed and watched on iPod classic, iPod nano with video, iPod touch, iPhone and on a widescreen TV with Apple TV.