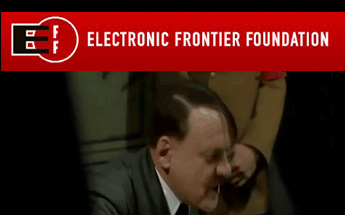 The Electronic Frontier Foundation (EFF) has become the latest victim of Apple’s iTunes App Store “objectionable” content policy, after a submitted app was rejected over a link to a YouTube parody video.

Founded in 1990, the EFF is a donor-funded nonprofit organisation aimed at defending digital rights covering free speech, privacy, innovation, and consumer rights. The EFF often find themselves defending individuals against big business and US government in the courts.

The EFF themed, but unofficial RSS feed, is the work of software developer Duane Fields of Exact Magic. It caught the eye of Apple’s App Store approval team who rejected the application. Apple apparently objected to a blog post that linked to a ” Downfall” parody video created by EFF Board Chairman Brad Templeton.

The parody casts Hitler in the role of entertainment industry executive, ranting about the failure of digital rights management (DRM) and the continued popularity of fair use. Among the subtitles is the f-word. 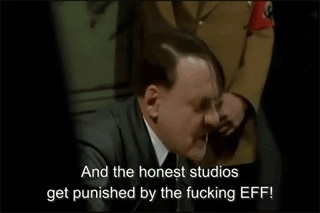 The objectionable f-word spotted by Apple.

As the EFF’s Corynne McSherry points out in a Deeplinks Blog post anyone with an iPhone or iPod touch can already watch the YouTube video – via a bundled YouTube app or Safari browser – so the ban appears ineffective.

McSherry responds in the EFF post saying: “This is just the latest example of the failings of Apple’s iTunes App Store approval process, which has been revealed to be not just anti-competitive, discriminatory, censorial, and arbitrary, but downright absurd.”

“Let’s be clear: we are not saying that Apple has to carry apps it doesn’t like in its App Store. But iPhone owners who don’t want Apple playing the role of language police for their software should have the freedom to go elsewhere. This is precisely why EFF has asked the Copyright Office to grant an exemption to the DMCA for jailbreaking iPhones. It’s none of Apple’s business if I want an app on my phone that lets me read EFF’s RSS feed, use Sling Player over 3G, or read the Kama Sutra.”