Editor’s note: Apple has released more information regarding the iPad UK release date and price. Pre-orders will be available from 10 May, and the device will go on sale 28 May. The suggested retail price is £429  for 16GB, £499  for 32GB, £599 for 64GB for Wi-Fi models.

All prices include VAT. The iPad will be sold through the Apple Store, Apple’s retail stores and select Apple Authorised Resellers. The iBooks app for iPad including Apple’s iBookstore will be available as a free download from the App Store on 28 May. O2, Vodafone and Orange will all offer 3G data plans.

With just 60 days to go until the Apple iPad launch, and following a US-only launch event, there is much speculation as to where the UK sits with the Apple iPad. Both with regards to the release date, and the price.

First, let’s take a look at the release date. Apple announced “within 60 days” for the WiFi model, and “within 90 days” for the 3G model. We assume that the 3G model will take slightly longer because it has to undergo FCC certification in the United States.

Apple should have released the Apple iPad to the world (including the UK) by Sunday 28 March. Obviously Sunday is something of an odd launch date, and the last few iPhones have been released on a Friday so we think the 26 March is a likely bet if Apple takes it right to the wire. But, of course, it could come sooner than this if Apple decides to launch early.

The 90 date wait for the 3G model will take you all the way up till Tuesday 27 April 2010. Apple frequently releases products on a Tuesday, so this date seems appropriate. We think Apple will have planned the announcement with the FCC certification period so, to our minds, this date would probably be a bit more permanent (the WiFi unit may have some leeway depending on production).

Update: Apple has announced a delay to the Wi-Fi version of the iPad in the UK, that will now ship in “late April.” The Wi-Fi and 3G versions of the iPad are now expected to launch in the UK in the week running from Monday 26 April to Friday 30 April.

Update 2: Apple has announced a further delay to the iPad international launch (including the UK.) Both versions of the iPad (3G and WiFi) will launch in the UK at the end of May. According to Apple this is due to unprecedented demand in the United States. We now expect the iPad to go on sale on Saturday 29 May. Apple will begin taking pre-orders for the device on 10 May. Click here for more information.

So that brings us on to the issue of pricing in the UK. As many Macworld UK readers know, Apple products are uncomfortably high in the UK, and the prices have risen as our exchange rate has fallen against the dollar.

We’ve seen a lot of fuzzy maths today in the newspapers, who have taken the US price and – in the best case – added 17.5% VAT, or in the worst cases translated it verbatim somehow assuming that VAT no longer applies in the UK and have put this down to Apple just being expensive (we’re looking at you, The Metro).

A good rule of thumb is to take the US price, convert it to the UK price using the daily exchange rate, add on the 17.5 per cent VAT, then add on another 7 per cent or so (Steve Jobs said during the iPhone launch that this was simply because “it’s just a bit more expensive to do business here… store stuff, ship stuff around”.)

However, we’ve found a better rule of thumb is to take a product on the US store that matches the US price you’re looking at, then find the same product on the UK store and see how much it is. The more recent the product the more accurate the price. Apple sets prices locally, but they tend to match up prices across the entire product range. We used this system to accurately predict the original iPhone launch price (£269) and we’ve used it now to gauge the Apple iPad pricing in the UK. 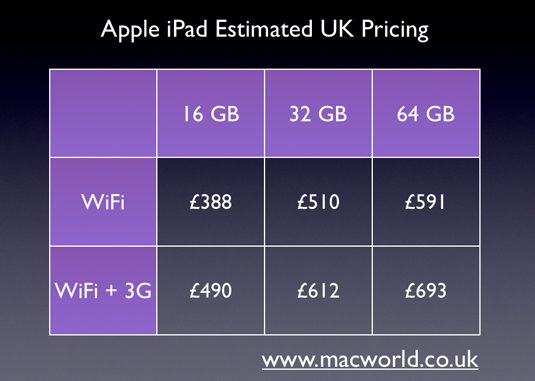 We’re not saying this system is perfect, and Apple might give-or-take a few pounds in either direction. But this is an ‘educated’ guess rather than a stab in the dark. This is pretty-much where we expect the Apple iPad to sit. We will update our readers when Apple UK announces the exact price.

Editor’s Note: Since this article was written the value of sterling against the dollar has fallen again and currently stands at £1.50 to $1.

Macworld UK originally  estimated a launch price of £388 for the iPad. Following another drop in the value of sterling we have now adjusted this figure.

Macworld UK now estimates the following UK pricing for the iPad at launch:

Those figures are based on the current US exchange rate against the current rate of sterling which is now $1.50 for every £1, plus 17.5 per cent VAT (Value Added Tax – the UK term for sales tax – this is included with the price in the UK, but excluded from the price in the US) plus an extra 7 per cent. This is the amount we judge Apple charges extra in the UK over the US. This is the: “it just costs a little bit more to do business here, move stuff around, service product and so on” rate that Apple’s CEO Steve Jobs spoke to us about during the original iPhone launch in the UK. You can watch the video of Steve Jobs talking about price differences  here.

Update: Apple has announced that international pricing will be available for the iPad on 10 May along with the pre-order scheme.