A Taipei,Taiwan-based manufacturer of Apple iPhones and Hewlett-Packard computers is seeking out mental-health professionals following an unprecedented series of suicides and suicide atempts.

At least seven employees have committed suicide so far in 2010 at the Hon Hai Group, better known as Foxconn Technology, manufacturing facilities. Many more have believed to have tried to commit suicide. According to Bloomberg, the company has deployed 100 counsellors, which includes an ’emotional support hotline’ and prayers from Buddhist monks, that may have prevented more than 30 suicide attempts.

Additionally, Foxconn’s health division plans to work more closely with local governments and academic institutions to support its 800,000 workers in China, while the company also plans to build leisure facilities in its factories. Foxconn hit the headlines last July when Sun Tanyong, 25, killed himself after a fourth-generation iPhone prototype went missing. “We are saddened by the tragic loss of this young employee, and we are awaiting results of the investigations into his death,” Apple said at the time. “We require that our suppliers treat all workers with dignity and respect.”

Following earlier tabloid exposure of working conditions under the headline ‘ The stark reality of iPod’s Chinese factories‘, Apple conducted its own review of the facility but found few violations of its supplier code of conduct. In February this year, Apple issued its 2010 Progress Report on Supplier Responsibility ( PDF) highlighting working conditions in factories that build Apple products including those in Taiwan, China, the Philippines, Singapore and Thailand. The 24-page progress report, released just two days ahead of Apple’s annual shareholder meeting, included the results of supplier audits that Apple carried out in 2009, as well as information about programs Apple has enacted to help improve conditions for workers across its supply base. 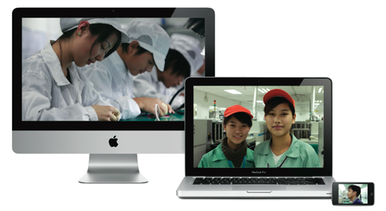