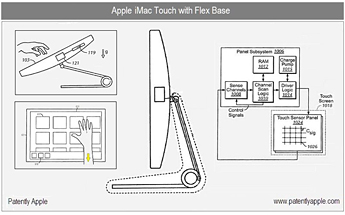 An Apple patent focused blog claims the company has plans for a touch screen iMac desktop computer, along with a tablet style MacBook. The Apple patent 006210 A1 “Transitioning between Modes of Input” was filed earlier this year.

Patently Apple highlights the ‘iMac Touch,’ promising: “We finally get to post the Mother Lode of all information concerning the iMac Touch and it’s absolutely brilliant.”

The website claims the Apple patent, a European filing, shows an iMac style desktop running both Mac OS X and iOS, used by Apple’s mobile devices including the iPhone, iPod touch and iPad. “Imagine having an iMac on your desktop one minute and a gigantic iPad the next. Imagine playing iGames on this dream machine – Wow! Imagine reading a double-page book on this – Unbelievable!” 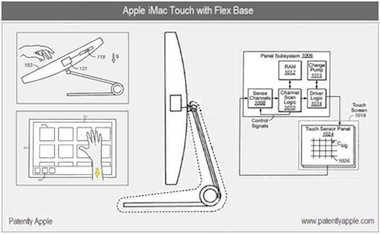 According to the patent, the ‘iMac Touch’ stand is shown to be capable of being positioned at a low angle allowing users to work directly on the screen. The Wacom Cintiq 21UX interactive pen display currently allows users to work in a similar way although the display uses a pressure- and tilt-sensitive pen to interact.

Patently Apple suggests the ‘iMac Touch’ could sense a change in orientation in the touch screen display and react accordingly. “An accelerometer in the display could sense the force of gravity along an axis, and the measured force could be used to determine an angle of the display with respect to the ground (i.e. the plane perpendicular to the direction of the force of gravity). A transition between input modes could be performed when the vertical angle (tilt) of the display crosses a predetermined angle.”

Additionally, the website suggests a rotation sensor could be mounted in an adjustable stand of the display or the display could include a touch sensor area located where a user typically grasps the display to change the display’s orientation. Dependent on a predetermined threshold, the display would automatically switch from touch input mode to a keyboard mouse input mode. 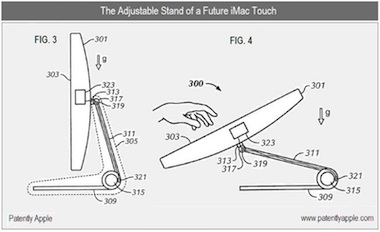 The position would determine which Mac OS was used, upright Mac OS X with keyboard and mouse, iOS when the screen was laid close to flat for touchscreen use. The transition between the two would be an automated process suggests Patently Apple, with the ability to set the threshold, 60 or 90 degrees for example, when the switch between the two operating systems is made. 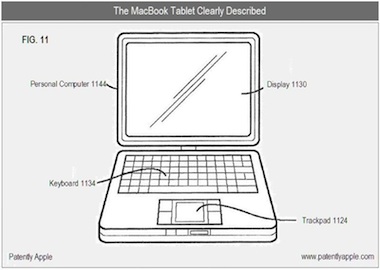 The website also describes a  potential ‘MacBook Tablet’, that could transform from a MacBook to a iPad type touch screen device using the same Mac OS X and iOS combination planned for the ‘iMac Touch.’

The patent ties in nicely suggests Patently Apple with a report from far east news source DigiTimes which suggested Apple has plans for a 22-inch touch-enabled all-in-once PC sometime in 2010.