Apple will continue to dominate the tablet market sector for the forseeable future, according to predictions from analyst firm iSuppli.

The company said that the iPad’s head start in market share and “ecosystem development” will enable Apple to maintain its market dominance in 2011 and throughout most of 2012, despite the influx of competitors.

Tablet shipments will increase by a factor of 12 by 2015, iSuppli said, and total shipments of tablets will amount to 242.3 million units in 2015. In 2010, a total of 19.7 million tablet devices shipped, the vast majority of them – 17.4 million – ‘media tablets’, running lite operating systems such as iOS and Android.

“The remarkable expansion of the tablet market from 2010 to 2015 will be driven by three successive waves of growth,” said Rhoda Alexander, director of monitor research at IHS. 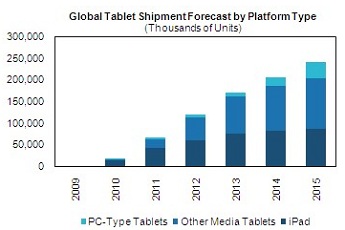 “The first wave, which is hitting in 2010 and 2011, was created by the arrival of the iPad and the ensuing tsunami of demand for the device. The second wave, arriving in 2011 and 2012, will be propelled by a deluge of iPad competitors, particularly Android-based models. The third wave, which will turn up in 2013, will consist of a flood of models based on the Windows operating system that will expand the reach of tablets into traditional computer markets,” Alexander continued.

iSuppli said that shipments of PC-type tablets — tablets that have desktop operating systems installed rather than ‘lite’ OSes such as iOS and Android – would climb to 39.3 million units in 2015, up from 2.3 million in 2010.

Last month, Ovum predicted that the iPad would drive growth in the tablet sector, with shipments hitting the 150 million per year mark by 2015.

Another analyst firm, IDC, said that the iPad accounted for nearly 90 percent of the ‘media tablet’ market in Q3 2010.