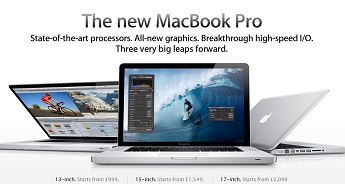 Apple has lifted the lid on its new range of MacBook Pro laptops.

It was initially expected that the new MacBook Pros would be unveiled after Intel’s Light Peak event due to take place at 1800GMT today though the new models were announced just before 1400GMT.

“Thunderbolt is a revolutionary new I/O technology that delivers an amazing 10 gigabits per second and can support every important I/O standard which is ideal for the new MacBook Pro,” he continued.

The 15-inch and 17-inch MacBook Pro models feature quad-core Core i7 processors up to 2.3 GHz and AMD Radeon HD graphics processors with up to 1GB of video memory for high performance gaming, pro video editing and graphics intensive applications.

Today is also Steve Jobs’ 56th birthday and the new MacBook Pro range is said to be a present for the Apple CEO.

Apple shareholders voted last night not to reveal succession plans for the company after Jobs steps down from his role as CEO.