Londoners in the Covent Garden area might have spotted some odd goings-on at the Apple Store on The Piazza this morning.

A TV van is currently parked outside the store – not so unusual, you might think, on the day that Apple is set to announce the next-generation iPhone – but there’s more.

Windows (the glass objects rather than Microsoft’s operating system) are well-known for one particular quality – their transparency. However, the windows of the Covent Garden Apple Store are not in the slightest bit see-through this morning. The store would also seem to be closed to customers, though according to Apple’s website there are workshops due to take place there today.

Apple will also be holding a small, private event at the Covent Garden store this afternoon where the iPhone announcement will be streamed.

Of course, the blocked-out Windows could have something to do with the film crew that are seemingly on site – however, perhaps it is intended to keep prying eyes away from what is inside. 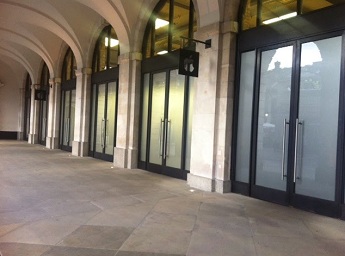 It’s possible that Apple could surprise us by announcing immediate availability for the next-generation iPhone – which will make Rob Shoesmith’s experiment a very short one – but more likely that there is an iPhone-related display being readied for this afternoon’s announcement.