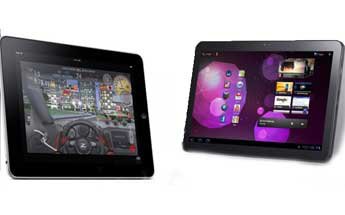 The global patent battle between Apple and Samsung has witnessed another skirmish, this time in Australia. Apple has come out as the victor in this round at least.

According to a report by The Wall Street Journal, Australian Justice Annabelle Bennett ruled at the Federal Court in New South Wales that the Samsung Galaxy Tab 10.1 couldn’t be sold in Australia if it used features such as touch-screen technology that Apple claims infringe patents used in the iPad.

The WSJ quotes Paul Budde, an independent telecoms analyst, who called the Australian decision a short-term victory but long-term loss for Apple. “In the end it’s a battle between Apple and Google,”said Budde. “I can clearly see that Apple has a case that it has created some innovative new technology, but on the other hand the reality is we live in an open world and you cannot because of one innovation stop the rest of the world going in similar directions.”

Apple has already persuaded a court in Germany to ban sales of Samsung’s Galaxy Tab. The two companies have also launched patent claims against one another in the U.S., Japan and South Korea.

Samsung is expected to appeal the Sydney court ruling and has vowed to pursue a counterclaim, alleging that Apple infringes on some of its wireless-technology patents.

“We are disappointed with this ruling and Samsung will be seeking legal advice on its options,” the company said in a statement. “We will continue to legally assert our intellectual property rights against those who violate Samsung’s patents and free ride on our technology.”

Apple responded to Thursday’s court decision at the state by repeating a statement from its original filing: “This kind of blatant copying is wrong, and we need to protect Apple’s intellectual property when companies steal our ideas.”