Apple has quietly upgraded the processor, hard disk and graphics capabilities of the MacBook Pro range. 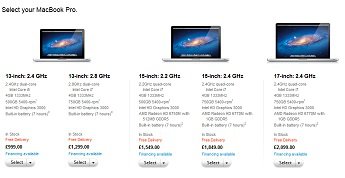 All models are in stock now and come with free delivery.

The spec boost to the MacBook Pro line was expected, though it was thought that the changes wouldn’t happen until November.