The rumours of an Apple TV set to emerge in late 2012 are widespread. But according to YouGov, the most quoted research agency in the UK, only 15 per cent of the UK population are planning to buy an internet enabled Smart TV in the next year. Although Apple branded products are likely to be popular with Apple fans, it looks as though a television would struggle in this tough market with such low demands for the technology.

It has been said that the late Apple co-founder Steve Jobs considered an Apple TV his final frontier and told Walter Isaacson, the writer of his biography, “I finally cracked it.” Apple enthusiasts are eagerly anticipating confirmation of the development and its software, expecting it to be, as Apple always is, innovative and pioneering.

However, data released today suggests that few others than the dedicated Apple users will own an iTV, the suspected name for the Apple television, next year, as Smart TVs are not experiencing the success that many hoped for. Data from YouGov has shown that only 1 in 10 people currently own a Smart TV.

Apple will allegedly be releasing the television up to six months ahead of competitors LG and Samsung. According to a report from Apple Insider, Jeffries analyst Peter Misek said of Apple’s competitors: “They hope to avoid the fate of other industries and manufacturers who were caught flat footed by Apple. Having said that, it appears that mainstream TV manufacturers are likely to be at least six to 12 months behind in a best-case scenario.” 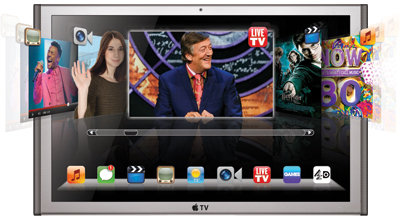 But don’t expect any news from Apple any time soon. Although no ideas on functions developed by Jobs have been revealed, speculations have arose that the Apple TV will use the Siri personal assistant app that is available on the iPhone 4S. This means that iTV could be one of the simplest televisions to operate, eradicating the everlasting frustration over losing the remote.

Although Apple is on top with the iPhone, how can it get the same worldwide success with a television? Suggestions have been made that the deal breaker for consumers will be a ‘Social TV’ app. This app will allow users in different locations to watch shows together at the same time, whilst simultaneously being able to share and comment on what they are watching via Facebook or Twitter. According to YouGov, 60 per cent of the UK population use Facebook everyday, so the prospect of iTV combined with the access to social media may immediately captivate some customers simply by offering another gateway to social networking.