Sites across the Web have been given another chance to run images of the eerie Steve Jobs poseable doll from In Icons as the expected legal challenge from Apple seems to have been delivered to the Chinese company.

The Telegraph broke the story of Apple reportedly hitting In Icons with a legal challenge with “Apple allegedly threatening to sue the toy maker unless they cease trading.”

No sources are offered by the report, which also cites a letter from Apple to the Chinese manufacturer. Reporter Amy Willis says the letter ‘reportedly stipulates’ that any toy that resembles the technology company’s logo, person’s name, appearance or likeness of its products is a criminal offence.

The Telegraph also reports that the doll, which was expected to ship in February for $99, has already appeared on eBay for around $135. 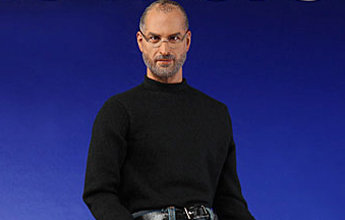 Apple does have form in this area. Macworld has covered previous legal action taken by Cupertino, including on one occasion when M.I.C Gadget tried to circumvent a previous ban by dressing a Steve Jobs doll in a ninja outfit and renaming it the Pineapple CEO.