Vimeo has launched versions of its mobile app for Android and Windows Phone, the company announced at CES in Las Vegas.

Vimeo already offers an iPhone app, which launched in the first quarter of 2011, but is awaiting approval from Apple on an updated version which is expected to launch in the coming weeks.

Among the features of the the Vimeo app, which is free to download, include the ability to upload raw footage or video you have already edited in high or standard definition. It’ll also let you share videos through Facebook, Twitter, Tumblr and WordPress as well as via email and MMS.

You can also download your Vimeo videos to your mobile device’s camera roll, watch videos from your Inbox, and add videos to your Watch Later queue. Stats on daily plays, likes and comments on your videos are also available through the mobile app. 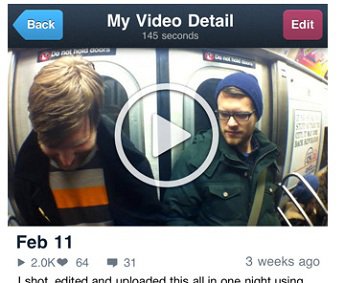 The updated version of the iOS app will include iPad support, a native full-screen video editor and access to the Vimeo Music Store built in, Vimeo’s lead mobile developer Joe Schmitt told Macworld.

“With the widespread accessibility of high-quality video on mobile devices and high-speed mobile internet access, people use their mobile devices not only to watch video but to shoot and then upload video to share online,” said Schmitt.

“With mobile devices making up approximately 15 percent of our site traffic, we recognise the importance of expanding our platforms to allow people to access Vimeo from as many devices as possible.”

Interestingly, a version of the app is also available for Amazon’s Kindle Fire – a device that has no camera.

We’ll let you know just as soon as the updated Vimeo app is available in the App Store.