Apple is expected to introduce interactive e-books for iOS devices at its education-themed announcement in New York on Thursday.

The Wall Street Journal describes “textbooks optimized for the iPad and that feature ways to interact with the content, as well as partnerships with publishers” as the subject of Apple’s announcement, while Ars Technica promises what will be the “Garageband for e-books”.

What it means by that is that Apple could announce tools to help create interactive e-books, not just digital textbooks for students to use. Apple will announce support for the ePub 3 standard going forward, the report says, which could lead to iBooks for the Mac platform, rather than it being limited to iOS as it is now.

Meanwhile, our colleagues over at Macworld US have made a few of their own predictions about the event. Lex Friedman and Dan Moren believe that as well as an e-book related announcement, there could be some iWork upgrades on the agenda too. 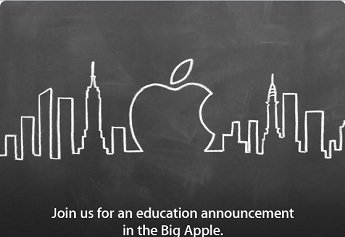 “I think Apple might feel that it’s let Microsoft rule the education market with Office for far too long now. And as Cupertino has increasingly made inroads into education via its compelling hardware, it seems only fitting that it reassert its software products in that market as well, harkening back to the glory days of the Apple II. So, perhaps we’ll see some education-specific upgrades to iWork that will merit attention during the event,” Dan said.

We’ll have to wait until Thursday to find out. The announcement is due to take place at 3pm GMT.