Apple senior vice president Scott Forstall is likely to be the company’s next CEO, according to a new book.

Adam Lashinsky’s Inside Apple: The Secrets Behind the Past and Future Success of Steve Jobs’s Iconic Brand is due to be released on 25 January and will cost £12.40 through Amazon.co.uk. In it, Forstall is described as “a sharp, down-to-earth, and talented engineer, and a more-than-decent presenter”, as noted by Fortune.

Lashinsky, a senior editor at Fortune, says that Forstall stands out among Apple’s senior management team as the most likely to succeed Tim Cook, who was only appointed CEO of Apple in October last year following the death of Steve Jobs.

Forstall is 43 and currently heads up Apple’s mobile software division. However, Lashinsky cautions that Forstall may have been overly ambitious. “He blatantly accumulated influence in recent years, including, it is whispered, when Jobs was on medical leave,” Lashinsky writes.

Inside Apple: The Secrets Behind the Past and Future Success of Steve Jobs’s Iconic Brand is likely to be a hot seller as the most important Apple book since Walter Isaacson’s biography of Steve Jobs. However, Apple didn’t give any explicit cooperation to Lashinsky, so how much of an insight it will provide into the company is unclear as yet. 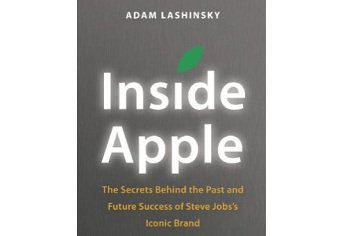 “In Inside Apple, Adam Lashinsky provides readers with an insight on leadership and innovation. He introduces Apple business concepts like the ‘DRI’ (Apple’s practice of assigning a Directly Responsible Individual to every task) and the Top 100 (an annual event where that year’s top 100 up-and-coming executives are surreptitiously transported to a secret retreat with company founder Steve Jobs),” the book’s description page reads.

“Based on numerous interviews, the book reveals exclusive new information about how Apple innovates, deals with its suppliers, and is handling the transition into the Post Jobs Era. While Inside Apple provides a detailed investigation into the unique company, its lessons about leadership, product design and marketing are universal. Inside Apple will appeal to anyone hoping to bring some of the Apple magic to their own company, career, or creative endeavour.”