Twenty-one percent of information workers questioned by market research firm Forrester are using one or more Apple products in their job.

Forrester‘s Apple Infiltrates The Enterprise report, released today, also found that almost half of enterprises it surveyed are issuing Macs to at least some employees and they plan a 52 percent increase in the number of Macs they issue in 2012.

The company surveyed some 10,000 information workers (workers that use a computer for work an hour or more per day) across 17 countries globally and more than 3,350 IT hardware decision-makers in North America and Western Europe.

The research was inspired by Forrester’s Frank Gillett, who said he had noticed “an increased presence of Apple products in public spaces and workspaces in the last few years”, even among “large established tech vendors, where corporate IT usually doesn’t support them”. 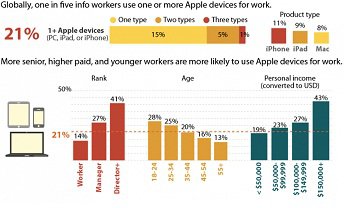 While 21 percent of those questioned use Apple products at work, five percent use two types of Apple product, with one percent using three types. Of those who use an Apple product it is most likely to be an iPhone, though the iPad is more commonly used than Macs.

However, it’s the younger members of staff who are more likely to use Apple products, with 28 percent of those in the 18 to 24 age bracket having an Apple device, while only 13 percent of the over 55s do.

Earlier this week, Good Technology released a report that showed the iPhone to be by far the most popular mobile device among financial services and professional services firms.