We’re used to interviewing people queueing outside the Apple Store to buy new iPads and iPhone on launch day, but this year we were able to catch up with some experienced queuers over a drink or two before they headed over to take their place in the queue about 59 hours before the New iPad was set to go on sale.

We’ve met Craig Fox and his queuing mates Mike Roberts and Daniel James on a number of occasions. Fox and his team masterminded MyGreatFest recently renamed Jailkbreakcon, the first ever jailbreak convention in the world. MyGreatFest took place in London last year, and Fox has plans to take the conference to San Francisco this year in the hope that his event could become a sort of WWDC for Cydia, which is the jailbreak community’s equivalent of the App Store.

For Fox and his team, the Apple Store queue is a great opportunity to gain a new product for free (inevitably someone will give Fox and his partners money to buy a new device, and will give them enough extra cash to buy a device of their own for their trouble). There is also money to be made in PR for the various companies that ask them to promote their products in front of the cameras. And of course, Fox also sees the queue as a great place to raise awareness for his own cause.

As a seasoned Apple Store queuer, we asked Fox for his tips for anyone thinking of heading out to an Apple Store in time for the iPad launch on Friday. 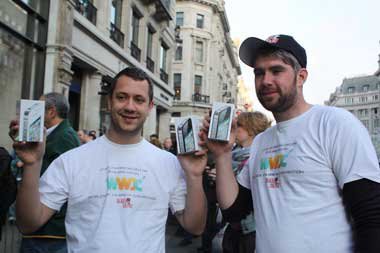 Picture caption: Craig Fox and Daniel James celebrate being some of the first to get their on the iPhone 4S

Macworld: What are the essentials that anyone planning to queue should bring with them?

Craig Fox: A sleeping bag. Jumpers. A chair to keep off the ground, so you don’t get piles. And company, so you aren’t by yourself. You also need entertainment so make sure your devices are fully charged and bring your charger. Luckily Apple lets you charge your devices inside the Apple Store. We can also use Apple’s WiFi.

Macworld: So Apple is kind to you?

Craig Fox: Apple is very accommodating. They let us go in and charge devices. They bring us water.

Macworld: What other perks do you get?

Craig Fox: In the past people have bought us pizza, and curry complete with naan bread! App developers have paid us to wear T’shirts promoting them. And I haven’t paid for a device in three years! People give me money to buy one for them and one for me.

Macworld: How does that work? How do you arrange the handover?

Craig Fox: I normally give them my bank card or iPhone to hold while I go into the store.

Macworld: What is the best thing about the experience?

Craig Fox: On launch day when the Apple guys are giving you high fives, the atmosphere is brilliant, no matter how exhausted you are the adrenalin from the clapping is amazing. I’m completely, absolutely, addicted!

Follow Craig Fox @flawlessfox and his queue buddies Daniel James @daniel277 and Mike Roberts @mroberts531 on Twitter to get the news from the queues.