Macworld got up early this morning to visit the Apple faithful standing patiently in line for the new iPad, or iPad 3.

The queues for the new iPad seemed more contained than in previous years; the Covent Garden store had separated the queuers more neatly than at the iPhone 4S launch, with the majority corralled further down the street and only the hardcore outside the store itself. This was presumably pleasing to local residents and business owners, but made the atmosphere seem less bustling and frenetic. Blue T-shirted Apple employees did their usual enthusiastic best to generate plenty of whoops and claps, but unlike at previous launches it really felt like 7.59am on a weekday morning.

David Price, the editor of sister magazine iPad & iPhone User, spoke to the man at the front of the queue at the massive Covent Garden Apple Store, whose name was Deepak.

Deepak, how long have you been waiting?

I’ve been waiting here since Thursday morning, 1am. So about one day and seven hours.

Has it been pretty tough then?

It’s been pretty tough since the weather got very chilly, very hard. But I wrapped up warm, so that makes it better than last year.

Anybody tried to steal your place?

There are people who sit in front of you, but I tend to remember who they are, and Apple staff remember, so it’s not really too much of a difficulty.

Which model of iPad are you going to get? 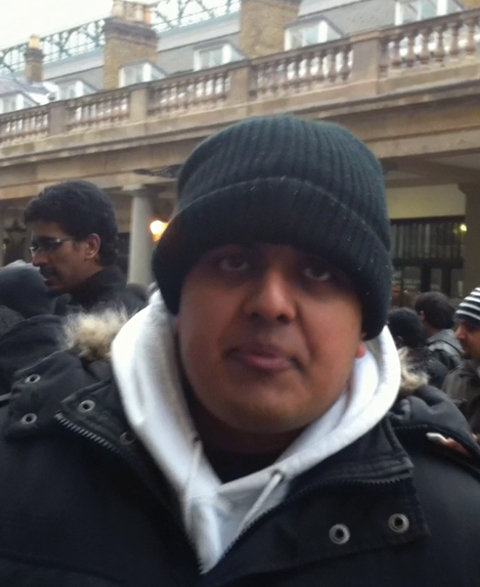 Are you excited about it?

Is this the third iPad you’ve bought? Have you bought every one of them?

I’ve not had the first one. I’ve got the second one. The main thing I’m looking for is the Retina display. And the only reason for that is so I can watch my movies, and play my games, using the extra graphics processing power that it has. Watching that in clear HD resolution.

Want to read more about Apple’s new iPad? The latest issue of iPad & iPhone User,  available right now on Newsstand, has hands-on testing of the new features, pictures, availability info and in-depth Q&As to help you decide which model is right for you.