We headed down to the Apple Store on London’s Regent Street to chat to the dedicated Apple fans waiting patiently to get their hands on the new iPad, which went on sale at 8am this morning.

First in line was Zohaib Ali, who had been waiting since Saturday afternoon. Zohaib told us he would be buying a 64GB 4G white iPad, as well as a second iPad for his Dad. He’ll be selling his iPad 2 to his Mum.

Zahaib is most excited about the 1080p capabilities of the new iPad, and the improved camera, as he uses his iPad for filming and watching videos. Zahaib mentioned that he is still very sad about Steve Jobs death, but he thinks that Tim Cook is doing a good job as CEO of Apple. Zahaib was third in the queue for the iPhone 4S. 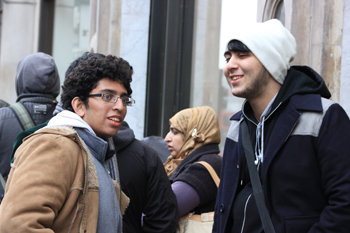 (Above: Zahaib and his friend about to enter the Apple Store)

Next in line were some familiar faces. Mike Roberts, Craig Fox, Andrew Brackin and Ben Cook had been waiting since midnight on Tuesday 13 March and call themselves experienced queuers, as they also queued for the iPhone 4, iPhone 4S and iPad 2.

The four men told us that they’d be buying WiFi only models, the 32GB or 16GB versions but they hadn’t decided on the colour yet. They’re most excited about the Retina Display, and 17-year-old Andrew told us that he’s planning on using his new iPad as a ‘post-PC device’, so that he doesn’t have to take his MacBook anywhere. 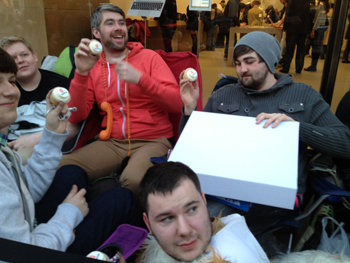 (Above: Mike, Andrew, Craig and Ben are happy with their free food, provided by various places such as Dominos, and here, some cupcakes from Griffin)

Mike said he thinks that the 4G aspect of the new iPad is ‘a bit of a con’, and makes the new tablet ‘slightly redundant’. He told us that he had booked a week’s holiday from work to queue for the iPad, and Andrew mentioned that he’s a student, so he could do all of his work from the queue. They sold their iPad 2s before coming to queue for the new iPad. 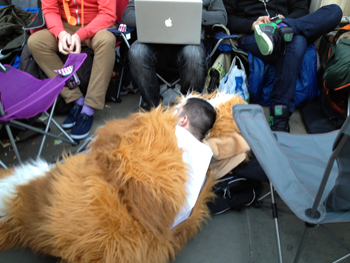 Ben was wearing a cat costume, the same one he has worn in the Apple Store queues before. When we asked him why he said: “For a laugh.”

Overall, the men agreed that the name of the iPad “really doesn’t matter” and they think that all Apple products in the future will follow the same naming conventions, scrapping numbers all together. They think the decision to scrap the iPad 3 name and settle with just iPad could have been influenced by the fuss caused by the iPhone 4S, but they said that they “don’t know what everyone’s getting so hung up about”.

Just behind were a team of five people being paid to work shifts in the queue. We’re told they’ve been waiting for 6-8 hours each, then heading home after their replacement arrives. They’ll be buying two iPads each, but they won’t be keeping any for themselves.

Fenola and Harry, a couple from Upminster, were waiting from 8pm on Wednesday 14 March. Looking comfortable with deckchairs, pillows and blankets, the pair told us they’ll be buying the 64GB 4G Black iPad. They choose the black models of Apple products because people tend to notice it less, they explained. 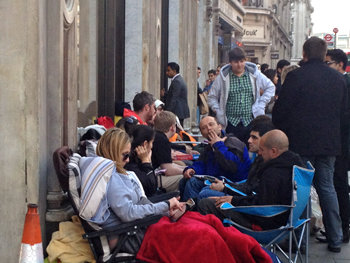 (Above: Fenola looking comfortable with pillows and blankets)

Harry explained to us that his favourite feature would have been the 4G capabilities, but  that’s not available in the UK yet, so until then it’s the Retina display. The pair queued up for the iPad 2, and they’ll be selling those iPad 2s as soon as they get their mitts on the new iPad.

Harry and Fenola would really like to see a thinner and lighter iPad next time, rather than the thicker and heavier model Apple has produced for the third-generation iPad, but they admitted that it’s a small price to pay for a Retina Display.

Just around the corner from the front-runners, we met two young men who chose not to be named (they told us they were called T-Pain and Taboo but we think that could have been a fib). They said that they were originally 5th and 6th in the queue, but they sold those spots for £300 each, only to join the back of the queue again at positions 19 and 20. They told us that they would also be selling those spots for the highest offer, which they thought would be around £160.

The boys said that they would also head down to PC World at 12.01 to snatch up the new iPad before the others in the Apple Store queue, and sell those iPads to people at the back of the queue. They won’t be getting an iPad for themselves for a few weeks, and they’ll be giving their iPad 2s to their Mums (just in time for Mother’s Day on Sunday).

When they do eventually get their new iPads, they’ll be buying WiFi only models, and will tether with their iPhones to get 3G when they need it. Overall, the reason they queue is for fun, and for easy money. They queued in October for iPhone 4S too.

Behind the boys was Gary, who arrived at 1pm on Thursday 15 March after getting permission his wife, who is expecting a baby. Gary purchased a 64GB 4G white iPad for himself, and one for his boss. Gary is an iOS developer, and he said that he’d be taking his brand new iPad to his labs straight away to begin updating his apps so they’re optimised for the new iPad. He said that the footprint of applications will increase 4 to 5 times, but ‘that’s not a killer’. He thinks that the 16GB new iPad and iPad 2 are still worth buying, because customers purchasing those models won’t be power users and shouldn’t need too much extra space.

Gary queued for the iPhone 4S, and says its nice to see the familiar faces again this year. As well as enjoying queuing experience, Gary’s ulterior motive was promoting his app Zombify Me. Gary mentioned that he had attended the Worldwide Developers Conference and had the opportunity to see Steve Jobs in person, and he thinks that Tim Cook did a good job at the iPhone 4S keynote and the new iPad keynote, considering the circumstances with Steve Jobs.

For more on the new iPad launch day, check out our Photo Stream, and our visit to the Apple Store in Covent Garden