While the increased resolution of the new iPad’s screen is impressive, the colour saturation is also responsible for the display’s “wow” factor, according to a new analysis.

Display calibration software provider DisplayMate has published its findings of a detailed examination of the new iPad and praises Apple for realising that “a top notch display is the key to a successful product” – a fact which it belives other tablet manufacturers are yet to latch on to.

“The Apple Retina Display is pure marketing brilliance. While the enhanced screen resolution is getting most of the attention, the enhanced colour saturation is equally responsible for its wow factor. These are the two wonders of the new iPad,” said Dr Raymond M Soneira, the President of DisplayMate Technologies Corporation.

DisplayMate ran comparative tests between the new iPad and the iPad 2, as well as the iPhone 4S, in a number of different categories: Screen Reflections, Brightness and Contrast, Colours and Intensities, Viewing Angles, Display Backlight Power Consumption, and Running Time on Battery. 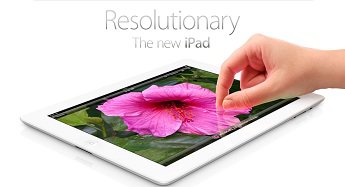 “The new iPad has a virtually perfect 99 percent of the Standard Color Gamut (a 38 percent improvement over the iPad 2). The colours are beautiful and accurate due to very good factory calibration – they are also “more vibrant” but not excessively so or gaudy like some existing OLED displays,” Dr Soneira concluded.

The very accurate colours and picture quality, he adds, mean that the new iPad is likely to be the best quality display you own, unless you happen to own a calibrated professional display. In fact, with just some minor calibration tweaks the new iPad would qualify as a studio reference monitor, Soneira says.

However, DisplayMate’s overall conclusions make it clear that there is still plenty of room for improvement in the new iPad.

“While Apple has zeroed in on sharpness and done an excellent job of it, and improved the color saturation and color accuracy to an impressive level, there are still plenty of other very important display issues that need to be addressed by all of the Tablet and Smartphone manufacturers, including Apple,” Soneira said.